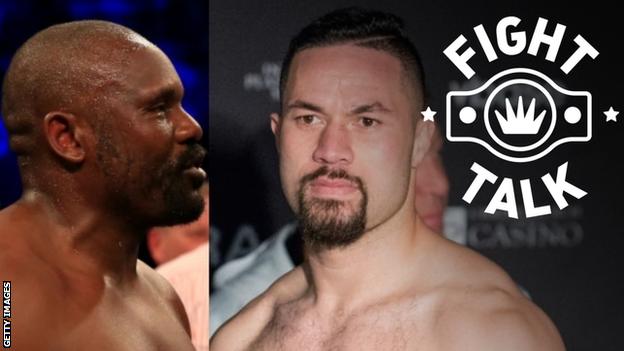 Big-time boxing is back as Derek Chisora clashes with former world champion Joseph Parker on Saturday – an intriguing heavyweight clash, but who wins?

That’s just one of the stories we look at in this week’s Fight Talk.

Also making the headlines: Katie Taylor is one the biggest stars in the sport but will Natasha Jonas rewrite the script?

Plus, a somewhat forgotten American heavyweight is back in training and boxing fans react to news Floyd Mayweather’s exhibition bout against Logan Paul looks set for June.

Last week, promoter Eddie Hearn told IFL TV a date and a city had been agreed with both camps and it was now about “dotting the i’s and crossing the t’s” and this week he said “it is on the doorstep, ready to be delivered”.

So rather than wait for the ink on Hearn’s paper to dry or for the postal round, we’ll instead focus on a huge night of boxing this Saturday at the Manchester Arena.

In the main event, British heavyweight fan favourite Derek Chisora – who is rarely in a dull fight – will take on former WBO heavyweight champion Joseph Parker.

Remember, this is a fight which was agreed via a video callâ¦

“Hello, sunshine” – could Parker be the nicest man in boxing?

We know what to expect from Chisora: no nonsense and relentless pressure.

Always the entertainer, he once bizarrely told opponent Dillian Whyte he would “go through him like laxatives”, but his words this time round are slightly more philosophicalâ¦

Chisora is coming off the back of a loss to Ukraine’s Oleksandr Usyk, the 10th defeat of the Londoner’s 42-fight career.

Is this a must-win fight for 37-year-old Chisora? We seem to say that each time he fights.

If it is the end, Celebrity Masterchef may come calling…

Parker, a technically astute boxer, has fallen out of world-title reckoning since suffering consecutive defeats by Joshua and Whyte in 2018.

Under the guidance of new trainer Andy Lee, he has been training in Morecambe alongside WBC champion Fury…

So who wins? It’s a close one and you can make a case for both fightersâ¦ 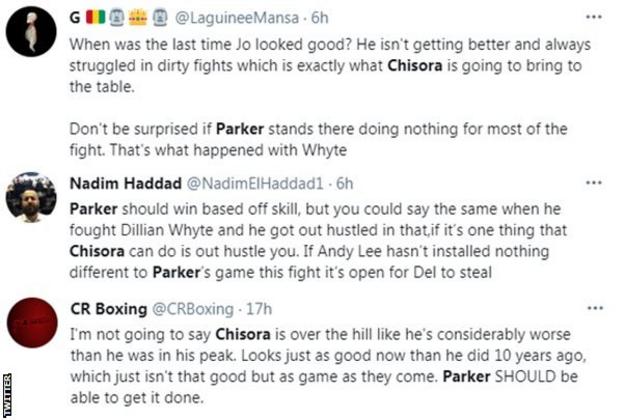 Will Taylor-Jonas steal the show?

As excited as we are about Chisora-Parker, there is a match-up which may just steal the show in Manchester.

It’s been nine years in the making, but the rematch is on as Katie Taylor, the fighting pride of Ireland, defends all four of her world lightweight titles against Liverpool’s Natasha Jonas.

Taylor beat Jonas at the London 2012 Olympics and went on to win gold. Since turning professional and winning all 17 bouts, she has become one of the biggest names in women’s boxing – although American Claressa Shields has a thing or two to say about that.

Jonas’ resilience and determination to succeed cannot be questioned. A fighting mum to daughter Mela, she has rebuilt her career after a shock defeat by Brazilian Viviane Obenauf in 2018.

Last year, Jonas showed she is a world-level fighter after drawing her WBO super-featherweight title fight against Terri Harper.

And while Taylor may go in as the heavy favourite, Jonas will no doubt be ready, having been training under Mela’s watchful eyeâ¦

Former WBC champion Deontay Wilder is back in the heavyweight game.

The American lost his belt to Tyson Fury in 2020, criticised and sacked his assistant trainer Mark Breland for chucking in the towel, blamed the defeat on his walk-on outfit and later accused his opponent of glove tampering, a claim Fury denies.

Since then, Wilder has kept a relatively low profile with fans wondering when – or even if – we’d see him return to the sport.

Well his self-imposed hiatus seems to be over, with Wilder training with former foe Malik Scott, who he beat in 2014â¦

Others have not been as welcomingâ¦

And we’ll leave you with news that will undoubtedly stir up some of the boxing traditionalists. The exhibition bout between former pound-for-pound king Floyd Mayweather Jr and YouTuber-turned-boxer Logan Paul looks set for 5 June in the USA.

According to The Athletic, Mayweather will have to stick to a weight limit of 160lbs, with Logan’s set at 190lbs.

One of them is a five-weight world champion who retired with a record of 50-0.

The other has had one professional fight against fellow social media star KSI, which he lost.

The relaxing of the weight regulations does very little to make this a fair contest.

But while the conversations on whether this is good for the sport or not will continue, there is no doubt that the bout will generate a huge amount of interestâ¦ and moneyâ¦