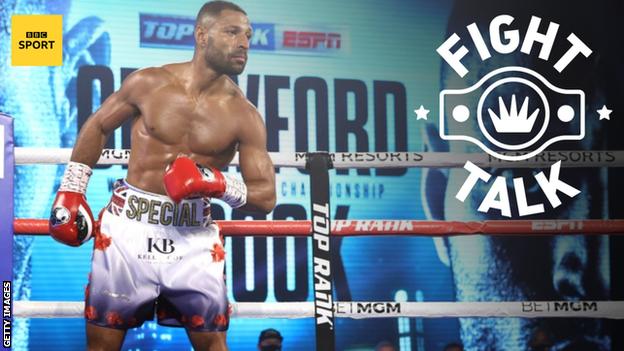 In this week’s Fight Talk, we discuss whether Kell Brook will hang up the gloves after losing to Terence Crawford in Las Vegas on Saturday night.

We also look at Katie Taylor’s options after a dazzling display in Wembley, Terri Harper’s victory with a broken hand and the tributes to retired heavyweight Dave Allen – plus we find out which Oscar-winning British film icon has a gripe with Nevada’s boxing commission.

The former IBF welterweight champion was stopped in the fourth round by American pound-for-pound star Terence Crawford in Las Vegas on Saturday.

Brook, 34, went into the fight as a huge underdog but the Briton was in incredible shape on fight night.

He was winning on the judges’ scorecards before Crawford turned up the heat with a clinical stoppage.

The Sheffield boxer has now suffered three losses in 42 fights, having been defeated by Kazakhstan’s Gennady Golovkin in 2016 and American Errol Spence Jr the following year.

BBC Radio 5 Live’s boxing commentator Mike Costello believes Brook’s career is “all over at the elite level” and the fighter himself has hinted that it may now be time to hang up the gloves.

“I have to speak to my family. It might be the end of the road,” Brook told Fight Hype.

If this is the end, Brook has treated fans to some great fight nights over the years, none more so than his superb 2014 win over Shawn Porter on American soil to capture the world title.

Brook may be finishing his career with a few ‘what ifs’ – he never really built on that momentous win over Porter and his career stalled after the losses to Golovkin and Spence.

Perhaps one of the biggest regrets, certainly for British fans, is that a mega-fight between Brook and bitter rival Amir Khan never materialised.

Does Crawford need a bigger profile?

As for Crawford, the 33-year-old WBO welterweight champion has now won all 37 of his professional fights.

It was another impressive performance from the three-weight champion…

So how did Crawford celebrate the win? Indulge in a takeaway after months of dieting? Some drinks with his team?

He may be one of the most successful active fighters out there, but Crawford needs to do more to increase his profile, according to promoter Bob Arum.

With his Top Rank contract expiring in October 2021, there’s no guarantee it will be extended.

“The question is, ‘Do we want to keep him?’ I could build a house in Beverly Hills on the money I’ve lost on him in the last three fights,” Arum told The Athletic.

Who should Katie Taylor fight next?

Katie Taylor is a superstar.

The Irish undisputed lightweight world champion, from Bray, defended her belts with a points win over Miriam Gutierrez at London’s Wembley Arena on Saturday.

Taylor moved to 17 straight wins in the professional ranks. From the get-go, it was evident she was levels above her Spanish opponent. The intensity and ferociousness of Taylor’s work – plus her hand speed – was clear to see.

This former champion was impressed…

So what next for Taylor?

A bout against Puerto Rican seven-weight world champion Amanda Serrano would provide an opportunity to cement her legacy.

The two were supposed to fight earlier in the year but the bout was called off because of Covid-19.

It’s a match-up that appeals to Taylor’s trainer Ross Enamaitm who told Sky Sports he believes Serrano is “ducking” the fight.

A fight with Northampton’s Chantelle Cameron, a world champion a division higher, is one to whet the appetite of British and Irish fans.

Fast footwork, excellent jab and a clinical finish; it was arguably the best performance of her 12-fight career.

And to make it all the more impressive, the 24-year-old from Doncaster fought for half of the bout with a broken hand…

‘The best decision you’ve made’

Heavyweight Dave Allen retired from boxing this week at the age of 28, announcing his decision with this emotional Instagram post…

Allen charmed fans with his no-nonsense style, gaining a reputation as a fighter who was willing to take a punch in order to give one.

And finally, here is the most bizarre (yet equally brilliant) social media post of the week.

On the undercard of Crawford-Brook, Australia’s Andrew Moloney was controversially denied a world title in his WBA super-flyweight bout against American Joshua Franco.

At the start of the third round, ringside doctors ruled that Franco could no longer continue because of a swollen eye and the fight was declared a no-contest because of an accidental headbutt.

The Nevada Athletic Commission spent almost half an hour reviewing the replays, before upholding the no contest decision.

Moloney, understandably, was not happy.

Nor was…. Dame Helen Mirren?!

Oscar winner and national treasure, Dame Helen posted this on her Instagram…

As far as we know, the 75-year-old has never before expressed an interest in boxing.

If we’re being pedantic, the photo she posted was actually of Moloney’s brother Jason, also a boxer.

But we’ll let that slide… if Dame Helen agrees to belt out Neil Diamond’s ‘Sweet Caroline’ from the top tier of the O2 Arena when fans return to big-time boxing.

Lockdown muscle loss: Five ways to get back in shape

Great-grandmother, 78, faces being EVICTED from her care home today over 'unauthorised' visit

Boris Johnson: “Our door is open,” but “things are looking tough” in the Brexit negotiations

Does vanity sizing make it impossible for YOU to shop online?

Police arrest 20 people in connection with the congressional storming