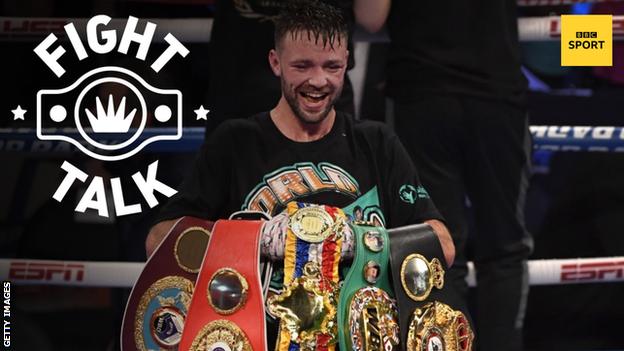 There is only one place to start in this week’s Fight Talk as we reflect on newly-crowned undisputed light-welterweight champion Josh Taylor’s stunning win in Las Vegas on Saturday and discuss who the Scotland star could face next.

We also look back on a big week in the heavyweight division with the Tyson Fury and Anthony Joshua clash now almost certainly postponed, and we find out which current world champion has called out a YouTuber.

‘The Tartan Tornado’ blows us away

In the early hours of Sunday morning, British boxing gained a new superstar as Scotland’s Josh Taylor cleaned up the light-welterweight division with a points win over Jose Ramirez in Las Vegas.

Going into the fight, boxing purists were already a bit baffled as to why the unbeaten Taylor – who won a world title in just his 15th fight – was still relatively unknown to the casual sports fan.

Taylor’s performance earned the praise of legendary fighters, a WWE wrestler and even a politicianâ¦

What’s next for Taylor?

Taylor has achieved so much in just 18 professional fights.

And even more remarkable is that the accumulative record of his last six opponents before they faced him stood at 136 wins and one loss.

So where does ‘The Tartan Tornado’ go from here?

The most lucrative next step would be to move up to welterweight and face American star Terence Crawford.

Crawford has won all 37 bouts and himself became undisputed 140-pound champion in 2017, before moving up a division and winning the WBO belt.

He has already beaten Britons Ricky Burns, Amir Khan and Kell Brook but it is a fight Taylor won’t shy away from.

“I think two undisputed champions going at it at 147 pounds would be awesome,” he said.

Taylor has also previously said he’d love to fight Filipino legend Manny Pacquiao, a man he idolises and even named his dog after.

But the 42-year-old is set to take on the USA’s WBC, WBA and IBF welterweight champion Errol Spence Jr in August.

Another potential blockbuster bout for Taylor could be against Teofimo Lopez who is unified champion at lightweight.

Lopez became one of the biggest names in and around the division after he beat Ukrainian star Vasyl Lomachenko last year.

The 23-year-old American is defending his WBA (Super), IBF and WBO belts against Australia’s George Kambosos Jr next month.

Gervonta ‘Tank’ Davis holds the WBA (Regular) lightweight belt and – with 23 knockouts from 24 wins – the unbeaten American could also be a future opponent for Taylor.

Taylor has a lot of options, particularly with those big names from across the pond, but the most likely opponent for him next is someone a little closer to home.

Chorley fighter Jack Catterall is mandatory for the WBO belt and, unless Taylor decides to vacate the belt, that is who he will face next.

Despite being unbeaten in 26 fights, Catterall will go in as a heavy underdog.

But he’s ready for the challenge…

So then, the heavyweight division; how quickly things can change in the space of a week, eh?

Month after month we had been telling you the undisputed heavyweight fight between Britons Tyson Fury and Anthony Joshua will be announced any day.

It was perhaps boxing’s worst kept secret that Saturday 14 August in Saudi Arabia was the date and location.

But then American Deontay Wilder put a spanner in the works after he won an arbitration hearing stating he had a right to a third fight with Fury.

Then last week Fury and Joshua aired their dirty laundry in public with a fiery Twitter back and forth.

And over the weekend Fury reportedly signed his contract for a third fight with Wilder, while the WBO ordered Joshua to take on mandatory challenger Oleksandr Usyk.

In summary, it’s pretty fair to assume Fury-Joshua is not happening next.

So all we can do is look forward to two heavyweight fights which will still generate a lot of interest.

Fury drew with Wilder in 2018 before convincingly winning the rematch two years later, but the rivalry between the two big men still makes the third fight intriguing.

And Joshua is up against it in former cruiserweight king Usyk, who is still a relatively unknown quantity in the heavyweight division.

You can also expect an entertaining build-up; the Ukrainian is just as good value outside of the ring as he is in itâ¦

We’ll leave this week’s Fight Talk with two brothers who are sure to rile up boxing traditionalists.

YouTuber-turned-boxer Jake Paul has caused a real stir in the sport, most recently exchanging words with Tyson Fury’s brother Tommy – a boxer and star of TV show Love Island.

But he has also caught the eye of another professional fighter – IBF cruiserweight champion Mairis Briedis. The Latvian posted this on social mediaâ¦

You can only imagine how boxing purists would react if he is handed a world title shot, though.

But maybe it isn’t completely beyond the realms of possibility, particular when you consider his older brother Logan is facing the great Floyd Mayweather in an exhibition bout on 6 June.

Logan is confident he will overcome Mayweather, and here he is attempting to emulate the great Muhammad Ali’s rope-a-dope tacticsâ¦

A 'supersensitized' brain connection may be why you hate the sound of loud chewing, study finds