When Harrison Smith finished his first triathlon, it was not the fact he was only eight years old that was amazing.

It was that his father, Alex, had carried him throughout — swimming him through 2.3 miles of cold, Danish water; towing him 112 miles on the back of his bike; and pushing him in a buggy for the final 26-mile marathon run.

This is what the love of a father will do for his dying son.

No pain, no impediment has been too great to stop Alex in his quest to save Harrison.

He raised £121,000 from sponsors for his gruelling triathlon, which he handed over to scientists at Reading University to pay for research into Duchenne muscular dystrophy. 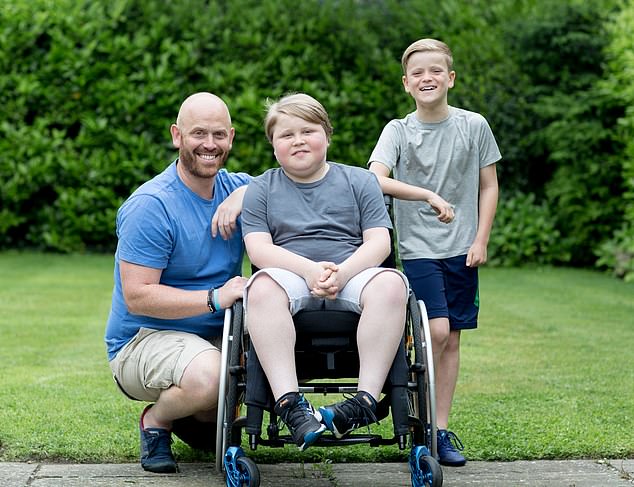 Harrison was four when he was diagnosed with Duchenne, a catastrophic muscle-wasting disease for which there is no cure. It affects every muscle in the body, to the point where those affected can no longer fully smile.

It results in children being wheelchair- bound by their early teens; they can experience heart and lung complications by their early 20s. Then they die.

Around 2,500 people in the UK have Duchenne, but it is a rare disease. There are about 7,000 such diseases in the world, which together affect 300 million people.

For most, there is no treatment, yet every year an untold number of potential new therapies, any one of which might go on to improve thousands of lives, are put aside without being tested in humans.

The reason? There is not enough money in the public or private sectors to run clinical trials on every promising discovery that comes out of research labs, especially when the result is unlikely to be profitable because so few people have the disease.

Hurried, often arbitrary, judgments have to be made about which drugs to investigate — and the rest are ditched.

According to research by the Tufts Centre for Drug Development in the U.S., up to one-third of new drugs are dropped in the earliest stages of testing for reasons that have nothing to do with their safety or effectiveness, but for broadly commercial reasons.

It is not for nothing that the process of getting drugs out of labs and into clinical trials is known by drug development specialists as ‘The Valley of Death’.

‘There’s tons of promising stuff out there, and it’s dying on the vine,’ says David Stojdl, co-founder of Jennerex Biotherapeutics, based in California.

As one researcher wryly told me: ‘We’ve probably discovered the cure for cancer twice, but we threw it out.’

In 2012, I had an idea about how to tackle the problem of these lost drugs. I didn’t know the first thing about rare diseases, clinical trials or large amounts of money — I am a biographer and a journalist, not a medic — but someone I loved was dying and I wanted it to stop.

My best friend, the biographer Dido Davies, had pancreatic neuroendocrine cancer — the same rare disease that killed former Apple co-founder Steve Jobs. There is no cure for it if surgery doesn’t work. Chemotherapy, radiotherapy; they all fail eventually.

Dido’s cancer had reappeared in the liver, so I began looking for experimental drugs to be ready for when the consultants threw up their hands in about six or seven years’ time.

Not quack medicine; nothing mentioning the word ‘energy’ or involving barium enemas. It had to be peer-reviewed science, by proper scientists. 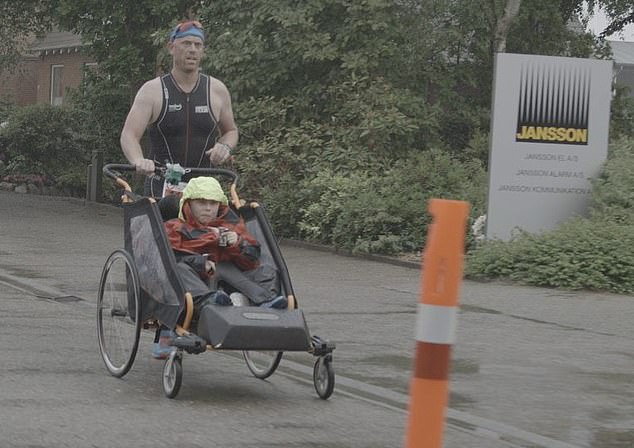 Father Alex (with son Harrison) from Esher, Surrey, set up his own charity, Harrison’s Fund, to raise money for research into treatments for Duchenne

Searching on the internet, I stumbled on a set of forgotten research papers about a virus in Sweden.

Five years before, it had been genetically engineered to attack exactly Dido’s type of cancer. But, like so many other potential therapies for rare diseases, it was lying in the back of a laboratory freezer at the University of Uppsala, Sweden.

The cost of getting the kindly bug out of the lab and into a clinical trial would be in the region of £1 million to £2 million — and no one would pay.

That’s when I had my brainwave. It was an extraordinarily simple idea, but no one had tried it before. I rang Professor Magnus Essand, the lead scientist of the Swedish virus, and explained what I had in mind.

I told him my idea was probably illegal and almost certainly unethical, but would he and the lead clinician let me try to fund his neglected work, in order to rescue it? I’d be happy go to prison for Dido if I could get her a treatment that might help.

There was a pause.

The first thing I did after hanging up was blabber. I talked to anyone who would listen; I wrote articles, went on local radio, pestered specialists.

Two brilliant patient advocates got in touch: the journalist Dominic Nutt, who had neuroendocrine cancer himself, and Liz Scarff, who runs Fieldcraft Studios, a digital marketing company, and whose mother has an inheritable form of the disease.

We met at the Weatherspoon’s pub in Victoria station and launched our campaign to rescue the lost virus over a Guinness and two pints of Adnams. Because of Steve Jobs, we called it ‘iCancer’ (iCancer.org.uk) and launched it on October 5, the day he had died. By coincidence, that was also Dido’s birthday. 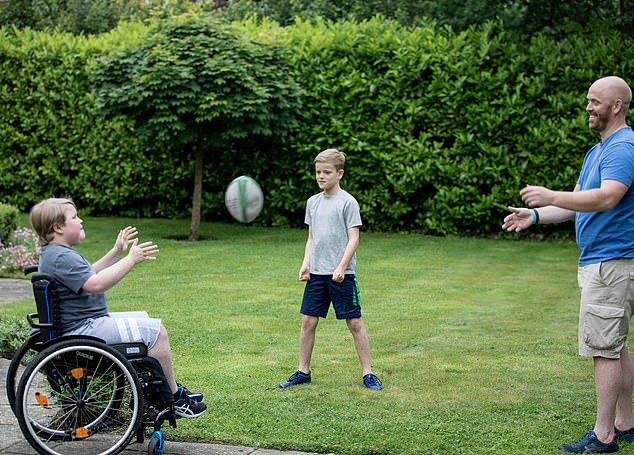 Alex and  his charity are interested in repurposing promising drugs that are already available for cancer, but not yet clinically tested for Duchenne

Liz set up a crowdfunding drive, which quickly became the most successful fundraising campaign for a clinical trial in internet history — £125,494 in a few months. But it was still not nearly enough. We began the hunt for an extremely rich patient who had the disease.

We found him sitting in a café on the shores of Lake Geneva: a 48-year-old oil man from Arizona, called Vince Hamilton. He’d read about our campaign in the Financial Times and got in touch with Uppsala University. I flew out to meet him.

‘If you pay whatever it takes to rescue this possible treatment, the clinician will offer you a place on the trial,’ I said, presenting my idea.

‘You are allowed to do this? You can buy your way on to a trial?’ said Vince.

‘If you are rescuing a drug that would otherwise be lost, and you pay for all the other patients to take part, too, and you meet the inclusion criteria then, yes, the clinician has agreed, you can do this.’

‘Two million euros for a trial that will probably fail, because 90 per cent of trials do?’ said Vince, nodding thoughtfully. ‘Those are odds, I understand. They’re about the same for an exploratory oil well.

‘Do you know of any other deals like this? I’ll do ten of them.’

For a year after Dido’s death, I hated the words ‘clinical trial’.

But time moves on: Dom, Liz and I decided to try again. It was too late for Dido, but our funding idea could help millions of others with rare diseases. It’s not been plain sailing. Our own exhaustion, our need to earn a living — but, bit by bit, we’ve pushed on our idea of a new way to fund clinical trials for the Lost Drugs.

The most successful patient saw a 50 per cent reduction in the biggest tumour in his liver. On its own, that doesn’t mean much — but it’s an encouraging sign.

AdVince has now been taken up by a new Swedish biotech company, Elicera Therapeutics, because of the trial that we and Vince and more than 2,000 patients and their loved ones from around the world paid for.

Elicera has donated 5 per cent of its shares to neuro-endocrine cancer research, by way of thanks for this patient-led rescue.

Three years ago, Dom and I wrote an essay defending our idea in the leading academic journal in the field, the Journal of Medical Ethics. No one (so far) has refuted our arguments. Several professional ethicists have come out in support.

Set the scheme up, properly monitored, and we think our Robin Hood deal could bring in billions of pounds for neglected medical research, especially for rare diseases such as Dido’s neuroendocrine cancer and Harrison’s muscular dystrophy.

With the help of researchers at the University of Warwick, we are studying the extent to which this might be a way to fund clinical trials with NHS patients.

We are running focus groups that discuss the pros and cons of this form of funding, with chairs of research ethics committees, clinical researchers and potential trial participants.

For Alex, 44, from Esher, Surrey, the day that Harrison was diagnosed with Duchenne is burned into his heart.

‘We went to the paediatrician at St George’s hospital in South London. Harrison was playing in the corner and the doctor didn’t beat around the bush.

‘He said, ‘I’m sorry to tell you it’s Duchenne muscular dystrophy. Take your son home, love him, give him a good life, he’s going to die.’ And we were ushered out,’ recalls Alex, who is also the father of William, 12.

‘I went to the car park to ring my parents and that’s when I cried like a baby. I’ve been crying ever since.’

But Alex, a branding consultant by profession, was not willing to take his son home and wait for the inevitable.

Instead, he has set up his own charity, Harrison’s Fund. Like iCancer, the aim of the fund is to raise money for research into treatments for Duchenne.

Alex’s energy and determination to save his son are nothing short of breath-taking. ‘For some rare diseases, patients have to take charge if they want to survive,’ he says.

Alex is chasing down potential new drugs for Duchenne. The more trials there are, the more likely he is to see his son cured.

He and his charity are interested in repurposing promising drugs that are already available for cancer, but not yet (because of lack of funding) clinically tested for Duchenne.

We want to supercharge the system to help Alex and many other patients and their loved ones find cures — or at least an easing of suffering — for their rare diseases.

We want to put patients before profit. If our work with the University of Warwick is successful and we can convince the NHS to participate in patient-funded clinical trials, we think we can boost medical research in the UK and across the world.

It’s too late for my friend and for Vince — but not for Harrison and the millions like him all praying for a cure.

To find out more, visit icancer.org.uk