Anna Morgan Lloyd, 49, was ordered by a federal judge on Wednesday to serve three years of probation, perform 120 hours of community service and pay $500 in restitution for her role in storming the Capitol on January 6

An Indiana grandmother who is the first of nearly 500 MAGA rioters to be sentenced for storming the US Capitol has managed to avoid a prison sentence.

Anna Morgan Lloyd, 49, was ordered by a federal judge on Wednesday to serve three years of probation, perform 120 hours of community service and pay $500 in restitution for her role in storming the Capitol on January 6.

In the aftermath of the Capitol riots, Lloyd took to Facebook to declare it the ‘best day ever’.

She ended up pleading guilty last month to a single misdemeanor charge of parading, demonstrating or picketing in a Capitol building under a deal with prosecutors.

During her sentencing, Lloyd apologized to the court, ‘the American people’ and her family saying she went to Washington that day to peacefully show her support for Trump.

‘I’m ashamed that it became a savage display of violence that day,’ Lloyd told the court. ‘I would have never been there if I had a clue it was going to turn out that way.

‘It was never my intent to be a part of anything that’s so disgraceful to our American people.’

Prosecutors had recommended probation after noting that Lloyd was not involved in any violence and destruction or preplanning and coordination of the Capitol breach.

US District Court Judge Royce Lamberth said he was giving her a ‘break’, but didn’t want others to think that probation – and not a stiffer sentence – would be the norm.

‘Some of these defendants in these cases are not gonna do what you did. They’re not gonna say they did anything wrong,’ the judge told her. 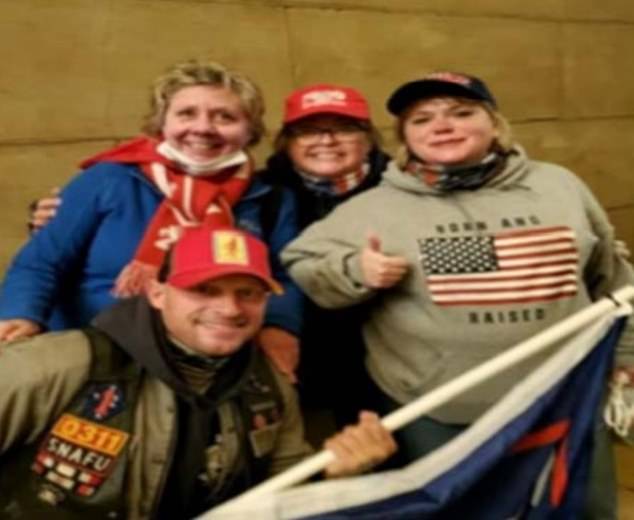 In the aftermath of the Capitol riots, Lloyd (pictured far right in the Capitol) took to Facebook to declare it the ‘best f**king day ever’ 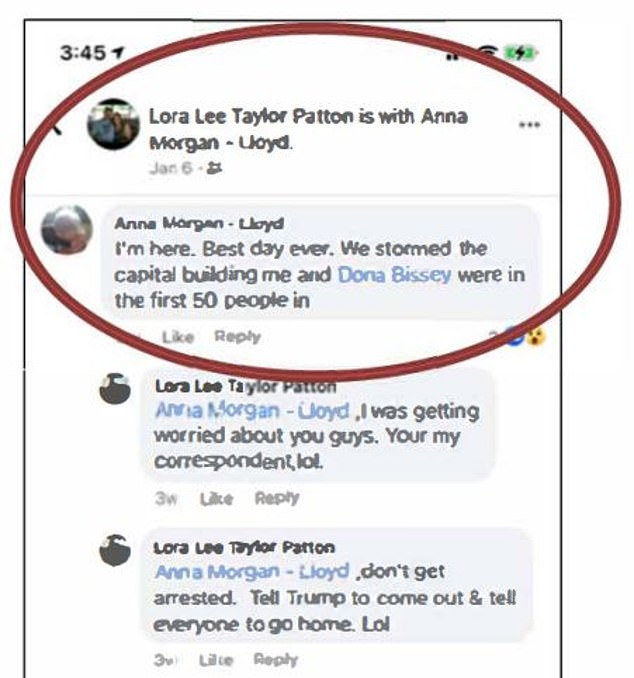 In the aftermath of the Capitol riots, Lloyd took to Facebook to declare it the ‘best day ever’

Lamberth said he struggled with what would be an appropriate sentence for Lloyd because he views the riot as a serious crime.

‘This wasn’t a peaceful demonstration the way it turned out. It was not an accident,’ he said. ‘It was intended to and brought a halt to the very functioning of our government.’

He said he was ‘especially troubled’ by some Republican lawmakers who are seeking to rewrite the history of the Capitol riot.

‘I don’t know what planet they were on but there were millions of people in this country that saw what happened on January 6 and that saw what you saw and what you just described: a disgrace to our country,’ the judge said.

He slammed some members of Congress for ‘re-writing history’ and comparing insurrectionist to ‘tourists’.

Lloyd was arrested back in February after she and her friend Dona Bissey, 52, posted photos on Facebook of themselves inside the Capitol.

She wrote in one of the posts that the riots was the ‘best day ever’.

In a letter to the judge asking for leniency, Lloyd wrote that she was a registered Democrat but that she and her husband began supporting Trump in 2016 because ‘he was standing up for what we believe in.’

After her arrest, Lloyd’s lawyer gave her a list of books and movies to help her ‘see what life is like for others in our country,’ Lloyd wrote. Lloyd said she has sought to educate herself by watching movies such as ‘Schindler’s List’ and the History Channel’s ‘Burning Tulsa’ and reading Bryan Stevenson´s ‘Just Mercy.’

‘I’ve lived a sheltered life and truly haven’t experienced life the way many have,’ Lloyd wrote. ‘I’ve learned that even though we live in a wonderful country things still need to improve. People of all colors should feel as safe as I do to walk down the street.’ 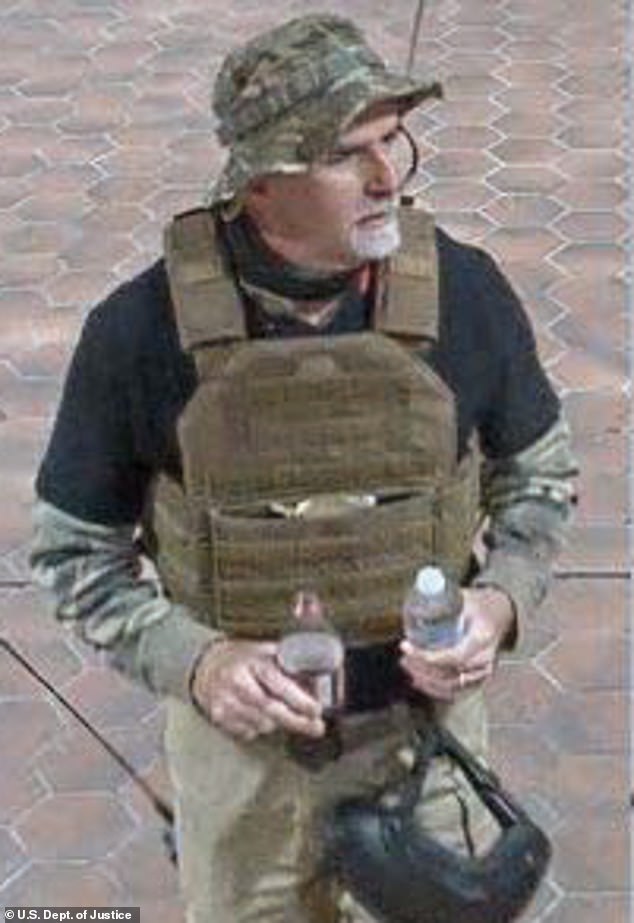 A member of the right-wing Oath Keepers militia group, Graydon Young, pleaded guilty on Wednesday to one charge of conspiracy and one of obstructing an official proceeding 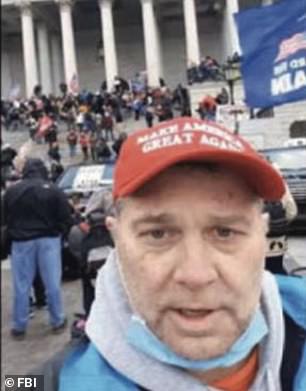 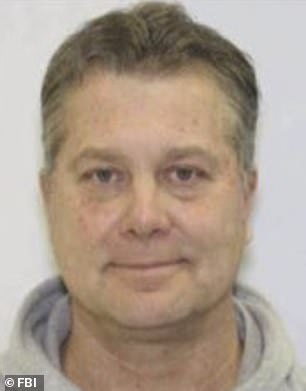 Another defendant, 55-year-old Robert Reeder, of Maryland, pleaded guilty on Wednesday to one misdemeanor charge of parading, demonstrating or picketing in a Capitol building

Lloyd is the first of the nearly 500 defendants to be sentenced for the January 6 insurrection at the US Capitol by supporters of then-President Donald Trump.

Lloyd’s sentence was handed down as a member of the right-wing Oath Keepers militia group, Graydon Young, pleaded guilty on Wednesday to one charge of conspiracy and one of obstructing an official proceeding.

The 54-year-old from Florida is one of 14 members of the Oath Keepers group charged with taking part in the riots.

He agreed to cooperate with investigators as part of his plea deal.

Questioned by US District Judge Amit Mehta about the extent of his possible cooperation, Young agreed to give grand jury testimony and to be interviewed by law enforcement investigators without his lawyers being present.

The judge did not impose a sentence at Wednesday’s hearing and allowed Young to remain on bail pending a further hearing later this summer.

His second charge calls for up to 20 years in prison, but the judge said federal sentencing guidelines call for Young to serve between five and six years behind bars. Prosecutors may seek even less time in exchange for his cooperation against other defendants.

Young was arrested in February and charged in the sweeping conspiracy case accusing members of the Oath Keepers of coming to Washington prepared to use violence and intent on stopping the certification of the vote.

Authorities say Young, wearing a helmet and tactical vest, was part of the military-style ‘stack’ seen on camera marching through the crowd before entering the Capitol building.

The Oath Keepers are a loosely organized group of activists who believe that the federal government is encroaching on their rights, and ‘explicitly focus’ on recruiting current and former police, emergency services and military members.

Another defendant, 55-year-old Robert Reeder, of Maryland, pleaded guilty on Wednesday to one misdemeanor charge of parading, demonstrating or picketing in a Capitol building.

He faces a maximum of six months in prison.

During a court hearing, Reeder’s attorney stressed that his client ‘didn’t touch anything’ or ‘destroy anything’ or ‘physically engage in any kind of resistance’ while he was inside the Capitol.

He is due to be sentenced on August 18.

More than 480 people have been arrested and charged with taking part in the unrest, which saw rioters smash windows, battle police inside and outside the Capitol and sent lawmakers and then-Vice President Mike Pence into hiding.

The riot followed a fiery speech in which Trump repeated his false claims that his election defeat was the result of widespread fraud and disrupted the formal count by Congress of electoral votes in the race.