Only 920 alligator possession permits are granted every year in the state of Mississippi, and Ty Powell, 28, of Columbia, was lucky enough to get the permit thousands apply for in his first year applying.

But Powell’s luck didn’t end there, he was able to wrangle a 13-ft long 787-pound alligator with the help of other four experienced hunters.

Once a person is drawn for alligator tags, they are allowed to hunt only two alligators within a year, and one has to be under 7ft.

Powell told DailyMail.com that he enjoyed his first time hunting alligators so much, that he will apply again for the permit next year.

‘I believe the adrenaline rush was kicked in so much I wasn’t scared.

‘Amazed would be a good word the first time he came up to the top of the water and I got a good look at him, and after over an hour battle with him dragging us up and down the river I was very worn out.

‘It took five grown men to roll him into the boat, after that we just floated down the river a good ways to catch our breath, he had all five of us tired at that point,’ Powell said about the experience. 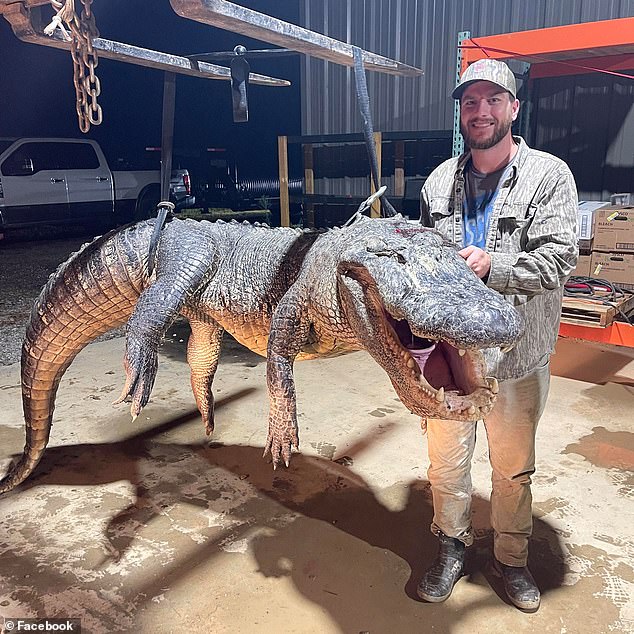 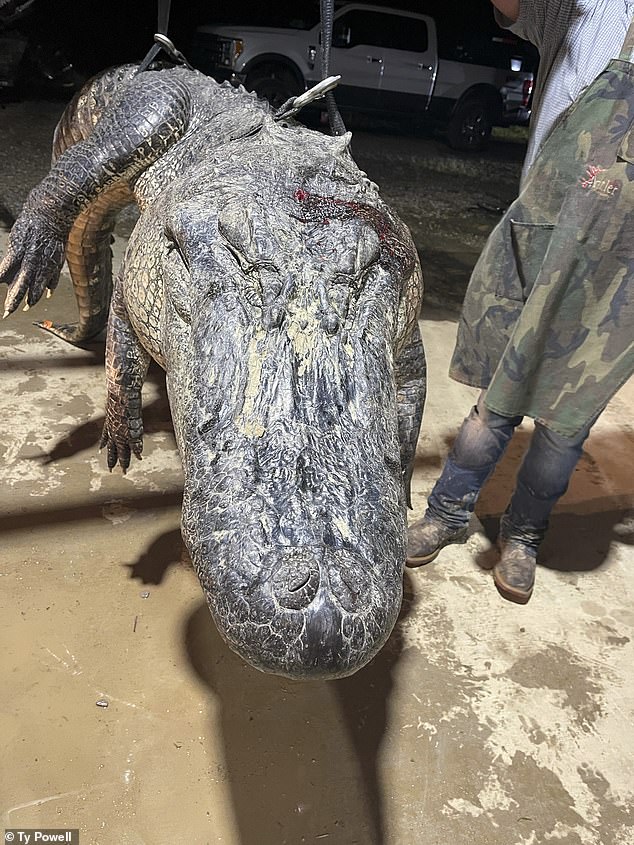 The group believed the 787-pounds alligator was the smallest of the two they had chosen to hunt. They only realized how big it was when they took the animal to a processor

He credited the other four men, who guided him through his first time hunting alligators.

On Friday night, fellow hunters Kent Britton, Adam Steen and Bubba Steen had captured another beastly alligator – one that was 12ft8in and weighed over 500 pounds, USA Today reported.

They were on the Yazoo River, in Redwood, where they had spotted more than 15 alligators.

The group had had two beasts in their sights for over a month, and had already killed the one they thought was the bigger of the two.

Powell and Eli Frierson, of Starkville, joined the hunters on their mission to capture the second alligator on Saturday night.

When they were at the spot they had marked, however, they found three small gators, so they decided to go up the river and explore around where the other gator had been seen.

Eventually, they found their target.

One of the men in the group used a rod and reel to capture the alligator and gave it to Powell, who was inside the boat, but the alligator got off.

‘It’s a little bit of helplessness,’

‘You don’t know if you’re going to get another chance at him.

‘When you feel that line loosen up real quick, it’s an ‘Oh, no’ feeling,’ Powell told USA Today.

But Bubba Steen was sure they would get a second chance, he had been in situations like that before.

‘About four or five years ago, me and Eli were on the river and had one.

‘He got off six times. We stayed after him all night.

‘We’ve had them get away before, but usually if you just stay after them and eventually he’ll make a mistake. I said, ‘Let’s stay after him and we’ll get him,’ Bubba Steen said. 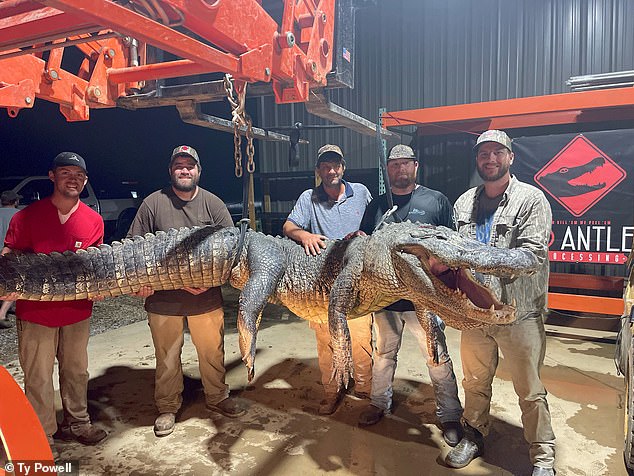 They got their second chance then, and they were hoping for one now too.

Three of the men had the alligator hooked, but they had one broken rod, one broken reel, and only one good rod on it.

After three hours of fighting, the hunters were able to move the gator closer to the boat, where they secured the animal.

It took the five hunters another 30 minutes to move it inside the boat.

They just then realized this was a much bigger alligator, and when they took it to the processor, they discovered it was 13ft2in and weighed 787 pounds.

Its belly girth was 66in and its tail girth was 48in.

He could have been even bigger, they told USA Today.

‘He was also missing part of his tail. I know 13-2 is huge, but at one time he was bigger than that,’

‘It was the hunt of a lifetime. These four guys that were with me, I can’t thank them enough for helping me get that gator,’ Powell said.

Powell is an avid hunter and says he has loved the activity since a very young age.

Argentina refuses to complete the Brazil match after trying to force their colleagues out.. Photos

Three adults and baby are shot dead and girl, 11, is wounded by body-armored gunman