Millions of families’ plans for half term this week are likely to be dampened as torrential rain is expected to move across most of the UK – and yellow flood warnings are issued for parts of Wales and north east England.

As much of the nation hunkers down under various coronavirus restrictions, unsettled autumnal weather will see out October, with heavy rain, hail, and strong winds widely expected.

Incredible pictures taken on the cliffs of Perranporth in Cornwall yesterday show two fishermen being battered by by waves and high winds as they sit precariously on an exposed ledge – more heavy rain and winds are expected for the south west moving forward.

Wales and the north east will take the brunt of the rain, with the Met Office issuing yellow flood warnings across multiple regions for Thursday and Friday – as Scotland and the far north battle winds of 50mph.

The remnants of Hurricane Epsilon are responsible for bringing the miserable conditions to most of the UK, as more rain is expected to continue east on Tuesday, reaching the far north-east of Scotland later. 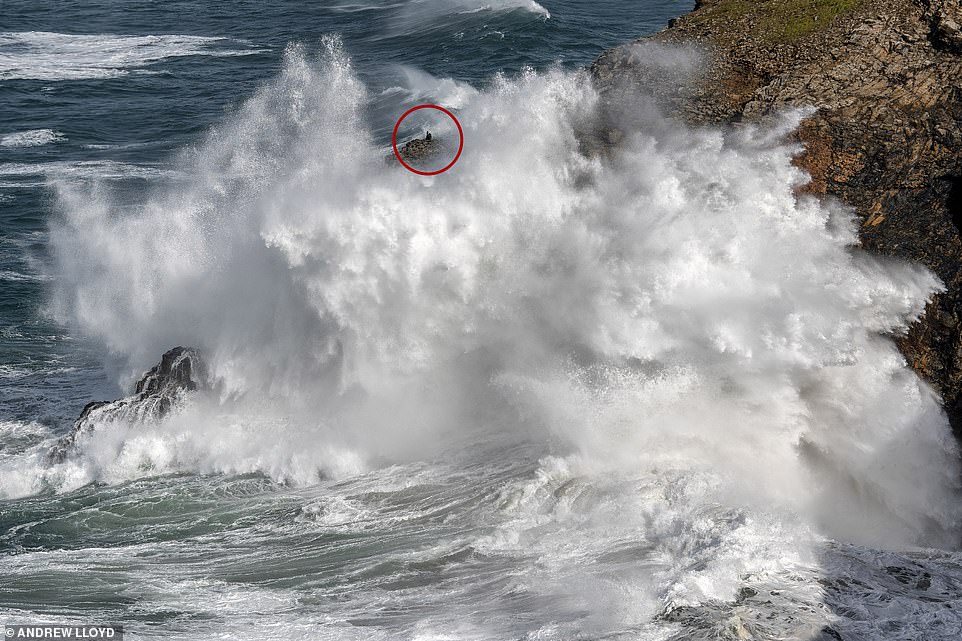 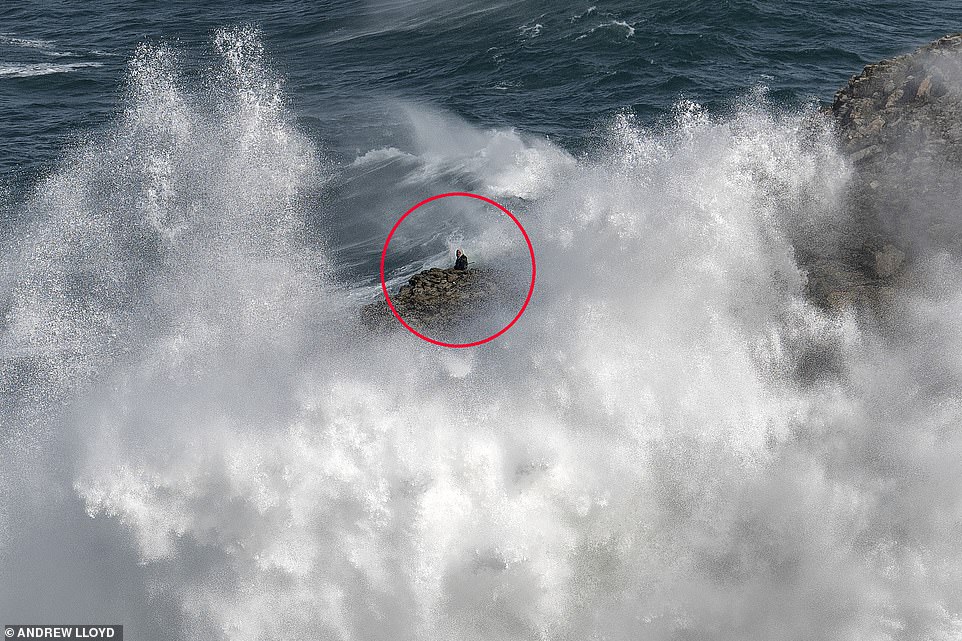 A fisherman continues to sit on an exposed ledge despite the obvious danger, on cliffs near Perranporth in Cornwall

Early in the day there may be sunny spells in western and some central parts with top temperatures of 57F (14C) expected in Cardiff and lows of 48F (9C) predicted for London, but blustery showers are expected to follow becoming heavy as the day draws on.

The temperature is expected to drop by mid-week before warming into the weekend with highs of 59F (15C) expected for much of the South east. However showers will continuing for most with very heavy rain expected for high ground in the west.

Chief Meteorologist Andy Page said: ‘Until the end of October we are looking at an unsettled spell of typical autumnal weather which will dominate the forecast. Every year we expect the remnants of decaying tropical hurricanes to disrupt conditions when they enter the North Atlantic. 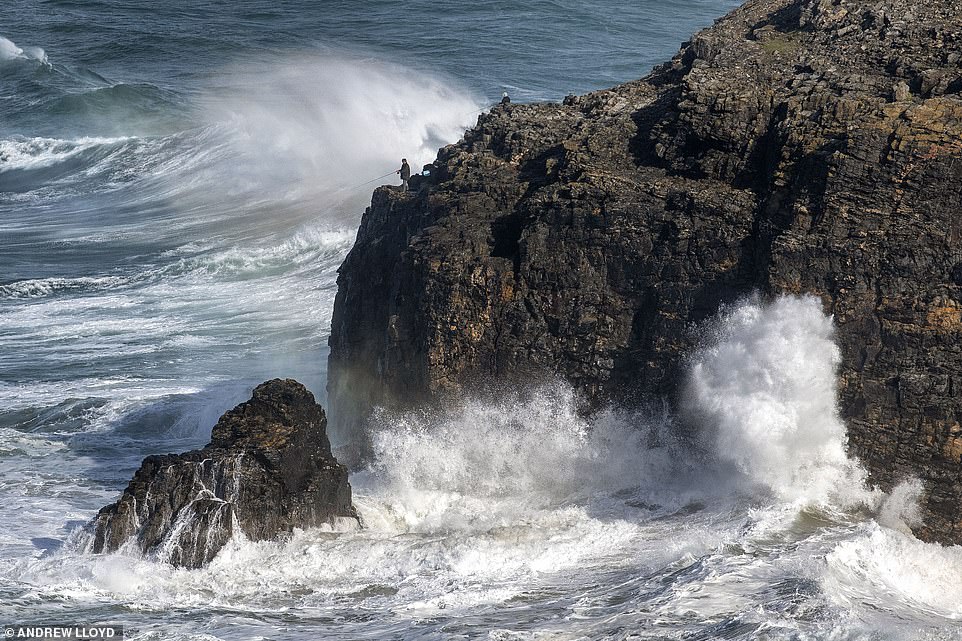 ‘The remnants of former Hurricane Epsilon have been subsumed into another deep area of low pressure to the south-west of Iceland, and although the low centre is a long way from our shores and won’t cause disruption, the trailing weather fronts associated with this system will bring wind and rain to the UK, along with a potentially heavy swell.

‘However, it is rain rather than wind that will dominate our attention later in the week with a so-called ‘warm conveyor’ set up to bring a flow of very moist and warm air to the UK from further south in the Atlantic, triggering heavy rainfall for high ground in the west of the UK.

‘We have issued a Yellow warning covering parts of Wales and North-west England for Thursday and Friday as additional rainfall in these areas may lead to impacts, including flooding. 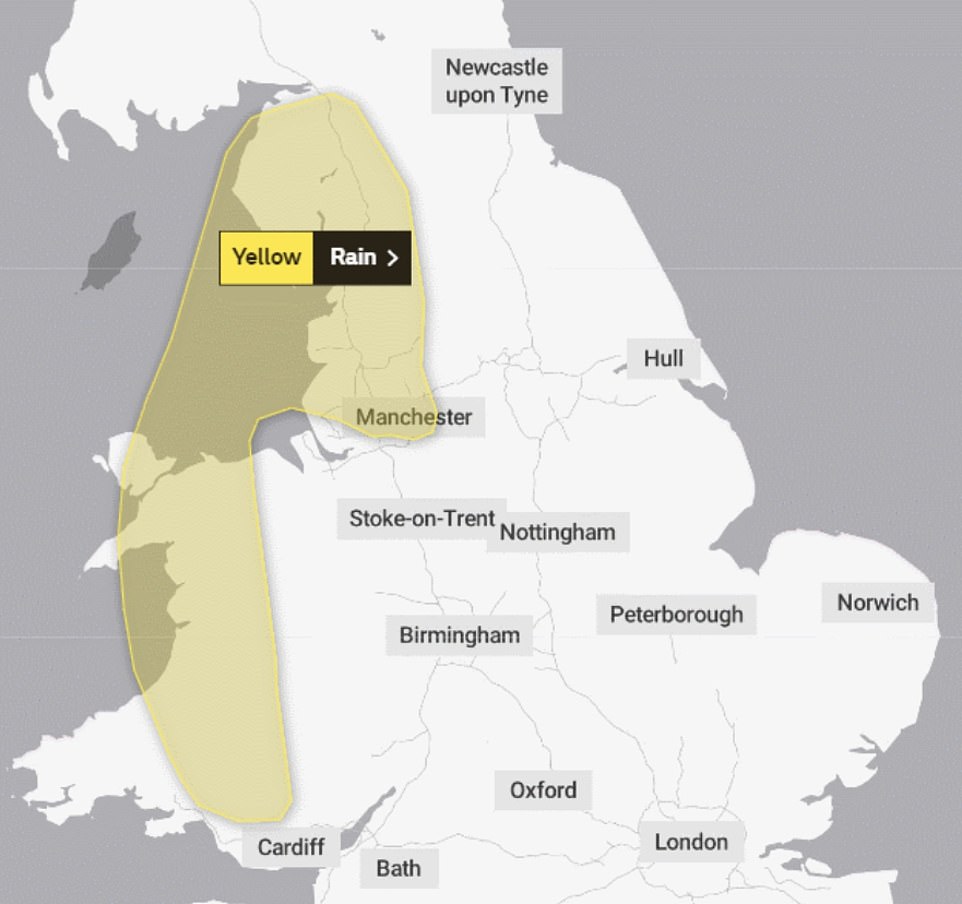 Wales and the north east will take the brunt of the rain, with the Met Office issuing yellow flood warnings across the regions for Thursday and Friday – as Scotland and the far north battle winds of 50mph

‘Across the warning area accumulations of 30-40mm of rain can be expected, while isolated areas exposed the strong south-westerly winds could see 50-80mm. We expect the heaviest rainfall to occur in the mountains of Wales where some areas could witness 130mm of rainfall.’

At the weekend, the forecast is showing potential for the remnants of ex-hurricane Zeta to move into the North Atlantic, with the associated moisture being entrained into the Atlantic frontal systems, to again bring the potential for further heavy rain to parts of the UK later in the weekend and into early next week. However, confidence at this time range is fairly low for this aspect of the forecast.

Andy Page added: ‘We will continue to monitor the situation, issue warnings accordingly, and work with partners to provide advice to the public.’

US dollar index pressured ahead of US bond auctions.