Fishmongers’ Hall killer Usman Khan was a ‘high risk’ terrorist who hid bomb-making chemicals in his cell, befriended Lee Rigby’s killer and acted as an Islamist enforcer behind bars, an inquest has today heard.

The 28-year-old terrorist also hid a razor-blade under a piece of furniture while in prison and declared that he wanted to ‘die as a martyr’, the inquest was told.

He is said to have discussed his faith Michael Adebolajo, who was one of the killers of fusilier Lee Rigby in 2013, during a meeting in 2017.

And he also asked to be moved to the segregation wing in an apparent attempt to make contact with radical preacher Abu Hamza.

Khan was released from prison in 2018 after serving eight years behind bars for a plot to blow up the London Stock Exchange and set up a terrorist training camp in Pakistan.

Khan was shot dead by police officers after witnesses chased him with a Narwal tusk and a fire extinguisher.

Today an inquest into the deaths of his victims heard how Khan had bought knives from a market stall, had a haircut and shaved his body hair in preparation for martyrdom.

It also heard a list of Usman’s links to extremism while in prison were revealed.

Among the incidents listed at the inquest were: 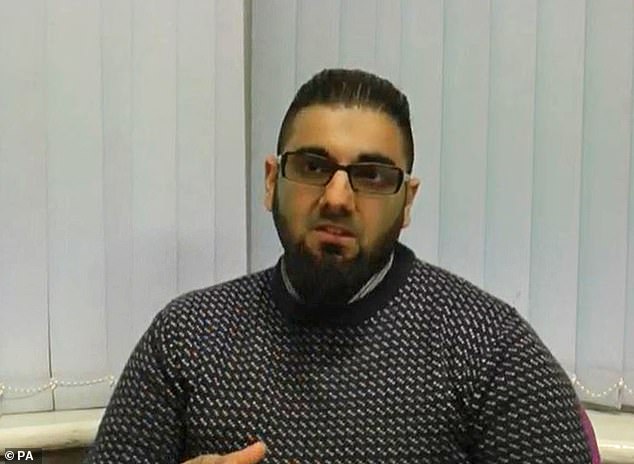 Fishmongers’ Hall killer Usman Khan (pictured) was a ‘high risk’ terrorist who hid bomb-making chemicals in his cell, befriended Lee Rigby’s killer and acted as an Islamist enforcer behind bars, an inquest has today heard 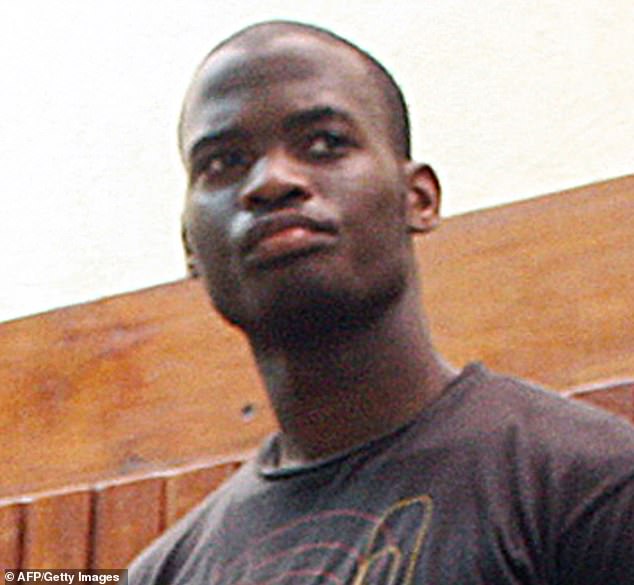 In March 2017, Khan was heard talking about his Muslim faith with Michael Adebolajo (pictured), who had killed Fusilier Lee Rigby in Woolwich four years earlier

Today Detective Chief Inspector Dan Brown of Scotland Yard’s SO15, gave details of Khan’s background and preparation for the attack as part of an investigation following the killings, code named Operation Bemadam.

Born in Stoke-on-Trent to parents who had come to the UK from Pakistan, he was described by a former teacher as having a ‘chip on his shoulder’ and ‘teenage swagger’.

At the age of 13, Khan was excluded from school after assaulting another pupil and exchanging racial slurs, for which he was given a youth reprimand, the court heard.

The court heard how Khan was attracted to extreme Islam in his teens and took an interest in prominent figures Anwar Al-Awlaki and Anjem Choudary, the leader of terrorist organisation al-Muhajiroun (ALM).

In 2008, he preached in Stoke on behalf of ALM and police raided the address where he was living, jurors heard.

Afterwards, Khan said he was born and bred in Stoke, and insisted: ‘I ain’t no terrorist.’

But within years, Khan was one of nine men from London, Stoke and Cardiff to be convicted of terrorism offences.

In December 2010, Khan discussed with another male how to construct the pipe bomb from a recipe in the al Qaida magazine Inspire, jurors heard.

Khan pleaded guilty to engaging in conduct in preparation of terrorist acts and was jailed for 16 years – of which he would go on to serve eight in prison. 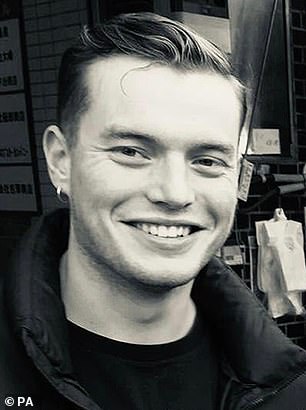 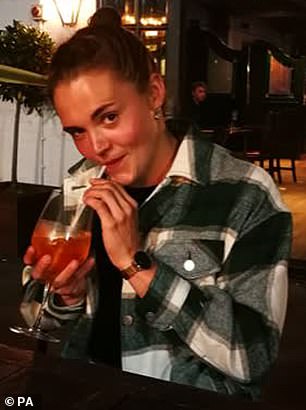 In November 2019 Khan stabbed Jack Merritt, 25, and Saskia Jones, 23, during a prisoner rehabilitation conference at Fishmongers’ Hall near London Bridge.

DCI Brown told the inquest that on January 8 2011, while in Belmarsh jail, Khan was said to have ‘insinuated that he either has or had access to a weapon and is going to do someone in the eye and that he wants to come from behind and do him in the neck and he wants to die and go to paradise.’

The following year, on June 21, 2012, having been moved to Wakefield jail, he was said to have climbed onto the netting area.

There he began reciting a poem which included the phrase, ‘cut off the kuffars [infidel’s] head’ and also stated he was a ‘trained soldier who had learned patrol techniques’. 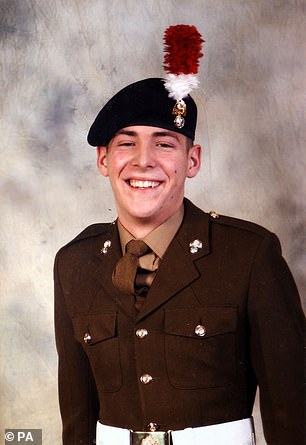 The inquest heard Khan had met with Michael Adebolajo, who had killed Fusilier Lee Rigby (pictured) in Woolwich in 2013

Khan followed it up a few days later by assaulting the same prisoner in his cell, catching a Church of England chaplain in the assault.

On November 21, a search of Khan’s cell revealed a razorblade taped to the underside of some furniture.

Back in Belmarsh, in late 2012, Khan had stockpiled Anhydrol Forte – which contains aluminium chloride, used to treat excessive sweating – and several bottles of unknown liquids.

‘That could be used in incendiary devices and it was very concerning that he was stockpiling this material, although he did not have enough to construct a bomb,’ Mr Brown said.

In Woodhill prison in Buckinghamshire, intelligence suggested that Khan was ‘known to be a Muslim enforcer in the prison,’ according to a Mercury prison intelligence report from June 18, 2015.

It was said ‘he tries to impress a higher ranking terrorism prisoner whom he is in awe of’ and also ‘tries to impress his status by influencing lower ranks, feeling like an important person as a result.’

At one point he asked to be moved to the segregation wing in an apparent attempt to make contact with the hook-handed preacher Abu Hamza, who was held there.

On July 24 2015, further intelligence suggested that Khan was leading a gang that was planning to assault staff and a prisoner was assaulted for disagreeing with the plan.

He was said to be part of a ‘bullying gang’ inside the prison and put on a regime of ‘basic’ privileges that meant he lost his television.

Intelligence also suggested that Khan had ‘extremist beliefs’ and that imams agree with him and he has not been challenged.

He was said to have declared that ‘all staff with keys are fair game.’ However, Khan also made repeated attempts at appearing to reform. 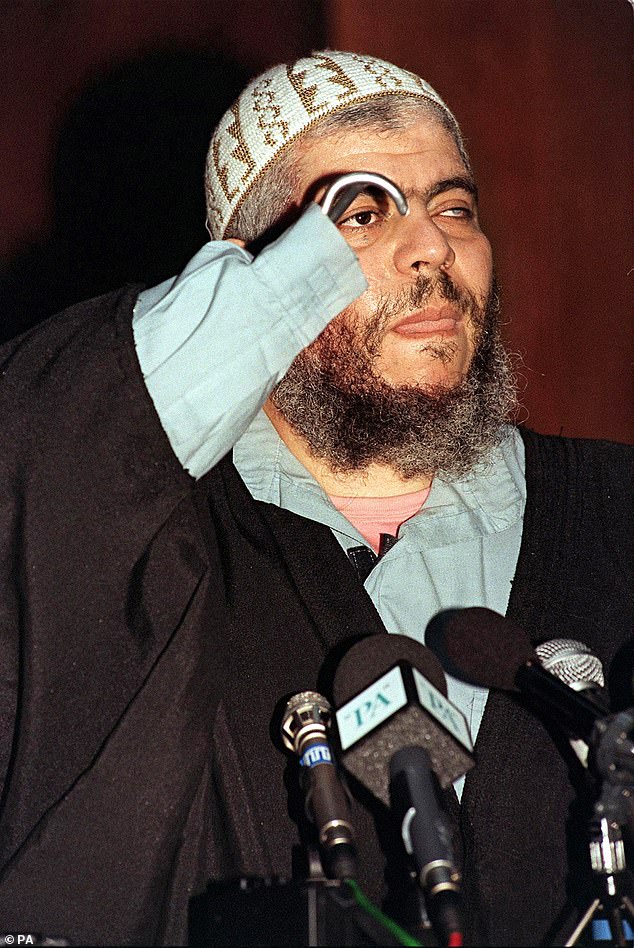 At one point Khan asked to be moved to the segregation wing in an apparent attempt to make contact with the hook-handed preacher Abu Hamza (pictured), who was held there

In August 2013 in Frankland prison in County Durham, he told a prison service interviewer that he ‘used to hold extremist views in the past but doesn’t hold them now.’

He claimed he had spoken to the imam in Belmarsh and had ‘changed how he views things’ claiming that he was ‘previously an angry teenager who got his sense of identity from Islam’.

Jonathan Hough QC, for the coroner, said that there was an ‘indication of improved behaviour and that his actions were becoming more positive’ in 2018 as his release approached.

However, intelligence from August 2016, shortly after his arrival in Whitemoor, mentioned that some prisoners were using a term called taqiyya which was said to be a ‘permissible form of telling lies to advance the cause of Islam.’

The report said that ‘some including Khan were lying in intervention programmes, in his case just ticking boxes to show he is progressing.’

Despite noting that his behaviour was ‘acceptable’ and he had no recent ‘adjudications’ the report said he had continued extremist attitude and was involved in radicalisation and the potential for serious disruption.’

It noted he had ‘told lies or ticked boxes to achieve progression.’

On February 28 2017, Khan was involved in the beating of a prisoner as two other inmates cornered him in his cell and swung a weighted sock at him while Khan pushed someone away from the door.

‘Information suggested the victim had been told to get out of HMP Whitemoor when he declined to convert, saying he was a Christian,’ the inquest heard.

In March 2017, Khan was heard talking about his Muslim faith with Michael Adebolajo, who had killed Fusilier Lee Rigby in Woolwich four years earlier.

A search of Khan’s cell on April 2017, revealed newspaper cuttings related to ISIS terrorism and jihadists and a large amount of hand written religious material.’

Months later, in June, he was involved in a ‘hostile standoff with staff’ and a report noted he was an ‘influential terrorism prisoner involved in extremist bullying.’

He was released from jail on December 24, 2018, having ended up in Whitemoor jail.

It was in Whitemoor where Khan came into contact with the Learning Together programme – who hosted the event where he committed his terrorist attack.

He was said to have engaged ‘positively’ with Learning Together, jurors heard.

The inquest into the deaths of Ms Jones and Mr Merritt continues.

Much of Italy’s cinemas, theatres and concert halls have reopened after weeks of lockdown