A fitness model who has gained a legion of followers after sharing her workouts has penned a heartfelt response to those who critiqued her body following the birth of her second child.

Emily Skye, 35, who lives in Australia, with daughter Mia, two, and partner Declan Redmond, posted snaps throughout her pregnancy and has also documented how her body has changed since welcoming baby Izaac in June.

Boasting over 2.5 million followers on Instagram, Emily revealed she’s noticed negative comments – including that her postpartum body has ‘too much cellulite’ and that it’s ‘ruined’.

Alongside a new photograph revealing her toned tummy, she explained the posts from trolls have inspired her to focus on her fitness goals and wrote: ”RIP fit body’⁣⁣⁣⁣⁣⁣⁣⁣⁣⁣⁣⁣ ‘Yuck ‘Your body is ruined’⁣⁣⁣⁣⁣⁣⁣⁣⁣⁣⁣⁣ ‘ So much cellulite!’⁣⁣⁣⁣⁣⁣⁣⁣⁣⁣⁣⁣ ‘Reminds me to never have kids’⁣⁣⁣⁣⁣⁣⁣⁣⁣⁣⁣⁣ ⁣⁣⁣⁣⁣ – Just some of the comments I’ve been receiving about my postpartum body!’ 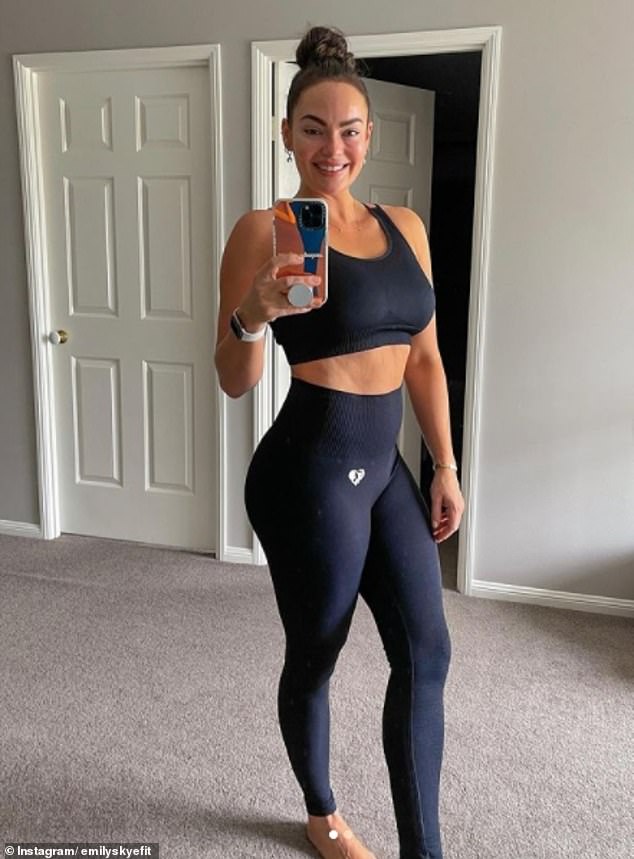 Emily Skye, 35, (pictured) who lives in Australia, has hit back at trolls for posting cruel comments about her postpartum body on Instagram 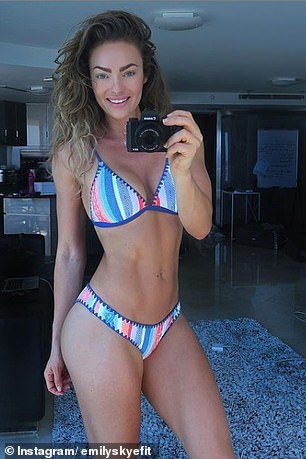 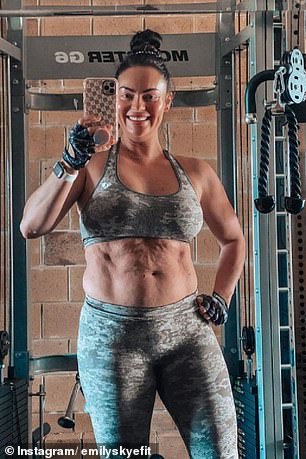 ‘You know what though? I’d rather it come from others than myself. What I think of myself and constantly tell myself is FAR more important than what others think and say to me.⁣⁣⁣⁣⁣⁣⁣⁣⁣⁣⁣⁣ I’ve said this before – I LOVE my body so much and I’m grateful for everything it has done for me and my kids!’

She continued: ‘I made a promise to myself the day I gave birth to my son Izaac (on my lounge room floor btw) that if I were to ever have negative thoughts about my body I’d remind myself of what it’s done for me and how blessed I am. I haven’t yet had to remind myself though’

Emily went on to say that learning to love her body took time – adding that she appreciated it throughout her pregnancy.

‘It makes me sad when I hear people say terrible things about the way they look,’ she explained. ‘Love for yourself and your body isn’t easy and takes time to learn how to do it, but I believe it’s SO important.

‘The best way to love your body I think is to appreciate what it DOES for you – focus on that and nourish it with nutritious food, exercise and rest.⁣⁣⁣⁣⁣⁣⁣⁣⁣⁣⁣⁣ I absolutely love being fit and strong and my current goals is to improve my fitness. That doesn’t mean I don’t love my body when I’m not at my “peak” though. 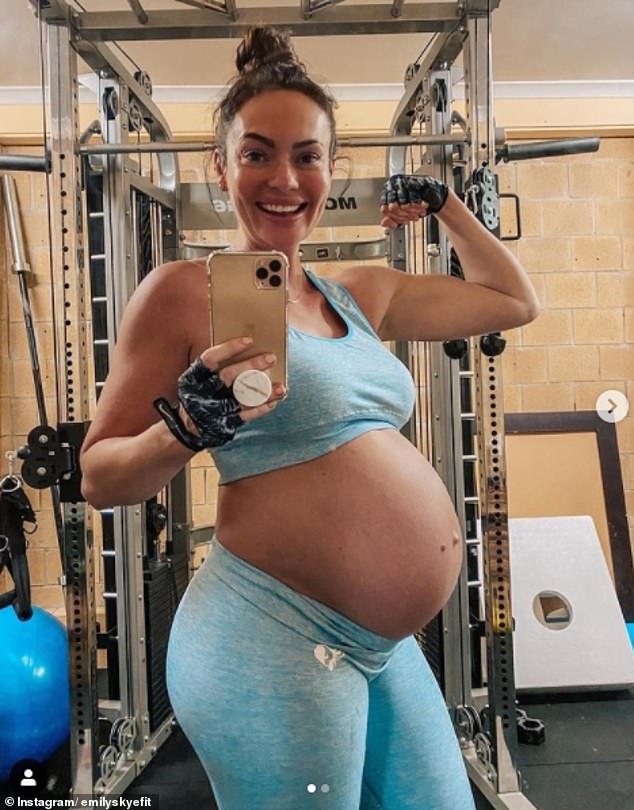 Emily said becoming a mother has given her more reason to love her body and she wants to be a good example for her children. Pictured: Emily, while pregnant with baby Izaac

In her heartfelt post, the fitness model revealed the negative comments have fueled a desire to pursue fitness goals on her own terms

‘I truly loved my body throughout my pregnancies, right after giving birth and I love it just as it is right now and will continue to love it for the rest of my life. I have even more reason to since becoming a mother and I want to be a good example for them’

Emily went on to admit the comments on social media have been known to impact her mood, adding that she wants to achieve her fitness goals on her own terms.

She penned: ‘⁣⁣⁣⁣⁣⁣⁣⁣⁣⁣⁣It doesn’t matter what others think and say but it still does affect a lot of us and nasty comments like the above do upset me initially but then I take deep breaths and let it go.

‘I know these people are being far from constructive and their only goal is to hurt me. I always try to turn a negative into positive though and I’m using them as motivation.

‘So thank you nasty people, instead of bringing me down you’ve only made me stronger, more determined and more resilient.’

‘I WILL be fit and strong again because I want to and I’m doing it for myself on my OWN terms. I’m feeling better, stronger and fitter every single day,’ she wrote. 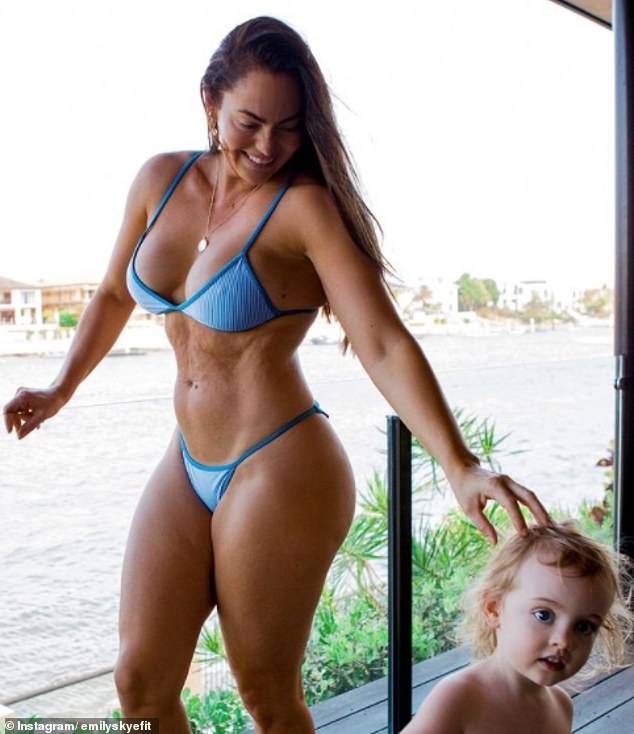 Emily admitted the negative comments upset her initially, but she always tries to turn a negative into a positive. Pictured: Emily and daughter Mia

* She is mostly using her home gym in the garage to reduce her ab separation.

* Pilates bridging and light core exercises are helping with the condition.

* On days she has time for a more intense workout Emily is doing kettlebell swings, lunges, squats and deltoid work to strengthen her back.

* The personal trainer has complained of a sore back from carrying around Izaac so she is trying to ease the pain by making her back stronger.

* Emily is engaging her pelvic floor muscles during every movement.

Emily’s post racked up over 5,000 comments, with many responses praising her for demonstrating strength.

One person wrote: ‘It blows my mind that people feel the need to say those kind of things. But like you’ve said before ‘hurt people, hurt people’.

‘Happy people don’t try to hurt people. You are beautiful and strong and I love watching your fit journey and your motherhood journey. Thanks for always keeping it real’

Another penned: ‘I don’t get these comments! A mother is literally the strongest person ever. Growing another human inside you, birthing it and being able to feed it too.

‘That’s no small feat and everyone should have respect for a mum’s body and celebrate it for what it’s done! Health is so much more important than being skinny anyway,’

A third added: ‘Seriously what is wrong with some people of this world! For every one of those vile comments there will be 1,000 people saying bravo @emilyskyefit. As a fit mum whose body has completely changed through kids I have nothing but respect darling’