Five-bedroom mansion next to Joe Biden’s home in Delaware hits the market for $2.4M


If you ever wanted to be neighbors with the president of the United States, here’s your chance.

A five-bedroom, five and a half bathroom mansion next to Joe Biden‘s custom three-bedroom, four-and-a-half bathroom in Wilmington, Delaware home has hit the market for $2.39 million.

The 8,700-square-foot home includes a two-story façade with nine six-panel windows with green shutters and a hipped roof, according to the New York Post. Two wings extend forward from the main house, almost like the White House does.

The house was built by Joe Morra, one of Delaware’s premier builders, who designed it as his dream home in 1998, according to its Realtor.com listing. 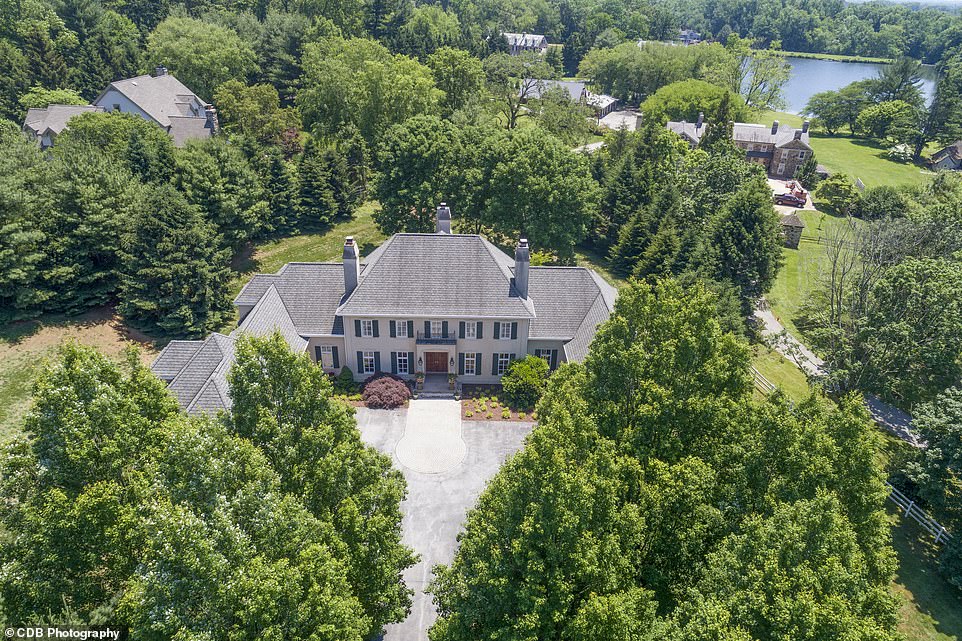 An 8,700-square-foot mansion on nearly two acres of Wilmington, Delaware is on sale for $2.4 million 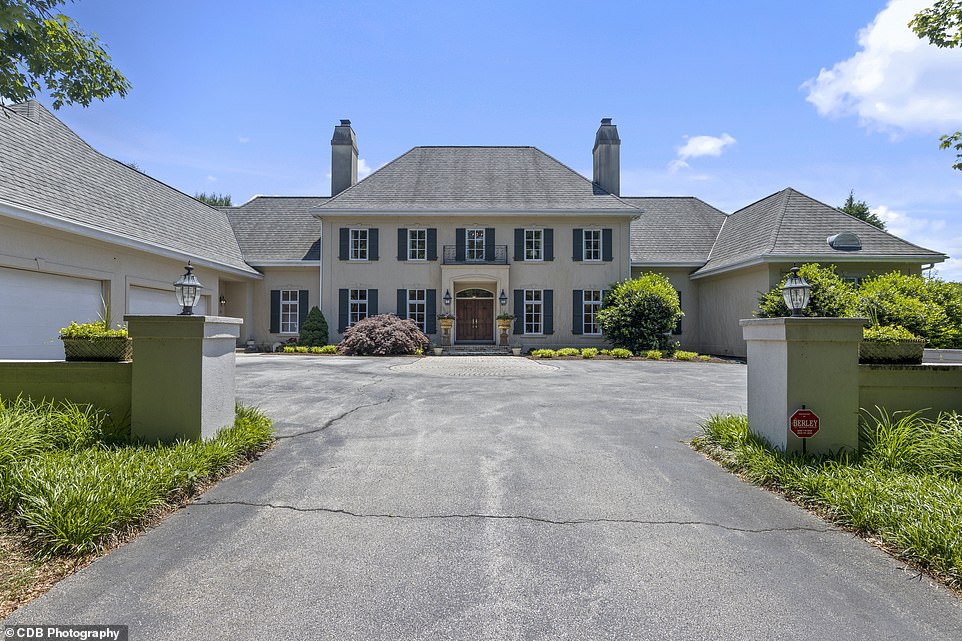 The exterior of the home features a motor court, nine paneled windows and two wings that protrude from the center of the home, almost like the White House does 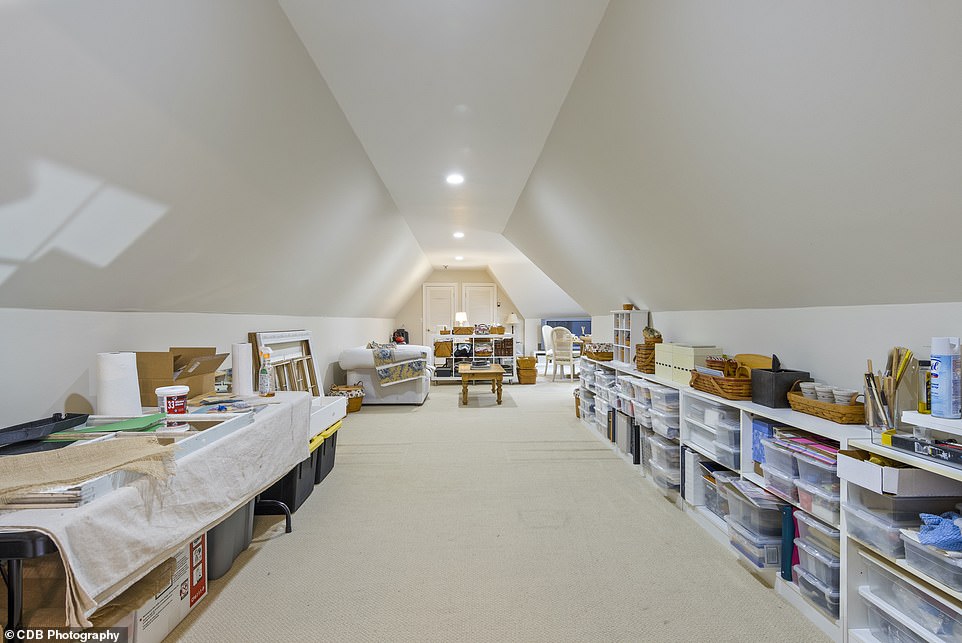 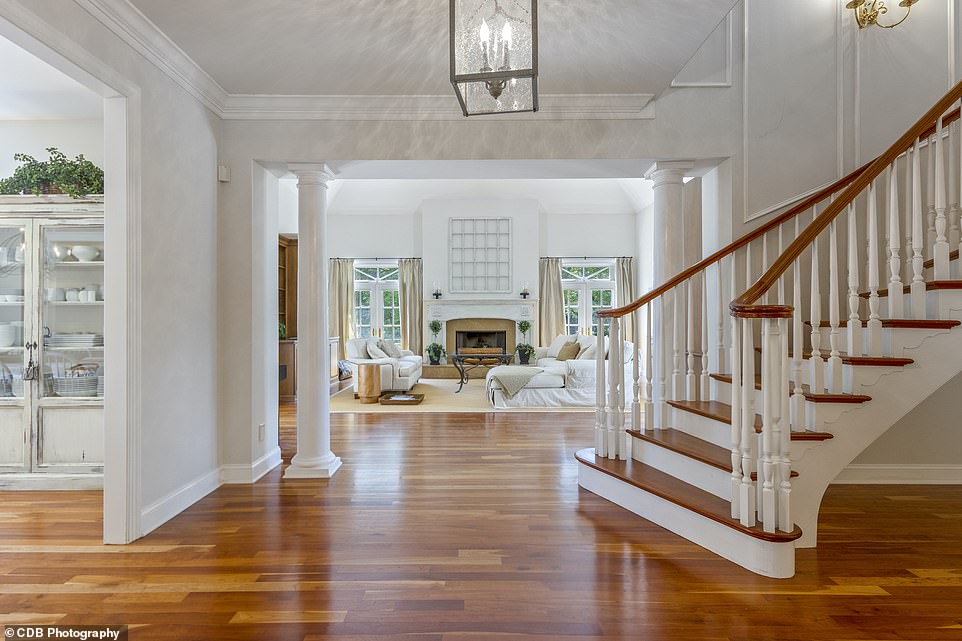 A large winding staircase connects the first floor to the second floor, providing the home with an elegant look 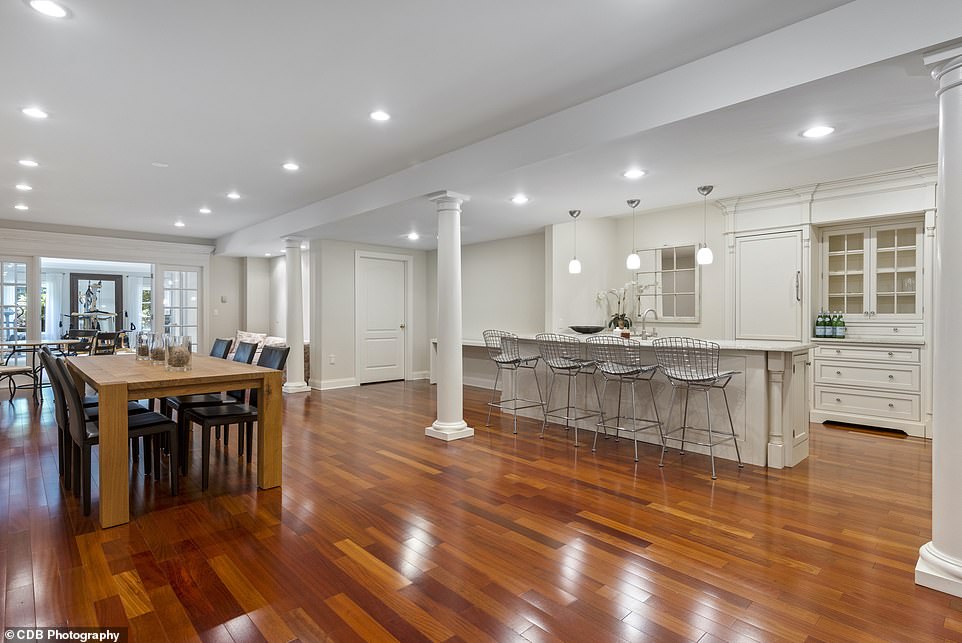 There is also a designated homework nook, a bar and seating area outside of the kitchen

It features an open floor plan that allows for an abundance of natural light, and five bedrooms, each of which have their own attached bathrooms.

‘It is an unusual style for the area, which is usually in Colonial style,’ Michael Kelczewski, of Brandywine Fine Properties Sotheby’s International told the Post of the Greenville neighborhood.

The area is one of the most expensive in the state, local real estate agent Stephen Mottola of Long and Foster Real Estate, told the Wall Street Journal in 2020, and is known as ‘chateau country,’ due to its large Colonial estates, many of which were built by the wealthy du Pont family. 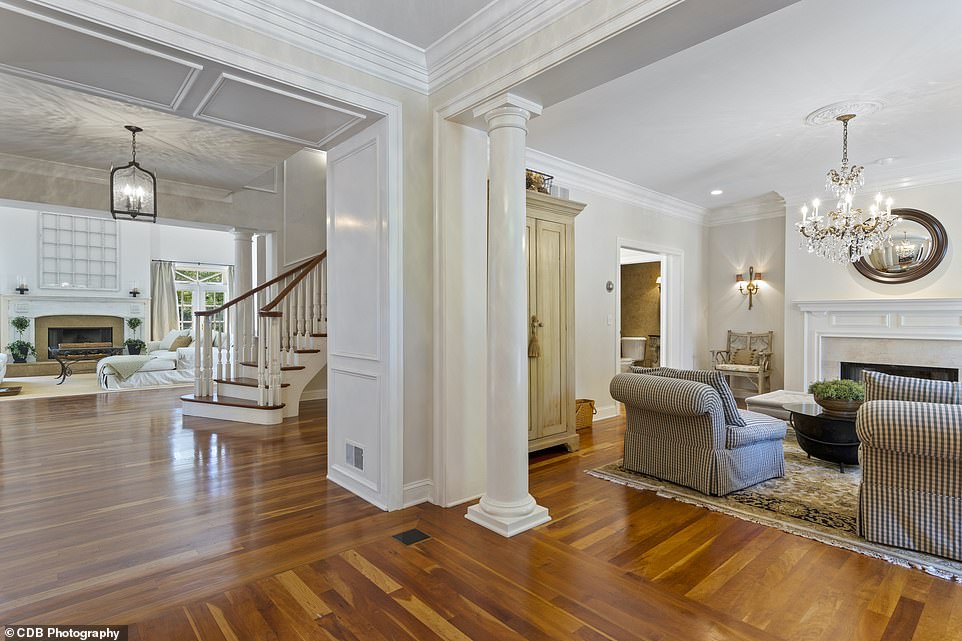 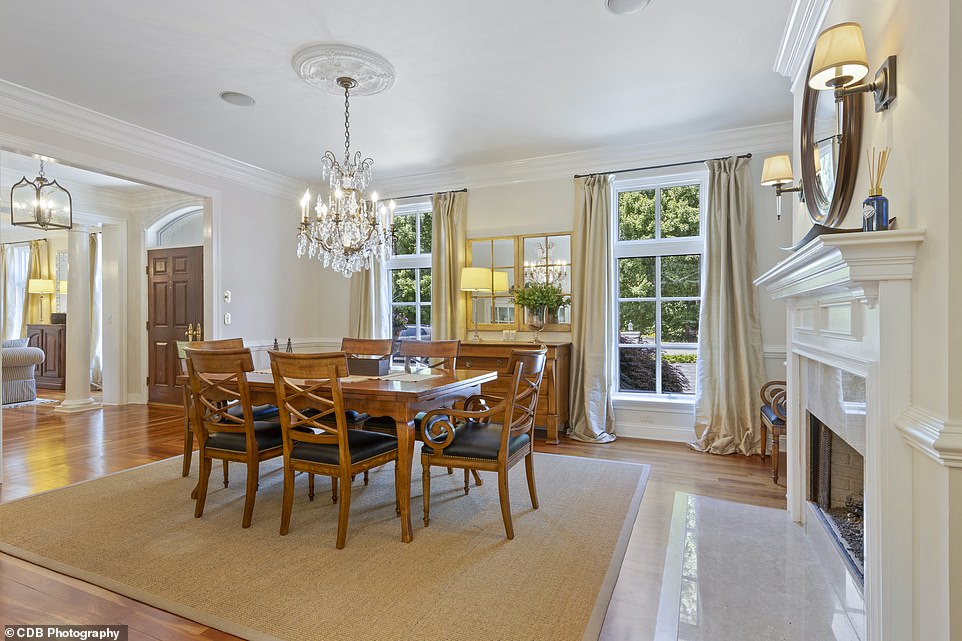 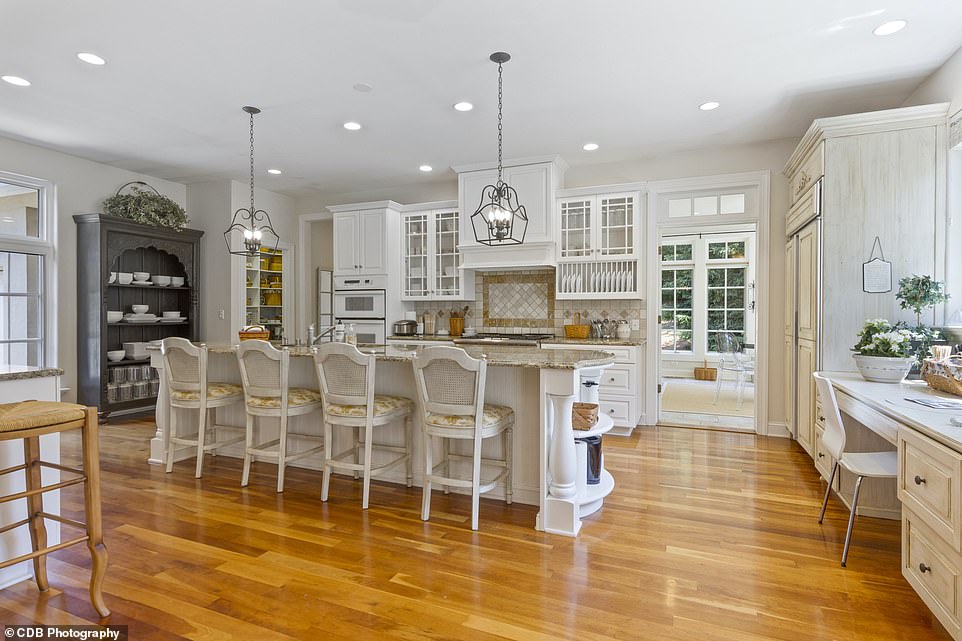 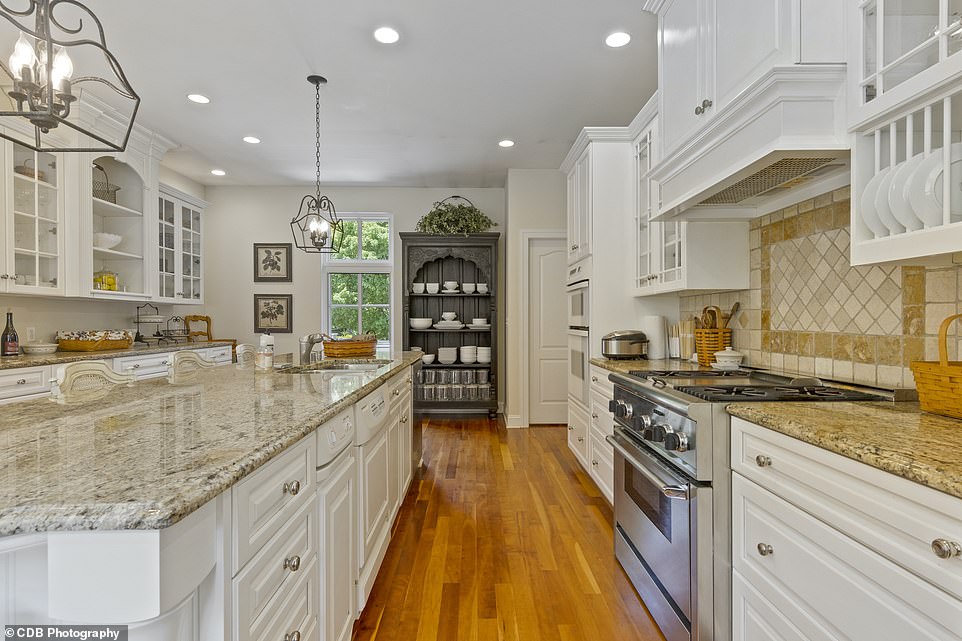 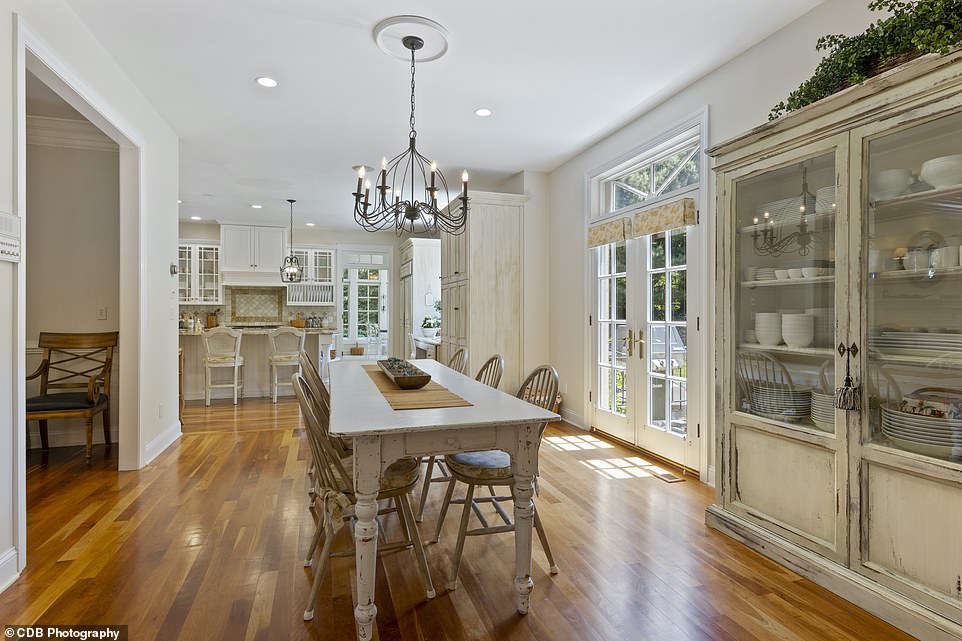 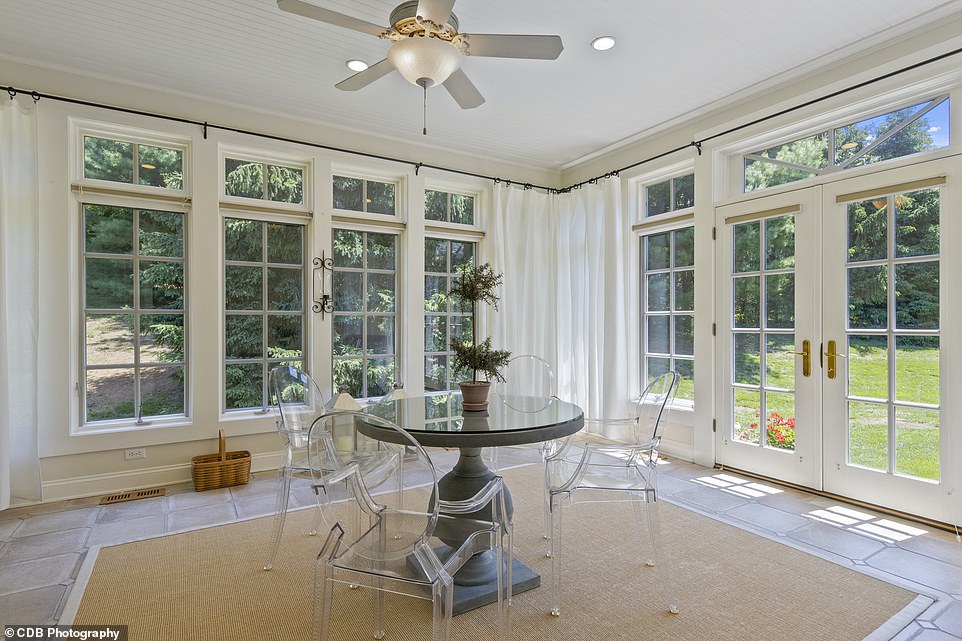 The expansive house for sale in the area includes a motor court and a covered entryway with wood doors, which open into a massive foyer with Brazilian hardwood finishes, tray ceilings, cathedral ceilings and wainscoting.

Past that is a grand room with French doors, tray ceilings and a third fireplace with a floor to ceiling mantel installation.

The first-floor also includes a French country-inspired kitchen with a designated breakfast room, a homework nook and a bar with seating.

The kitchen is finished with ivory cabinets, marble countertops and a tile backsplash.

A sun room branches off from the kitchen, with French doors leading out to a patio for entertaining guests on the nearly 2-acre lot. 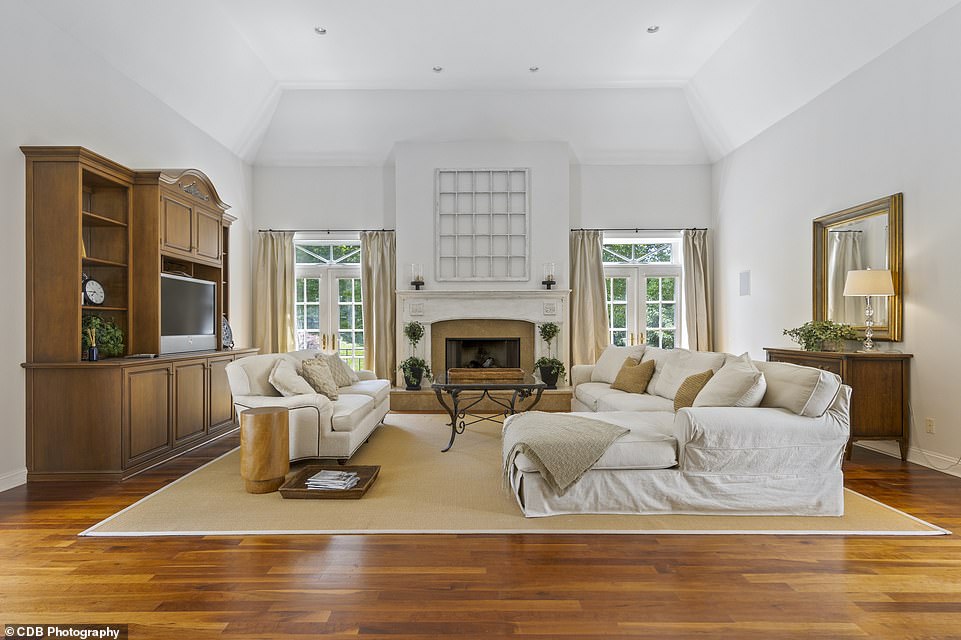 The grand room is a cozy place to relax on the couch or near the fireplace. It includes French doors that open to the yard 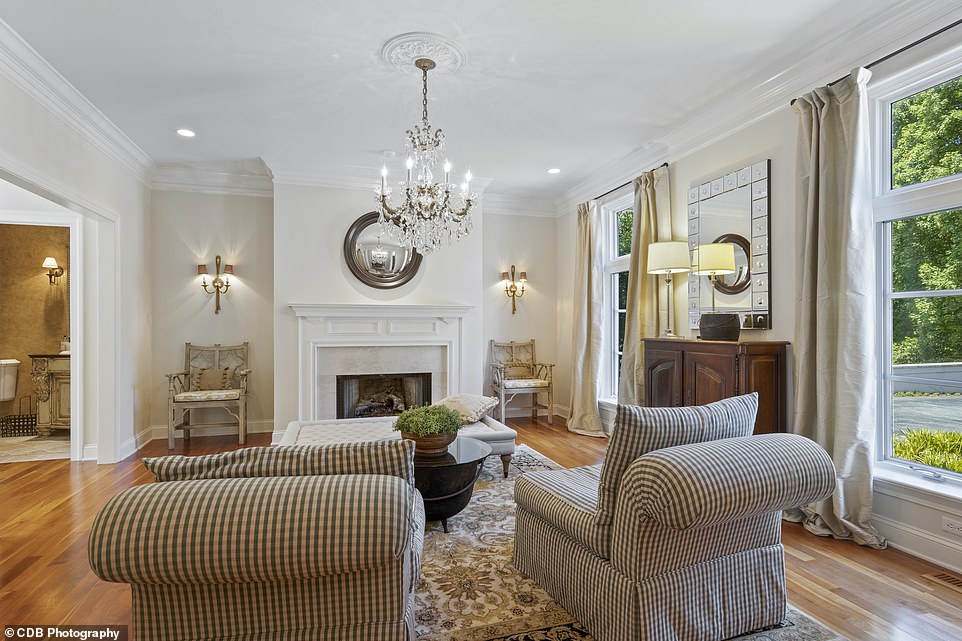 TThere is another fireplace in the liivng room, which includes another chandelier and plenty of light 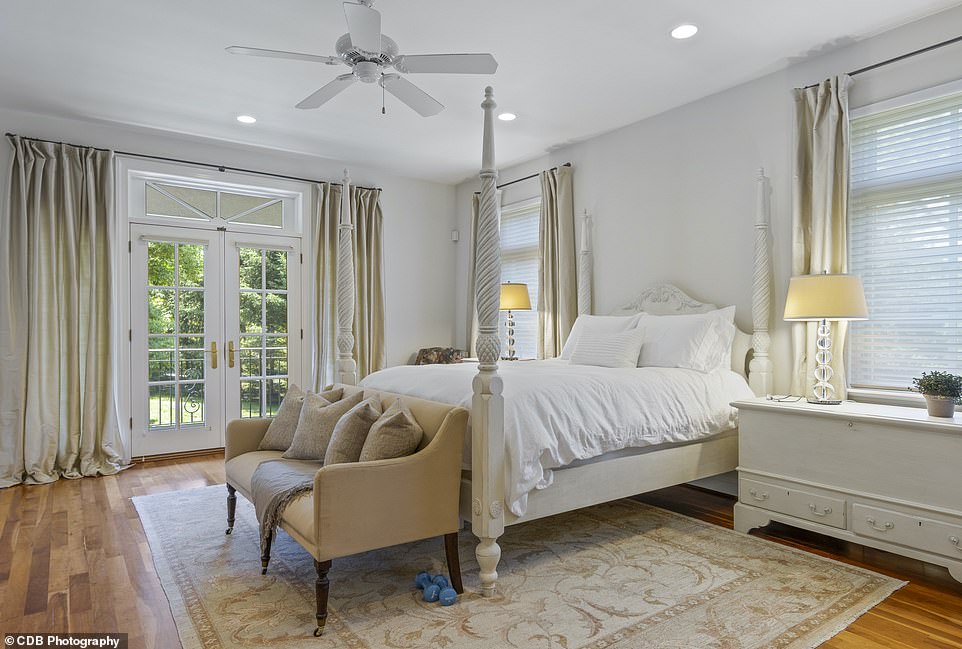 There are a total of five bedrooms in the house, including two master bedrooms. The first floor primary bedroom is pictured 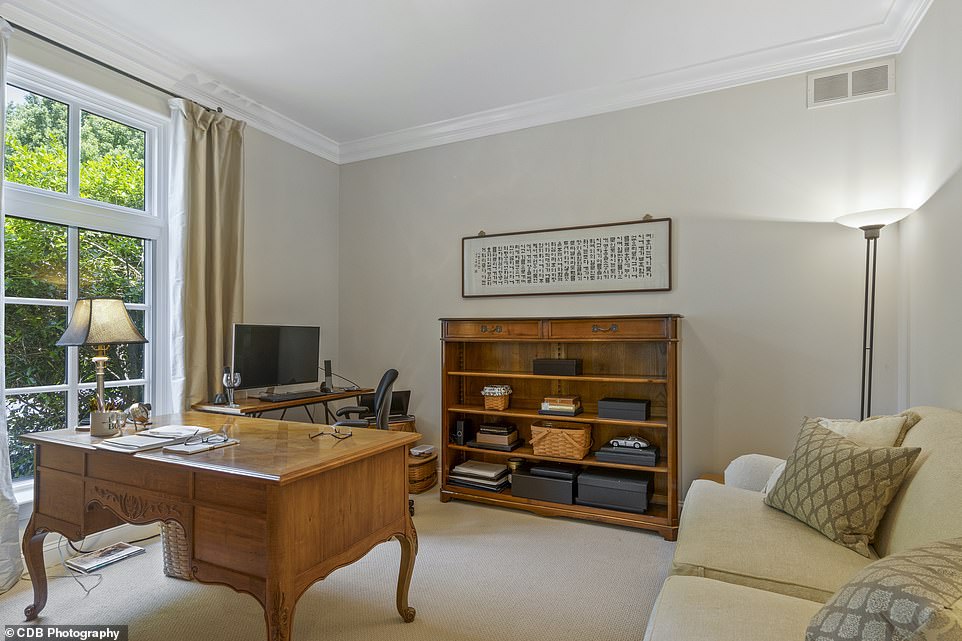 The first-floor bedroom has its own designated office space, which can fit its own couch and desk 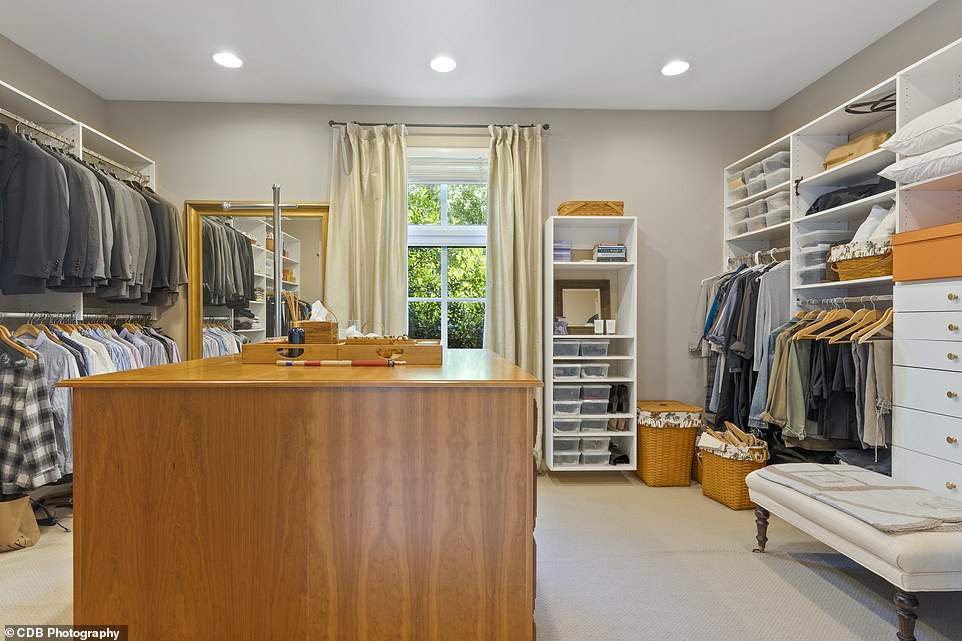 And the bedroom has a large walk-in closet, which can fit hundreds of shirts and other supplies 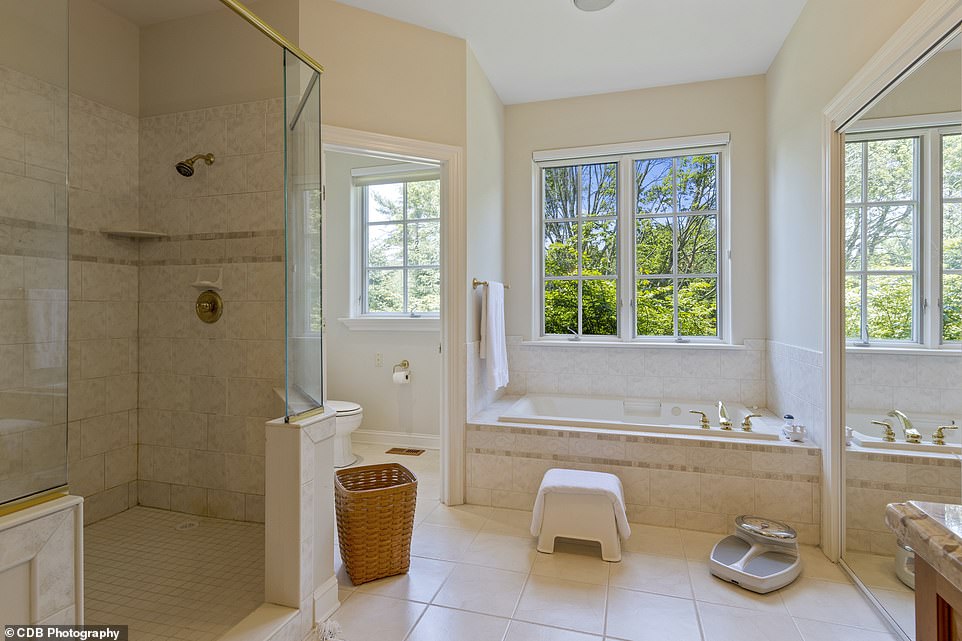 The home also has two primary bedroom suites, one on the first floor and another on the second, where there are also three other bedroom suites and a playroom or workspace.

The lower level of the home is on a slope allowing natural light to shine through the basement, which includes a home theater, a home gym and another wet bar.

In 1998, President Joe Biden purchased the neighboring Wilmington lot, which overlooks a man-made lake for $350,000, but it is now estimated to be worth at least $2 million, according to the Journal. 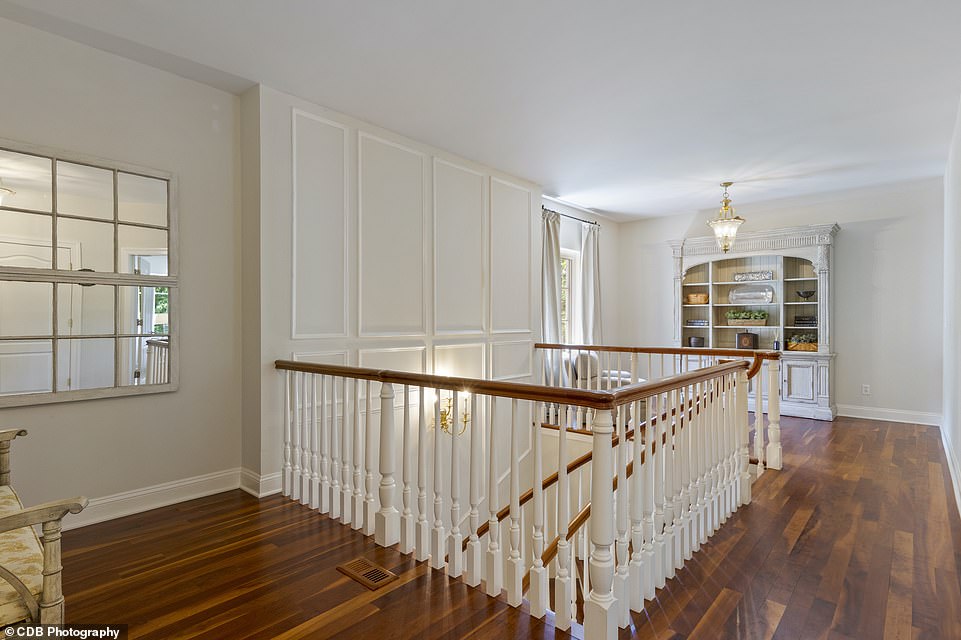 There is ample storage space on the second floor near the grand staircase, with a seat near a window for people to enjoy 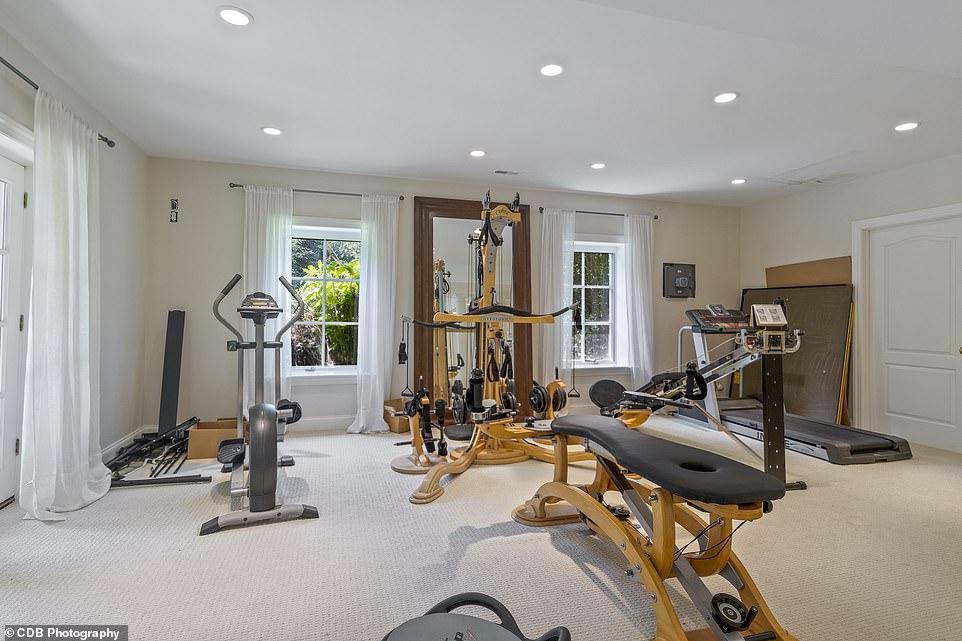 The basement features a home gym, and still manages to include sunlight as the lower level is on a slope 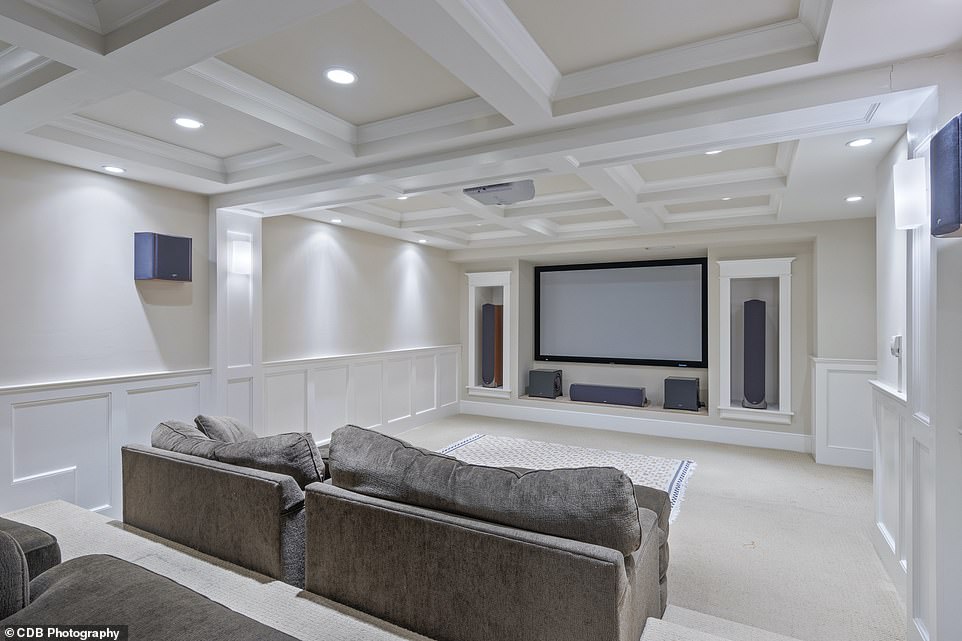 Guests can get comfortable in the basement, too, in the home theater, complete with comfortable couches, surround sound and a large screen to watch movies or television shows

But living near the president of the United States may pose some problems.

When the president is in town, security checkpoints prevent unauthorized guests from entering the immediate proximity of his home, and residents have said they have faced some disruptions over the past few years.

‘I’ve spoken to neighbors, and the only issue with that is there are occasionally unannounced transits, where they shut down everything and you can’t leave the property,’ Kelczewski told the Post, ‘so I can see that being somewhat of an encumbrance.

‘But I think [the proximity to President Biden] is a selling point,’ he added, noting that several New Yorkers and New Jerseyans have already requested tours of the home.

Hoda Kotb has reunited with her daughters Haley and Hope after returning home from Tokyo, and the family celebrated...

Man accused of assaulting baby to appear in court