Flood warnings have been issued across Britain today, with more downpours expected after a month’s worth of rain fell in less than 24 hours yesterday.

The Met Office has forecast outbreaks of rain to hit the South late this afternoon into this evening, with the Environment Agency issuing 39 flood alerts, where flooding is possible, in London and surrounding areas, Kent, parts of the Home Counties, the West Midlands and Wiltshire.

Yesterday saw areas like Hampshire and Buckinghamshire particularly affected by heavy rain, with the village of Otterbourne lashed with 2.6in (67mm) of rainfall from 11pm on Thursday to 5pm on Friday.

During the same time, areas like Dancers End, Drayton Parslow, Toddington had 2.5in (65mm), while southern Farnborough endured 57mm.

Temperatures are predicted to range from highs of 19C (66.2F) in London and Cardiff to 18C (64.4F) in Belfast and 17C (62.6F) in Edinburgh, with sporadic showers forecast for Scotland.

Further rain is predicted for the south of England, northern Scotland and Northern Ireland on Sunday, while the rest of the country will likely be dry with some bright or sunny spells.

Surrey Fire and Rescue Service on Friday alerted drivers to ‘lots of standing water’ on the roads, while the Driver and Vehicle Standards Agency (DVSA) has issued advice on driving safely through summer showers.

The DVSA’s tips include allowing at least double the usual separation distance between your vehicle and the one in front, keeping speed down and using dipped headlights so that other drivers can see you. 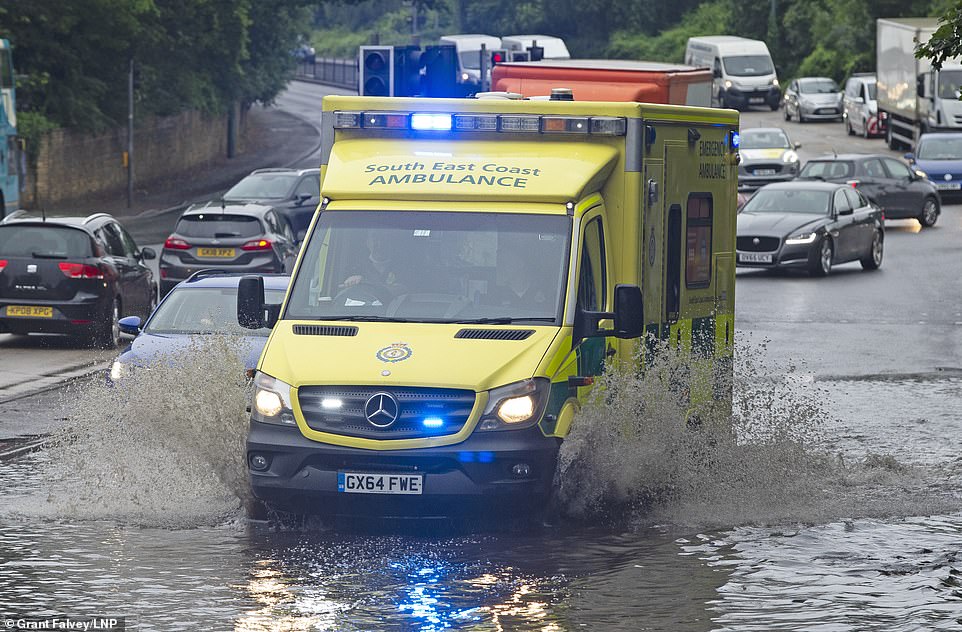 An ambulance on a 999 call battles through flood water on the A20 Aylesford near Maidstone in Kent, with more downpours expected today 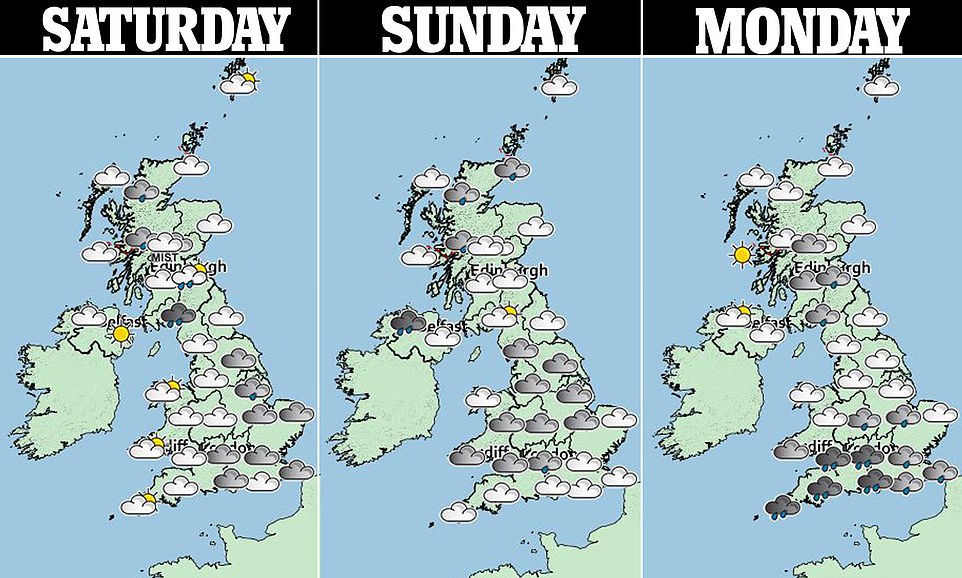 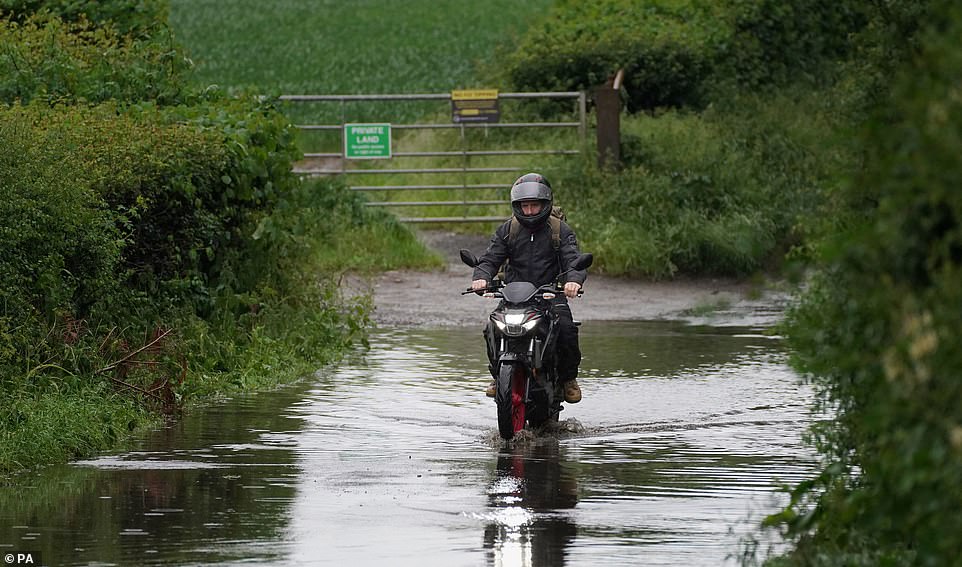 A motorcyclist contends with floodwater while going through Chesham, Buckinghamshire yesterday 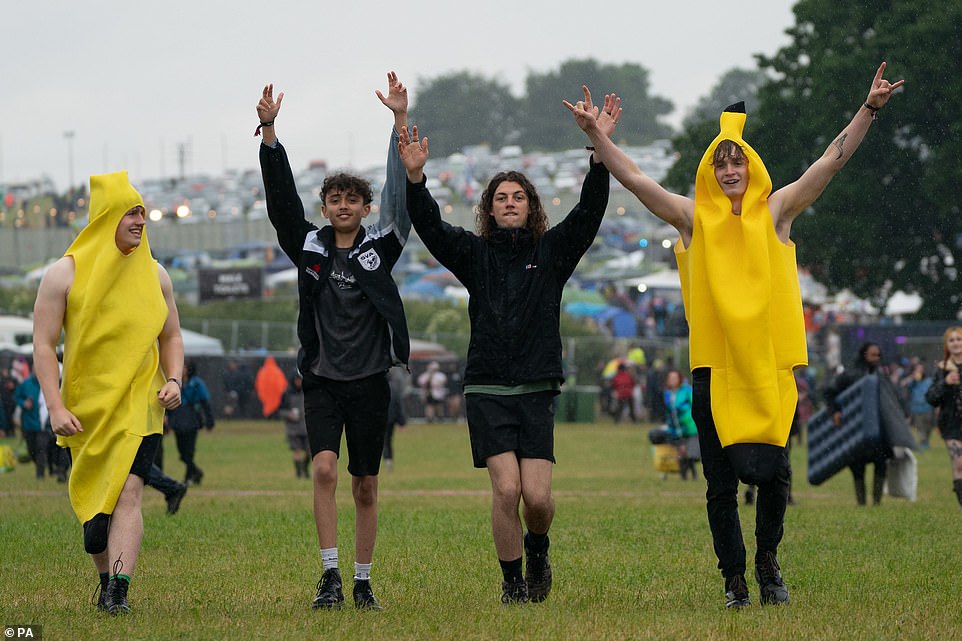 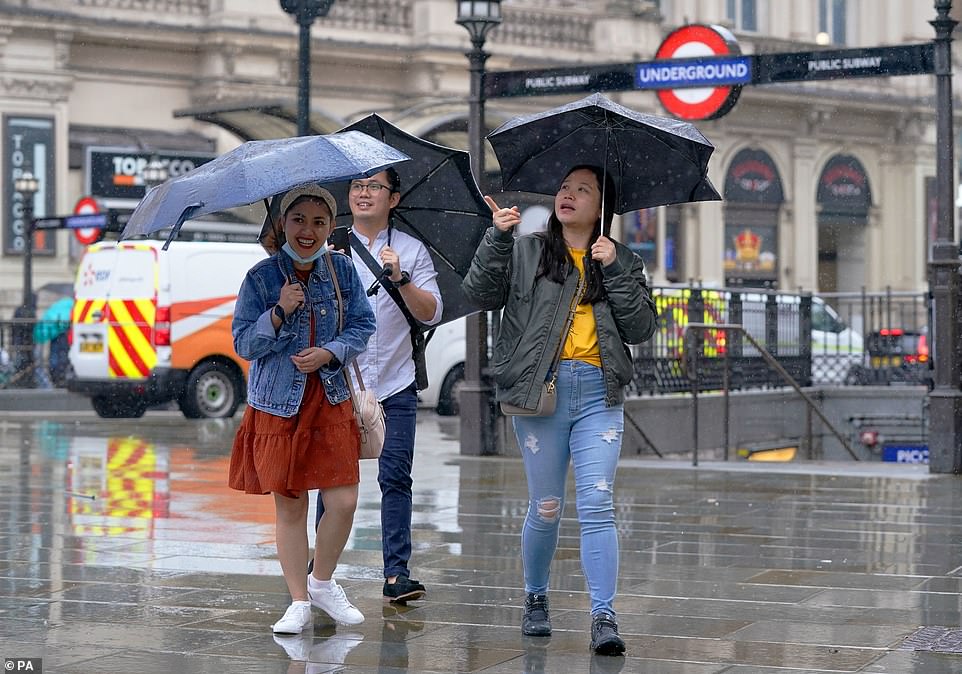 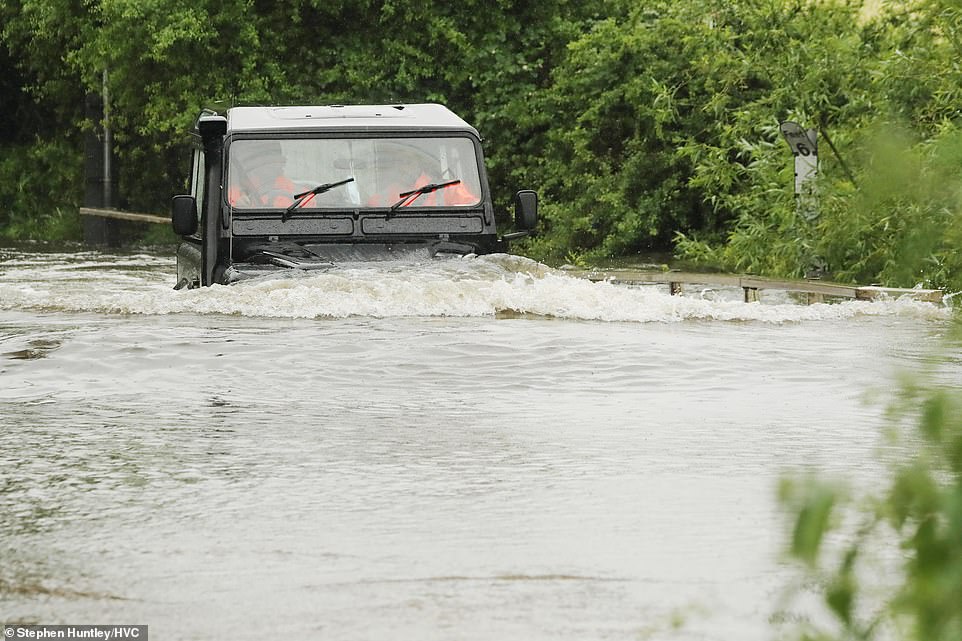 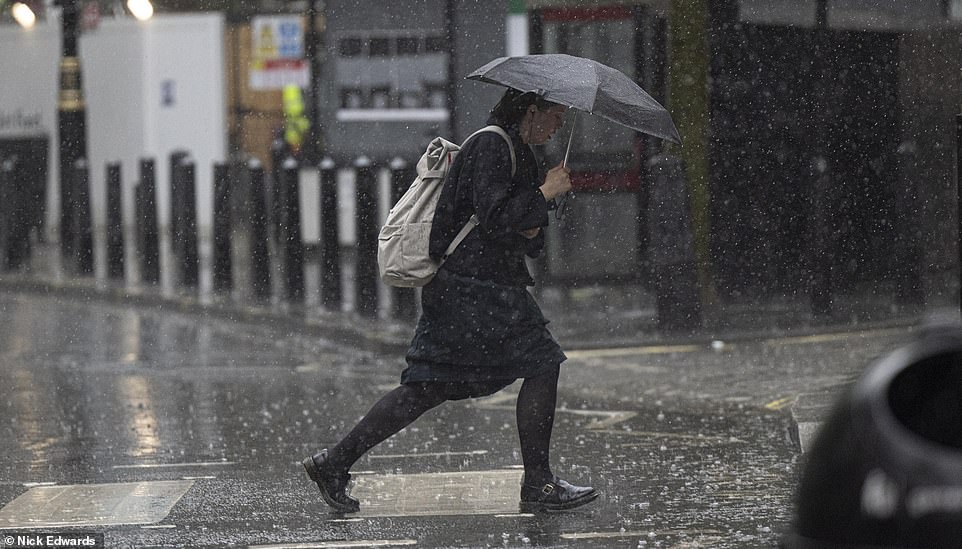 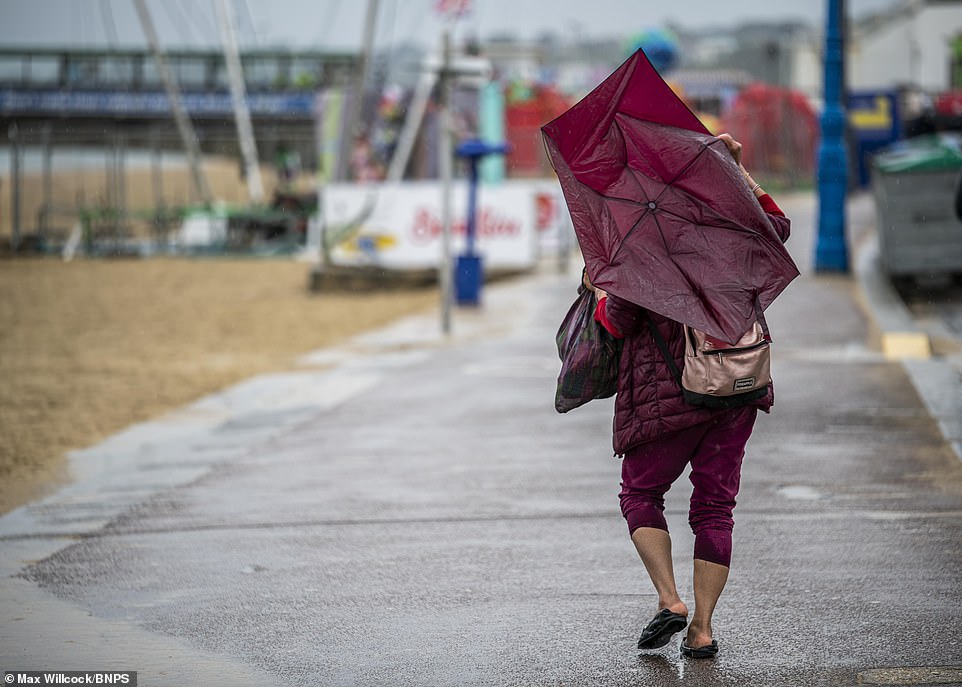 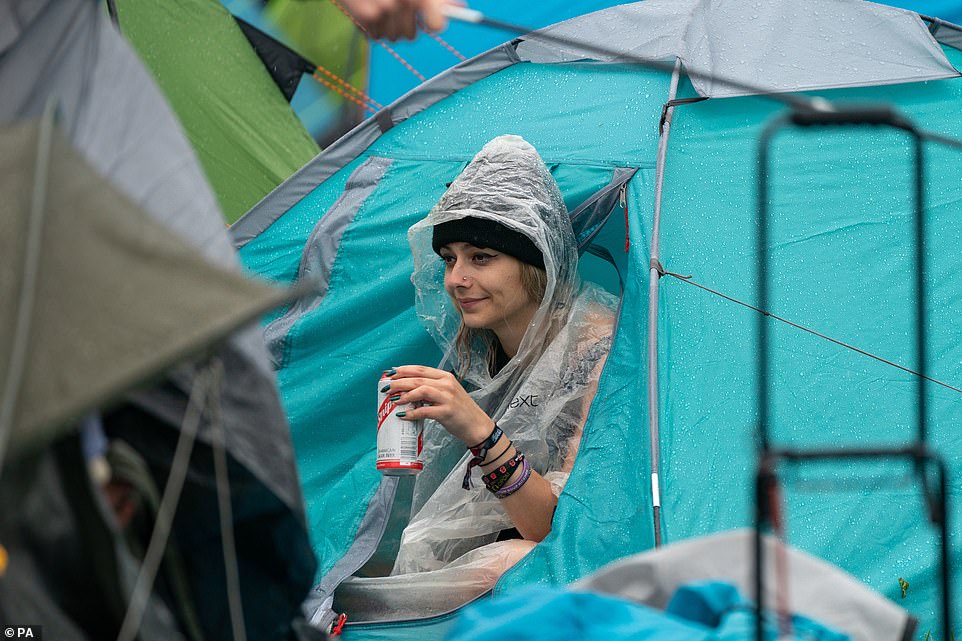 Have you taken any pictures of flooding in Britain today?

Please email them to: pictures@mailonline.co.uk

Torrential downpours yesterday flooded pub gardens and forced football fans to watch England and Scotland’s 0-0 draw at home at the start of what is expected to be a weekend washout.

Builders across the country were rejoicing in the morning as the heavens opened – but it was bad news for campers who had decided to book staycations for this weekend.

Britain’s heatwave is well and truly over as lightning and torrential rain struck throughout the country.

Rain began to fall on Wednesday, which fell short of becoming the hottest day of the year so far when a high of 29.2C (84.56F) was recorded at Heathrow, after the 29.7C (85.46F) peak felt in Teddington, Middlesex, on Monday.

The flooding caused the Blackwall Tunnel in Tower Hamlets, east London, to close briefly on Friday morning – leading to a backlog of traffic causing chaos on the roads.

Motorists also faced treacherous conditions on the A14 in Cambridge yesterday as much of the UK woke to heavy rain and flooding. Drivers struggled along flooded roads on their morning commute as central, eastern and southern England was hit by thunderstorms and rain in the wake of two weeks of hot weather.

Storms began to build across the English Channel on Wednesday afternoon and reached the southern coast of England at around 7pm.

A lightning strike hit Arlington Reservoir in Berwick, East Sussex, at 8pm on Wednesday – marking the first of a number of thunder storms expected over the next few days.