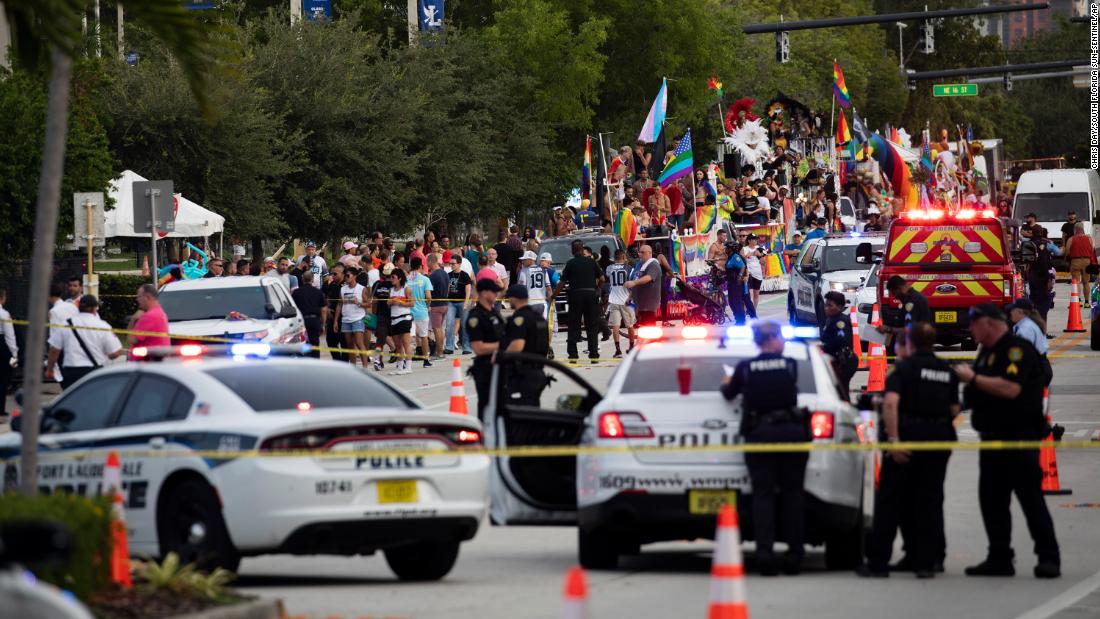 The driver was participating in the parade, but had ailments that prevented him from walking, the release said. He had been “selected to drive as the lead vehicle.”

Police said the man’s vehicle started to move forward, then accelerated, striking two people before driving through lanes of traffic and crashing into the fence of a business.

The pedestrians, both men, were taken to Broward Health Medical Center, where one of them died, police said Saturday night.

The driver remained on scene and cooperated with investigators. Police conducted a DUI investigation on the driver and found no signs of impairment, Fort Lauderdale Police said in their Sunday release.

The driver and the pedestrians are all members of the Fort Lauderdale Gay Men’s Chorus, the release said. No arrests have been made and police are not releasing the names of those involved as the investigation continues.

In a statement issued Sunday, Fort Lauderdale Mayor Dean Trantalis said the facts pointed to the incident being an accident rather than a planned attack on the community as he had initially believed.

“I was an eyewitness to the horrifying events. It terrorized me and all around me. I reported what I saw to law enforcement and had strong concerns about what transpired — concerns for the safety of my community. I feared it could be intentional based on what I saw from mere feet away,” the mayor said in a statement. “Law enforcement took what appeared obvious to me and others nearby and investigated further — as is their job.”

“As the facts continue to be pieced together, a picture is emerging of an accident in which a truck careened out of control. As a result, one man died, two others were injured and the lives of two members of Congress were at risk. My heart breaks for all impacted by this tragedy,” he added.

The pedestrians were hit near a vehicle in which US Rep. Debbie Wasserman Schultz was riding. She tweeted Saturday night, “I am deeply shaken and devastated that a life was lost.”

“The Fort Lauderdale Police Department and the Federal Bureau of Investigation collaborated in investigating this incident with a goal of understanding the totality of the circumstances, and to identify if this was an accident or an intentional act. Today we know yesterday’s incident was a tragic accident, and not a criminal act directed at anyone, or any group of individuals,” he said.

The president of the Fort Lauderdale Gay Men’s Chorus, Justin Knight, said in a statement that the group’s “thoughts and prayers are with those affected by the tragic accident that occurred when the Stonewall Pride Parade was just getting started.”

Knight said three people were taken to the hospital, including artistic director Gary Keating, who was treated and released. The remainder of the parade was canceled after the crash.

The chorus is made up of about 25 people and is the longest-established gay men’s chorus in the state of Florida. About half the members of the chorus were at the event Saturday, and they were planning to walk in the procession.

Prayers for all affected

Mayor Trantalis spoke about what flashed through his mind as he watched the events unfold around him at the beginning of Saturday’s parade.

“My visceral reaction was, ‘we’re being attacked,’ why not, why not feel that way?” Trantalis asked at the vigil.

“But that was my first reaction. I regret the fact that I said it was a terrorist attack, because we found out that it was not. But I don’t regret my feelings, I don’t regret that I felt terror,” Trantalis continued.

“All I could do is think about this all day long, the image will not leave me. So, here we are finding out that it was an elderly gentleman who lost control of the truck, and I guess we forgive him,” Trantalis said. “But I regret that his consequences resulted in the death of an individual who was innocent, and who was there to have a good time, like the rest of us.”

Wilton Manors Mayor Scott Newton also spoke at Sunday’s vigil, and he thanked the quick and decisive efforts of first responders and asked the audience to pray for all involved in Saturday’s incident.

“This was a pure accident, at first we didn’t know what it was, but I’m telling you right now, I talked to a gentleman that was there right before it happened, and he asked this gentleman, ‘please, can you move your truck up just a little bit?’ He goes, ‘sure,’ starts the truck up, goes, what I understand, I haven’t heard this from the police, but what I understand, is he had a problem with his leg and that’s why he didn’t walk in the parade,” Newton said.

“That’s a pure and simple accident. We’re not just praying to God for the one that’s in the hospital, we need to pray for the gentleman that, I don’t know if I could live if something like that would have happened to me, so please pray for all of them,” Newton added.

“The Fort Lauderdale Gay Men’s Chorus is deeply saddened by the tragic death and injuries that occurred as a result of the unfortunate accident at the Stonewall Pride Parade. The accident victims and the driver are all members of the Chorus, so it is very emotional for everyone,” Boo read from the statement.

“Although the Pride parade was canceled, the festival continued, and the celebration of peace, love and acceptance carried on. As our Chorus family mourns together, we thank the community for their love and understanding,” Boo said.

Wilton Manors is a Fort Lauderdale suburb that bills itself as having a “strong gay presence,” according to the city’s website, embracing its “reputation as a destination for the gay, lesbian, bisexual and transgender community.”