Florida‘s 2020 death toll is as many as 8,000 fatalities higher than a usual year’s, even beyond the deaths directly caused by COVID-19, according to an analysis of Centers for Disease Control and Prevention (CDC) data.

The sunshine state saw as many as 23,000 ‘excess deaths’ beyond the expected number between January 1 and October 3, according to the South Florida Sun-Sentinel.

But the CDC’s data suggests the deadly toll exacted on the state since the coronavirus pandemic arrived in the US may be much higher.

Many of these excess deaths are likely not directly due to COVID-19, but rather to the shockwaves of the pandemic, including delayed care for chronic conditions, overdoses and suicides.

But counting coronavirus cases and deaths has been a subject of ongoing controversy, particularly in Florida, where families have been denied requests to test deceased loved ones for COVID-19, crooked officials have hidden the severity of the outbreak from view and backlogs of autopsy reports have amassed as systems built to address urgent emergencies have been stretched with the pandemic.

As of Wednesday, the Florida Department of Health reports 16,571 COVID-19 deaths among residents, and 204 among non-residents.

According to the state’s dashboard, a total of 790,426 people have been infected in the state.

But he admits that they haven’t always been.

The Board of Medical Examiners was responsible for counting the state’s COVID-19 deaths from the time Governor Ron DeSantis declared a state of emergency for the pandemic, on March 9, until August 14.

Counting the dead during COVID-19 became the group’s responsibility as a result of a system put into place following a bizarre conspiracy theory that emerged in the early 1990s.

After Hurricane Andrew slammed into the state’s Southern tip, a small faction of Floridian’s became convinced that then-governor Lawton Chiles was having bodies of storm victims smuggled to a barge to be sunk in the Atlantic.

Chiles was under fire for his response to the hurricane because he waited five days to request FEMA assistance. Locals suspected he was trying to get rid of evidence of the real death toll in an effort to downplay the devastation caused by Andrew.

Florida’s Office of Medical Examiners was the charged with determining the death toll of any disaster after a governor declared state of emergency, in order to wrest some of the narrative control from the state’s leader.

But disasters declared state emergencies last a matter of days, or perhaps weeks.

The coronavirus pandemic has remained an emergency for Florida – and most of the US – for over seven months. 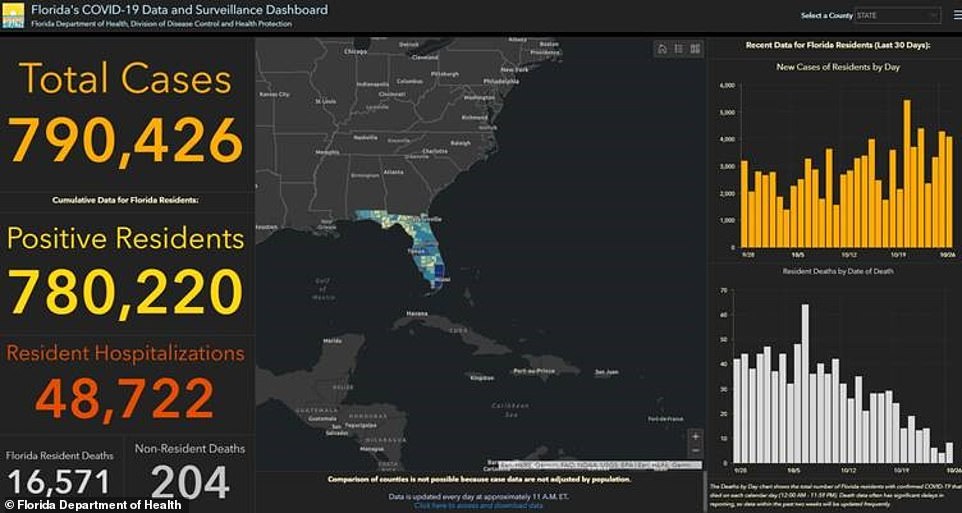 So far, nearly 17,000 people (including residents and non-residents) have died of coronavirus in Florida, according to the state’s health department, but its counts have been mired in controversy and political accusations that they are lower than  the pandemic’s real death toll

‘COVID really overwhelmed most of the medical examiners offices and they got very, very far behind trying to keep up with all the COVID-19 deaths,’ said Dr Nelson.

‘So, at one point, [Miami-]Dade County alone was 650 COVID cases behind…the systme was not designed for this.’

On August 14, the health department took over the counting. Dr Nelson says the backlog has long been cleared – but other problems have arisen.

The medical examiners ran behind, but they were thorough, and counted ‘snow birds’ – people who had fled other states to weather the winter and the lockdown in Florida – as deaths in the state.

The health department ascribed a location to a death based on the residential address of the deceased. So, by their estimation, if you had been living in Florida for two months, and you died of COVID-19 in Florida, but you got mail in New York, you would be counted a New York death – not Florida’s.

Yet, somehow, the health department was coming up with higher death numbers than were the medical examiners prior to the August 14 changeover. Dr Nelson still doesn’t know why. 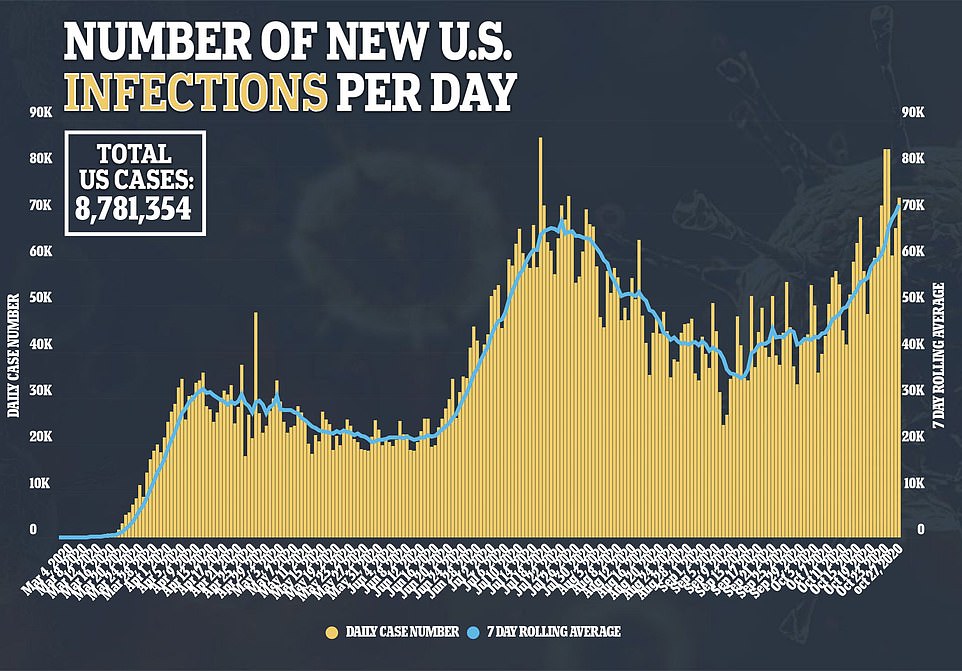 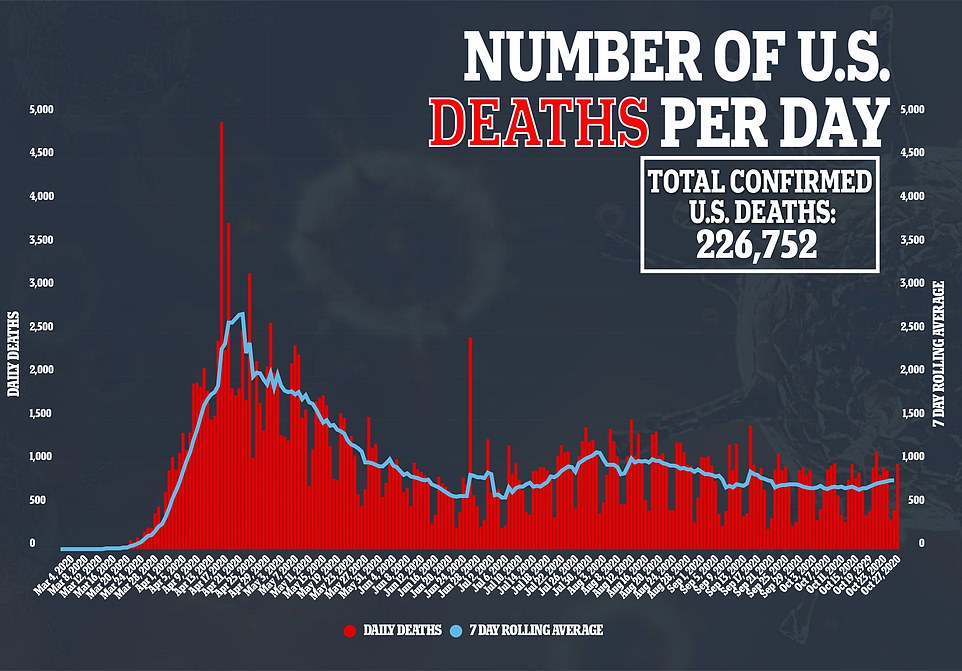 And then there were even more troubling issues. Back in March, before COVID-19 was declared a state emergency in Florida, Patrick Hidalgo died at age 41. His death certificate, signed by the Miami-Dade county medical examiner said heart disease killed the former Obama staffer.

His family begged for officials to test him for COVID-19 posthumously, but were denied, the Sun-Sentinel reported.

Months later, an autopsy performed at Columbia University in New York ruled that Hidalgo likely had COVID-19. His had not counted as a Florida coronavirus fatality.

Democratic state lawmakers have accused death reporting in the state of lacking rigor, blaming Republicans for downplaying the toll of the pandemic on Florida.

Dr Nelson insists that the reasons that deaths like Hidalgo’s went uncounted were unlikely politically motivated. 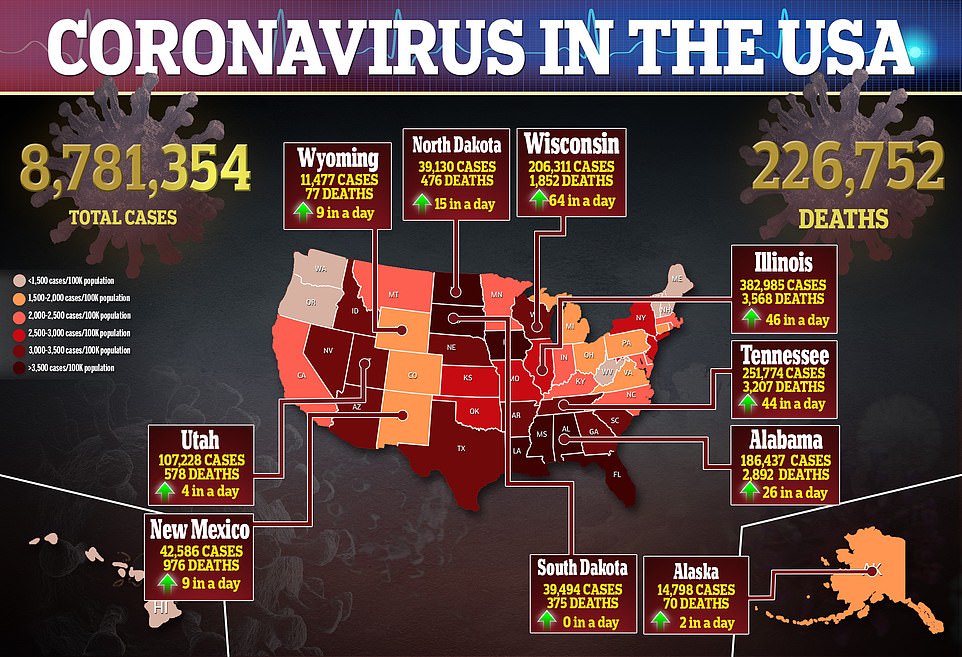 But that doesn’t mean that the count is accurate.

On the other hand, someone who had been generally healthy, but had both heart disease and COVID-19 – or even tell-tale signs of it a severe respiratory infection in the midst of a pandemic – might well be ruled a coronavirus death.

‘I’m not real confident that a lot of hospital physicians or community physicians know [to do that] – they don’t necessarily make that kind of connection,’ he said.

He acknowledges, too, that the number of COVID-19 deaths are likely undercounted.

‘Excess deaths that are respiratory-related – over time, we may see more pneumonias and things like that no than in years past, and this is why a lot of people don’t really rely on death certificates,’ Dr Nelson said.

‘So if you died of pneumonia, was it related to COVID? If a doctor is not attuned to that, it could go out as anything [on a death certificate], and that’s not really helpful.’

But when it comes to the CDC’s general count of excess deaths in Florida, he doubts that these are entirely COVID-19 deaths, although the toll has likely been driven up by the conditions of the pandemic.

‘Just to say that there’s excess deaths kind of bothers me because clearly we’ve seen an uptick in overdose deaths during the pandemic, and suicides, and those are fairly common types of attributes when things go badly,’ Dr Nelson said.

‘It could have been more’: Ronald Koeman curses Barcelona’s lack of ruthlessness against Juventus

'It could have been more': Ronald Koeman curses Barcelona's lack of ruthlessness against Juventus