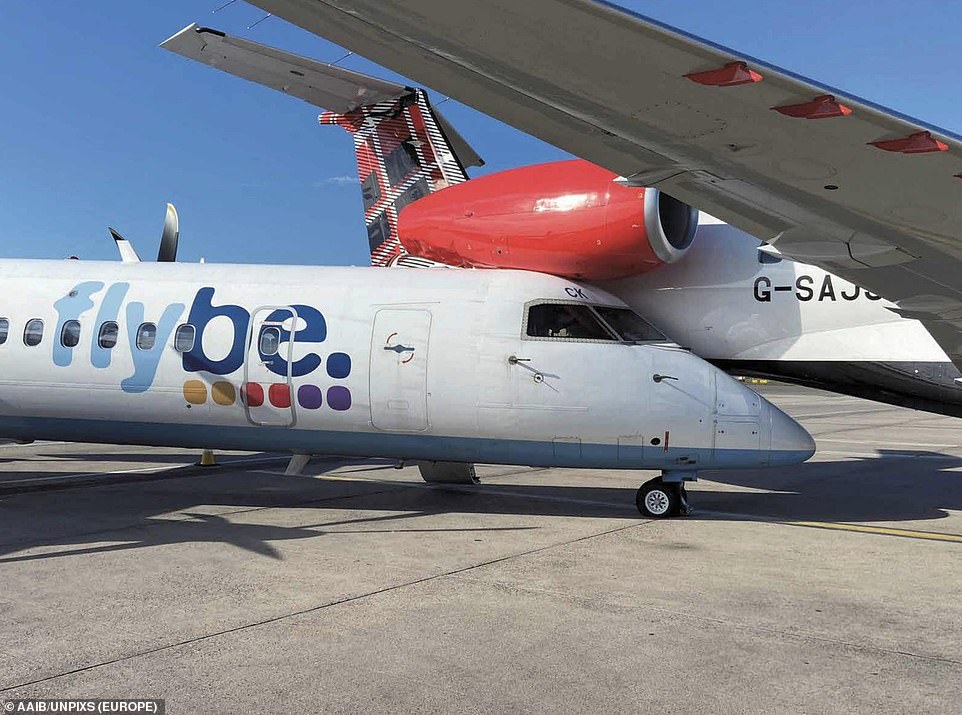 Ground crew at Aberdeen airport removed chocks from Flybe jet’s wheels allowing it to roll across the tarmac when its brakes failed and smash into Loganair plane, accident report reveals

A Flybe jet rolled across the tarmac and smashed into a grounded Loganair plane at a Scottish airport this summer after ground crew removed wheel supports without the pilots noticing.

The jet started to move across the taxiway at Aberdeen International Airport as the pilot and co-pilot attempted to slam on the brakes, an accident report has revealed.

But the brake system failed and the aircraft collided with a parked Loganair plane at a speed of 5.75 mph, weding nose under the engine of the other plane.

A report on the incident, which happened on June 16, has been published by the Air Accidents Investigation Branch (AAIB).

The Flybe plane had been grounded at Aberdeen since the budget airline’s collapse in March but it was due to be flown empty to an airport in Germany where it was to be placed back into storage.

Since the aircraft had not been flown in months, the two pilots had arranged to arrive at the airport earlier than normal to provide additional time to prepare for the flight and conduct inspections of the aircraft.

The aircraft was parked on a self-manoeuvring stand which had a 1° slope.

The Flybe jet is pictured as it rolled across Taxiway D, heading towards the parked and empty Loganair aircraft as pilots attempted to slam on the brakes 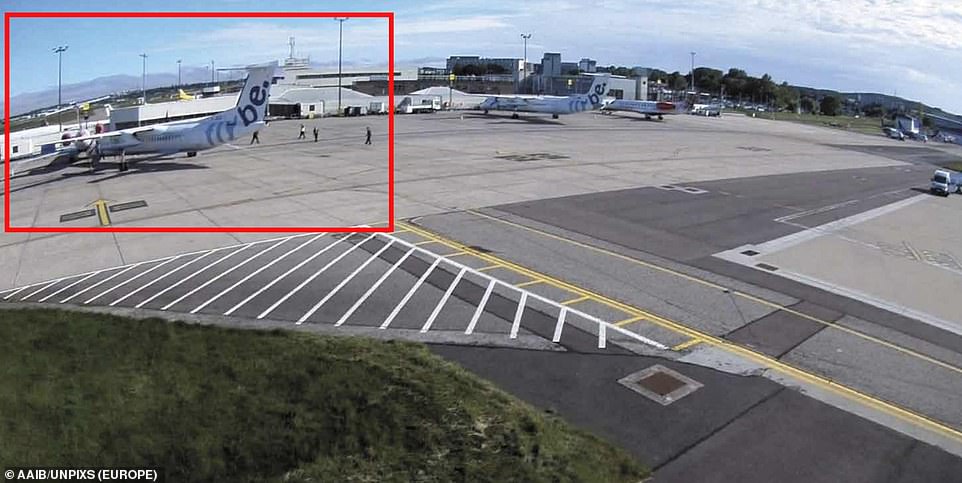 The jet eventually collided with the Loganair plane at a speed of 5.75 mph, ending its short journey with its nose wedged under the engine of the other plane

According to the AAIB report: ‘During the pre-departure checks, the chocks were removed from both the mainwheels and the nosewheels.

‘Neither pilot had authorised the removal of any wheel chocks, and neither noticed that all the wheel chocks had been removed.’

About 45 minutes after chocks were removed, the ground crew noticed the jet slowly starting to roll forward and alerted the pilots onboard.

Both pilots applied the toe brakes and the commander moved the park brake lever off and back to park twice, but the aircraft continued to roll forward. 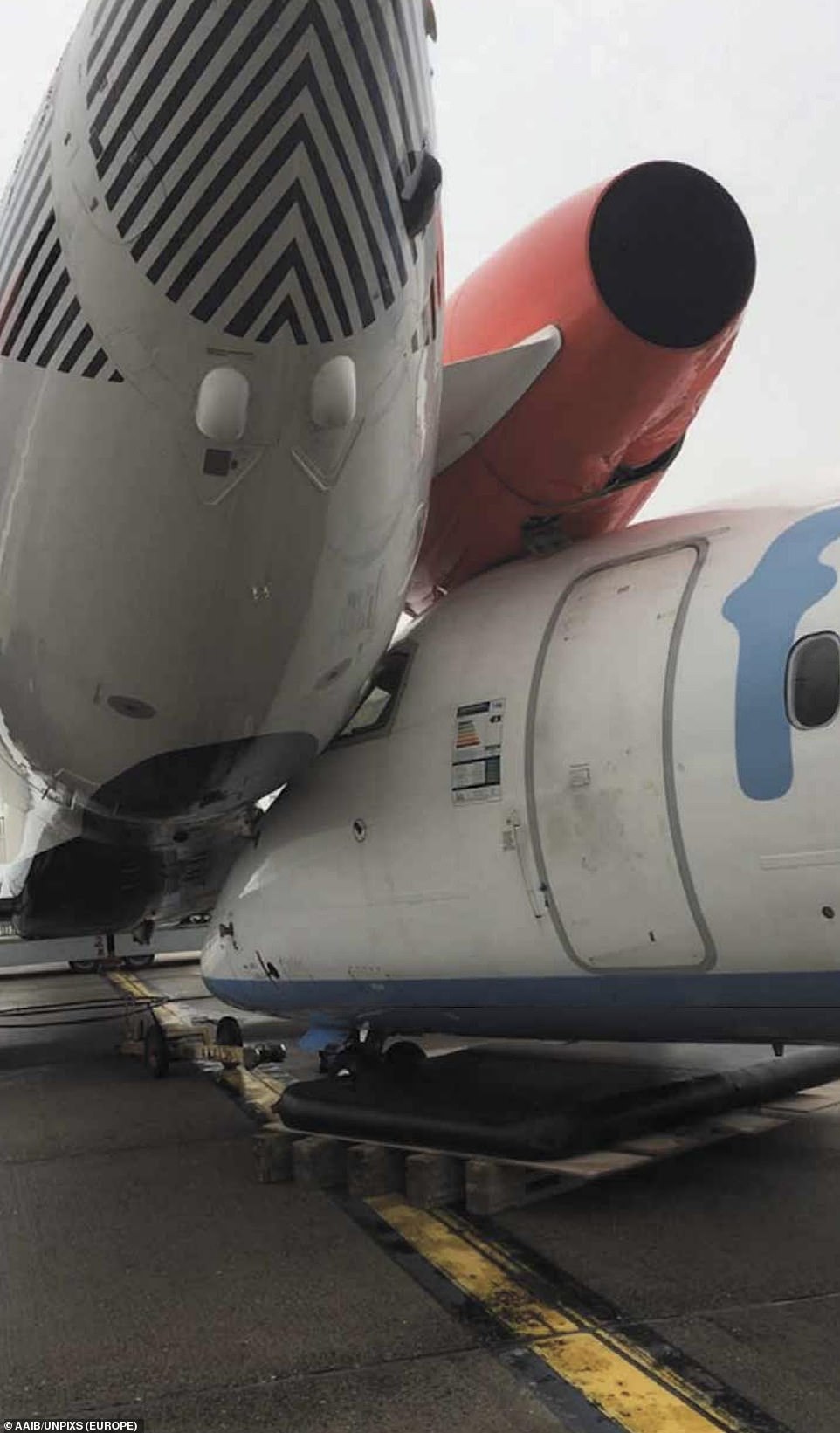 The Flybe plane struck the underside of Loganair plane’s second engine, ‘causing its right landing gear to be lifted clear of the ground’. The aircraft had been grounded since the budget airline’s collapse in March but was due to be flown to Germany to be put in storage

The commander recalled that, as the aircraft had started to move, he had noticed that the park brake hydraulic system pressure on the display was at zero.

Three engineers who saw the aircraft beginning to roll, ran to try to stop it from moving by pushing and pulling against its main strut.

One member of the ground crew ran to get some chocks and another jumped from the cabin door and moved to the left gear where he also pushed against its strut.

However, the aircraft continued to gather speed as it crossed Taxiway D whilst heading towards the parked and empty Loganair aircraft. 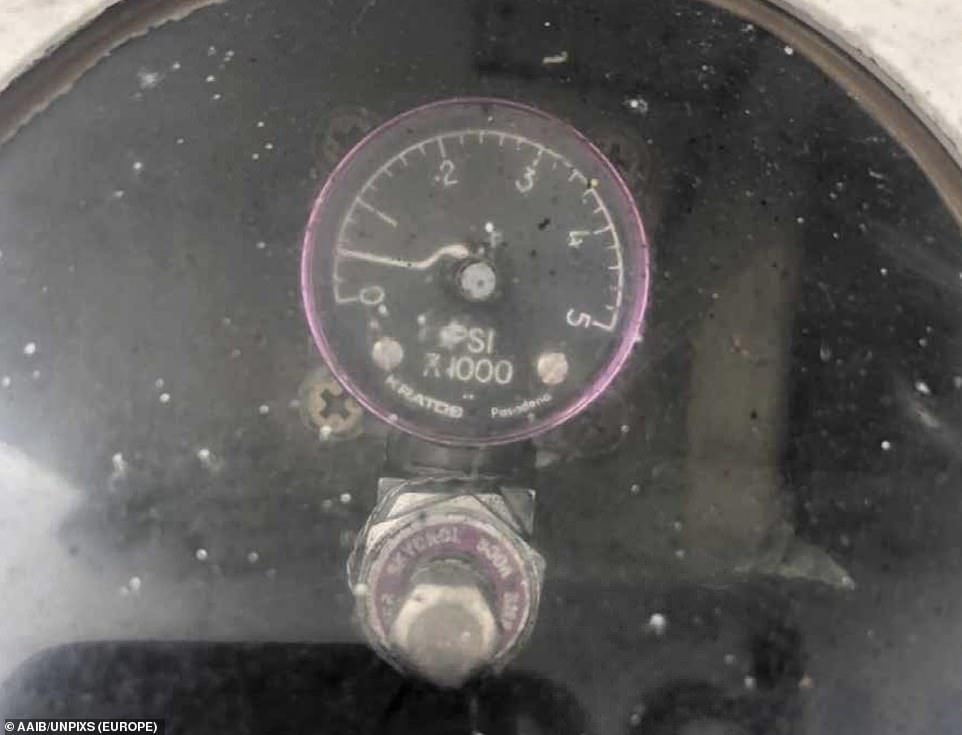 As the aircraft started to move, the commander noticed that the park brake hydraulic system pressure on the display was at zero. Pictured: Brake accumulator pressure after the accident

The engineers and one ground crew then attempted to slow the Flybe jet by pushing against the aircraft nose but eventually had to give up as it crashed into the Loganair jet at a speed of 5 knots (5.75 mph).

The Flybe plane struck the underside of Loganair plane’s second engine, ‘causing its right landing gear to be lifted clear of the ground’.

The jet came to a complete stop with its nose wedged under the engine of the Loganair plane and there were no injuries.

The full damage caused by the collision included damage to forward fuselage section and windscreen and the right engine nacelle was dented.

The AAIB report states: ‘Safety action has been taken by the CAA, operator of the aircraft, maintenance organisation, ground handling company and airport operator regarding the removal of wheel chocks during pre-flight preparation.’

50 great gifts under $25 people will actually use

Fray Bentos brings out new recipes – thanks to a MasterChef