After 266 long days, the return of fans to English league football is finally here.

But as clubs in certain areas of England prepare to open their turnstiles for the first time in almost nine months, a BBC Sport poll suggests fans are divided over whether they should be allowed to return before a Covid-19 vaccine is rolled out.

When can fans come back?

Clubs in certain areas of England can now allow a limited number of supporters into their stadiums following a relaxation of coronavirus restrictions.

The nationwide lockdown in England ended at midnight, meaning clubs in tiers one and two of the new restrictions can have up to 4,000 fans attend matches.

The first match with supporters present will be the League Two match between Carlisle and Salford City, which kicks off at 19:00 GMT on Wednesday.

There has been a growing clamour for fans to be allowed back into stadiums, with supporters missing the buzz of seeing their team in the flesh. And no amount of piped-in crowd noises can replace the authentic atmosphere when following games on TV or radio.

A petition calling on the government to allow fans back gained more than 200,000 signatures, and Prime Minister Boris Johnson reportedly privately indicated to MPs last month that reopening turnstiles as soon as possible was “a personal priority”.

However, the poll suggested a significant number of fans have reservations about heading straight back into stadiums.

Among fans who are not regular match-goers, more than two in five (43%) said they would never watch football matches in person before a vaccine, compared with 13% who would go frequently.

There were differences between supporters of clubs in different divisions, both regular and non-regular match-goers, with about a quarter (26%) of Premier League fans willing to return regularly to the stadium before a Covid-19 vaccine, compared with more than a third (36%) of EFL fans, and two in five of Women’s Super League fans (40%). 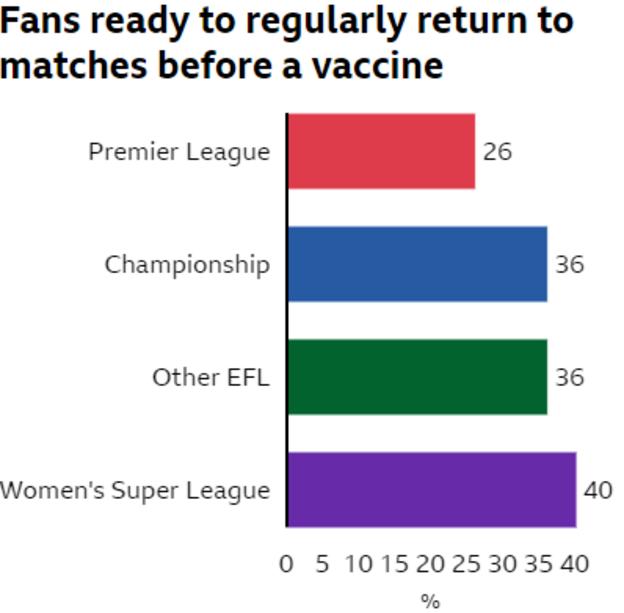 Age also seems to be a significant factor in fans’ willingness to return to stadiums before a vaccine – among both regular and non-regular match-goers – with younger supporters much more likely to say they would be ready to head back to stadiums than their older counterparts.

Older people are generally more at risk of becoming seriously ill with coronavirus than younger people, which may explain the differing views across age groups.

The poll shows that more than half of fans aged 55 and over (52%) said they would never return to matches in person before a vaccine is available, compared with 29% of fans aged 35-54 and 14% of supporters aged 18-34.

Have fans fallen out of love with their club?

The absence of live football has had an impact on how some supporters feel about their club, with 28% of fans polled saying they cared more about their team than before the pandemic, while 10% of fans said they cared less.

When broken down by age, it appears younger supporters have grown closer to their team than older fans over the past nine months – with 36% of 18-34 year olds saying they now care more about their club, compared with 19% of those aged 55 and over.

Fewer fans of Premier League clubs said they now cared more about the game than did fans of clubs in other divisions.

More fans of Championship clubs (34%), other English Football League clubs (35%) and Women’s Super League clubs (40%), told the poll they cared more about football in general than before the pandemic, than did Premier League fans (27%). 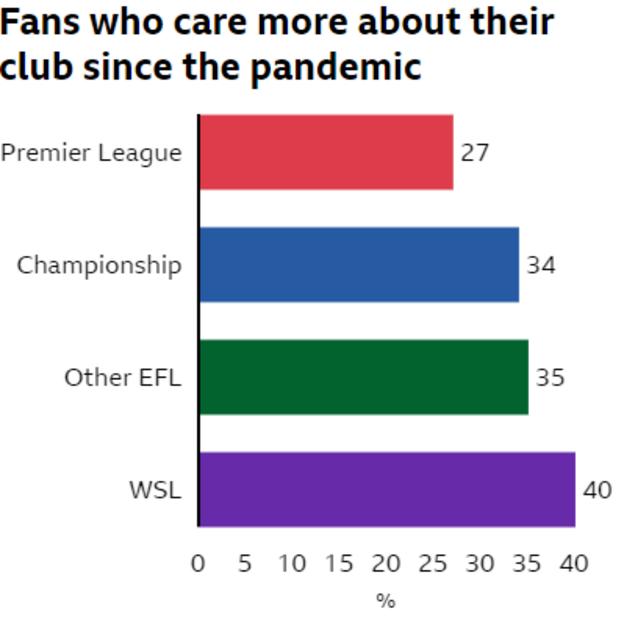 Fans divided on who should provide financial support

The absence of fans has had a damaging effect on the finances of clubs across the country.

The Premier League is believed to be close to agreeing a bailout deal with English Football League clubs, while a £50m rescue package for clubs in League One and Two has been “agreed in principle”.

Slightly fewer (24%) said the Football Association should bear the most financial responsibility, 22% said the government and 19% said the clubs themselves. 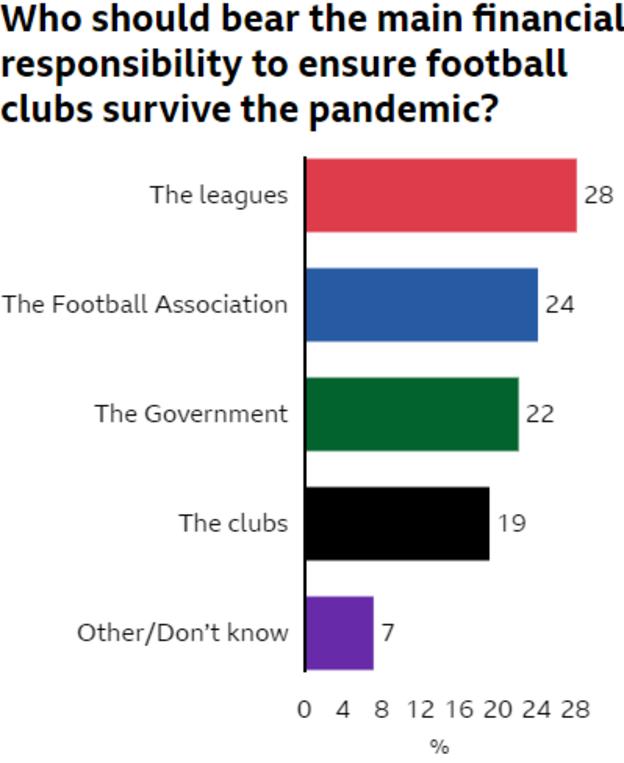 Savanta ComRes interviewed 5,476 UK adults aged 18+ online between 20 and 24 November 2020, 2,100 of whom qualified as football fans for the purpose of our survey according to Savanta-gathered data on football fans and their demographic profile. Data were weighted to be demographically representative of UK adults 18+ by age, gender, region and social grade. Savanta ComRes is a member of the British Polling Council and abides by its rules. The full poll is published here

In Latvia, new technology that could one day prevent asteroids from hitting Earth