Ford Sierra, Nissan Micra and Reliant Rialto will be classic cars in 2022


When most people hear the phrase ‘classic car’ they might think of pre-war Bentleys, old Aston Martins and stunning Ferraris from yesteryear.

They probably don’t think of the Ford Sierra and Nissan Micra.

But they, along with a host of other motors, will soon be honoured with official classic car status – meaning that the wider world will join car enthusiasts in celebrating them.

That’s because they were introduced in 1982 and therefore turn 40 next year – which means the earliest examples will begin to qualify for ‘historic vehicle tax exemption’ in 2022. 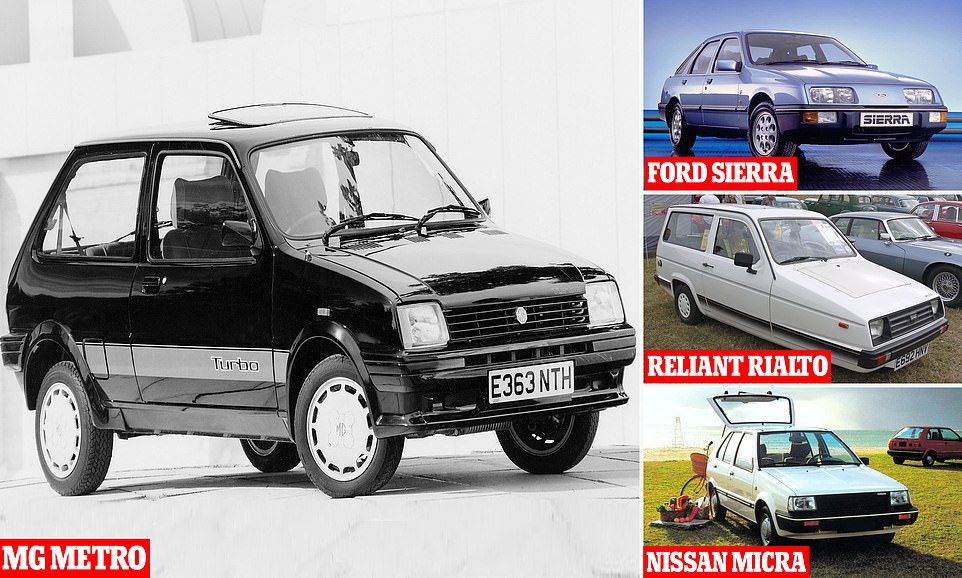 Crap or classic? We cast out verdict on 10 cars that turn 40 next year and officially qualify for historical vehicle taxation

Under Vehicle Excise Duty (VED) rules, any car that was build four decades ago or longer makes them old enough that owners no longer have to pay to tax them each year.

When a car turns 40 it also no longer requires an annual MOT.

We’ve cast our minds back 40 years to identify 10 cars that can now potentially qualify for free car taxation, from unlikely motors to iconic models that also hit the market in 1982 – and rated them as bona fide classics or a little bit crap… 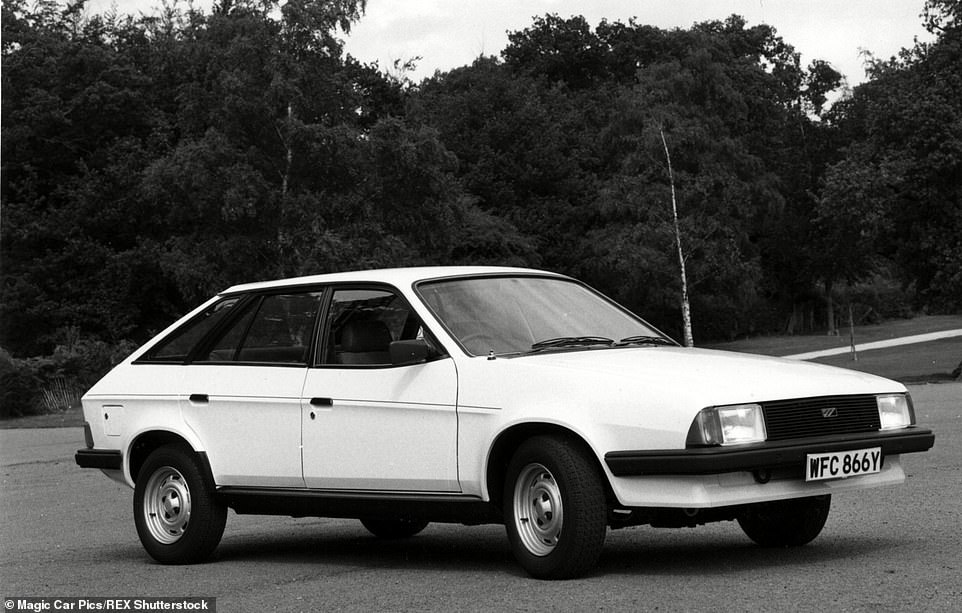 Despite its diplomatic nameplate, the Ambassador wasn’t the best representative to be the face of Austin overseas.

In fact, it didn’t even leave its home country, with every one of the 43,500 cars produced built only in right-hand drive. It couldn’t have had a worse-fitting name if British Leyland tried!

Introduced in 1982, it was a follow-up to the Princess saloon, which at the time had already become grossly unpopular.

A facelift and the addition of a more practical hatchback was considered the ideal solution to reinvigorate sales.

While it shared the wedge-shaped profile of the Princess, almost every panel was new – meaning it was a more expensive project than the British marque had originally expected.

Production ceased in 1984 meaning it was on sale for just two years, with some 43,427 examples built. Just 21 survive today to potentially claim classic status next year. 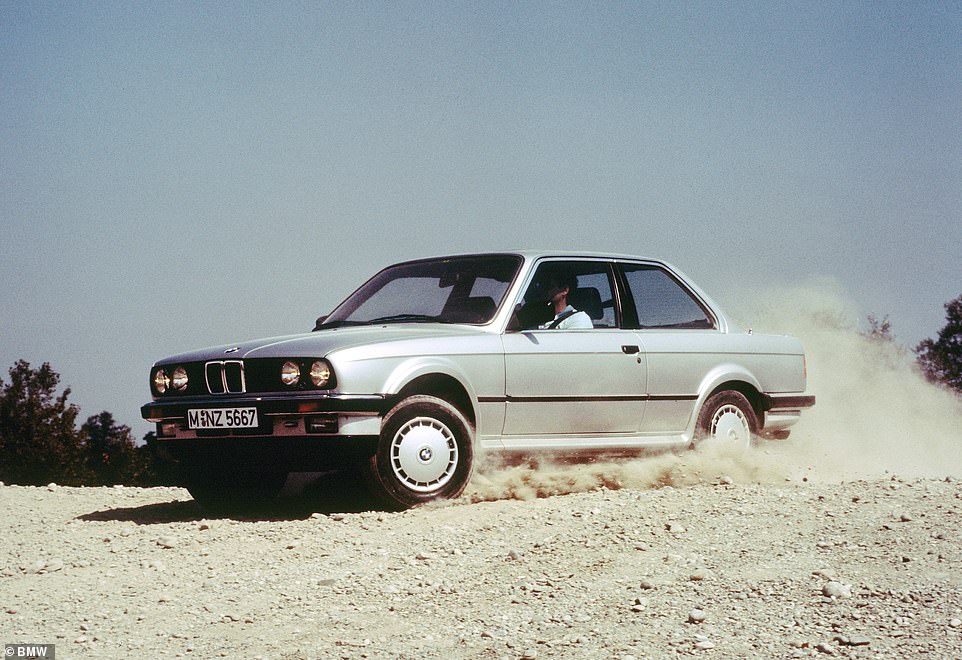 The two-door E30 debuted in 1982, with the second-generation of BMW’s 3 Series being the model that cemented its top dog status is the compact executive saloon class

The year 1982 was the debut for the second-generation 3 Series – also known as the E30 – a car that cemented BMW’s position as market leader in the junior executive sector.

While it was only two-door saloon variants that hit the market in ’82 – the four-door arriving a year later in 1983, convertibles launched in 1985 and ‘Touring’ estates hitting the market in 1987 – it is a worthy addition to our list of motors celebrating 40 years in 2022.

While might have given this car bona fide classic status, that is reserved mostly for models with the right engine. And by right engine, we mean the straight six-cylinder powerplants.

Take a pick of the 320i, 323i and 325i, all of them fantastic drivers’ cars, though it’s the M3 that was the ultimate incarnation of the E30 3 Series – and there are still plenty of examples about.

It remained on sale until 1994 before making way for the third-gen E36. 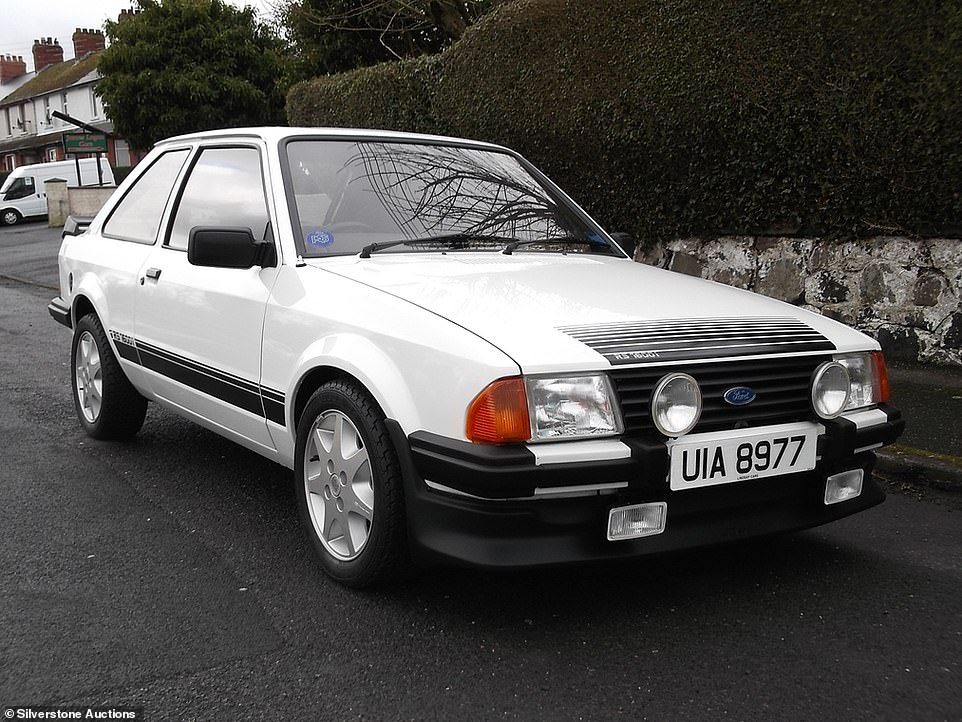 This very example of the RS1600i Escort was sold by Silverstone Auctions in July for over £46,000. Now that’s what you call a Fast Ford

The first of the 1980s-era RS-treatment Fast Fords arrived in 1982 – the Escort RS1600i launched to go head-to-head with the all-conquering VW Golf GTI Mk1.

It was based on the on XR3 variant of the third-generation Escort and – with the addition of fuel injection – was built to meet Group A regulations to compete in rally competitions like its predecessors.

Such was its exclusivity that it was exclusively sold via Rallye Sport dealers, came with a high price tag and limited availability – though the original plan to build 5,000 examples was eventually upped to 8,659 (2,600 for the UK market) by the time production ended.

The 1597cc engine, fitted with Bosch K-Jetronic fuel injection and unique AFT twin coil electronic ignition, produced 115bhp. That was good enough to accelerate from rest to 60mph in 8.3 seconds and to a top speed of 117mph.

How much are they worth today? Silverstone Auctions sold an ultra-low-mileage example in the summer for a whopping £46,125. These are now extremely rare.

Verdict: Bona fide classic (though only if you buy hot versions)

The Sierra – Ford’s iconic family car of the eighties – will turn 40 next year, with examples going on sale in October 1982

The Ford Sierra was first unveiled to the public 22 September 1982 at the British International Motor Show hosted at the NEC in Birmingham and went on sale just one month later.

For a family car offering lots of practicality, its design was ahead of its time.

An ultra-sleek body made it one of the most aerodynamically efficient family cars the world had ever seen.

In fact, only the Porsche 924 sports car and Citroen GS had lower drag coefficient ratings than the Ford at the time. This svelte design also earned it the moniker of the ‘jelly mould’ car.

It was penned by Uwe Bahnsen – the man responsible for the Capri MkI and MkII and Escort MkIII – and, despite polarising opinion proved pretty successful.

Some 160,000 were sold in Britain in the first year it hit showrooms – only the Escort was bought in bigger numbers. Approximately 2,500 are still on the road today, though another 11,000 are believed to be SORN. 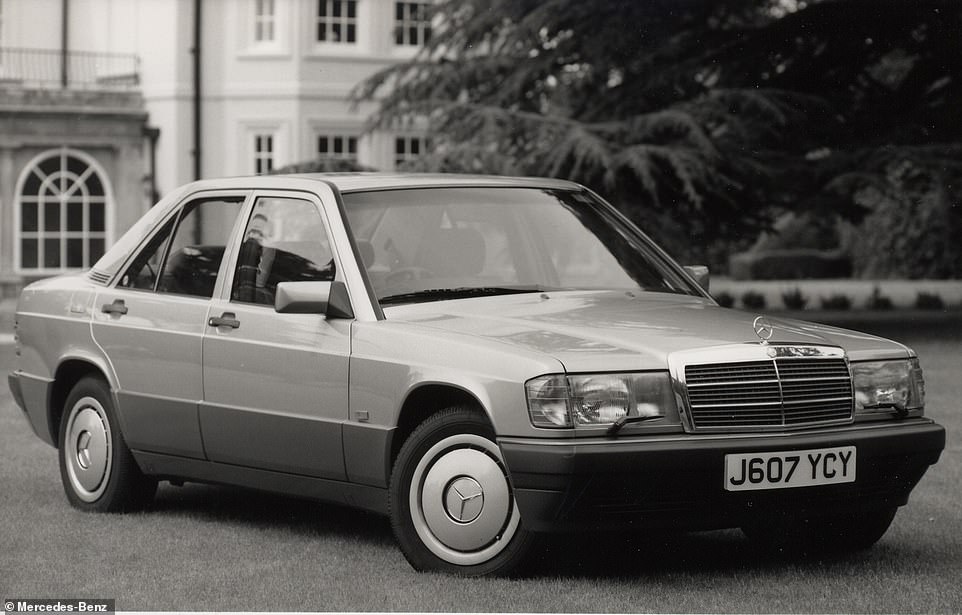 Having seen German rival BMW having great success with its first-generation 3 Series, Mercedes decided it was time to enter the junior executive market with its own offering.

Production ran until 1993 – with the 190 barely getting an update in that 11-year period before – the arrival of the first official C-Class, the W202.

The 190 proved a massive hit, with Mercedes shifting almost two million in total and there are still some – though mostly from the 1990s – still on Britain’s roads.

Even today you can pick up a 190 for a few grand, but if you want a performance model like the 2.3-litre Cosworth, you should expect to pay north of £40,000 for a good one.

And if you go chasing the pinnacle 190, the 2.5 16 Evolution II, be ready to hand over six-figure sums to get your hands on one. 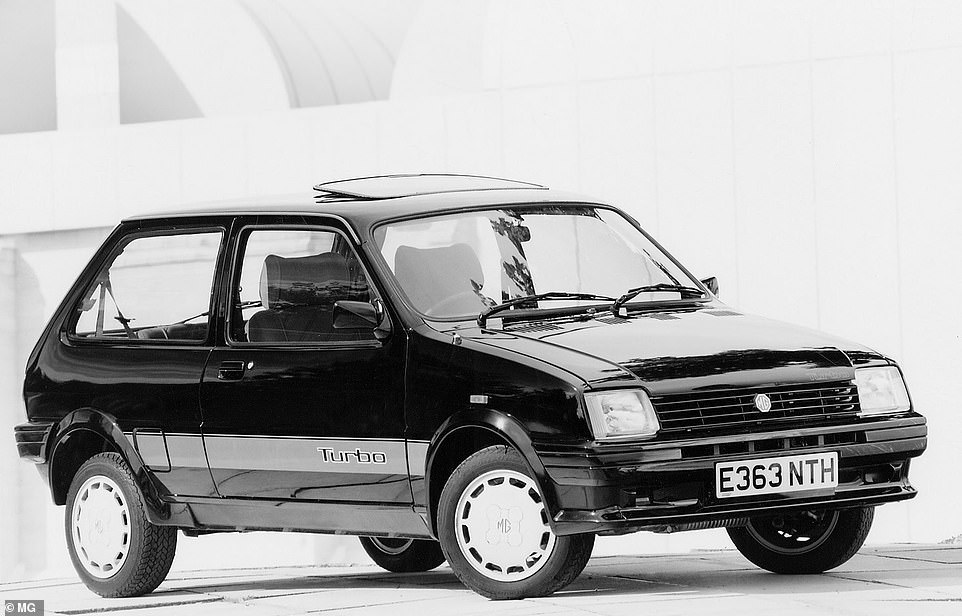 Before the Metro Turbo 1300, MG as a brand had been away for almost two years following the closure of the Abingdon factory, ending production of the iconic MG B.

When the badge return in 1981, it was on a very different car indeed – the Metro supermini.

Rebadging the Austin Metro as an MG brought with it a trim upgrade package – including the addition of red seat belts – and an extra 12bhp eked out of the A-series engine.

But it was a year later when the Metro got tasty, with the creation of the Turbo.

Tuned by Lotus and with the addition of a Garrett T3 turbo, the engine performance was boosted to 93bhp. It was followed by the bonkers Metro 6R4 rally homologation special, of which just 20 road-going examples were built.

Some 27 of the Turbo 1300 remain taxed and registered on the road today with another 100 or so declared as off the road. 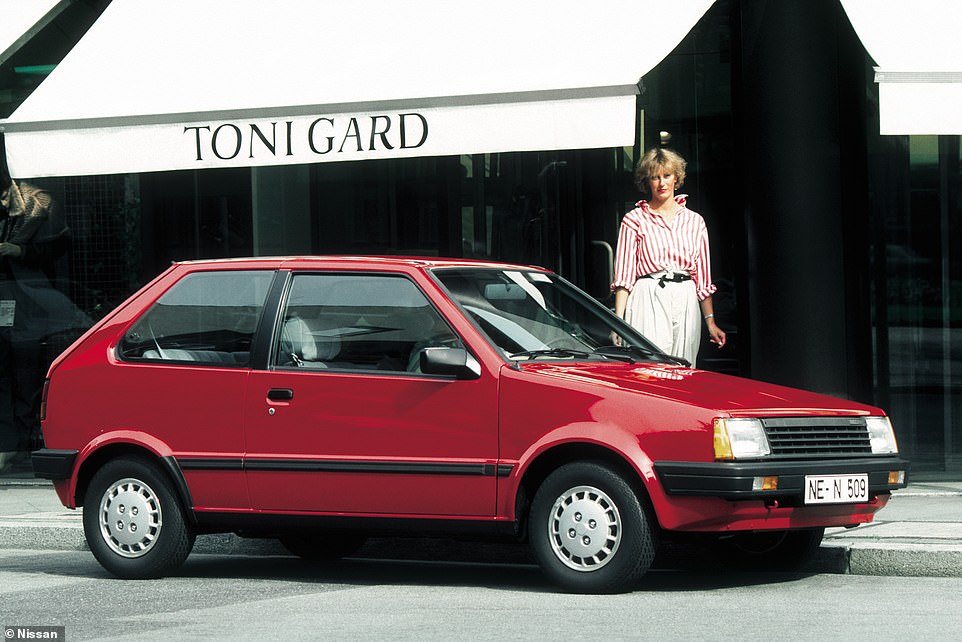 The first Micra arrived in 1982, though didn’t technically hit the European market until a year later as a smaller alternative to the Cherry.

Called the Nissan March in native Japan, it was rebranded the Datsun Micra when it went on sale in the UK and only officially became a Nissan a year later.

When it hit the market it was genuinely considered a game changer.

Lightweight, fitted with an eager 1.0-litre petrol engine, cheap running costs and easy to drive, it won over a youthful consumer base and went on to become one of the most commonly used motors by driving instructors.

But for all its plaudits when it was on sale, the original Micra – nor any version to follow for that fact – has not won a place in motoring history as an iconic model and few survive today. 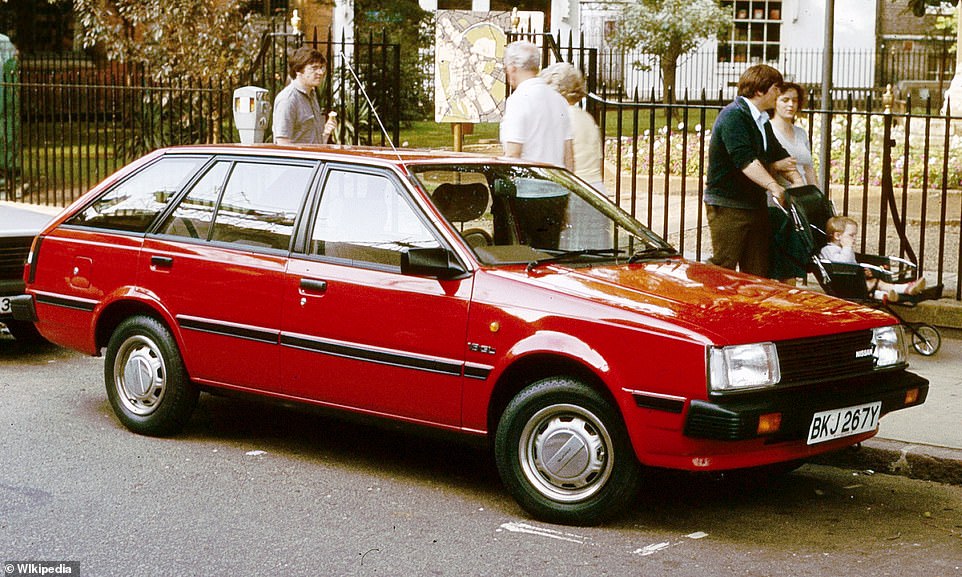 The B11 was the first Nissan Sunny to send power to the front wheels rather than the back and hit the UK market in 1982. It was sold as a saloon, coupe and estate (pictured)

The B11 Sunny market the Japanese brand’s transition to front-wheel-drive cars as it began to move away from the tradition of sending power to the back wheels only – a relatively risky prospect on UK roads covered in snow, ice and rain during the colder months.

It was first launched in the UK in 1982, though sported both Datsun and Nissan badges at the time.

Before it hit UK shores, the Sunny had already established itself as the best-selling motor import, mainly due to its simple engineering and its reputation as an economical and reliable experience.

It came with a more than adequate 1.3-litre petrol engine and a choice of body types, including an estate and a coupe.

Cheaper than British-built models, it wasn’t necessarily great to drive but was attractive on a financial level.  Hardly any are on the road today.

When the Rialto arrived in 1982 it had big shoes to fill, replacing the iconic Robin three-wheeler.

Incredibly, the year of its release it was subject to a 12-month waiting list. It then went on to become one of Reliant’s best-selling models ever, though has never had the same kudos as the legend it replaced.

While it retained the same three-wheeled layout, chassis and most of the components with the Robin, the Reliant did look very different, with a much squarer body and revised interior.

It was sold in various body styles, from saloon to estate, van, hatchback and even a pick-up truck.

There are now some 501 registered on Britain’s roads and 2,500 declared SORN.

Verdict: Neither crap nor classic 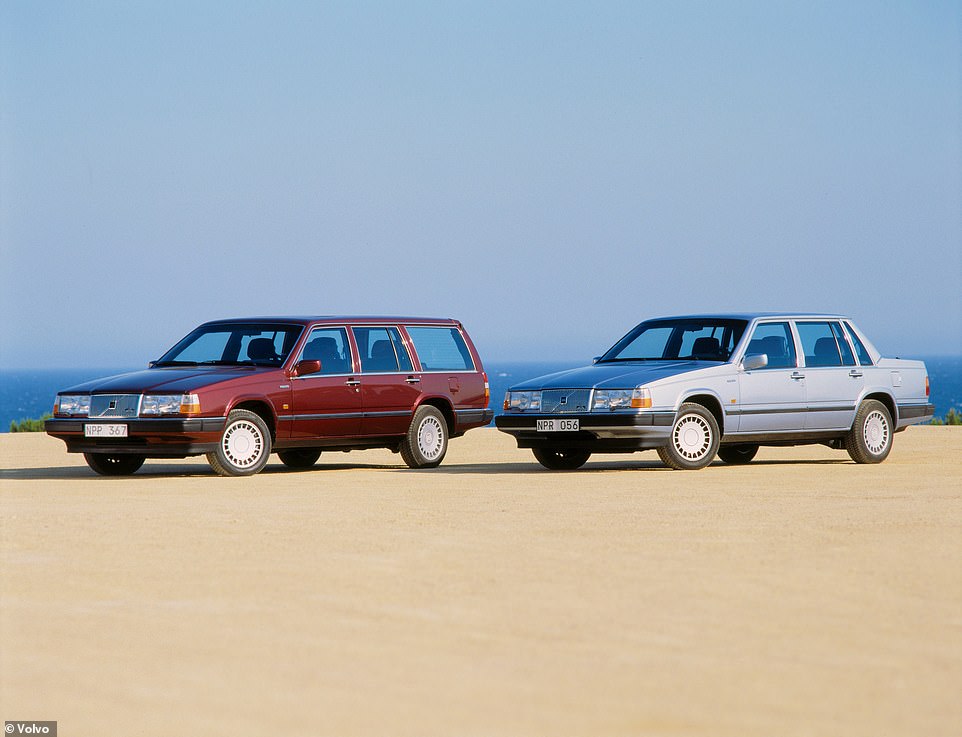 The box-shaped Volvo 760 was introduced in March 1982 and its estate version epitomised the traditional station-wagon silhouette.

At launch it came with a choice of two different engines: a six-cylinder B28E petrol and a turbocharged six-cylinder diesel, called the TD24.

With the TD24 the Volvo 760 GLE accelerated from rest to 62mph in 13 seconds, which – incredibly – at the time made it one the world’s fastest diesel-powered cars.

It will be remembered for its capacious estate body, which made Volvo a market leader in the sector. Its great build quality means many of them covered huge mileage.

Just 152 remain registered on the road in the UK today, though values are usually no higher than £3,000.

bearish formation to define direction in the short term

bearish formation to define direction in the short term