Foreign Secretary Liz Truss has Covid: Minister was sat inches from PM in Commons earlier and was expected to fly to Kiev to discuss Russian aggression

Foreign Secretary Liz Truss has tested positive for coronavirus, hours after she was sat inches away from Boris Johnson in the Commons.

The minister was set to travel to Kyiv, Ukraine, with the Prime Minister on Tuesday in a show of support for the country.

But Ms Truss will miss that trip after she tested positive and will be working from home as she isolates.

The Foreign Secretary tweeted: ‘I tested positive for Covid this evening.

‘Thankfully I’ve had my three jabs and will be working from home while I isolate.’

Earlier today, Ms Truss had been sat on the front bench of the Commons, inches away from Mr Johnson as he delivered a half-apology after the Sue Gray report condemned ‘failures of leadership and judgment’ in Downing Street.

Ms Truss, who was not wearing a face mask, was sat beside Home Secretary Priti Patel and Health Secretary Sajid Javid. 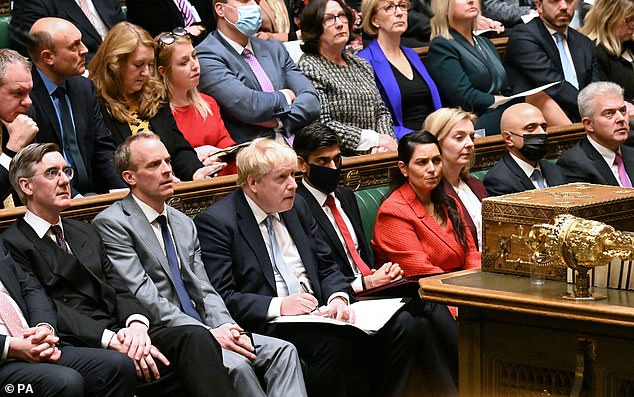 Foreign Secretary Liz Truss has tested positive for coronavirus, hours after she was sat inches away from Boris Johnson in the Commons

The minister was set to travel to Kyiv, Ukraine , with the Prime Minister on Tuesday in a show of support for the country. But those plans will have to change after Ms Truss tweeted that she has Covid

Earlier, Ms Truss announced plans for legislation with new powers to sanction individuals and businesses linked to the Russian state ahead of the visit.

After appearing in the Commons, Ms Truss then later attended a meeting open to all members of the parliamentary Conservative party where the PM addressed MPs and peers to rally support after what was described as a “difficult day”.

The Foreign Secretary had been due on a visit with Mr Johnson on Tuesday, for a meeting with Ukrainian president Volodymyr Zelensky amid rising tensions with Russia.

Downing Street confirmed that the Prime Minister would sidestep the fallout from the Sue Gray Partygate report by travelling to Kyiv.

That journey, which was supposed to be made with Ms Truss, will take place after an expected phone call with Putin today, as tens of thousands of Russian troops maintain their position close to the Ukraine border.

Fears of an imminent Russian incursion in Ukraine have grown in recent days, despite denials from Moscow and pleas from Zelensky to avoid stirring ‘panic’ over the military build-up on the border. 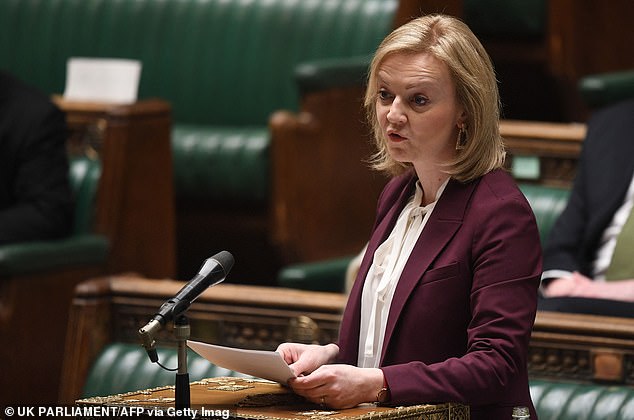 Foreign Secretary Liz Truss making a statement on Russia and Ukraine, in the House of Commons in London on January 31

As well as visiting Ukraine, the Foreign Secretary had planned to head on to Moscow for talks.

Diplomatic efforts are ramping up as Putin-backing oligarchs were warned there will be ‘nowhere to hide’ from new UK sanctions.

The Foreign Office is set to announce details of enhanced measures that could be used against ‘strategic interests’ of the Russian state.

Targets could include financial institutions and energy firms as well as Mr Putin’s wealthy supporters.

Meanwhile, former MI6 chief Sir John Sawers has insisted Russia can be deterred from pushing ahead with an invasion if the West makes clear there will be ‘costs’.