Foreign Secretary Liz Truss will visit Russia ‘within the next fortnight’ 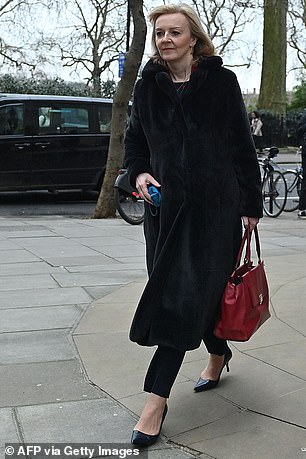 Liz Truss is set to visit Russia as the UK demands Vladimir Putin ‘gets to the table’ to end the increasingly volatile standoff over Ukraine.

The Foreign Secretary has ‘agreed a date’ to go for talks in the next fortnight, according to her Moscow counterpart.

The trip will be the first by a Foreign Secretary to the country since 2017, when Boris Johnson met with foreign minister Sergei Lavrov.

Ms Truss has been forthright in speaking out against Russia’s threatened invasion of Ukraine, and took the unusual step of declassifying intelligence which suggested Mr Putin was plotting to install a pro-Moscow leader as head of the government in Kyiv.

The UK has also been supplying weaponry including anti-tank missiles to Kiev’s forces as they brace for an incursion.

Defence Secretary Ben Wallace confirmed yesterday that he is due to meet his Russian counterpart, Sergei Shoigu, in Moscow soon to discuss the stand-off.

Britain has been urging Mr Putin ‘de-escalate’ the military build-up on the border of Ukraine as the international community steps up retaliation threats in the event of an invasion.

Government minister Chris Philp said Moscow should ‘get to the table’ to resolve the tension peacefully as he warned of ‘very serious’ sanctions should Russian troops make an incursion into neighbouring territory.

It came after US President Joe Biden told Ukrainian counterpart Volodymyr Zelenskyy there is a ‘distinct possibility’ that Russia could take military action against Ukraine in February.

One of the threats Washington has put on the table is to halt the opening of a key gas pipeline, Nord Stream 2, between Russia and western Europe if the Kremlin’s forces advance.

‘We have already agreed on the date. It’ll happen in the next two weeks,’ he said. 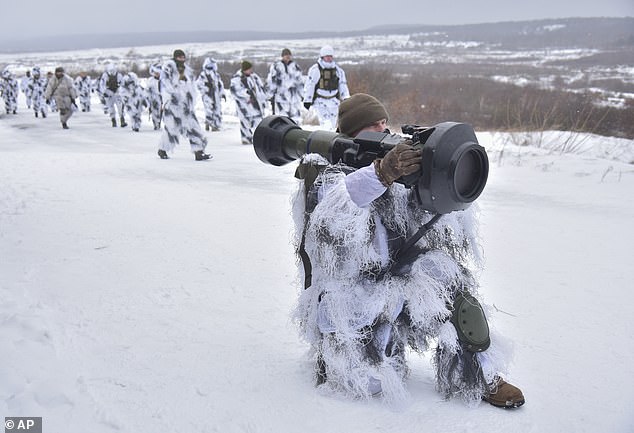 The UK has also been supplying weaponry including anti-tank missiles to Kiev’s forces as they brace for an incursion. Pictured, a Ukrainian soldier takes part in a drill with an NLAW missile 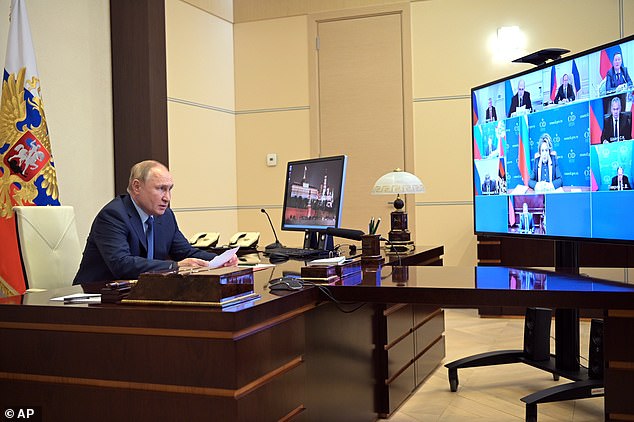 Vladimir Putin chairing a meeting from his residence outside Moscow today

Mr Philp, a minister in the Department for Digital, Culture, Media and Sport, said there is ‘deep concern’ about the ‘unprecedented’ build-up of Russian troops on the border, particularly after units from the east of Russia redeployed to the region.

‘I think it is a very serious situation,’ he told Sky News.

‘I think President Biden and our Prime Minister are right to warn President Putin that the consequences if they do invade Ukraine will be very, very serious indeed for Russia in terms of sanctions.

‘The Americans made clear yesterday that the Nord Stream 2 pipe would not happen if they invade.’

The technology minister said the UK has provided military equipment and training to support the Ukrainians, but pressed for Russia to engage diplomatically and avoid the need for combat.

‘We are urging Russia to get to the table, to discuss issues that are relevant and to de-escalate the situation,’ Mr Philp added.

‘De-escalation is clearly in the interests of all concerned – it is not too late to de-escalate, and that is what now needs to happen.’

Mr Wallace has admitted he is ‘not optimistic’ that a Russian mobilisation into Ukraine can be stopped.

Mr Johnson has used public statements this week to issue a stark warning that a military clash would be a ‘painful, violent and bloody business’ as he called a possible invasion a ‘disastrous step’. 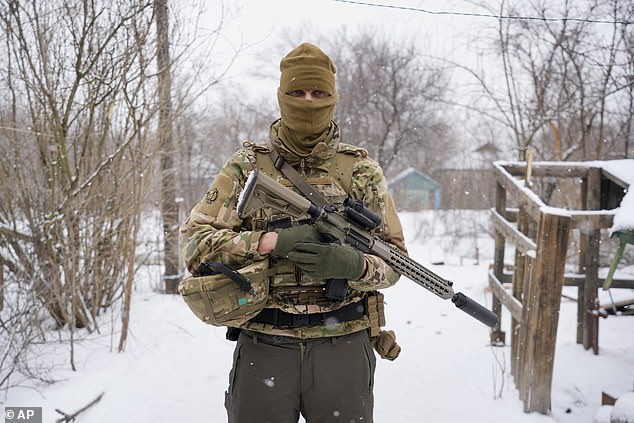 A man won $ 4 million with numbers from a fortune cookie