A former alcoholic and mother-of-two who used to do a shot of vodka for breakfast to ease her anxiety has revealed how she transformed her life and regained her confidence by becoming a ripped lingerie model at age 40.

Nicole Marie from Detroit, Michigan, regularly shows off her gym-honed physique with sexy lingerie shoots uploaded for followers on Instagram and OnlyFans.

But while her life might look glamorous now, it’s been a long journey to get there.

In her early parenting days in 2010, Nicole, then 29, was so overwhelmed by her mental and emotional state while also juggling two jobs that she turned to the bottle. 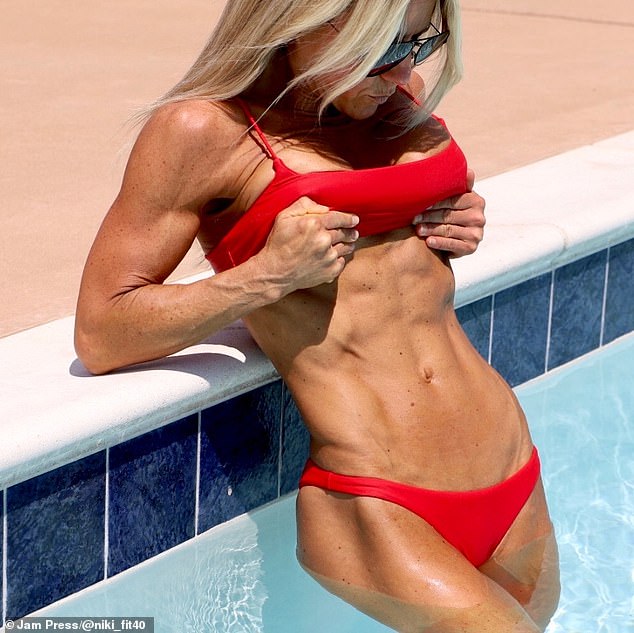 Positive changes: A 40-year-old mother-of-two has revealed how she overcame alcoholism and anxiety to transform her life and forge a new career as a fitness and lingerie model 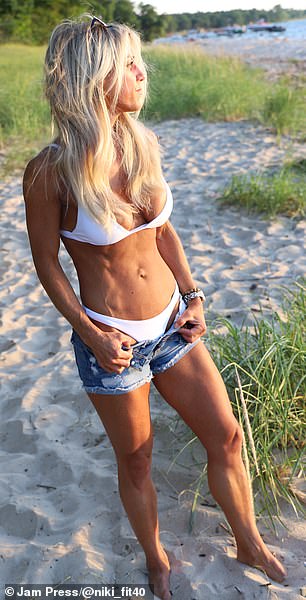 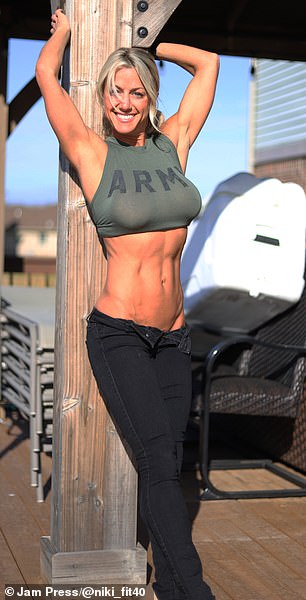 You go girl! Nicole Marie (pictured recently), from Detroit, Michigan, began drinking in her late 20s as a means of coping with the stress and anxiety of juggling motherhood and two jobs 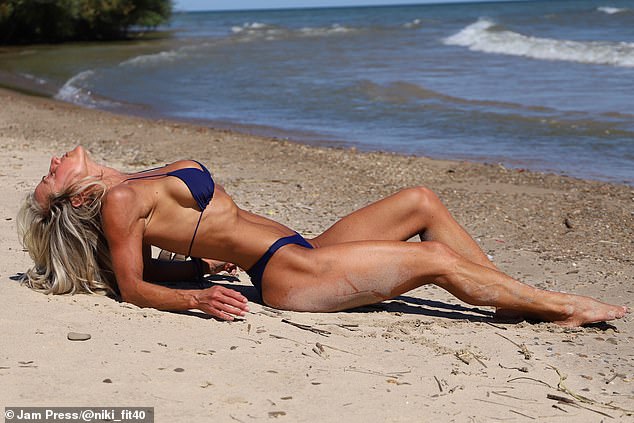 For almost a year, the mom used to do vodka shots in the mornings to help her cope with her hectic life and became so malnourished that her weight dropped to 91lbs.

‘I knew I was out of control when I started to rely on booze to get myself out of bed in the morning with my daughter, who was a toddler at the time,’ she told Jam Press.

‘I look back and I don’t even know how I survived. I was just go-go-go all the time on an empty tank. I wouldn’t eat all day.

‘I would wake up feeling so overwhelmed I felt like I needed a vodka shot just to function.

‘As the day went on, I might have another if I got stressed out again and another before my husband got home from work. I wasn’t coping.

‘I’d do anything to make my daughter happy but my own happiness was at the bottom of the pile. Every day felt like groundhog day.

‘I had rock-bottom self-esteem, I thought I was fat and I just looked and felt exhausted.’

Nicole claims that during all of this, she had to take on the lion’s share of the domestic work at home while also working late nights as a bartender and studying to be a nurse at college.

She said: ‘My family was my entire entity and I wanted to be everything for them. In trying to be the best mother for them, I completely neglected myself. I feel like lots of mothers do that.

‘I see a lot of moms on Facebook and in the media talking about how they are turning to drink because of the pandemic and homeschooling – I know how they feel, I was there once.

‘Every day I would tell myself that I wouldn’t drink but I always would. It was easier than dealing with the reality of my marital and emotional problems.

Unhealthy: Nicole says she would often go a whole day without eating, and she became severely malnourished, with her weight plummeting to just 91lbs (pictured) 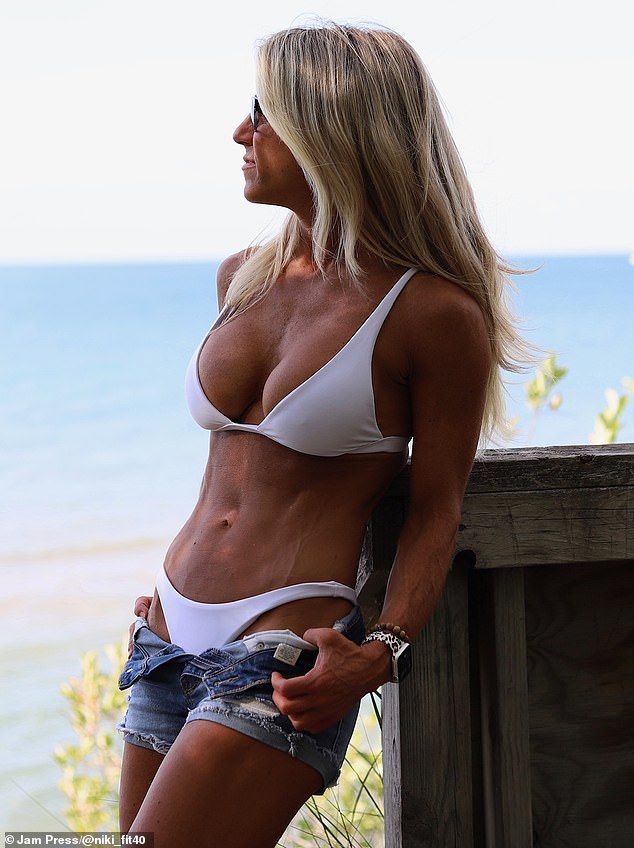 Wake-up call: The model (pictured recently) hit rock bottom when she realized she couldn’t get out of bed to be with her daughter without drinking vodka

‘The shame I felt just made my anxieties worse, which then compounded my drinking. It was a vicious cycle.’

In December 2010, Nicole admitted herself to a three-week rehab program for alcoholism.

She said: ‘My husband [unnamed for privacy reasons] had to work so I asked a family member to take care of our daughter for the time that I was away.

‘We told her I was going away on a course for nursing school.

‘It was hard to leave, but I knew that if I didn’t fix my own issues, I could never be the mother she deserves to have.’

Nicole left rehab sober and went on to have another child, a son, in November 2013.

She said: ‘Fixing the alcoholism only made me realize even more how empty my personal life had become outside of my family.

‘The alcohol dulled the realization that I was empty and now I didn’t have that anymore, so I had to face my reality and work on being a better and happier me.

‘I still had a poor relationship with food and constantly felt exhausted because of the late nights working as a bartender.’

In May 2018, at 37 years old, Nicole says she finally came to terms with what she was putting her body through and she needed to make a lifestyle change beyond giving up alcohol.

She said: ‘I had a moment of realization where I understood that existing was not enough and that I needed to break free from the narrative of mediocrity.

‘I refused to accept a life of simple existence, and sought to better myself. I started to get up at 5am every day and attended an exercise boot camp.

Work: In December 2010, Nicole (pictured recently) admitted herself to a three-week rehab program for alcoholism, and in November 2013 she gave birth to her son 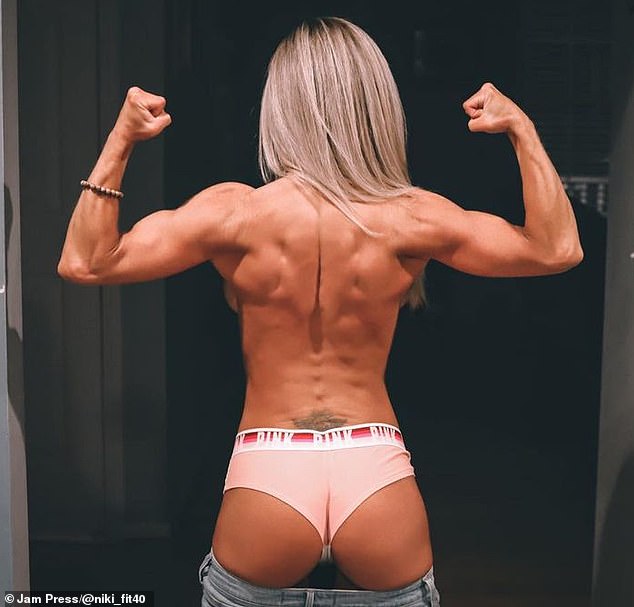 Struggle: At the time, Nicole was working late nights as a bartender and studying to be a nurse at college, while also taking on the majority of the housework and parenting duties

Evolution: Even after giving up alcohol, Nicole struggled to cope with all of her responsibilities – and she realized that she needed to make more changes, including ending her marriage

‘As my body changed and grew stronger, I realized that my emotional fortitude also grew and I evolved into someone who saw value in herself again.’ 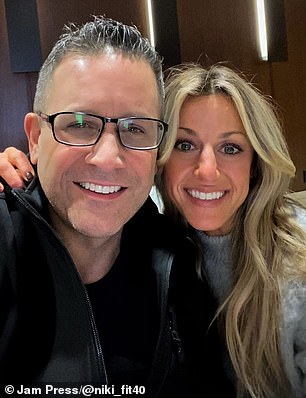 Support: Nicole walked away from her marriage in 2019, and has since found love with a new boyfriend, Mark (pictured)

In June 2019, Nicole ended her marriage to be a better mother for her children.

Eager to carve out a new path in her life, she also made a career change – leaving her bartending job to train as a personal trainer and nutritionist in March 2020.

But while it has boosted her confidence and given the mom an outlet for expressing herself, it has also come with challenges.

She said: ‘I never meant to start an OnlyFans, I never imagined anyone would be interested in seeing me that way.

‘I was looking for more ways to add to my fitness business and I saw a gal on Instagram who had OnlyFans, and contacted her for feedback on what it was.

‘She told me I couldn’t make OnlyFans work because I’m too old. I decided I had to prove to myself that I wasn’t too old to be desirable.

‘I’m proud to express myself in a way that shows my sensual, sexy side. 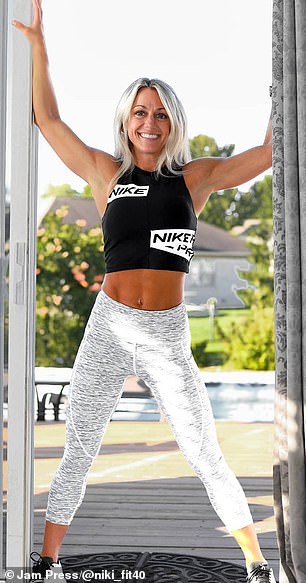 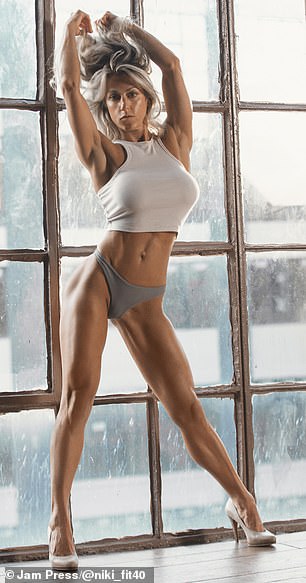 Inside out: In her late 30s, Nicole started working on her overall health that saw her focusing on fitness and diet, which completely transformed her body 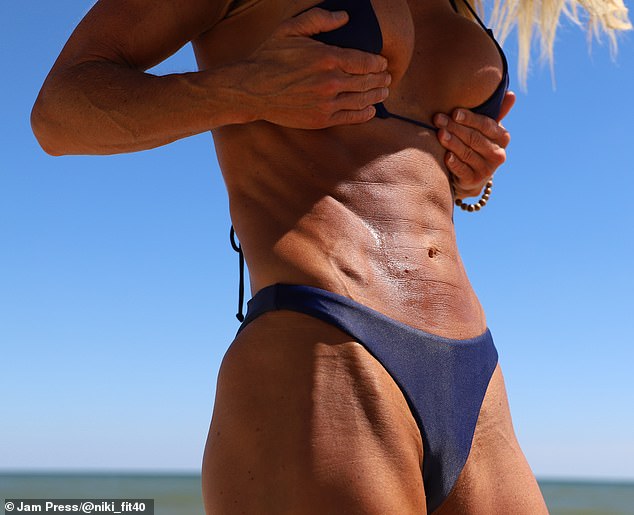 Superstar: She was encouraged to start posting modeling shots on social media and OnlyFans and quickly skyrocketed to popularity

‘Older women shouldn’t be shamed for being sexual. Men are told they are studs at an age and women who act sexy are sluts.

‘I have come a long way and finally feel stronger and more confident than ever. There is no way trolls will stop me showing that off.’

‘I don’t do any of that on my page but I do express myself in a way that shows that it’s okay to be sexual, and the beauty of it instead of feeling shamed.

‘My daughter is 14 now and my son is seven and I am honest with them in an age-appropriate way. My daughter knows about my sexy posts on social media and she supports me.

‘Her friends love that she has a hot, fun mom on TikTok. We can laugh about it together.

‘Now that I’ve taken back control of my life, my anxiety is completely under control and I feel like I have a pathway in my life.

‘I have met a wonderful man who shares my life goals and supports me in a way that allows me to feel like a partner, not a dependent.

‘My children have a mother who is happy and is better equipped to help them navigate through life.

‘I’m thankful for my chance to try and help others get out of the narrative of unhappiness.’

How melting Arctic ice is driving more snow over Europe

Aldi raises the stakes as it launches its festive advert

'Another strong quarter': Walmart adapts to the pandemic, and its sales and profits surge