by souhaib
in Uncategorized
0
ADVERTISEMENT


Former Food and Drug Administration commissioner Dr Scott Gottlieb has urged Pfizer to launch the federal authorization process for its COVID-19 booster shot as soon as possible as the spread of the highly-contagious Delta variant ramps up around the United States.

Gottlieb stressed the importance of starting the process soon on Sunday – three days after Pfizer and its German partner BioNtech announced they are developing an additional booster dose to go with their existing two-shot vaccine.

‘You’re talking about a process that’s probably at least a couple of months long, could take a little bit more time than that,’ Gottlieb told CBS News’ Face the Nation.

‘So, I think starting right now, frankly, is prudent and that’s what’s happening.’ 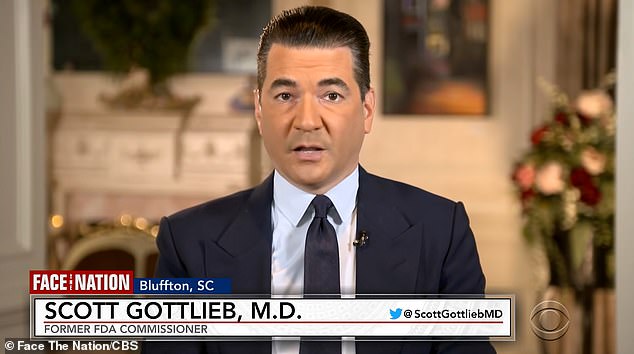 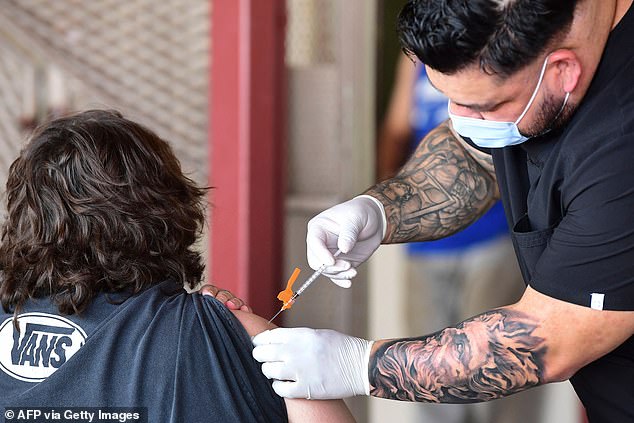 Pfizer and German bio company BioNTech , announced they are currently in the process of developing a booster shot to accompany their two-dose shot vaccine, which would further protect people from additional variants 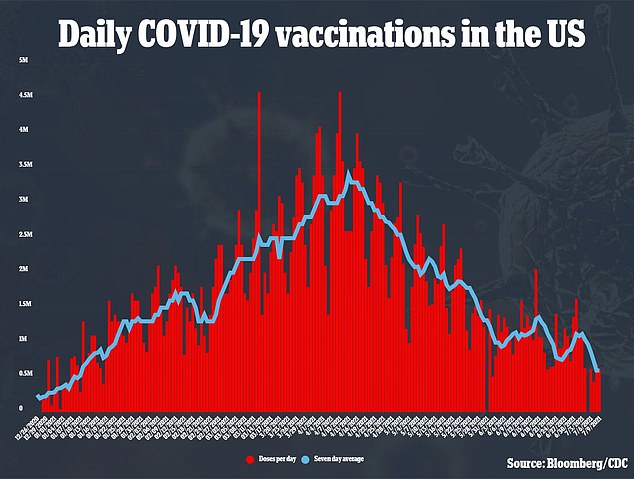 Around 93 percent of COVID-19 cases in recent days have occurred in counties with vaccination rates of less than 40 percent, CDC director Rochelle Walensky told a media briefing on Thursday

Pfizer and BioNTech on Thursday announced the development of the booster which would bolster protection from COVID-19 variants – including the Delta strain that now makes up the majority of new cases in the US.

The plan is to have people take the booster jabs six months after they have their second dose.

It comes after Pfizer and BioNTech recently acknowledged that the immunity given by its two-shot combination already appears to be waning.

Meanwhile, scientific trials of its booster jab show it can generate up to 10 times more neutralizing antibodies than just two doses, Pfizer and BioNTech say.

Pfizer’s CEO Albert Bourla has maintained that people will need a third dose, and that the vaccine could be needed annually like the flu shot.

‘Booster shots will be needed as we believe the virus is not going away,’ Moderna CEO Stéphane Bancel told investors during an earnings call in May. 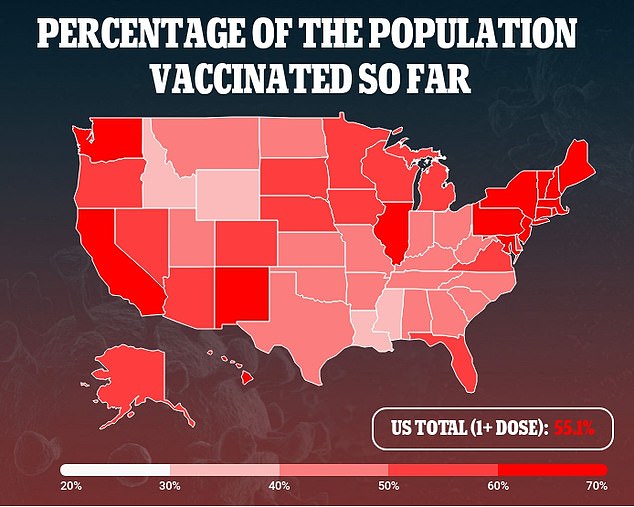 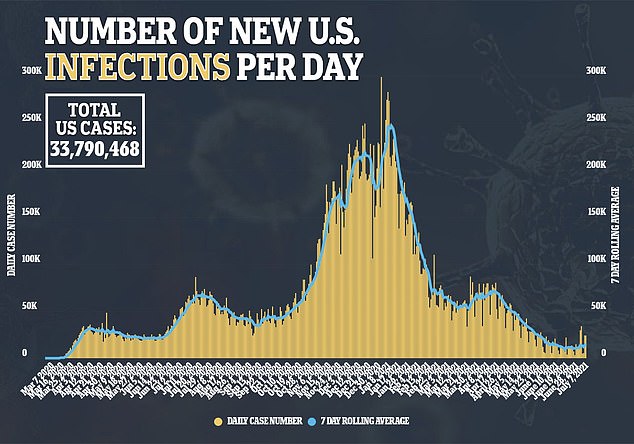 The total number of COVID-19 infections since the start of the pandemic have reached more than 33.7 million in the US

According to CDC data updated Tuesday evening, the Delta variant, also known as B.1.617.2, makes up 51.7 per cent of all new infections.

Health officials say that the fast-spreading Delta variant first identified in India is racing through areas with low vaccination rates, eroding gains made in beating back the virus.

On Friday, the seven-day rolling average of daily new cases was up 47 percent from two weeks ago, and hospitalizations were up 11 percent, according to a DailyMail.com analysis of U.S. Centers for Disease Control and Prevention data.

Around 93 percent of COVID-19 cases in recent days have occurred in counties with vaccination rates of less than 40 percent, CDC director Rochelle Walensky told a media briefing on Thursday.

But while pharmaceutical companies are eager to begin creating booster shots, many health officials argue it would be more beneficial to focus on getting individuals fully vaccinated before attempting to develop a booster.

‘It’s wonderful to have a booster approved for emergency use authorization on the shelf — ready to go any time we need it. But I do not think we need it right now,’ Dr. William Schaffner, a professor at Vanderbilt University School of Medicine, told CNN Friday.

Furthermore, researchers devoted to studying the pandemic have repeatedly warned there is currently no substantial evidence that a third shot is even needed. 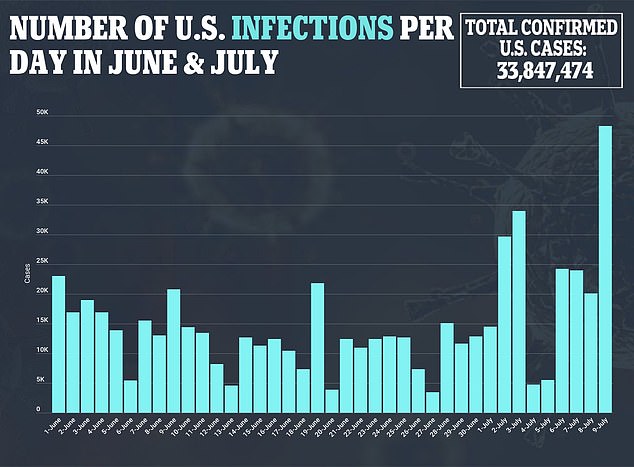 According to CDC data updated Tuesday evening, the Delta variant, also known as B.1.617.2, makes up 51.7 per cent of all new infections 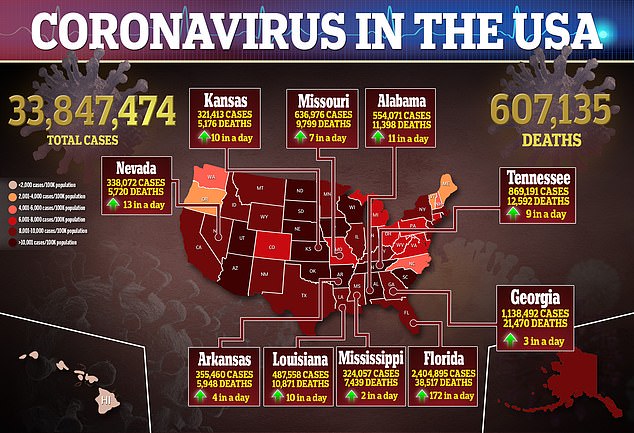 Infections are up from the 26.1 per cent of cases previously linked to the the variant, meaning its prevalence has nearly doubled in two weeks

In an attempt to downplay fears, the US Centers for Disease Control and Prevention (CDC) said that fully-vaccinated Americans do not need a booster shot just yet.

The Advisory Committee on Immunization Practices (ACIP), a committee within the CDC that provides guidance on vaccine-preventable diseases, will be responsible  for issuing the recommendation of what groups of people should receive the booster.

Gottlieb said if there is a recommendation on providing boosters, it will likely be for ‘a select portion of the population who are more than seven or eight months from completing their original vaccination.’

‘It’s not going to be a general recommendation,” said Gottlieb.

The reason behind that theory is because most individuals, particularly those who are younger, will most likely have sufficient protection from their original vaccination and won’t need a booster, Gottlieb said.

Gottlieb’s comments come on the heels of the FDA and CDC reporting that 55.8 per cent of Americans over the age of 12 are fully vaccinated, and therefore do not need to concern themselves with a booster yet.

‘We are prepared for booster doses if and when the science demonstrates that they are needed’, said the CDC and the Food and Drug Administration (FDA) in a joint statement late on Thursday.

While Pfizer and BioNTech made their announcement without releasing any new data, both companies plan to publish new information soon.

Waves price analysis: is now a good time to buy this cryptocurrency? 2021

Desperate search for missing six-year-old boy with Down syndrome in Wallangra, NSW

Waves price analysis: is now a good time to buy this cryptocurrency? 2021

The cryptocurrency market is advancing this trading week; Bitcoin advanced again above the $34000 level, and...