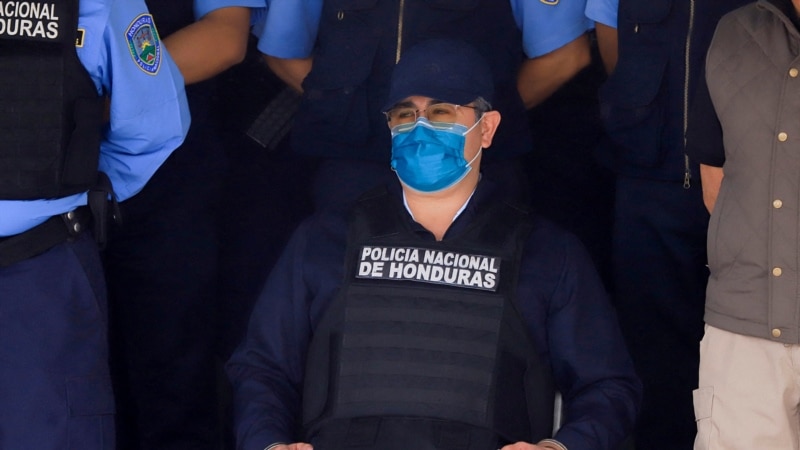 The former president of Honduras, Juan Orlando Hernández, will be extradited this Thursday under a deportation order to the United States, where he will be prosecuted on charges of drug and arms trafficking.

This was announced by the government of the Central American nation in a statement during a press conference on Wednesday night, where it specified that the procedure will take place this Thursday, April 21, at 7:00 in the morning, local time.

“The State of Honduras, in response to the Extradition Agreement that exists with the United States of America and following the legal norm issued by the Supreme Court of Justice through the Natural Judge, will proceed to execute the extradition order of the citizen Juan Orlando Hernández Alvarado” , indicated the text.

Hernández governed Honduras between 2014 and 2022. His brother, former legislator Juan Antonio “Tony” Hernández, was also arrested in November 2018 on drug and arms trafficking charges and later sentenced to life in prison in a federal court in New York.

The extradition of the former Honduran president comes a day after a security drill on Wednesday that raised expectations of a speedy deportation.

The Honduran National Police participated in the operation with two helicopters and two caravans of armored vehicles from the headquarters of a special unit of the same institution, where Hernández has been held since February 15, to the Air Base.

Once in the United States, Hernández will be brought before the same court in the Southern District of New York that convicted his brother.

If found guilty, the 53-year-old former president would face a mandatory minimum sentence of 40 years in prison.

He will be transferred on Thursday on a Drug Enforcement Administration (DEA) plane that will arrive in Honduras on Thursday to carry out the operation, the Reuters agency reported on Wednesday, citing presidential adviser Manuel Zelaya. The aircraft will land at seven in the morning at the Toncontín international airport, Zelaya informed the Honduran television station HCH.

This was reported by Hernández’s family in a text addressed to the national and international community: “The decision has been made to hire the Raymond Colón law firm (…) to defend the former president, father, brother, grandfather and husband, Juan Orlando Hernández, in the courts of South County of New York”.

The text also said that “from this moment on, this law firm will be the only ones authorized to give statements to the media in relation to the case that the US prosecutor’s office has presented” against him.

The family reiterated in the text the argument about “innocence” of the former president and assures that he is being “victim of the revenge of the drug traffickers that he himself extradited or forced to flee to the United States.”

He also indicated that those who have accused him made him “reduce their sentences in exchange for, and based on lies, accusing the former president of committing acts at odds with the law of that country.” The statement states that it is “the lies that will soon be dispelled by the defense team.”

“We trust in the North American justice”, concluded the text that praised his work at the head of the government.

Air bombardment on Gaza and the resistance threatens.. the occupation forces storm Al-Aqsa Mosque for the fifth day and attack the worshipers | Politics news

Air bombardment on Gaza and the resistance threatens.. the occupation forces storm Al-Aqsa Mosque for the fifth day and attack the worshipers | Politics news