Former restaurant boss busted with shotguns, a revolver and £35,000 worth of drugs is jailed


A former restaurant boss who was caught with two sawn-off shotguns, a revolver and £35,000 worth of drugs including crack cocaine and heroin in a holdall bag under his bed has been jailed for nine years.

Raouf Houri, 41, was discovered with the stash of deadly weapons and Class A drugs inside a specially adapted Sports Direct bag at his home in Coventry.

A court heard thousands of pounds worth of crack cocaine and heroin was found inside along with a huge wad of £21,500 in cash and ammunition.

French national Houri pleaded guilty to possession with intent to supply Class A drugs but initially denied any knowledge of the firearms.

However, he changed his plea on the second day of his trial at Warwick Crown Court and was jailed for nine years on Tuesday.

Sentencing, Judge Barry Berlin said: ‘On day two of this trial you pleaded guilty to the possession of prohibited firearms.

‘In my judgement you had these guns for use, should the need arise, in the course of your drug-dealing activities. I accept there were others involved, but you were a significant cog in this enterprise.

‘This is not a case of holding these drugs and firearms as a custodial, but as a significant role. You were plainly deeply involved in drug dealing of Class A drugs.’

Prosecutor Sally Cairns said police went to Houri’s home to arrest another occupant of the house and to execute a search warrant on April 22. 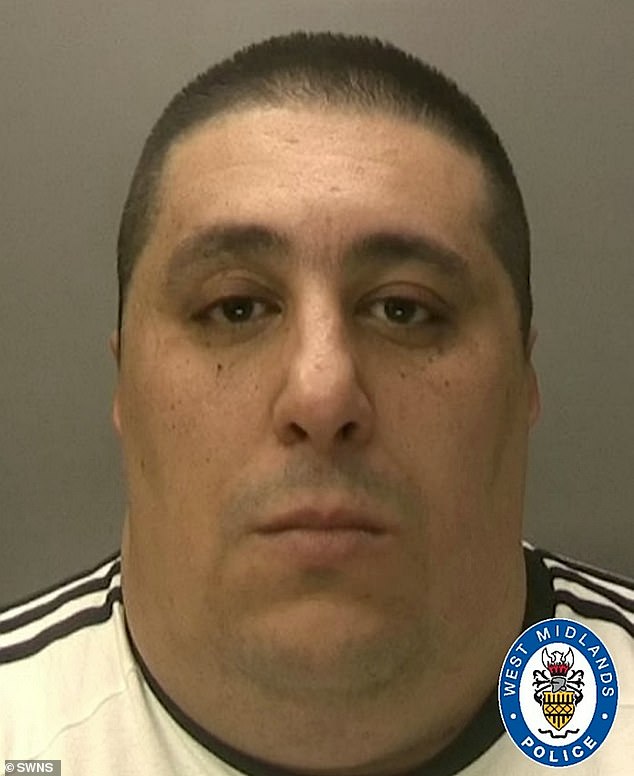 Raouf Houri, 41, was discovered with the stash of deadly weapons and Class A drugs inside a specially adapted Sports Direct bag at his home in Coventry 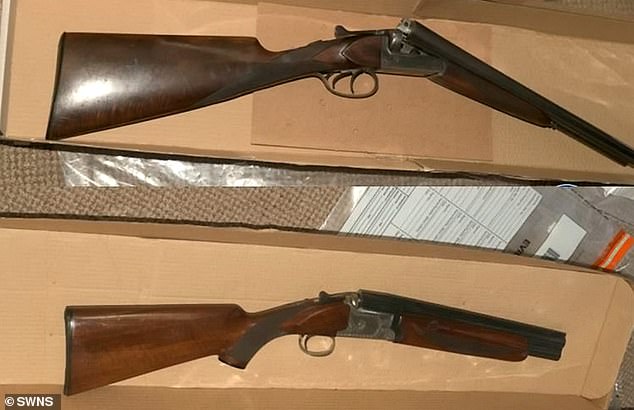 The French national was caught with two sawn-off shotguns, a revolver and £35,000 worth of cocaine and heroin in a holdall bag under his bed

As officers tried to gain entry at the front, others were to the rear of the house where one of them saw a man about the throw a red bag out of an upstairs bedroom window.

On seeing the officers Houri, retreated into the room where, once the police had gained entry, he was arrested.

Under his bed was a red and blue holdall in which the police found a package of heroin weighing 280 grams.

The bag also contained a five-chamber revolver, 51 rounds of ammunition, two of which had been adapted to fit the gun, and two sawn-off shotguns.

Elsewhere in the room was another package of heroin worth £6,200 and a package of cocaine worth a further £700, as well a set of digital scales and clingfilm.

Officers also found £21,490 in cash which will be subject to a hearing under the Proceeds of Crime Act at a later date.

Despite his fingerprints being found on the package of heroin in the holdall, Houri denied knowing anything about the weapons in the same bag.

Seamran Sidhu, defending, said he had entered his guilty pleas on the basis that he was holding the drugs, the guns and the cash for other people.

That was not accepted by Miss Cairns, who said: ‘We say he was dealing drugs to people further down the chain, and that the firearms were part and parcel of his operation.’ 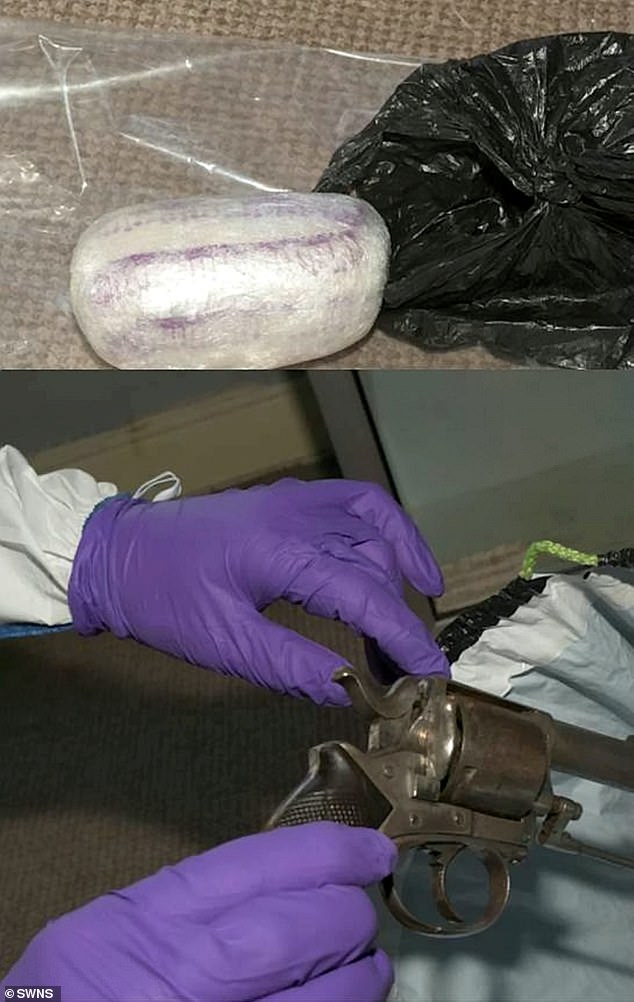 Former restaurant boss Houri was caught with two sawn-off shotguns, a revolver and £35,000 worth of cocaine and heroin in a holdall bag under his bed

She added that Houri had a conviction for trafficking drugs in his native France in 2003 and a caution in this country in 2018 for possessing crack cocaine with intent.

Miss Sidhu said: ‘This began with reports of a firearm being discharged at another address.

‘The person of interest in relation to that caused the police to go to the defendant’s address to arrest that man.

Miss Sidhu said Houri had come to the UK in 2005 and found work at a Coventry hotel where he worked his way up from the kitchen to front-of-house.

He then became a restaurant manager in 2010 before he and his wife set up their own restaurant.

After his relationship ended in 2015 the business began to fail and he turned to alcohol and drugs, and ran into debt.

Miss Sidhu said Houri found out last weekend that his teenage son had been stabbed and taken to hospital – and he feared that may have been because of his debt.

Houri was sentenced to five years for the firearms, with a consecutive four-year term for the drugs after the judge said he had ‘an established business.’

Detective Constable Scott Gould, from West Midlands Police, said afterwards: ‘Houri revealed at court that he had a £400 drugs debt and because of this he had been asked to hold the firearms, drugs and cash.

‘He is now paying a heavy price for the errors of his ways, but not only that, we will be seeking to recover more of his ill-gotten gains under the Proceeds of Crime Act.’