A cheeky little boy was far from angelic in his first nativity play after he spent it swearing at his mortified mother- innocently flashing a ‘v’ while singing about counting two shepherds.

To make matters worse, George then began sticking up his middle finger – after having seen his mum use the gesture as a joke to her fatherJason Campbell, 50, while out driving. 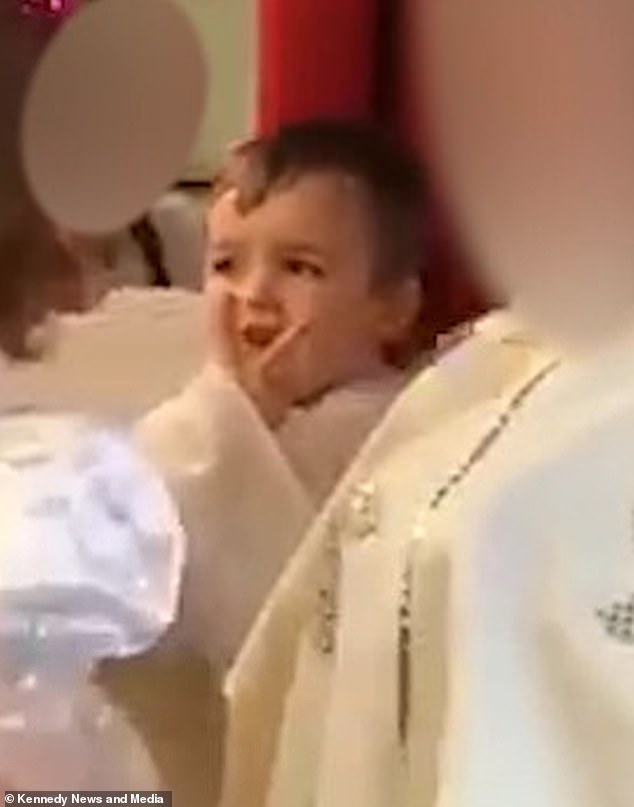 George Sznober, pictured, was performing in his school’s nativity play last year when he raised his two fingers in what could be construed as a rude gesture 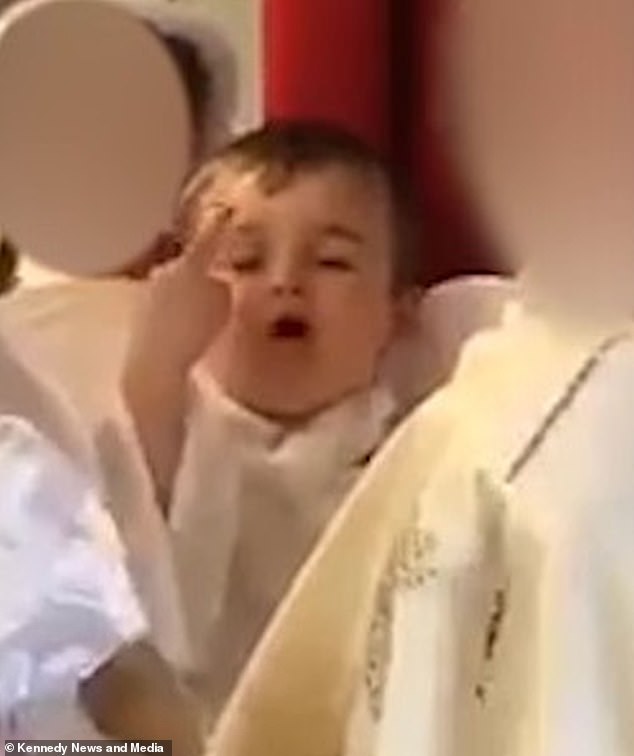 George, who was then aged four, also raises his index finger during a song 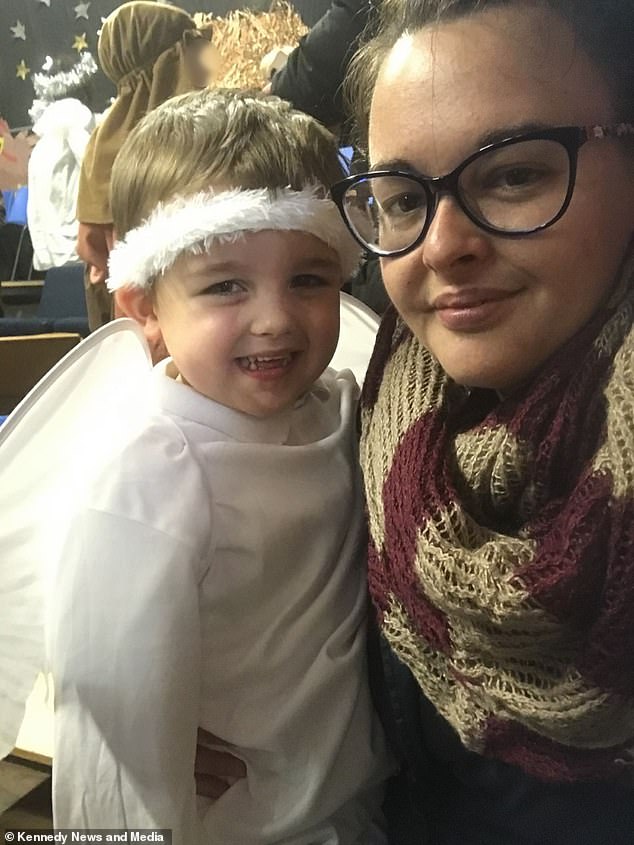 Mary-Anne Campbell, pictured right, with her son George, said she was relieved that his antics had not been seen by fellow parents or teachers

The 27-year-old carer and her mother Serena Campbell, 49, were relieved George’s antics didn’t attract the attention of other parents and teachers.

However hilarious footage captures George innocently flicking his two fingers up while singing ‘two’ and then chuckling mischievously when he begins flipping the bird in the direction of the crowd.

‘He put two fingers up, which was to do with the song.

‘Then when he got to one little shepherd he first used his index finger then slyly stuck his finger up on stage at me, he knew exactly what he was doing.

‘He did that, not once but twice, after he saw us laughing. I just remember thinking “oh my god”.

‘When he stopped doing it he carried on singing and laughing. I didn’t bring it up afterwards because I didn’t want him to start doing it again.

‘George is a bit of a comedian, if he thinks something’s funny he’ll carry on.’ 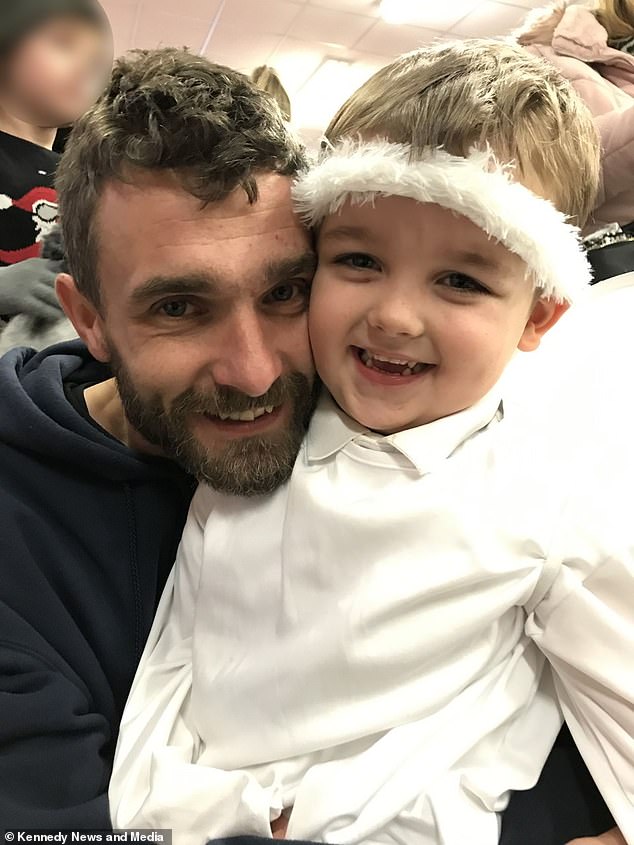 Ms Campbell, said her son George, pictured his his father Lee Sznober, left, is a ‘bit of a comedian’

Hilarious footage shows George, then four, in a white outfit and wings enthusiastically singing along to the song. While acting out the lyrics he innocently sticks two fingers up, but when it gets to the number one he cheekily flips his middle finger. The confident performance was in stark contrast to the earlier showing of the play where George got stage fright and was unable to perform at all.

Ms Campbell, who lives with self-employed landscape gardener partner Lee Sznober, 39, said: ‘He was in reception and he was very excited to be an angel in the nativity play.

‘They had two nativities last year but parents could only go and watch one. ‘He had stage fright and was a bit nervous and upset during the first show, he didn’t really do anything or sing so I asked if I could go and watch the second one too.

‘He was more into it during the second one and that’s when he stuck his finger up.

‘It’s a fun family joke that when I pass my dad in the car I flash my headlights and I flip the bird.

‘When we’re driving in the car I’ll go “oh there’s grandad” and all the fingers go up in the car. 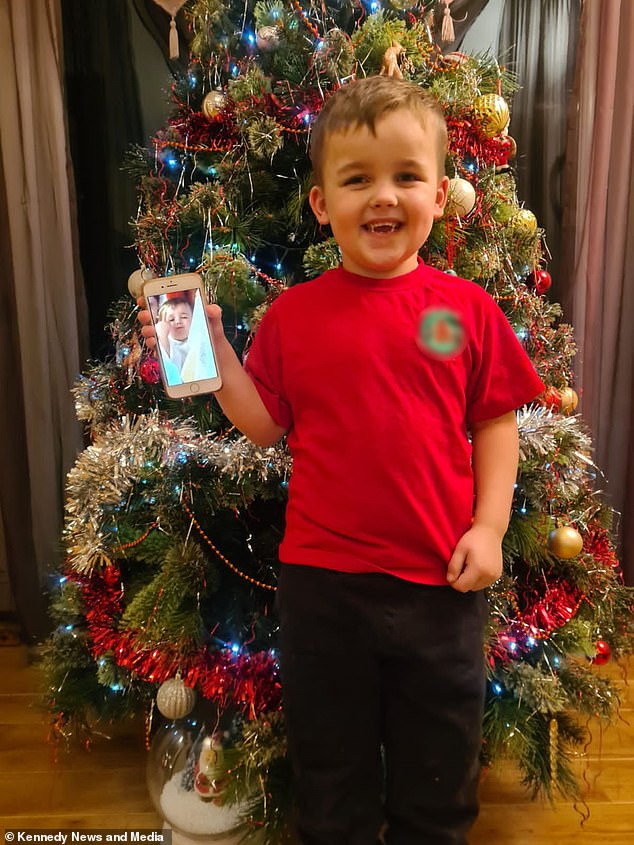 ‘I’ve no idea how it started, it’s been going on for years and years, the children just copy and join in. it sounds awful but that’s just how it’s gone.

‘He knows not to do it to anybody else, it was just one of those moments, I don’t think anybody else saw him.’

She said: ‘This year’s different as there are no nativities.

‘When my friends and family saw the video they were all laughing, it was all taken in good fun.

‘We’ll have to wait until next year to see if there’s a repeat performance.’ 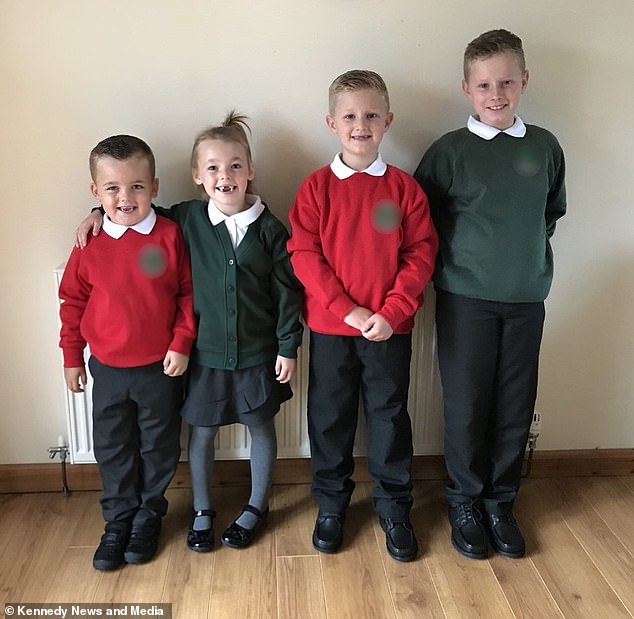 As COVID-19 wanes, employees want more from work, including child care and flexibility