France beat Finland with Griezmann’s goal in the first half.. Video 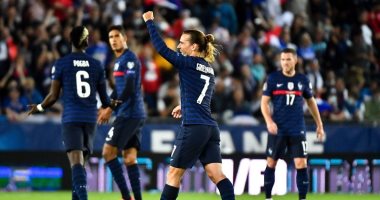 France beat Finland 1-0 at the end of the first half of the match they are currently meeting at Stade de France, in the sixth round of Group D of European qualifiers for the 2022 World Cup.

Antoine Griezmann, recently returning to his former club, Atletico Madrid, scored the France national team goal in the 25th minute of the match, after receiving a pass from Karim Benzema, and hitting it in a superb way to the left of the Finnish goalkeeper.