Frankie Dettori believes his best chances of success at the strangest Breeders’ Cup ever run will come on the day one card at Keeneland in Kentucky.

Victory on either Ralph Beckett-trained New Mandate in the Juvenile Turf or Wesley Ward’s Campanelle in the Juvenile Fillies Turf would be a 15th for the 49-year-old at the meeting that likes to present itself as the world championships of racing.

That would put Dettori joint third in the all-time Breeders’ Cup jockey list with Jerry Bailey. Only Mike Smith (26) and John Velasquez (16) have ridden more. 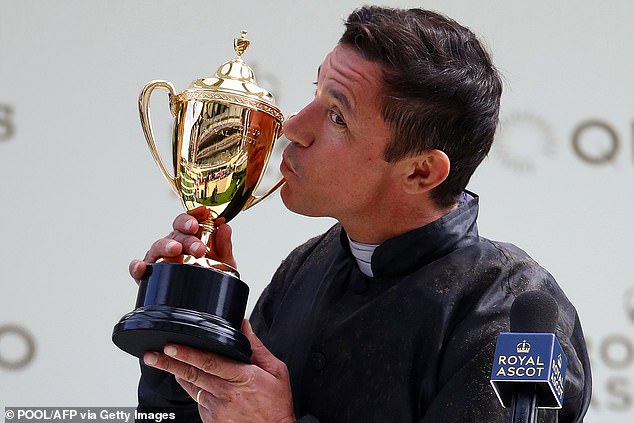 Frankie Dettori, pictured with the Gold Cup in June, is targeting a 15th Breeders’ cup win

Conditions at Keeneland will be in stark much different to 2015, the one time the meeting has previously been held at the venue, when there was heavy rain right throughout the build-up, something blamed for the narrow defeat of Dettori-ridden Derby and Arc winner Golden Horn by Aidan O’Brien’s Found in the Turf.

Dettori said: ‘I love this meeting – it’s different this year but we have to get on with it. I went into Lexington to get my covid-19 test done and it was like a ghost town.

‘At least on race days you are doing something so I can’t wait to get started. Everybody is saying the Turf track is fast. That’s what Keeneland is like usually apart from when Golden Horn got beat in the horrible ground!

‘I am pretty well drawn in most races and that’s the best you can ask for. It doesn’t make them win but it does help. If you’re drawn widest of all in 14 you know before the start it’s going to be tough.’ 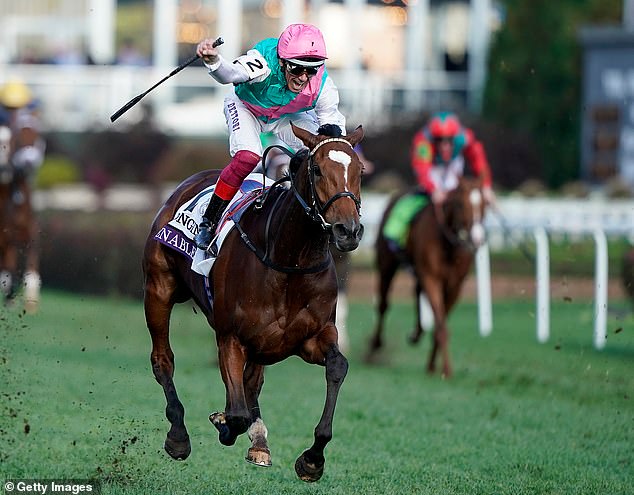 Campanelle, winner of the Queen Mary Stakes at Royal Ascot, followed that with a win in the Group One Prix Morny under a well-judged Dettori front-running ride on soft ground at Deauville in August when she beat Nando Parrado two lengths.

At 9-2, Campanelle is the shortest-priced of Dettori’s five mounts over the two days with New Mandate a 7-1 shot after progressing from handicaps to a professional win in the Group Two Royal Lodge Stakes at Newmarket on his last run.

Dettori said: ‘I would say those two are my best chances. They both come into their races with good profiles. We know what Campanelle can do form wise.. The mile distance is a question mark but the it’s a stiff six furlongs at Deauville and Keeneland is a very fast track. It should be within her compass.

‘New Mandate and he has surprise us a bit. He has turned out a lot better than we thought. He has had a few runs, is battle-hardened and has raced around a bend at Sandown so he is interesting.’ 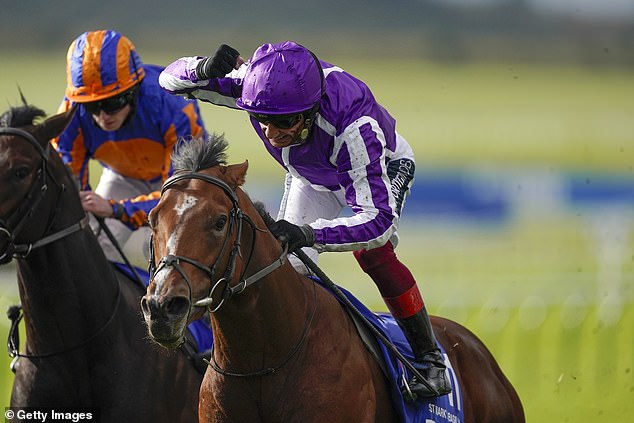 Dettori’s rides on Saturday include John Gosden-trained Prince of Wales Stakes winner Lord North in the Turf, traditionally the best race at the meeting for the Europeans.

The jockey added: ‘He has a chance but he is a 10-1 shot and that is what he should be. He is taking on the best – Prix Vermeille winner Tarnawa, the Grand Prix de Paris winner Mogul and Magical. You only need Enable in there and it is one of the best races in the world!’

It will be disappointing if there is not a European winner of the Juvenile Turf given the starters also include O’Brien’s Royal Ascot and Glorious Goodwood winner Battleground, a son of Found, plus Jessica Harrington’s Cadillac, who should appreciate the step back up to a mile after his fifth in the Dewhurst Stakes at Newmarket, plus runaway France’s Prix Jean Luc Lagardere winner Sealiway.

There is also a first Breeders’ Cup ride for Hollie Doyle on Mighty Gurkha in the Juvenile Turf Sprint. The Archie Watson-trained Sirenia Stakes winner is drawn one and will have to be out of the stalls like a bullet to live with the US speedsters.

North Korea: Going back in time with Pyongyang's austere hotels

Russian Center: The antibody medicine to treat Corona will not be available in pharmacies

Are the Astros the best team in baseball?USA TODAY Sports' Bob Nightengale explains why the Astros...