French fisherman have been left furious over government plans to give them £50million in compensation payments – a move which they say is surrendering to the British in the post-Brexit fishing licences row.

France’s Maritime Minister Annick Girardin said France is preparing to pay French fisherman who have been left without a licence up to £50million (60million euros) to help with their finances.

But the French skippers have lashed out at the plans, accusing the government of ‘abandoning them’ and ‘lowering its pants’ to Britain over the post-Brexit fishing row.

They also accused France of admitting defeat despite Girardin insisting that the government will continue its ‘fight every day’ to get 150 post-Brexit fishing licences they are still short of.

‘The defeat was predictable. It’s a fiasco,’ Pascal Delacour, the boss of a trawler in Granville, told AFP. ‘France has lowered its pants and abandoned its young sailors because it is above all they who do not have the licences.’

‘France is lowering its pants,’ said Alain Coudray, the president of the Côtes-d’Armor fisheries committee. ‘With the English we must not give up a centimeter, you have to show your teeth, otherwise…’

The dispute centres on the issuance of licences to fish in territorial waters six to 12 nautical miles off Britain’s shores, as well as in the seas off Jersey, a crown dependency in the English Channel.

The neighbours have been at loggerheads over the number of licences London allocated to French fishing boats after Britain left the European Union. France says many are missing, while London says it is respecting the deal. 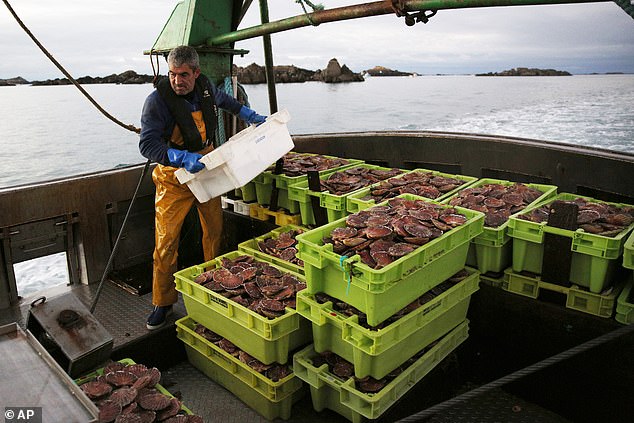 France said it is still waiting for 150 vessels to get fishing licences so that they can fish in British waters.

‘We will continue to fight every day to get what should be ours and so that those 150 licences arrive,’ Girardin told France Inter radio.

But at the same time, Girardin said that the government is preparing compensation packages for fishermen left without licences – a move which critics say is admitting defeat.

‘I can tell you that we will have a package worth at least 40 million euros (£33million) to help with their finances,’ she said.

Girardin on Thursday criticised Jersey for not fully co-operating on the post-Brexit fishing licences.

French Maritime Minister Annick Girardin told a meeting of the French fishing industry at Finistere, Brittany, on Thursday that she regretted Jersey’s ‘limited willingness’ to co-operate with France and that compensation packages were being prepared.

‘It is obvious beyond doubt that Jersey is not respecting the Brexit deal,’ French Maritime Minister Annick Girardin said.

‘Worse, it is showing an unwillingness to cooperate with us,’ she added. 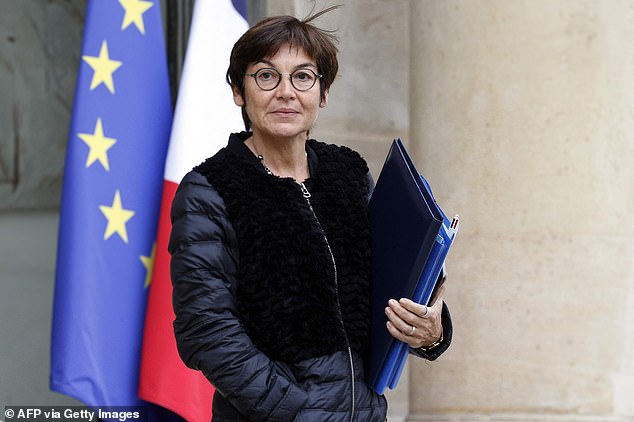 She said that 46 requests for licences from French fisherman had received no reply from the Jersey authorities, while another 52 licences had expired at the end of October ‘denying these fishermen access to Jersey waters.’

She said the government was preparing a rescue plan of 40 to 60 million euros (£33-50 million) for French boat owners being forced to remain in port due to the loss of licenses.

‘I hate talking about the idea of financing boats that don’t go out to sea as much as you do, but in all transparency we do need to organise the possibility of fleet reductions,’ she said.

The plan raised alarm among fishermen and local officials, who saw it as an ominous sign that France would fail in convincing Jersey to comply with the post-Brexit trade accords. 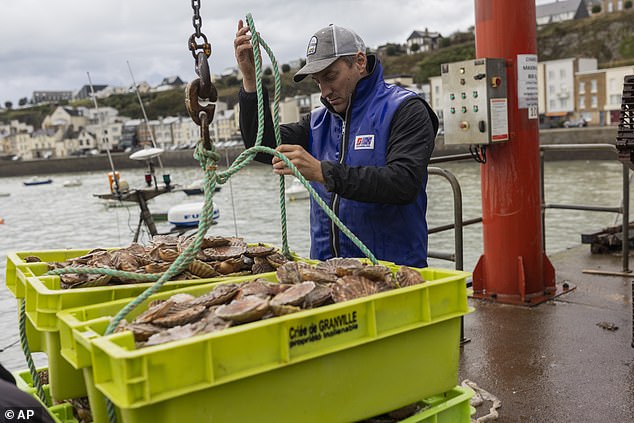 ‘The battle is not lost, and negotiations are not over… I cannot accept that we start a massive move to destroy boats,’ said Loig Chesnais-Girard, president of the Brittany region.

‘We need diplomacy and the capacity to carry through with these talks so that the agreement is respected, because you know as well as I, if we give up on this, there will be other issues’ subject to post-Brexit dispute, he said.

At the end of October, France threatened to ban British boats from unloading their catches at French ports and to subject all British imports to inspections, raising the prospect of a trade war between the neighbours.

Girardin has previously raised the possibility of restricting electricity exports to Jersey, which depends on the French mainland for its power.

Several rounds of talks between the British and French governments this month had soothed tensions and staved off the threat of sanctions, but without finding a durable solution.

France views Britain and Jersey as unfairly targeting French boats by either denying them licences or failing to respond to requests, undermining the deal between Britain and the European Union which guaranteed EU fishermen continuing access to British waters.

Britain and Jersey deny the accusations and say that the rejected French boats have been unable to prove that they previously fished in UK waters, now a condition for obtaining a license.

Analysts say relations between Britain and France are at their lowest in decades due to tensions over Brexit as well as cross-Channel migration. 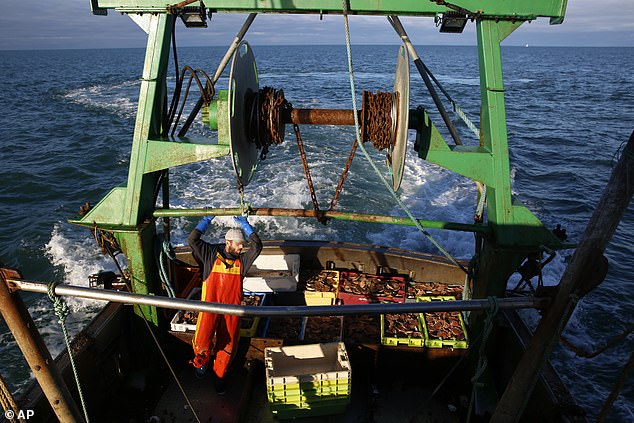 France views Britain and Jersey as unfairly targeting French boats by either denying them licences or failing to respond to requests, undermining the deal between Britain and the European Union which guaranteed EU fishermen continuing access to British waters

Paris was also furious with London after learning it had taken part in secret talks with the US and Australia to form an Indo-Pacific defence pact, which saw Canberra scrap a huge submarine order from France.

Tension over the fishing licences prompted both Britain and France to dispatch maritime vessels off the shores of Jersey this year, with France briefly seizing in October a British fishing boat that had been in its waters.

The all-important U.K. licenses are at the center of the dispute following Britain’s split with the European Union earlier this year. Before Brexit, French fishermen could fish deep inside British waters.

Now they need to be granted a special license from the British government or the self-governing British Crown dependencies of Jersey and Guernsey to fish in certain areas.

Fishing is a tiny industry economically, but one that looms large symbolically for both Britain and France, which have long and cherished maritime traditions.

Paris says many vessels have been denied permits for waters where they have long sailed. Britain contends that it has granted 98% of applications from EU vessels — and now the dispute concerns just a few dozen French boats with insufficient paperwork.

France has threatened to bar British boats from some of its ports and tighten checks on vessels and trucks carrying British goods if more French vessels aren’t licensed to fish in U.K. waters soon. Paris has also suggested it might restrict energy supplies to the Channel Islands, which are heavily dependent on French electricity.

While the dispute has threatened cross-Channel relations, it also has real consequences for France’s ordinary unsung fishermen.

Jersey, which is only 14 miles off the coast of France, issued earlier this week 49 temporary licenses to French boats. But that represents just a fraction of those still unlicensed.

Many fishermen in northern France say their livelihoods depend on access to British waters, where they chase mackerel, whiting, squid and other species. Outrequin is despondent about the future, and lays hope in French President Emmanuel Macron.

Macron is expected to seek re-election in April’s presidential vote in France, and will likely be wanting to project an image of strength and steadfastness ahead of that. 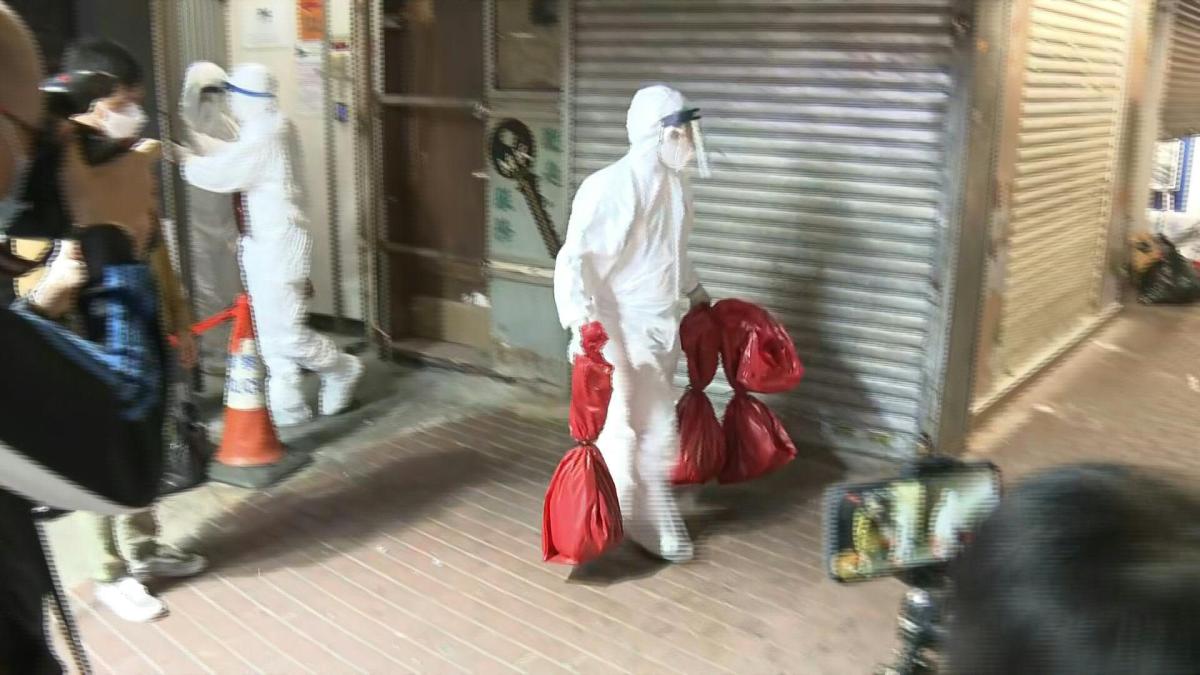