French journalist under police protection after documentary on radical Islam 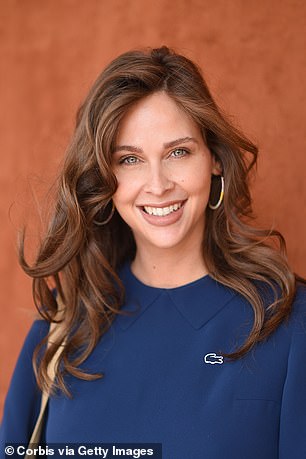 A journalist has been given police protection after presenting a documentary on the impact of radical Islam on a French town.

Ophélie Meunier, 34, has received death threats for her part in Zone Interdite, a hard-hitting documentary which focused on the poor northern town of Roubaix.

The programme highlighted a restaurant with cubicles for women to eat in, without being seen by men, and a toy shop which sold faceless dolls for Muslims who follow the Islamic ruling which forbids the depiction of facial features of any kind.

Officials shut down the restaurant featured, Le Familial, after the programme aired on ‘health and safety grounds’.

Locals of Roubaix argued that the cubicles were not just available to Muslim women, but to everyone.

It also brought attention to a local council payout of €64,640 (£53,715), granted to an ‘association’ to help teach poorer pupils in Roubaix, which was later accused by prosecutors of being used for offering Islamic education instead.

In a clip shared on Zone Interdite’s official Twitter page, specialist in radical Islam Professor Bernard Rougier holds the faceless dolls and teddy-bears as he explains: ‘It’s a way to show that from childhood, you will be a better muslim than others, and implies, others are not good or true Muslims.

‘And so it is the introduction of an ideological principle into the world of childhood… in that sense it is quite worrying, yes.’

The hidden-camera footage shows the undercover reporter going into the shops selling the dolls, which also offer books with the same imagery. 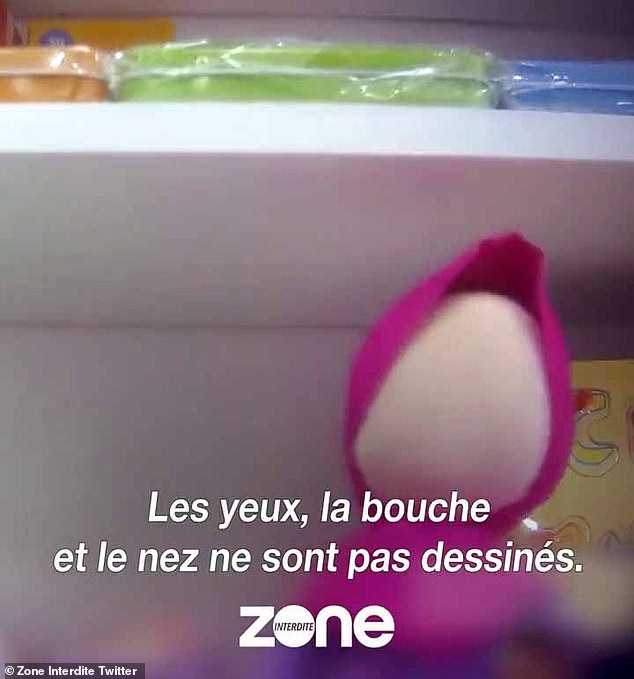 In a clip shared on Zone Interdite’s Twitter page, they show secret footage in a Roubaix toy shop of faceless dolls being sold in order to respect an ultra-radical version of Islam that prohibits the representation of human beings 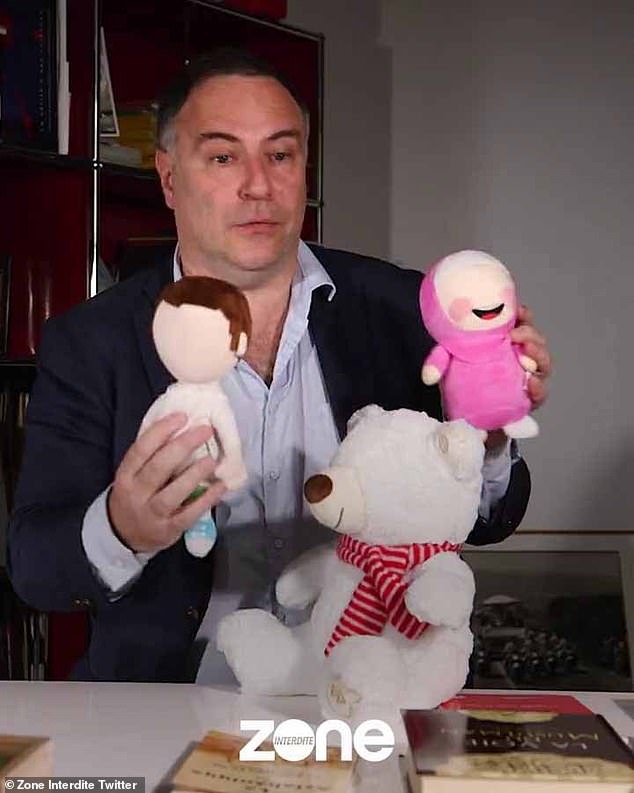 Bernard Rougier, pictured, professor of Arab civilization and society at Sorbonne Paris III University, a specialist in radical Islam, says that the faceless dolls and teddy-bears are an introduction of an ideological principle into the world of childhood

A Muslim lawyer from Roubaix, Amine Elbahi, who spoke out about radical Islam in the programme, has also been placed under police protection after saying he was threatened with decapitation.

He has told French news channel BMFTV that his phone number circulated on social media, and ‘several murder calls were broadcast’. 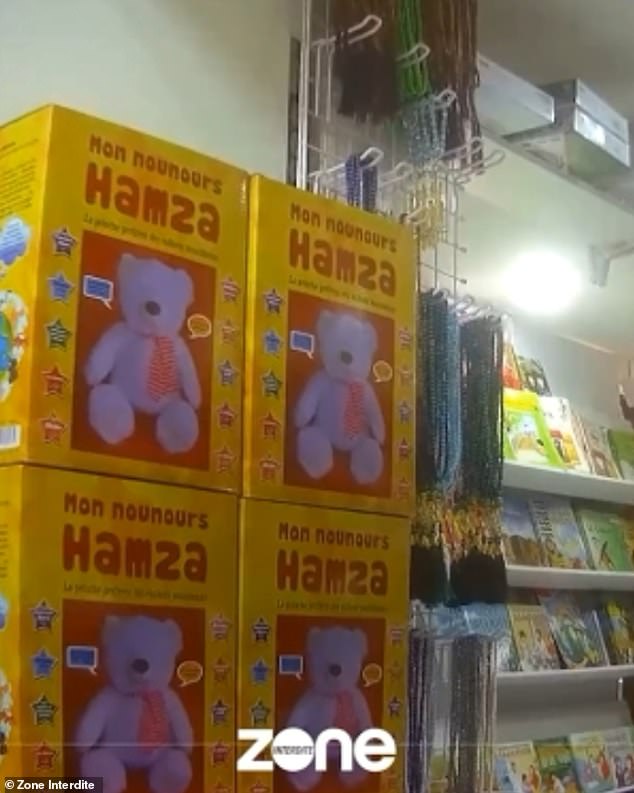 The toy stores in Roubaix also had ‘Hamza teddy bears’ on offer, which did not have any facial features, amongst other toys which follow the Islamic ruling which forbids the depiction of facial features of any kind

‘I am threatened with beheading, slitting, attacking me because I held a speech of truth with my face uncovered, and in particular on the inaction of the mayor of my commune’, he said.

‘What I said upset people. Given the threats I am receiving my aim must have been right.’ 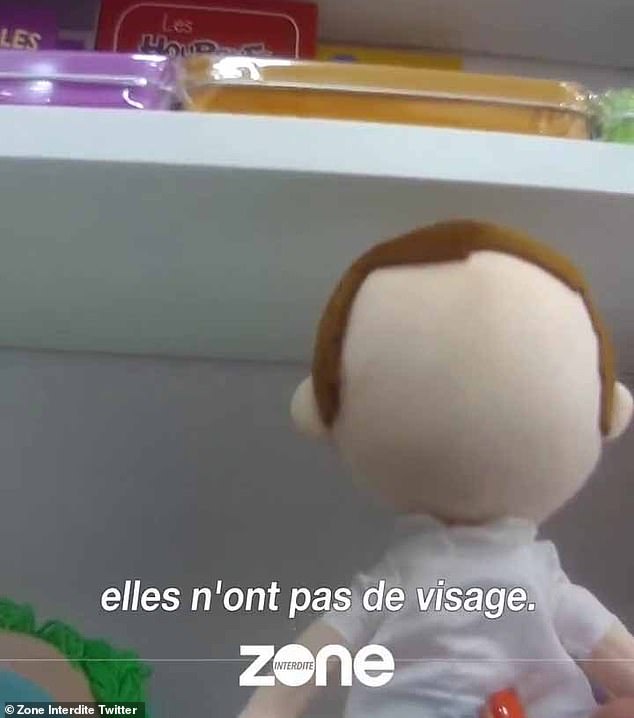 Another faceless doll in the clip from the French documentary airing tonight, which is presented by Ophélie Meunier, who is now under police protection

In the threatening messages, he is described as ‘Kafir’, which translates to ‘nonbeliever’ or ‘infidel’ in Arabic.

‘Kafir’ has been a word used by supporters of ISIS, al-Qaeda, and other Islamic extremist groups, to refer to ‘Muslim and non-Muslim adversaries’ through ‘various propaganda materials’, according to the Counter Extremism Project.

Lawyer Jean Tamalet told AFP: ‘He is told that he is going to be beheaded and slaughtered. We won’t let a single threat pass.

‘We will file a complaint against anyone threatening this gentleman.’

Three members of the charity association, which received the council payout of €64,640, accused by prosecutors as being used for offering Islamic education, are to appear in court alongside the mayor of Roubaix on Wednesday. 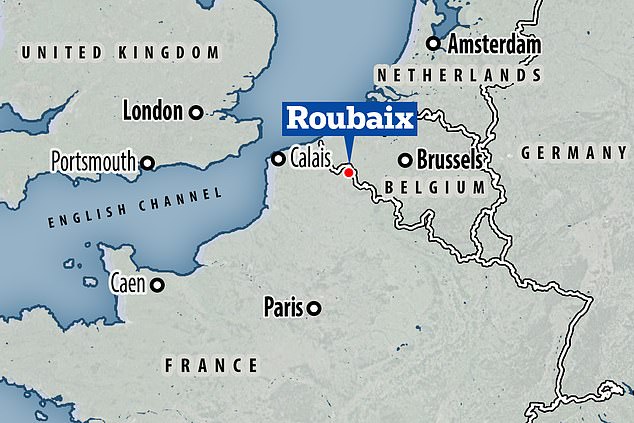 French legislation states that public bodies are prohibited from contributing to religious charities, a law which is designed to uphold the secular values and views of the state.

Mayor Guillaume Delbar, 50, is facing charges of breaking this law ‘by negligence’ when he gave the go-ahead for the association to receive funding, but he says he may have been tricked.

The three charity members are accused of breach of trust – which they deny. They say the association never offered religious lessons.

Muriel Cuardrado, a lawyer for one of the members of the charity, said that the association had previously helped children from disadvantaged backgrounds to get the baccalauréat, the French national academic qualification pupils can get at the end of secondary school.

‘When I read in the press that this is a proselytising association, it gives me stomach cramps,’ she said.

Mayor Delbar said he decided to get behind the association because it ‘developed a formidable programme of help for the educational success of Roubaix’s children’.

He continued: ‘I might have been tricked. I might have made a mistake. But the debate must not be manipulated by those who see separatists everywhere.’

Separatists is a term used by President Macron to condemn Muslims who he says are ‘dividing the nation’ by living in their own communities with their own rules and customs.