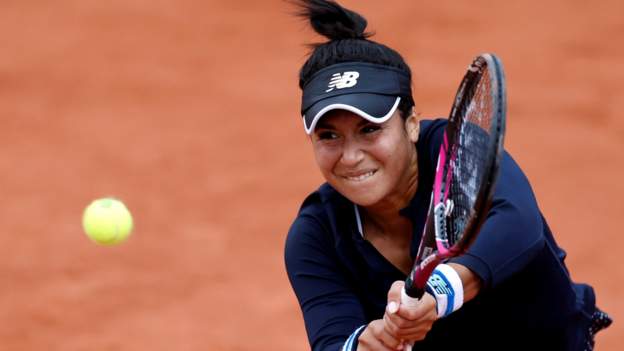 Heather Watson was unable to prolong British interest in the French Open singles after losing her first-round match to France’s Fiona Ferro.

Watson, 28, was the final Briton in the draws after five of her compatriots were beaten on the opening two days.

Watson’s defeat means she has not won a match since the professional game returned in early August.

The Guernsey player competed at a decent level against the in-form Ferro, but their contrasting form coming into the Grand Slam event in Paris appeared to prove decisive.

Ferro, 23, has climbed into the world’s top 50 for the first time on the back of winning a clay-court title at the Palermo Open last month.

That added confidence is what seemed to give her the upper hand in a pivotal first-set tie-break from which Watson could not recover.

The pair continued to be evenly matched in the second set, but again it was Ferro who edged the crucial moments.

Trailing 2-0, she broke back in the third game and then in the seventh to claim her first main-draw win at her home Grand Slam.

Watson’s defeat means it is the first time since the French Open in 2013 that there are no British representatives in the second round of a Grand Slam.

Couple are accused of drug to murder world champion dancer

Mum, 23, who had three appointments cancelled due to Covid is told over ZOOM she has cancer