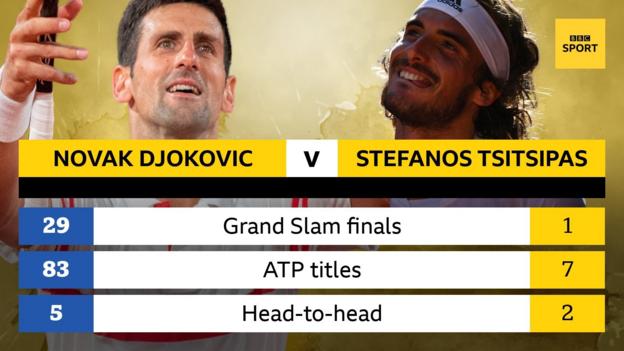 Novak Djokovic says he has no concerns about recovering from his classic semi-final against Rafael Nadal in time for the French Open final against Greek fifth seed Stefanos Tsitsipas.

The Serbian top seed meets Tsitsipas, who is playing in his first Grand Slam final, at 14:00 BST on Sunday.

“I have a day and a half to rejuvenate and try to regroup. My recovery abilities are pretty good,” he said.

Tsitsipas, 22, is the first Greek player to contest a major final.

“It’s time for me to go for my chances,” said Tsitsipas, who has lost five of his seven matches against Djokovic.

“It’s time for me to show that I’m capable of playing Novak.”

The Roland Garros showpiece is a rematch of last year’s semi-final when Djokovic withstood a gutsy fightback from Tsitsipas before winning 6-3 6-2 5-7 4-6 6-1.

While Tsitsipas is entering new territory, Djokovic is bidding for a 19th Grand Slam title to move one behind the all-time men’s record shared by Nadal and Roger Federer.

The Serb won his only Roland Garros title in 2016 and another would make the first man in the Open era to win all four majors twice.

The victory came in a semi-final that will be long remembered and ranked among the all-time great matches on the Paris clay.

The Serb described the four-set win as “one of the top three matches” in his career. It was only the third defeat for Nadal in 108 matches at Roland Garros.

Djokovic beat the Spaniard in the 2015 quarter-finals and became the first player to record two wins over Nadal there.

Sweden’s Robin Soderling was the other player to beat Nadal when he stunned him in the 2009 fourth round. Both Djokovic and Soderling ended up losing in the finals of those tournaments.

“It’s not the first time that I play an epic semi-final in a Grand Slam and then I have to come back in less than 48 hours and play finals,” Djokovic said.

“Obviously, my physiotherapist will try to do everything possible so I can be fresh.

“Because I played enough tennis, I don’t need to train too much. It’s really now just about taking things slowly until the day of the final.”

Once the men’s singles draw pitted third seed Nadal in the same half as Djokovic, many predicted this would be Tsitsipas’ best chance so far to reach a major final.

The Greek is the leading player on the ATP Tour in 2021 and is most comfortable on clay, winning more matches on the surface than any other man this year.

Nevertheless, he still had to overcome second seed Daniil Medvedev in the quarter-finals – even though the Russian had never previously excelled on the red dirt – and then German sixth seed Alexander Zverev in the last four.

Like Djokovic, he too faced an intense battle. Tsitsipas led by two sets before Zverev levelled, but he overcame the wobble to win the decider and earn a first shot at a major title.

Already he has won the ATP Finals and lifted his first Masters title in Monte Carlo last month, but it is Roland Garros where he has always wanted to be successful.

“I came from a really small place outside Athens – my dream was to play on the big stage of the French Open one day. I would have never thought that I would,” he said.

“I’m proud of myself. I actually love what I’m doing. I love that I get to play in this stadium.

“I’m grateful for every single match that I get to play.

“I’m obviously just blessed to have the opportunity to play against the best and test myself, something that I’ve always dreamed and wished to happen one day.”

US Secretary of State: Saudi Arabia is an important security partner, but we will raise the issue of human rights