The hat-trick. It is football’s most notable individual on-field achievement. A rarity honoured by the awarding of the match ball to those who manage it.

But such is the crazy, goal-packed nature of the 2020-21 season that even the remarkable feat of scoring three in a game is threatening to become routine.

Patrick Bamford’s treble at Aston Villa on Friday was the sixth scored in the first 49 Premier League games of this campaign – the earliest such a tally has been reached in the competition’s history.

In honour of this, BBC Sport takes a look back through the hat-tricks of the last 28-and-a-bit seasons of the English top flight.

And we have a quiz that will seriously test your knowledge of the players to have scored three or more in a Premier League game.

Bamford’s hat-trick at Villa was the 342nd scored in the Premier League. He became the 179th player to do so.

In a neat bit of bookending, the first was also bagged by a Leeds striker, with Eric Cantona netting three times in a 5-0 win over Tottenham on 25 August 1992.

In addition, this came during of a run of six goals in six games at the start of that season for the Frenchman – something matched this campaign by Bamford.

Cantona’s hat-trick was one of 14 scored in the Premier League’s maiden season, with many of the others having Leeds connections.

Gordon Strachan and Rod Wallace also scored trebles for the Whites (the former against Blackburn, the latter at Coventry), their former striker John Hendrie bagged one for Middlesbrough (also against Blackburn), future Leeds player Brian Deane notched a treble for Sheffield United against Ipswich, while Teddy Sheringham and Chris Sutton scored hat-tricks against them (for Tottenham and Norwich respectively).

Remarkably, Les Ferdinand netted two league hat-tricks in the space of three days in 1992-93, in a 4-3 home win over Nottingham Forest on 10 April and then a 5-3 victory at Everton on the 12th.

The following season would see 19 hat-tricks scored as the likes of Alan Shearer, Andrew Cole, Robbie Fowler and Ian Wright came to the party. This tally remains a joint record for a Premier League campaign, along with 2011-12, when the likes of Wayne Rooney and Robin van Persie were in their pomp. 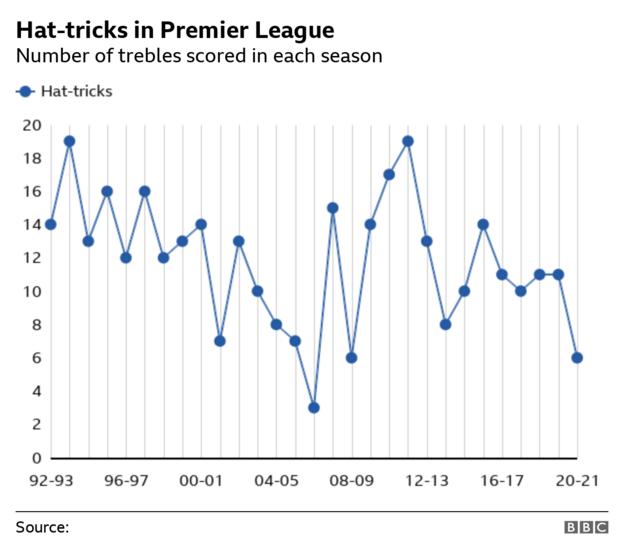 Manchester City’s Sergio Aguero has the most Premier League hat-tricks, with 12 to his name – the first coming in a 3-0 win over Wigan on 10 September 2011 and the most recent in last January’s 6-1 victory at Aston Villa.

This includes the two he scored in eight days in February 2019 – in victories over Arsenal and Chelsea that helped City win their most recent title.

The Argentine is currently one ahead of the division’s all-time leading goalscorer Alan Shearer, formerly of Blackburn and Newcastle. 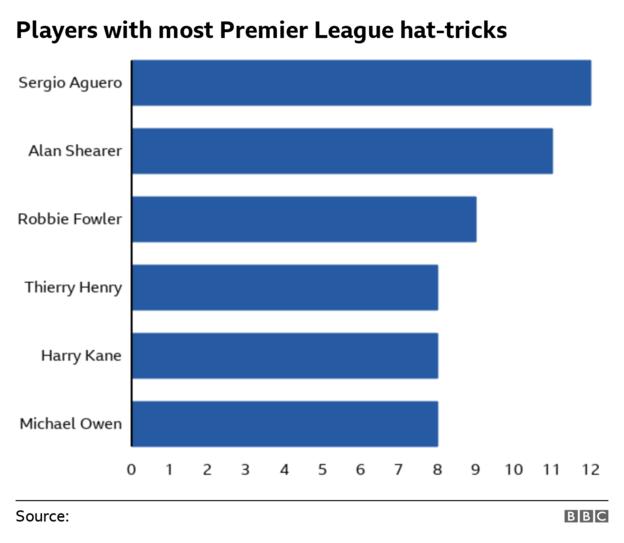 Liverpool top the list of clubs with the most Premier League hat-tricks with 40. That includes Robbie Fowler’s famous four-minute-and-33-second treble against Arsenal in 1994, Steven Gerrard’s one-man show against Everton in 2012 and the three Luis Suarez scored against Norwich.

Arsenal are second with 39, which also contains plenty of memorable ones – Dennis Bergkamp’s brilliance at Leicester in 1997, Nwankwo Kanu at Chelsea, and Thierry Henry and Andrei Arshavin destroying Liverpool. 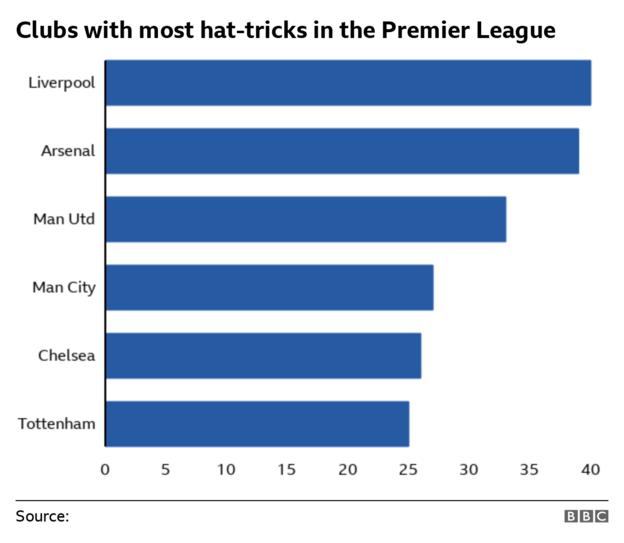 Speaking of Arshavin’s four-goal haul at Anfield, he is one of 21 players to have scored more than three in a game, with five of those – Andy Cole, Alan Shearer, Jermain Defoe, Dimitar Berbatov and Sergio Aguero – netting five in a match.

The real Holy Grail of this arena is the perfect hat-trick – a goal each scored with the right foot, left foot and head.

Mark Robins – for Norwich against Oldham in November 1992 – was the first to score one in the Premier League and there have been 35 since, the latest being Ollie Watkins in Villa’s 7-2 win over Liverpool.

There has also been two hat-tricks of headers (Duncan Ferguson for Everton against Bolton in December 1997 and Salomon Rondon for West Brom against Swansea in December 2016) and two trebles of set-pieces (Southampton’s Matt Le Tissier at Nottingham Forest in August 1995 and Manchester United’s Wayne Rooney at Bolton in September 2011).

Why so many hat-tricks this season?

This season we have witnessed more goals scored per game than in any previous Premier League campaign – 188 in 56 games at an average of 3.36 so far. For comparison, the next highest is 2018-19, which saw 2.82 goals scored per match.

It stands to reason then that the players most tasked with scoring these goals would see their individual tallies rise.

There is an element of educated guesswork as to the reasons. Has defending got worse? Are clubs under-cooked after a shortened pre-season? Is the lack of fickle, judgemental fans in stadiums making players less inhibited?

Another aspect discussed by Mark Chapman and Rob Green on BBC Radio 5 Live on Saturday is that defenders are reluctant to close down as much for fear of being penalised for a foul or handball, either on the pitch or via VAR.

Bamford’s third goal at Villa Park is a case in point – four defenders surrounded him in the box but were seemingly reluctant to make a tackle, allowing the striker to get his shot away.

“I remember Roy Hodgson when he was England manager, during a team meeting with the referees’ association and talking about handballs,” revealed Green.

“He did an impression of a player jockeying with his arms behind his back and it is one of the best things I have seen in a team meeting.

“But his point was that it is so unnatural. This is where we are now – players go to address a player with an immediate disadvantage.”

How many can you remember?

We’ll leave you with that image in your head and a quiz to test your knowledge of Premier League hat-tricks.

It’s simple… all you need do is name all 59 players who have scored more than one Premier League hat-trick.

Can you name every player to have scored more than one Premier League hat-trick?