We are now free to enjoy a holiday in France without the prospect of two weeks’ quarantine on our return.

But where to go to escape crowded beaches and tourist hot spots?

Why not try France’s little-known islands and hideaways, which offer a secluded and relaxing break… 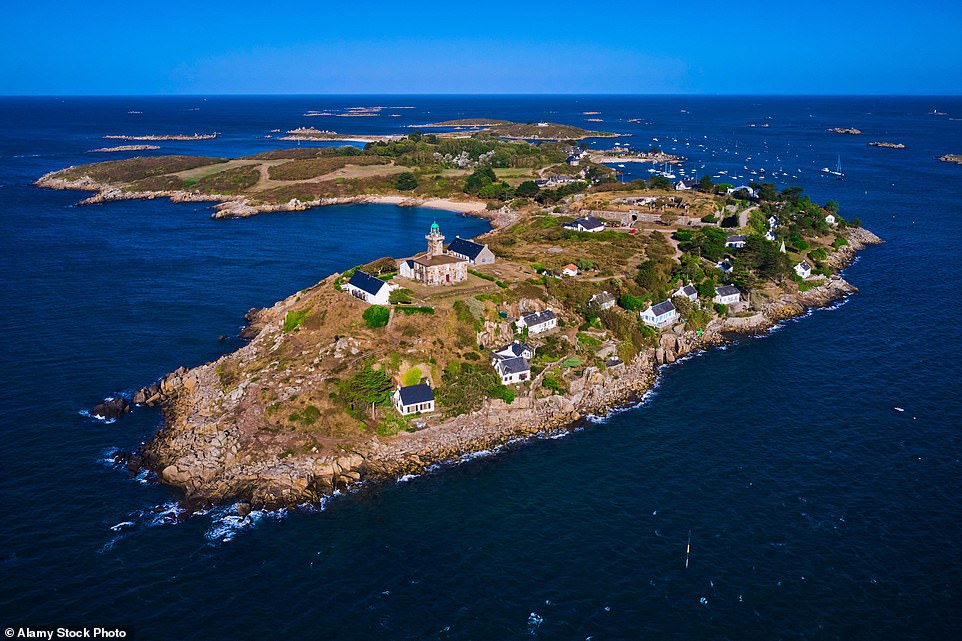 A little slice of heaven: Grande-Ile is less than a mile long but still manages to pack in six sandy beaches, a Napoleonic fort and a fishing village

Secrecy score: Just over 20 miles south of Jersey lie France’s much smaller Channel Islands, the Iles Chausey, off the Bay of Mont Saint-Michel. The largest, Grande-Ile, is less than a mile long, but still manages to pack in six sandy beaches, a Napoleonic fort and a fishing village. Expect the best seafood here – the high tidal range, coupled with fierce currents, results in a smorgasbord of crab, lobster and shellfish. 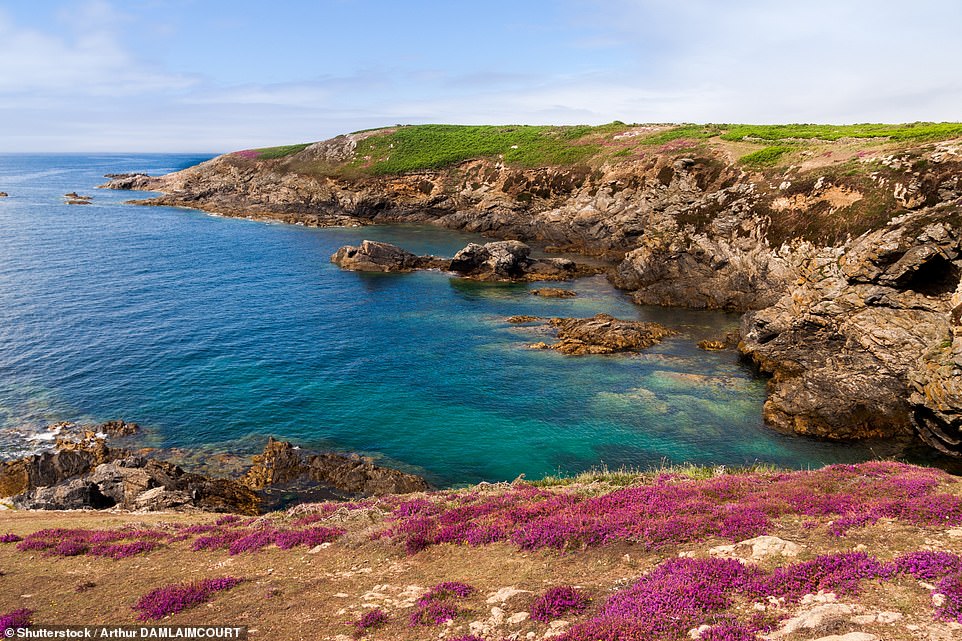 A corker for walkers: Ouessant (pronounced Ushant) is full of wild beaches, eerie rock formations and tales of shipwrecks

Secrecy score: At the most westerly edge of France, windswept Ouessant (pronounced Ushant) is full of wild beaches, eerie rock formations and tales of shipwrecks. Walkers love its 19-mile coastal path, which takes in six lighthouses as well as the island’s extreme west, the dramatic Pointe de Pern, where even the rocks enjoy protected status because of their significance in maritime history. The main village of Lampaul is home to the best beaches as well as a cemetery with the graves of unknown sailors.

Stay: The Hotel de Fromveur is close to the water’s edge and has 14 simple rooms from €50 to €72 a night for room-only doubles, or from €106 to €130 for half board (hotel-fromveur.fr). The (often choppy) ferry from Brest takes two-and-a-half hours, or 40 minutes from Conquet (pennarbed.fr). 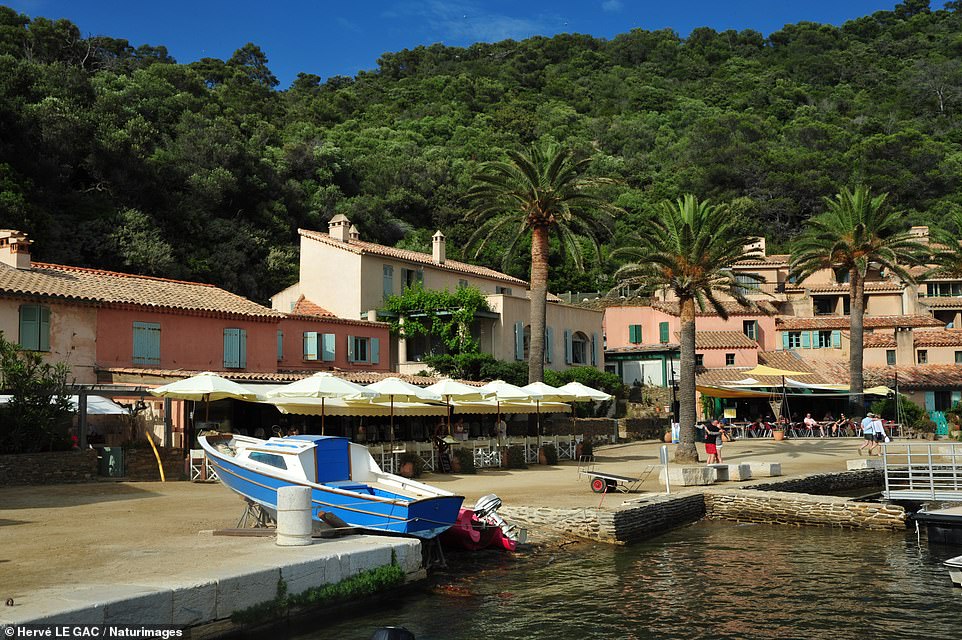 You can follow 21 miles of signposted paths through forests and round rugged coasts, or snorkel round the underwater nature trail in protected waters in Port-Cros

Secrecy score: Leave the crowds behind on the Cote d’Azur and head to the Iles d’Hyeres, between Marseilles and St Tropez. While yachties and day-trippers prefer the larger Porquerolles, car-free and bike-free Port-Cros offers a wilder slice of Provence. You can follow 21 miles of signposted paths through forests and round rugged coasts, or snorkel round the underwater nature trail in protected waters. 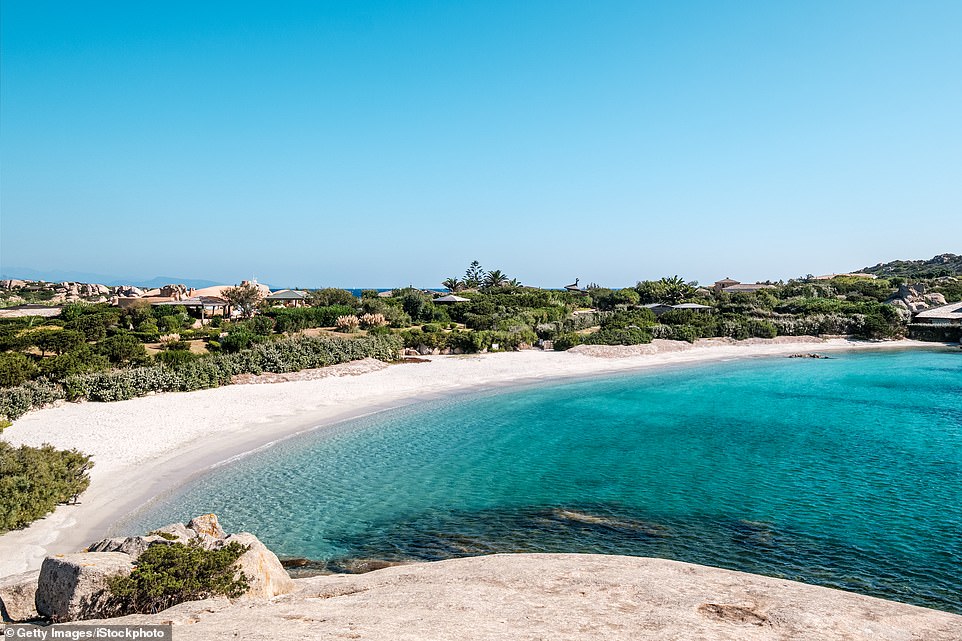 Cavallo, pictured, is part of the Lavezzi archipelago. The Hotel & Spa des Pecheurs, which is bang on the water’s edge, is highly recommended

Secrecy score: Cavallo, the Med’s answer to Mustique, is seriously exclusive – boats aren’t allowed to moor in its coves, transport is by golf buggy, and there are a number of swish villas. Part of the Lavezzi archipelago, Cavallo has giant boulders on its sandy beaches.

Stay: Bang on the water’s edge, The Hotel & Spa des Pecheurs has 50 rooms built from local stone. There are tennis courts, and snorkelling and diving excursions can be arranged. Just Corsica has a week’s B&B in September from £1,040pp, not including transport (justcorsica.co.uk). Fly to Figari and take a 25-minute taxi to Piantarella, from where the 15-minute ferry departs (isoladicavallo.com). 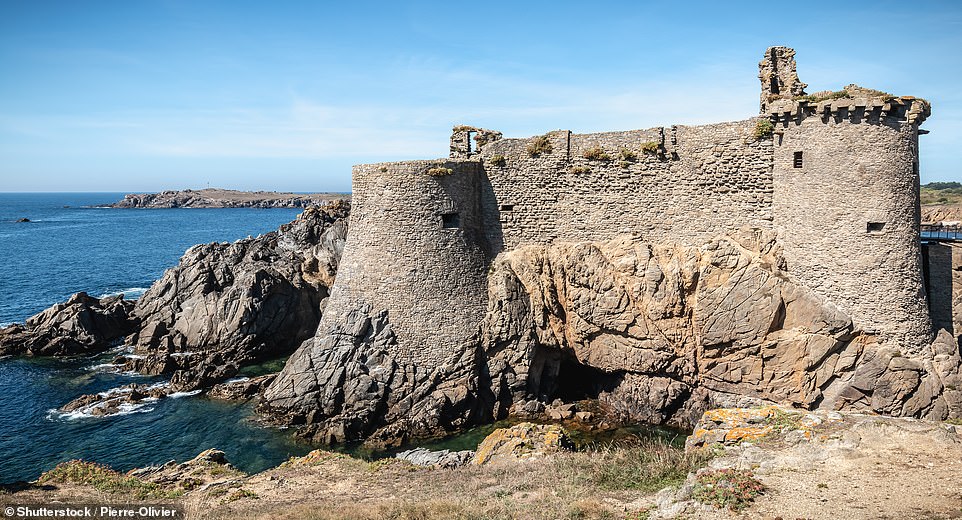 Secrecy score: Although just a 30-minute boat trip from the mainland near Nantes, it’s another world on this island, with prehistoric sites and a foreboding castle on a rocky spur that dates back to the Hundred Years’ War. Hike or bike the 28-mile coastline, which takes in sand dunes and beaches on the calmer east coast, and rugged granite cliffs with inlets on the Atlantic side. There is plenty of seafood to feast on in this former leading tuna port, which now lands everything from monkfish to sole.

Stay: Best of a clutch of B&Bs is Les Villas du Port in Joinville, the main town. The B&B comes with a hot tub and comfortable rooms from €90 a night (lesvillasduport.fr or yeu-island.com). Take the ferry from Port Fromentine (yeu-continent.fr). 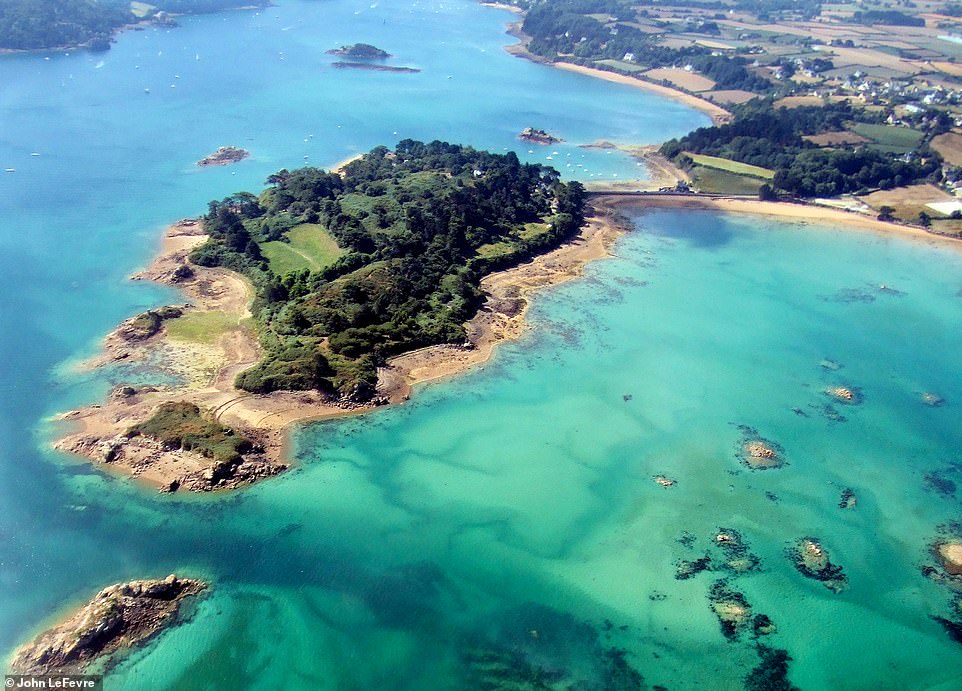 L’Île à Bois is a 37-acre private island off Paimpol on the north coast, which can be all yours

Secrecy score: Brittany’s coast is liberally kissed with islands that are visited by tourists on regular ferry services. For something more exclusive, this 37-acre private island off Paimpol on the north coast can be all yours. Fringed by sandy beaches and criss-crossed by wooded trails, it’s the perfect place to spend time with the family while fishing, kayaking or swimming in the clear waters. It also has views of the more well-known Ile de Brehat, to which you can take a ferry to see the pretty gardens, lighthouses and the Birlot tidal mill in operation. The island is connected to the coast by a dyke built after the German occupation (ile-a-bois.fr).

Stay: A typical Breton house on the outside, traditionally done out on the inside, Grande Maison sleeps 15 comfortably in six double bedrooms plus a bunk room, with plenty of space for everyone to sit down and eat together. It costs €6,563 for a week in August (revedechateaux.com). 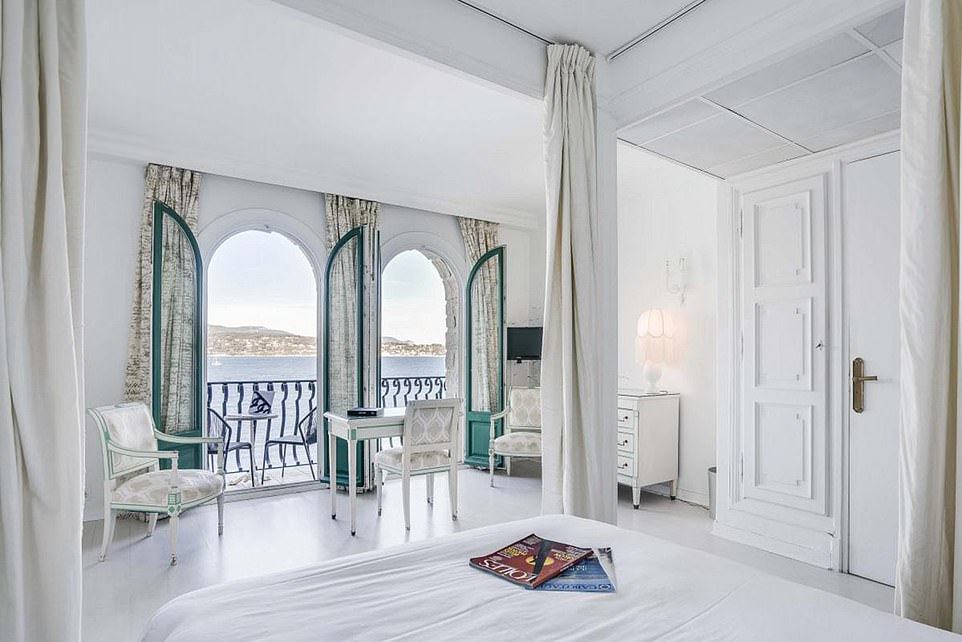 Room with a view: Hotel Delos on Ile de Bendor has rooms with sea views, a colourful bar and an outdoor pool

Secrecy score: One of two Iles Paul Ricard off the coast near Toulon, Bendor was bought by the pastis king in the 1950s and developed as a private getaway for him and his jetset friends. Now open to the public, the rocky island with a small village is home to a collection of rare old wine and pastis bottles as well as vintage cocktail books.

Stay: Some of the light, unfussy rooms at Hotel Delos have lovely sea views. There is also a colourful bar and an outdoor pool (lesilespaulricard.com). B&B doubles cost from €215, with a minimum two-night booking. The price includes the ten-minute ferry from Bandol. 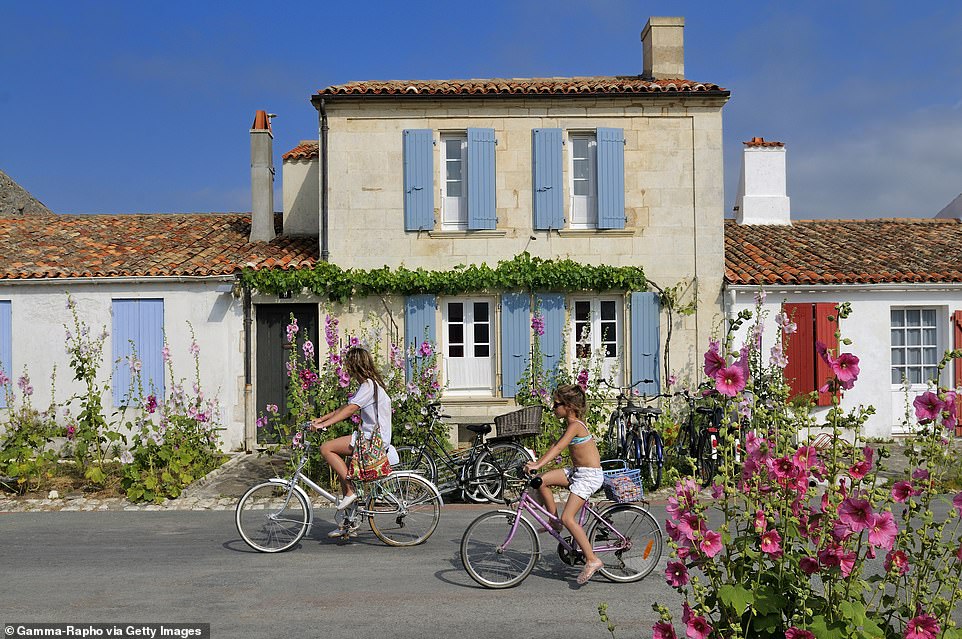 Ile d’Aix is a laid-back coastal idyll of just 250 inhabitants. It’s so bijou that you can easily stroll around it in three hours

Secrecy score: While Britons have been flocking to the Ile de Re further north, in-the-know Parisians have been heading instead to this laid-back coastal idyll of just 250 inhabitants.

It’s so bijou that you can easily stroll around Aix in three hours. There are bays for swimming, oysters to eat and Napoleonic history to check out: an important battle during the wars took place offshore, the emperor stayed here before he was exiled to the island of St Helena, and there is also a Napoleonic museum.

Stay: Where else but the Hotel Napoleon, with its bistro, Chez Josephine, and 18 modern rooms, some with sea views. Doubles cost from €120 a night in August (hotel-ile-aix.com). The ferry from Fouras takes 20 minutes (service-maritime-iledaix.com). 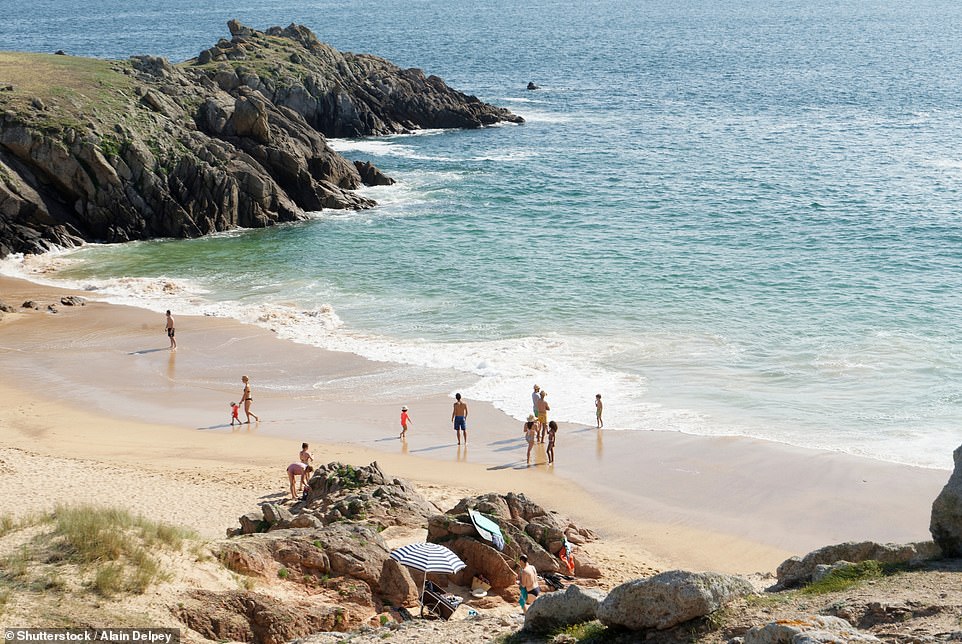 Along with blue-shuttered houses, colourful fishing boats and walks through moorlands and dunes, Houat is also home to an unusual site – a museum that explores the world of the microscopic organisms phytoplankton

Secrecy score: North-east of Brittany’s largest island, Belle-Ile, lies the less-well known and traffic-free Houat, which is just three miles long. One of its beaches, Treac’h er Goured, is almost half the length of the island.

Along with blue-shuttered houses, colourful fishing boats and walks through moorlands and dunes, Houat is also home to an unusual site – a museum that explores the world of the microscopic organisms phytoplankton.

Stay: La Boite a Poissons, which is open until September 20, has bell tents with Japanese beds and duvets – stays cost from €64 a night for two (laboiteapoissons.fr). Ferries from Quiberon take 45 minutes (compagnieoceane.fr). 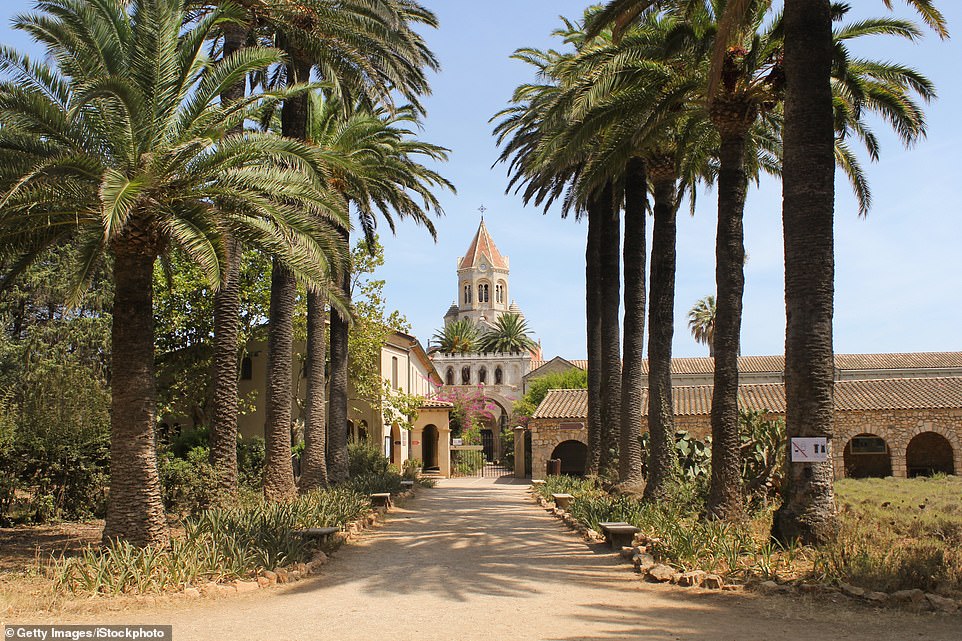 Ile Saint-Honorat, a short ferry ride from Cannes, is known for its own version of limoncello liqueur – Lerincello

Secrecy score: A short ferry ride from Cannes, this member of the Lerins islands boasts not just beaches and walks but also its own version of limoncello liqueur – Lerincello. It is made with lemons by the abbey monks who have lived on the small island since the 5th Century. You can take a tour of the abbey.

Stay: It’s not possible to stay on Saint-Honorat, but it’s only a 15-minute ferry ride from Cannes (cannesilesdelerins.com), where Villa Garbo has 12 elegant serviced apartments from €247 a night (villagarbocannes.com). 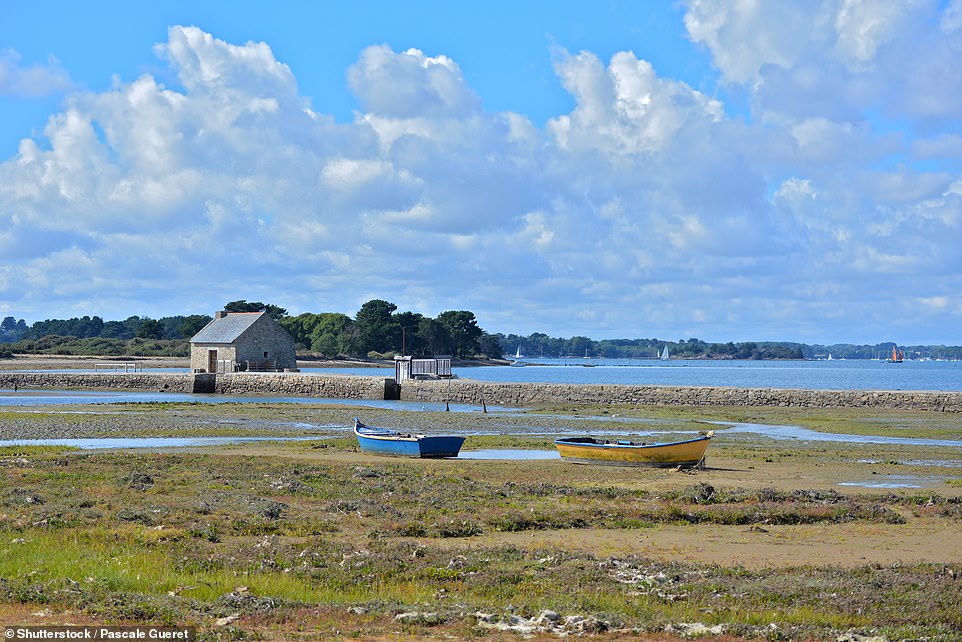 Ile-d’Arz is rugged and windswept, with fishermen’s cottages and a coastal path for cycling or hiking

Secrecy score: There are 42 islands in the Gulf of Morbihan, with the largest, the Ile aux Moines, attracting by far the most tourists. Arz is more rugged and windswept, with fishermen’s cottages and a coastal path for cycling or hiking. They call it the Captains’ Island after the time when most of the residents joined the navy – a museum tells the tale. Today’s would-be captains can get on the water at the sailing school. At the Pointe du Berno headland, a 16th Century tidal mill has been restored to working order.

Stay: L’Escale en Arz has a seafood restaurant and simple, room-only doubles from €83 a night in August (restaurant-escale.com). The ferry from Vannes takes 25 minutes (ile-arz.fr).

Lionel Messi’s 700 goals: The stats, the best five and most important five for Barcelona star

Man, 26, is charged with murdering pensioner, 74

An AWS Ground Station satellite antenna at one of the company's data center in Boardman, Oregon.AmazonMicrosoft will...