Although they’re best known for buzzing round in circles searching for bananas, scientists reveal fruit flies actually have a highly impressive range.

The species, Drosophila melanogaster, can fly up to nine miles (15 km) in a single journey, the researchers from California Institute of Technology (Caltech) reveal.

Impressively, this is around 6 million times their average body length, which is just 2.5 millimetres, or one tenth of an inch.

This would be like the average human covering just over 6,200 miles (10,000 kilometres) in a single journey – roughly the distance from the North Pole to the equator.

Caltech experts conducted experiments in a dry lakebed in California’s Mojave Desert by releasing thousands of the flies and luring them into traps containing fermenting juice in order to determine their speeds. 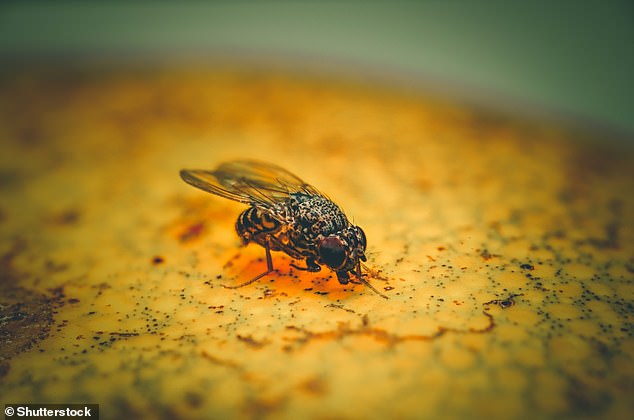 Drosophila melanogaster is a small, common fly found near unripe and rotted fruit. It has been in use for over a century to study genetics and behavior

‘The dispersal capability of these little fruit flies has been vastly underestimated,’ said study author Michael Dickinson, a biologist at Caltech.

‘They can travel as far or farther than most migratory birds in a single flight.

‘These flies are the standard laboratory model organism, but they are almost never studied outside of the laboratory and so we had little idea what their flight capabilities were.’

The team wanted to solve a paradox – genetically similar fruit flies had been found in the wild separated by thousands of kilometres, and yet when released outdoors, they would buzz around in circles over short distances, like in our kitchens.

The paradox was identified in the 1940s by Ukrainian-born geneticist Theodosius Dobzhansky, known for his 1937 book Genetics and the Origin of Species.

One possible explanation was that the flies behaved differently when out in the wild while in search of food.

Led by former postdoctoral scholar Kate Leitch, the team made several trips to Coyote Lake, a dry lakebed 140 miles from Caltech in the Mojave Desert, with hundreds of thousands of the flies in containers.

The aim was to release the flies, lure them into traps at set locations and measure how long it took the insects to fly there. 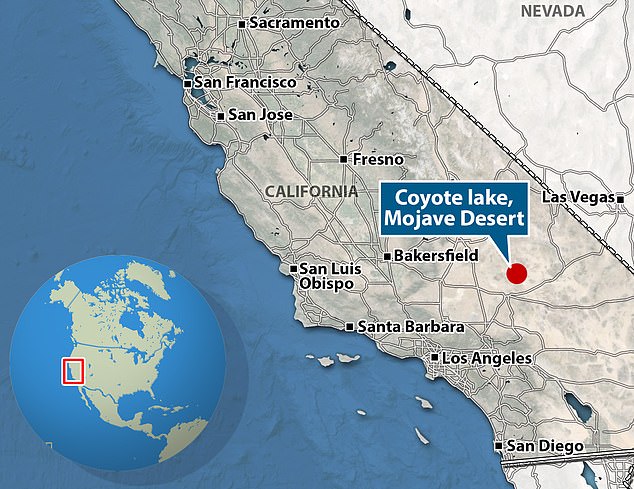 Coyote Lake is a dry lakebed 140 miles from Caltech in the Mojave Desert, California, the US

To do this, the team set up 10 ‘odour traps’ in a circular ring, each located along a one-kilometre (0.6 mile) radius around the release site.

Each trap contained a tantalising cocktail of fermenting apple juice and champagne yeast – a combination that produces carbon dioxide and ethanol, which are irresistible to a fruit fly.

The species has built up a tolerance for alcohol through living in and feeding on rotting and fermented fruit.

The traps also each had a camera, and were constructed with one-way valves so that the flies could crawl into the trap toward the cocktail but not back out.

In addition, the researchers set up a weather station to measure the wind speed and direction at the release site throughout each experiment. This would indicate how the flies’ flight was affected by the wind.

The flies released by the team had been originally collected at a fruit stand and then were raised in the lab, but they were not genetically modified in any way. 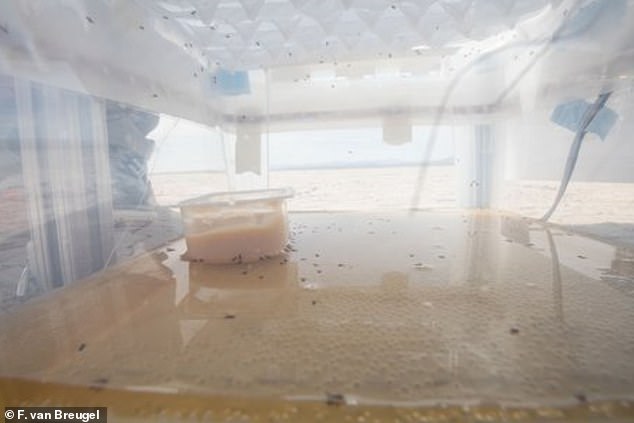 At the capture site, flies were lured by a cocktail of fermenting apple juice. Measuring the time it takes for the flies to travel from the release site to these traps enables researchers to estimate how fast and far a fruit fly can travel 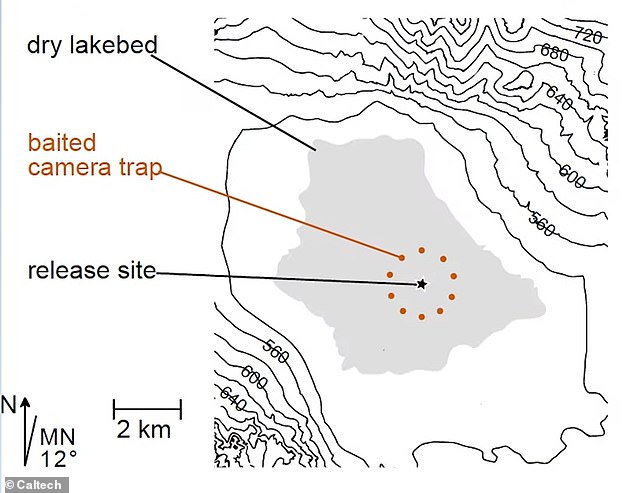 Map of the researchers’ set-up. The team set up 10 ‘odour traps’ in a circular ring, each located along a one-kilometre (0.6 mile) radius around the release site

The team drove the buckets of flies to the centre of the circle of traps. The buckets contained plenty of sugar, so that the insects would be fully energised for their flight.

However, they contained no protein, giving the flies a strong drive to search for protein-rich food.

The team estimated that the flies would not be able to smell the traps from the centre of the ring, forcing them to disperse and search.

At a precise time, a team member at the centre of the circle opened up the buckets simultaneously and quickly released the flies. The team repeated these experiments under various wind conditions.

It took about 16 minutes for the first fruit flies to cover the one kilometre to reach the traps, corresponding to a speed of approximately one metre per second.

The team interpreted this speed as a lower limit, as perhaps these first flies had buzzed around in circles a bit after release or did not fly in a perfectly straight line.

Previous studies from the lab showed that a fully fed fruit fly has the energy to fly continuously for up to three hours.

From this, the team concluded D. melanogaster can fly roughly 12 to 15 kilometres (7.4 to 9.3 miles) in a single flight, even into a gentle breeze, and will go further if aided by a tailwind. 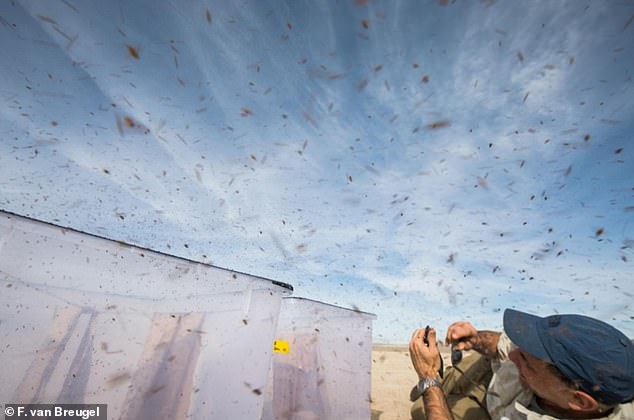 In 2018, the Dickinson laboratory discovered that fruit flies use the sun to fly in a straight line in the search for food.

Flying aimlessly in circles could be deadly, so there is an evolutionary benefit to being able to navigate efficiently.

The team think each fruit fly chooses a direction at random, uses the sun to fly straight in that direction and carefully regulates its forward speed while allowing itself to be blown sideways by the wind.

This enables it to cover as much distance as possible and increases the probability that it will encounter a plume of odour from a food source.

‘For any animal, if you find yourself in the middle of nowhere and there’s no food, what do you do?,’ said Dickinson.

‘Do you just hop around and hope you find some fruit? Or do you say, “Okay, I’m going to pick a direction and go as far as I can in that direction and hope for the best”.

‘These experiments suggest that that’s what the flies do.’

The study has been published in the journal Proceedings of the National Academy of Sciences.

The fruit fly (Drosophila melanogaster) is a small, common fly found near ripe and rotten fruit.

It has been in use for over a century to study genetics and behaviour.

The species has also built up a tolerance for alcohol through living in and feeding on rotting and fermented fruit.

In 2012, researchers from Emory University in Atlanta, Georgia said fruit flies actively seek out food containing ethanol to kill off parasitic wasps in their blood stream.

Thanks to a diet of fermented fruit, the flies are used to alcohol and it has little effect on them. But it is deadly for the wasps.

‘Even after being infected, fruit fly consumption of alcohol leads to death of the wasps growing within them.

‘Surprisingly, fly larvae actively seek out ethanol-containing food when infected, showing they use alcohol as an anti-wasp medicine.’

While the flies initially prefer food with a sweet flavour, they quickly learn to opt for less sweet food sources that offer more calories and nutritional value, according to another team at the University of British Columbia.

The researchers allowed fruit flies (Drosophila melanogaster) to choose between sources of liquid sugar that varied in their ratios of sweetness to caloric value.

In some instances it took the populations of flies as little as four hours to shift their preference towards more nutritious food sources – typically based on sugars like sucrose, maltose and D-glucose.

Researchers also isolated several molecular pathways in a strain of flies that appear to affect taste and feeding preference and found that blocking insulin signaling increased preference for nutritious sugars.