Furious boxing fans have accused Floyd Mayweather of throwing his fight with Logan Paul after footage of the legendary boxer appearing to hold up his opponent – rather than letting him slump to the canvas – emerged.

Mayweather dominated the contest at the Hard Rock Stadium in Miami but was surprisingly unable to stop Paul, with the rookie surviving the full eight rounds of their exhibition bout.

But fight fans have now hit out at Mayweather, claiming the undefeated 44-year-old deliberately stopped Paul from collapsing in order to extend the fight – despite landing a flurry of punches which looked to have ended the YouTuber’s challenge.

The clip during the fight shows an exhausted Paul stepping back towards the ropes, before the social media sensation looked to thrust out a heavy right hand.

Mayweather was able to evade the hook with ease and responded with a blow of his own, crashing into Paul’s head. The 26-year-old then slumped forward towards ‘Money’, who promptly unleashed an uppercut.

The odds were firmly stacked against Paul coming into the clash, and the evening looked to be over for him after he visibly sagged forward on to Mayweather. 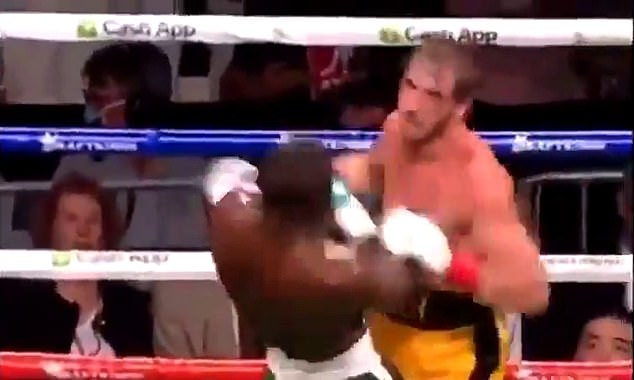 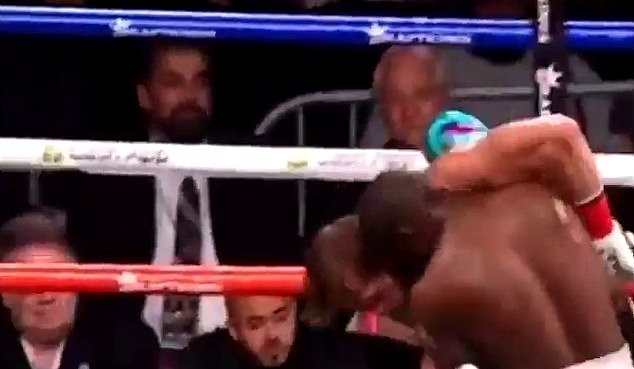 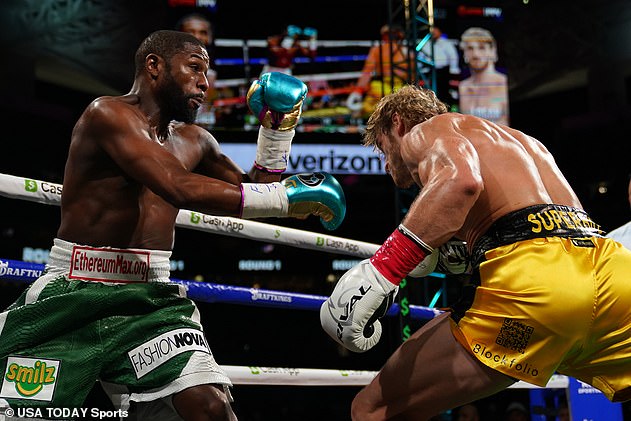 For a second, it looked as though his rival was the only force stopping him from dropping down.

And after the video surfaced on social media in the hours following the bout, a number of spectators were left questioning whether Paul was indeed knocked out.

Paul himself joked that Mayweather may have let him ‘survive’.

After the bout, he said: ‘This is still one of the greatest moments of my life… damn, I’m happy. You never know with this guy, I’m going to go home thinking, “Yo, did Floyd let me survive?”.’

Despite Mayweather being widely mocked for his failure to knock out Paul, a host of fans suggested he allowed Paul to go the full eight rounds because it would be better for Showtime’s TV coverage – and their huge pay packets. 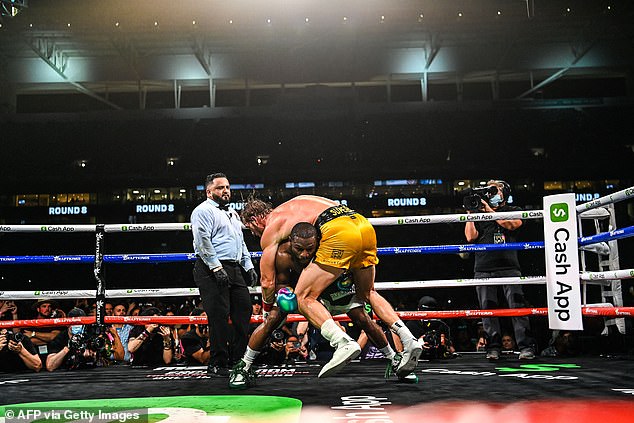 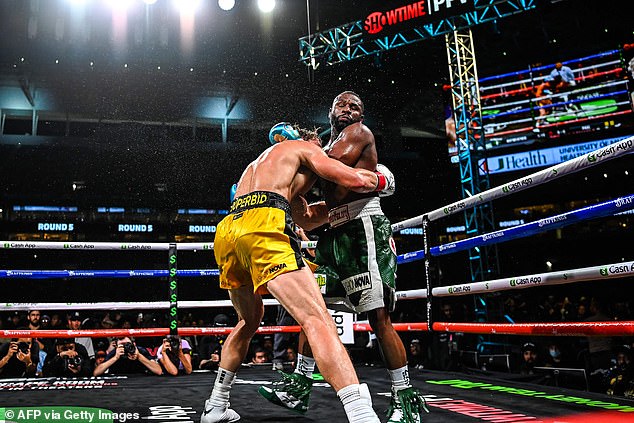 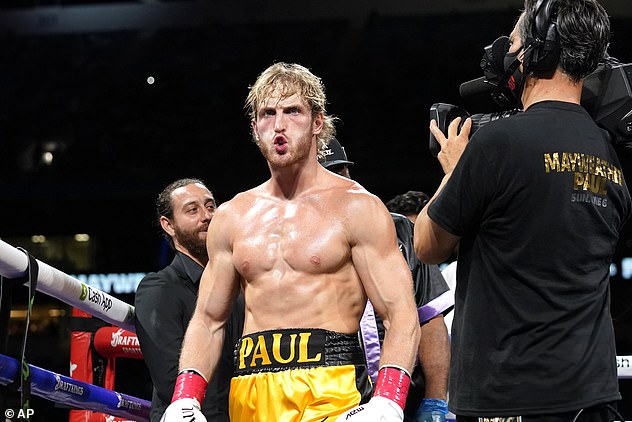 After riding out waves of pressure from Mayweather, Paul joked the rival had let him ‘survive’

There were also claims the boxing legend and Paul could have agreed to go the distance in order to ensure neither man was disgraced in the ring and that both left with their reputations – and earning potential – intact.

Both fighters are certain to have taken home millions from the money-spinning encounter, but the exact amounts are not known.

The official figures are typically made public by the sanctioning commission – and for this fight that would be the Florida State Boxing Commission. However, due to the scrap between them being an exhibition, there are no confirmed fees.

Paul and Mayweather have not revealed what they will bank, either.

One person wrote on Twitter: ‘The whole thing is rigged like WWE. It isn’t sport, it’s the equivalent of a soap opera in America. Embarrassing.’

Another said: ‘It was nothing but a joke and making a mockery of boxing.’

A third referenced Mayweather’s star-studded bout with MMA big name Conor McGregor from 2017, and said: ‘Same as the McGregor fight. They go a certain distance so none of them are disgraced. It’s obvious.’

‘You could tell he was going out cold by his head movement. It looked like he passed out,’ a fourth believes.

The conspiracy theories continued with another fan joking Mayweather kept Paul up to guarantee a hefty windfall for both men after lasting the distance.

A sixth spectator held a similarly withering opinion, posting: ‘No Logan, no. It’s too early to drop. 100 million for eight rounds remember?’ 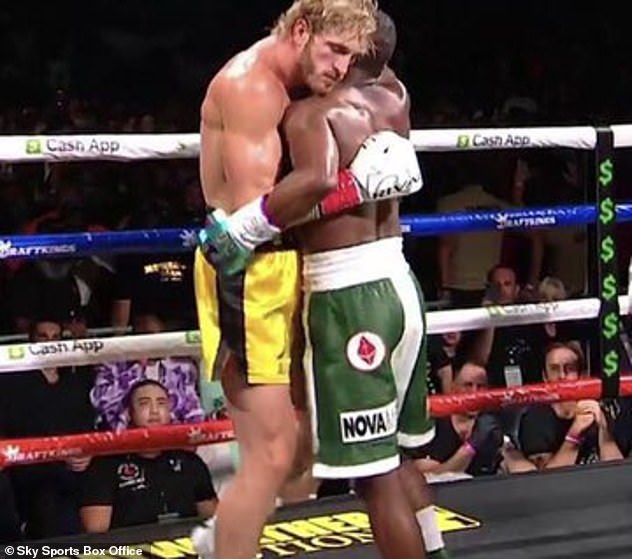 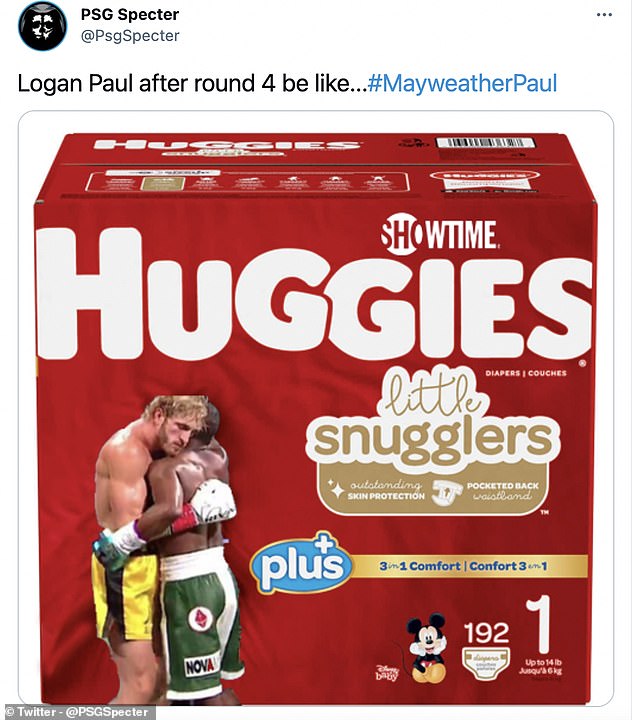 The nature of the fight, which saw Paul regularly clinching with Mayweather, was widely mocked on social media.

Fans were quick to take to Twitter to make light of the bout, with one user writing: ‘Hugging. We paid to watch two men hugging. Not boxing.’

Another person mocked the two fighters up as a husband and wife in a wedding photo, while another popular tweet depicted the duo as Spongebob Squarepants and Patrick.

A box of Nappies was also used to mock the bout, with the pair added on the package clinging onto each other. The words ‘little snugglers’ are beside them. 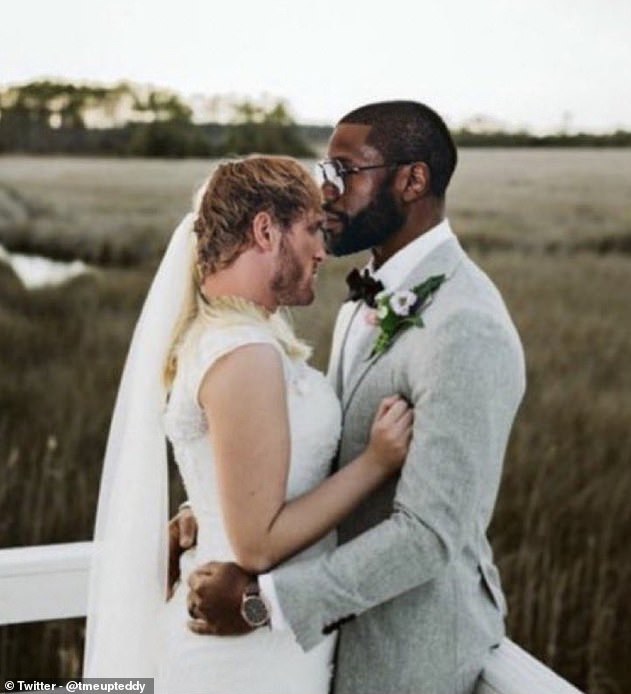 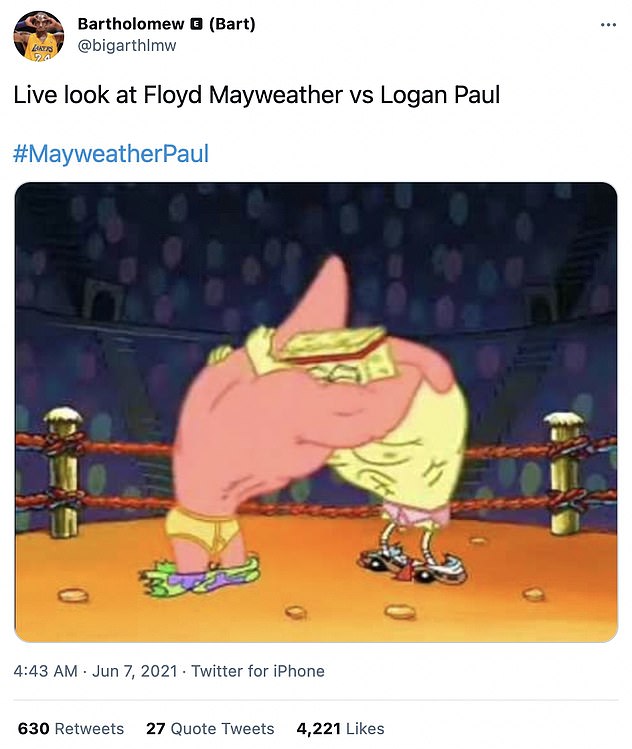 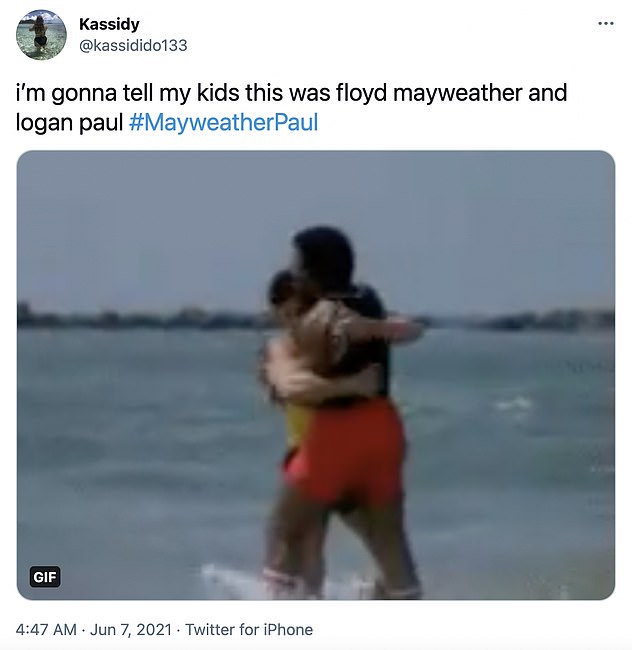 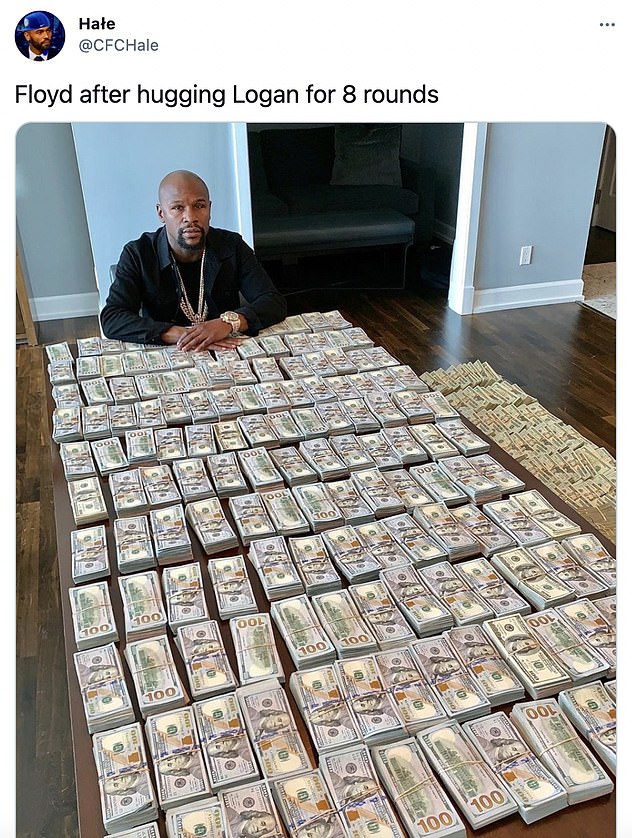 Mayweather and Paul may reportedly lose out on a significant amount of money from the bout, with their pay-per-view earnings at risk of being cut after Showtime’s streaming app crashed.

The fight was aired on the broadcaster’s online platform, but some fight fans in North America aired their frustration after the app crashed, meaning they missed out on the action.

As a result of the outage, the American Television Network have asked fans to go to their website to request a refund. Punters shelled out $49.99 (£35.31) to take in the exhibition and angrily demanded their money back.

It is unclear how many paying customers were affected by the crash, but it could cost Showtime hundreds, if not thousands, if refunds are issued.

The Sun claim this storm may affect what the two fighters receive from their share of the pay-per-view money. Sportsmail has contacted Showtime for comment. 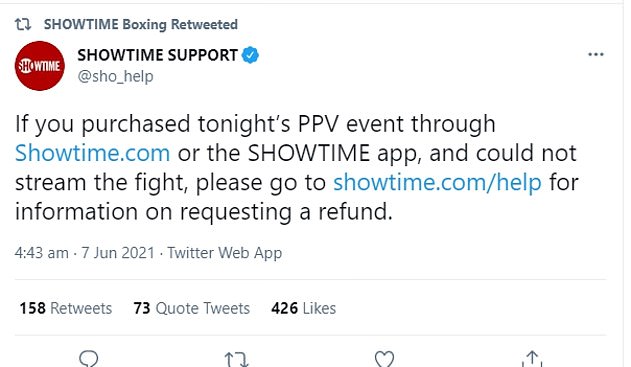 Having admitted his disbelief at the outcome, Paul lavished praise on Mayweather – a stark contrast to the bitter war of words exchanged in the fight’s build-up.

‘He’s one of the GOATs, and in many ways he controls this sport to the tee, that’s what makes him great,’ Paul added. ‘It’s an honour to grace the ring with him.

Mayweather, meanwhile, has admitted he ‘probably won’t do another exhibition’ after being taken the full distance.

He said: ‘I wanted to give people a show and he was fighting to survive, he was the bigger guy but his background was wrestling so he was good at tying me up.

‘Just going the distance was a win for him. He can grapple and was good at holding. When a guy that size is holding you, it’s hard to get him off you. I had fun, he did too. It was cool. 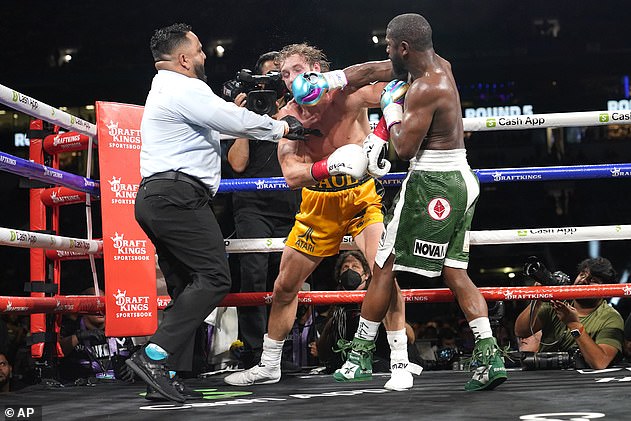 Mayweather is pictured connecting with Paul again, who was able to continue battling away 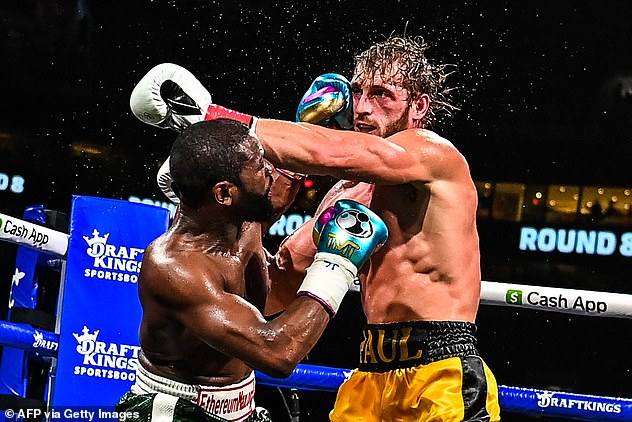 ‘A guy that’s retired, training a few days a week, for me to be retired, be a grandfather and fight a guy in his 20’s. When the money comes, we will see who the winner is.’

Mayweather also admitted Paul was able to put up more of a fight than he had expected, adding: ‘As far as the heavyweights and the big guys, it’s going to be hard, but he’s a tough, rough competitor.

‘It was good action, we had fun. I was surprised by him tonight, good little work. He was better than I thought. 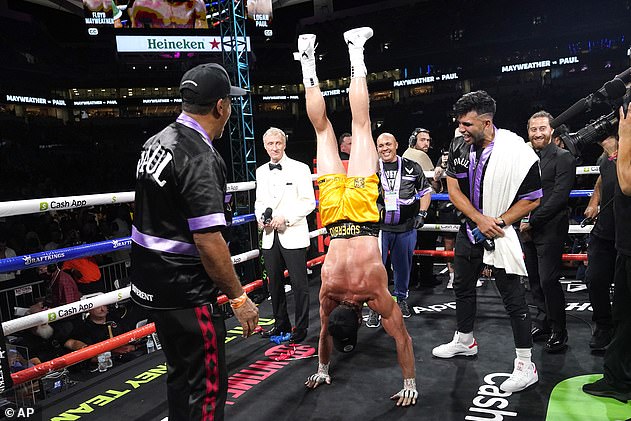 To celebrate the shock outcome, Paul pulled off a handstand in the ring and was in a fine mood 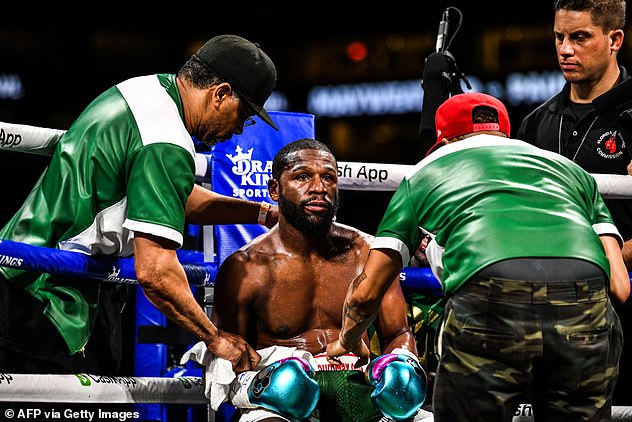