Haven’t you got other things to worry about? MPs hit out at hot pant wearing twerkers who performed at the unveiling of a $2billion ship – as some mistake it for superbowl entertainment

Former soldier turned politician Jacqui Lambie has slammed the Navy over a ‘shocking’ decision to celebrate a new warship with twerking dancers.

But before the formalities commenced, the audience was subjected to a modern dance routine by scantily clad women who performed raunchy moves including twerking.

Senator Lambie trashed the celebration as an ‘absolute shocker’.

‘I thought I was watching the Super Bowl there for a split second, I’ll be honest with you,’ she told Nine’s Today show.

‘Whoever made that call, it’s an absolute shocker for goodness’ sake.’

Senator Lambie added: ‘Good on those young ladies for getting out there, but I tell you, being half clothed outside a warship is probably inappropriate.

‘If that is the leadership in our defence forces, God help our sons and daughters who are serving.’

‘Standards in the ADF, and definitely when commissioning a ship, should be a little bit higher than that,’ he told the ABC earlier this week.

‘Our ADF shouldn’t be left or right; they should be straight down the middle of what their job is, and their job is to defend our nation, our interests, our values, our sovereignty, but also when we go on operations, have an unapologetic aggression and violence to get the mission done.’

He added: ‘We’ve gone a little bit woke over the past few years and we can’t afford to be doing that.’ 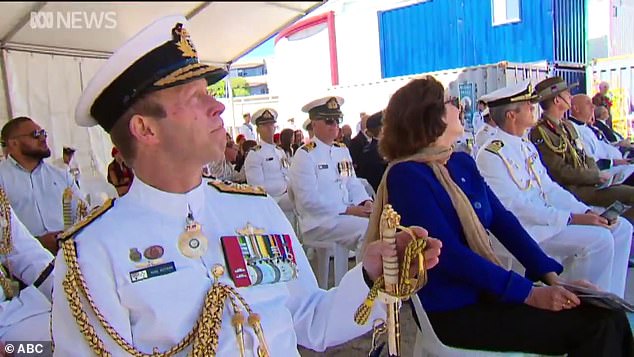 What will the HMAS Supply will be used for?

The Australian Supply Class ships are based on the Spanish Navy’s Cantabria Class design.

The ships are intended to carry fuel, dry cargo, water, food, ammunition, equipment and spare parts to provide operational support for the deployed naval or combat forces operating far from the port on the high seas for longer periods.

In addition to replenishment, the vessels can be used to combat against environmental pollution at sea, provide logistics support for the armed forces, and to support humanitarian and disaster relief operations following a natural disaster.