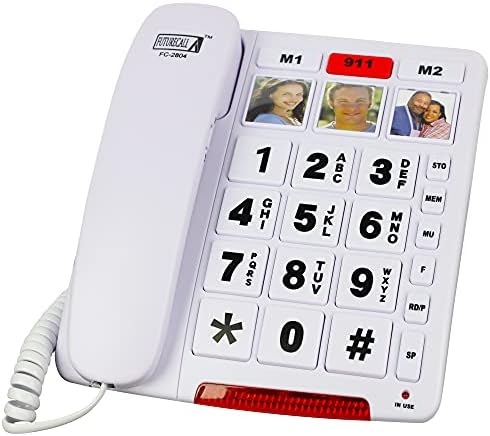 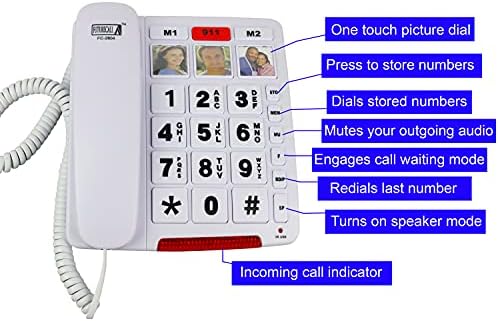 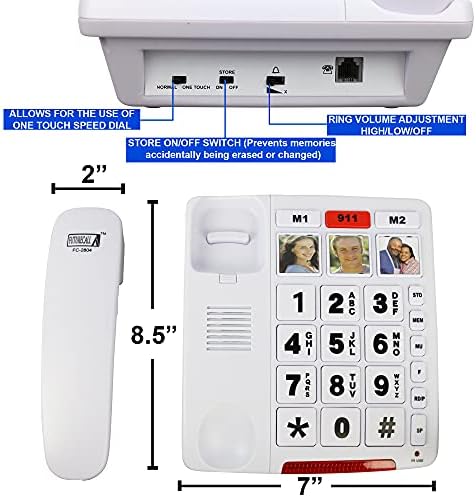 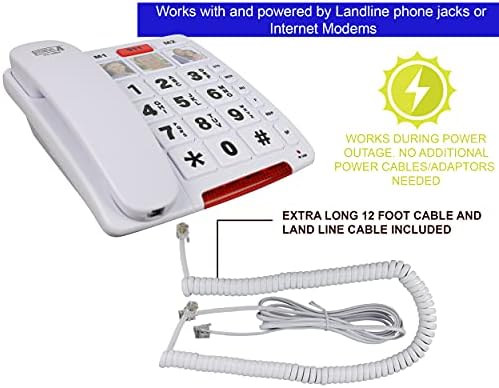 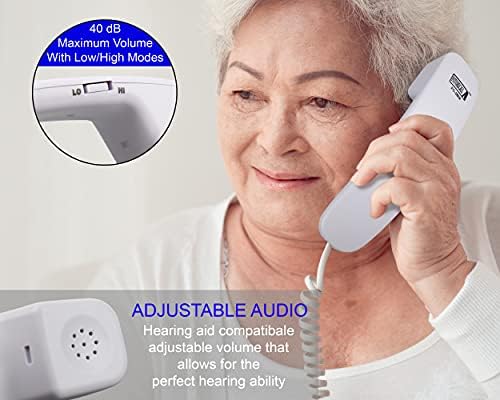 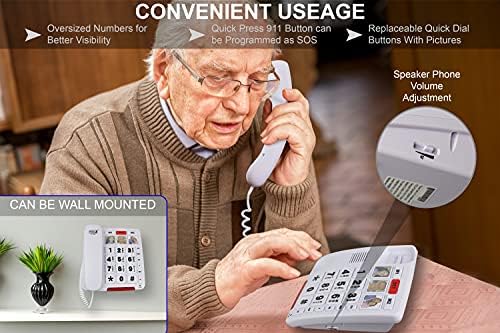 Standard telephones often have buttons that are too small to be identified or accurately pressed, especially for seniors. You’ve probably noticed your grandparents having trouble pressing the digits on your old home phone corded landline unit. Just because age tends to come with a host of difficulties doesn’t mean you should let your mom, dad, grandma, or grandpa suffer through such inconveniences. Luckily, we’ve got the perfect product to see them through their golden years. Give your seniors complete authority over their home phone with the Future Call FC-2804 Big Button Phone for Seniors. Future Call took the idea of sight impaired phones and amplified phones for hearing impaired seniors and merged them together creating perfect phones with big buttons for seniors. Designed with convenience and efficiency in mind, these house phones for seniors allow your loved ones to use big button & amplified telephones without assistance and makes a great corded phone for seniors. Aside from its large buttons, Future Call took an idea from their very popular picture phones for seniors and included it for the final touch. This big button telephone for seniors also features three one touch speed dial photo buttons that add a personal touch to the phone. These buttons also allows the user to dial saved contacts with ease. This way, they’ll be able to see who they’re calling very clearly and dial with just one push of a button. Furthermore, these telephones are designed to store emergency contacts efficiently. You’ll notice the 911, M1, and M2 buttons that allow you to save contacts for one touch speed dial only. You’ll also be able to pre-program up to 15 phone numbers as desired. Reasons to love our Simple landline phone for seniors: 1) Wall Mountable 2) Extra Long 12′ Handset cord 3) Loud telephone for hard of hearing 4) Big button phone for elderly 5) Phones that light up when ringing 6) Sight impaired phone 7) phones with big numbers 8) Hands Free Speakerphone

LARGE BUTTON PHONE FOR VISUALLY IMPAIRED SENIORS – Simple telephones for seniors are made with the convenience of senior citizens in mind and designed as an easy phone for seniors to operate and use. Its buttons are extra large for easy pressing and identification for those with limited eyesight. When the phone is ringing the red indicator light flashes. The Future Call FC-2804 large button phones for seniors brings comfort to those with limited eye site and aids them in their later years.
LOUD PHONE FOR HEARING IMPAIRED SENIORS – Our senior phone for elderly reaches 40db in handset volume. The handset includes a hi / low switch in which you can choose either 30db or 40db in volume. This is the normal range for most hearing impaired phones for elderly made for those who struggle with hearing impairment. Some seniors may have a severe situation and will need a corded phone that is built with higher db ranges. This is the exception for these house phones for seniors
MEMORY DIALING – Our large button phones for seniors includes 3 photo memory telephone buttons which are one touch speed dial, and also includes 2 additional one touch buttons M1 and M2 along with 10 other keys (0-9) that are one touch optional also making this a great dial phone for kids to call parents. Our landline phones for seniors make it very easy to program up to 15 memory buttons with emergency contacts to contact family or 911 with ease. Don’t worry, 911 key is reprogrammable.
TELEPHONE NUMBER STORAGE PROTECTION – These simple home phones for seniors come with a safe proof. After programing your picture phone buttons and your memory buttons, simply switch the STORE button, on the back of the phone, into the OFF position and nobody can accidentally program an undesired number. Simply switch it back into the ON position and resume programming. This house phone for seniors is powered by the landline and will keep your previously stored numbers safe during a power outage.
READ BEFORE PURCHASING – These Telephones for Seniors are corded phones for landline use and were primarily made for the elderly. This phone does not include caller id or voicemail. This corded telephone is a desktop phone and is wall mountable. This phone works great when connected to a Cable TV / Internet modem but is not a SIP VOIP phone. This phone includes an extra long 12′ cord. This landline phone for seniors includes a hands free speakerphone with volume control for elderly.

Before you rush and cut it off.. know the appropriate “story” for your face shape