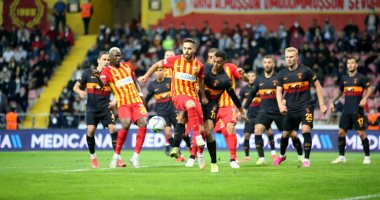 Galatasaray, who is playing on loan with Egyptian international Mustafa Mohamed, fell 3-0 to its host Kayserispor in the match that brought them together this evening, Wednesday, at Kayseri Ataturk Stadium, in the sixth round of the Turkish Super League championship for the current season 2021/22.

The goals of the match came from Mami Thiam, two goals, and Emraah Yassan, in the 39th, 45th and 53rd minutes, respectively.

The match witnessed the presence of the Egyptian international, Mostafa Mohamed, in the match from the beginning to the end, as Fateh Tarim, the coach of the team, was instrumental in forming the day.

Mustafa Mohamed continued his absence from scoring in the Turkish league during the current season in one of the unsuccessful cases facing the player in his current team, Galatasaray.

With this result, Kayserispor team advanced to the eighth place in the Turkish Super League standings with 10 points collected from winning 3 matches, drawing in one, losing 2 matches, scoring 8 goals and receiving only 6.

Meanwhile, Galatasaray team fell to the eleventh place with 8 points collected from winning two matches, a draw and a loss in the same, scoring 8 goals and receiving 9 so far.

The Galatasaray team is scheduled to host its counterpart Goztepe, which is scheduled to be held next Sunday, in the seventh round of the Turkish League championship, which will be hosted by the “Turk Telekom Arena”.

Galatasaray played the match with a formation consisting of..

4 ways to wear wide pants, the fashion of 2021.. suitable for any time and every outing

Common myths about power that you don’t believe.. most notably light on the stomach

Common myths about power that you don't believe.. most notably light on the stomach