A gangland kingpin who masterminded a UK-wide gun running racket has been jailed for 12 years after police caught him selling an antique revolver to a teenager.

Aqdas Vasi, 32, was arrested during a police operation after Tyrece Weaver, 19, was assigned to make a 360 mile round trip by taxi to collect the 19th century weapon for use by County Lines gangsters operating in the Hertfordshire town of Stevenage.

Officers kept surveillance on Vasi as he handed over the American-made Defender 89.32 Rimfire weapon to the teenager during a pre-arranged rendezvous in the student district of Fallowfield, South Manchester.

They then followed the private hire vehicle before swooping on a motorway slip road as the cab was about to head onto the M6 Southbound.

Weaver who had been sent North with a wad of cash was discovered in the back of the Toyota Prius with the revolver and five rounds of.32 ammunition on the rear shelf of the vehicle.

Police later searched Vasi’s Audi Quattro convertible and found a British made Bulldog revolver hidden inside a Sainsbury carrier bag in the boot.

Aqdas Vasi, 32, pictured left, was arrested during a police operation after Tyrece Weaver, 19, pictured right, was assigned to make a 360 mile round trip by taxi to collect the 19th century weapon for use by County Lines gangsters operating in the Hertfordshire town of Stevenage

Officers kept surveillance on Vasi as he handed over the American-made Defender 89.32 Rimfire weapon to the teenager during a pre-arranged rendezvous in the student district of Fallowfield, South Manchester

The father of one, who classes himself a ‘security consultant’, was an active member of the Fallowfield ‘Mad Dogs’ gang and had once been involved in an attack on a 16 year old boy who was later shot dead in a feud.

He and eight fellow members of the gang had also previously been banned under a court order from posting menacing photographs of themselves on the internet after they were pictured making gun gestures on social networking websites.

Weaver, of Ickleford, Hitchin, Herts was sentenced to five years youth custody after he admitted possessing a prohibited firearm and ammunition.

The teenager claimed he was pressurised to go to Manchester by Herts-based gangs who force youngsters as young as 10 into ‘county lines’ drug trafficking.

Firearms charges against a third man Paul Allum, 20, of Hitchin, Herts were dropped at an earlier hearing.

The police operation occurred on June 12 this year after detectives kept watch on Vasi’s home in Fallowfield are a tip off. He was seen getting out of a black BMW before getting into the passenger seat of a parked Mercedes van and shaking hands with the driver.

He was driven to a nearby rendezvous point to meet Weaver and they exchanged ‘fist bumps’ before all three men went back to Vasi’s home where he was seen approaching his Audi car and then holding ‘items’ in his gloved hands.

Weaver was then taken back to his waiting taxi before being driven back to Stevenage. Paul Dockery prosecuting said: ‘Officers followed the taxi until it was stopped by police on the southbound slip road to the M6 motorway at its junction with the A556 near Tabley.

‘Officers arrested all occupants of the taxi at that scene. On the rear shelf of the taxi behind where Mr Weaver was sitting was found a prohibited weapon, a Defender 89.32′ rimfire revolver, together with 5 bulleted cartridges. The weapon was capable of firing consecutive cartridges. Police resources were split after the taxi left Fallowfield and Mr Vasi was not pursued that evening.’ 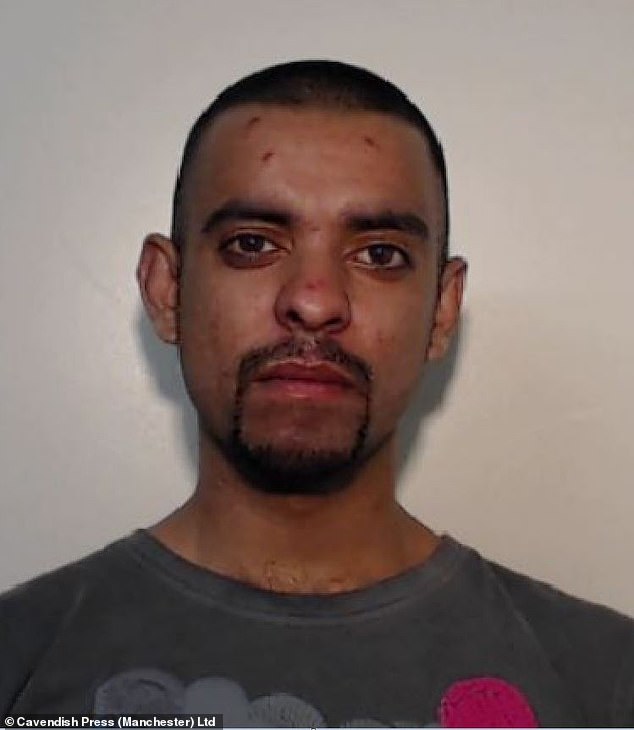 Vasi was arrested the following month after police were called to his home following complaints of a public disturbance. He was seen climbing out of a rear first floor window but then re-entering his home via the back door and officers raised the property.

Detectives demanded the keys to his Audi before forcing open the boot with an iron bar. The gun was found in a man bag hidden inside a Sainsbury’s bag and tests showed it was capable of firing.320 revolver ammunition.

Vasi denied all knowledge and responsibility for the firearm before making no comment. He had previous convictions for affray, disorderly behaviour drug possession and harassment.

In 2008 he was arrested after he and up to 16 fellow FMD members began a hunt for a gang rival who they accused of making a foray onto their ‘turf.

They tracked down 16-year old Giuseppe Gregory who resorted to hijacking a car in a bid to flee them – but when police were called to the scene to arrest the youngster, the gang began circling the officers in a ‘predatory and volatile manner,’ making gun gestures with their hands. They were arrested when officers called for back up.

At the time a judge accused the gang of ‘acting like a pack of wild animals’ whilst police said Gregory was ‘lucky’ to be arrested because they feared the gang would have killed him. The youngster was shot dead eight months later in revenge for another teenager’s murder.

In mitigation for Vasi, defence counsel Oliver Jarvis said no gun had been loaded or been ready for use and added: ‘One of the guns was made in the late 19th century and was not a more modern weapon. There is no evidence in this case of greater criminal intent.’

For Weaver whose godmother is a nurse, defence counsel Philip Sutton said his client had targeted by gangsters due to his use of cannabis and learning difficulties.

He said the teenager thought he was going to Manchester to pick up a stash of drugs and had no prior knowledge of a firearm.

Mr Sutton added: ‘Pressure had been put on him and the message was made clear hat certain parties knew where he and his family lived. He was told to go to Manchester and take a quantity of cash and was given certain instructions.

‘He handed the cash over and it was only then he realised what he was handling was a gun. There was an element of County Lines here in that those involved in drugs have used this young man to do their dirty work.’

Sentencing Judge Tina Landale said: ‘Arrangements were made for the supply of a gun from Manchester to be taken some distance to Stevenage as a part of a criminal enterprise. There was no lawful purpose for these weapons.

‘It is trite to say that too many lethal weapons are available, carried, distributed or used. They have devastating consequences and are properly described as a scourge on our society.’