RIDGELAND, S.C. – There’s another lefty to deal with on the PGA Tour.

Three weeks after World Golf Hall of Fame member Phil Mickelson stunned the golf world with his win in the PGA Championship, young southpaw Garrick Higgo won the Palmetto Championship at Congaree in just his second start on the PGA Tour.

Inspired by a morning phone call from Gary Player, the 22-year-old South African sensation, a winner three times on the European Tour including this year’s Gran Canaria Lopesan Open in April and the Canary Islands Championship in May, stormed back from six shots, closed with a 3-under-par 68 and took advantage of Chesson Hadley’s late collapse to win.

“(Player) told me he’s done it before quite a few times, the way he’s won from six behind, seven behind. He just said don’t think too much about what the other guys are doing, just kind of do your thing and stay up there, and you never know what could happen,” said Higgo, who also won the 2020 Portugal Open, which makes four wins in nine months. He moved to 39th in the world ranking.

Higgo shot 68-69-68-68 to finish at 11 under. Higgo started six shots back and his comeback in the final round is the largest this season on the PGA Tour; Brooks Koepka came from five back to win the Waste Management Phoenix Open.

Higgo, who earned a two-year exemption on the PGA Tour to go with his exemption on the European Tour, eagled the 12th and birdied the 14th while others on the leaderboard fell back on the back nine, no one more so than Hadley, who had missed the cut in his last four starts and in nine of his last 11.

“I usually am a scoreboard watcher. For some reason today, I didn’t watch it. I’m just trying to stay in it. I didn’t really want to try and push,” Higgo said. “When I made eagle on 12, I didn’t have to scoreboard watch. I knew already I was kind of up there or close enough. It was just whether Chesson was going to run away with it or if we were going to stay up there and have a chance.

“Luckily, we did, and I’m happy that I capitalized on it.”

Hadley, who started the final round with a four-shot lead, was visibly uncomfortable as he made bogey on the second and third holes. But he looked steady on the back nine and led by two shots heading to the 16th tee. But he bogeyed 16 after a poor drive, 17 after a poor approach and 18 after another poor approach.

Hadley shot 75 to finish in a six-way tie for second. 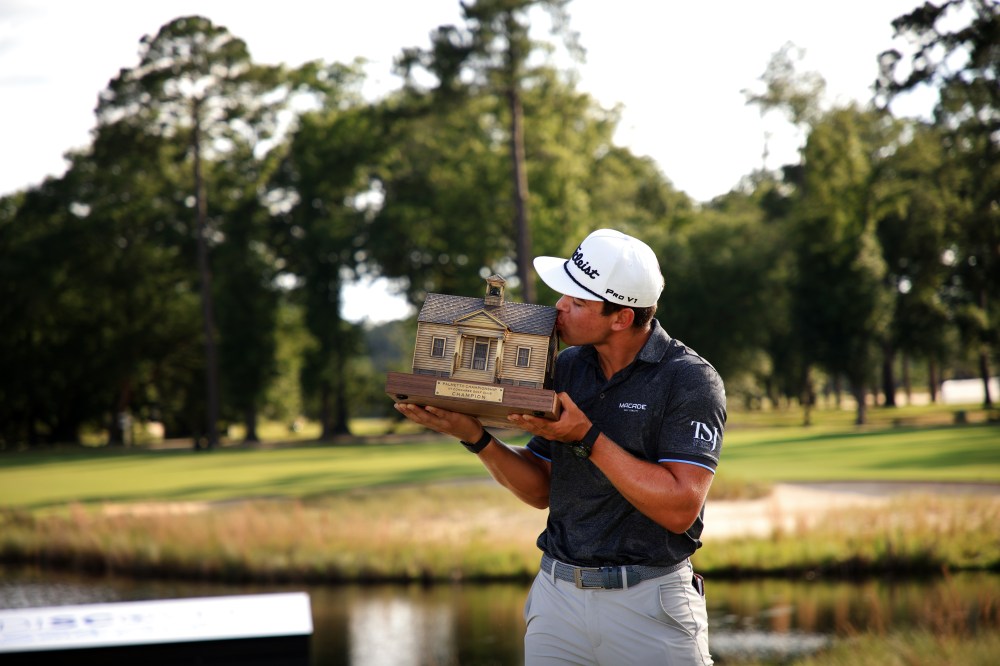 “I just didn’t have it today. It was bad and got to do better, and I will. Just got to keep after it. I was uncomfortable out there, and I could never really hit some good shots to try to settle me down.

“I hate the word choked. That’s not the right word because that’s a very negative word, but I didn’t handle it the way I needed to handle it.”

Bo Van Pelt, who thought his career was over after tearing his labrum in his right shoulder in 2016 and then having two more procedures to remove bones spurs in his AC joint in the shoulder and one rib, grabbed a share of the lead with an eagle on the 13th before falling back with bogeys on two of his last three holes into a tie for second. He shot 68 to finish at 10 under. It was his first top-10 since 2015.

“I didn’t play 18 holes for over three years,” he said. “I had three shoulder surgeries, so I thought I was done, to be honest. My hand kind of got numb. Got referred to a guy down in Dallas named Greg Pearl, who looked at me and said, ‘I’ve got to take out your first rib.’ As soon as he did, my shoulder didn’t hurt anymore. I said, well, let’s see if I can get my game back in shape.

“It’s been fun. It’s been tough. It’s kind of like starting over.”

Joining Hadley and Van Pelt in second were Doc Redman (67), Tyrrell Hatton (68) and Hudson Swafford (66), who would have earned a spot in the U.S. Open with a win.

World No. 1 Dustin Johnson was tied for the lead two holes into the third round and then got within one shot of the lead on the back nine of the final round before falling back with a triple-bogey 7 on the 16th. He tied for 10th.

Higgo had a plane to catch to get to San Diego for the U.S. Open at Torrey Pines. He’ll mute his celebration – “I won’t go crazy tonight,” he said – and he won’t heighten his expectations despite his four wins in nine months.

“No, it doesn’t change my expectations. I think I’m good with that,” he said. “I’ve just gone to another level now. So I’ll just see what my game can do. I enjoy playing and seeing what my game does and where it takes me.

“I enjoy playing. I’m a very tough competitor. I don’t really get down on myself. It’s a cliche, but I try and stay in the fight. I think I just do that really well. I wouldn’t say that there’s something that I do that’s out of the ordinary which makes me special, but I’m a good competitor, if that makes sense.”

And Higgo will have to decide on his playing schedule – does he concentrate on the PGA Tour, the European Tour, the Sunshine Tour, or does he go fulltime global?

“My dream’s always been to play on the PGA Tour permanently, so at the moment, I’ll focus on that, see if I can keep going,” he said. “But I’ll play in Europe for sure. My focus is still Race to Dubai, see how I can finish on that, and then play a couple of Sunshine tournaments as well. If it wasn’t for them, I wouldn’t be here.”

Lego unveils its largest ever set – a 9,036-piece Roman Colosseum that takes two-weeks to finish

The household of the Texas firefighter who was discovered lifeless in a toilet window at a...