Tottenham ended the weekend back at the top of the Premier League after a goalless draw with London rivals Chelsea.

Elsewhere, reigning champions Liverpool drew 1-1 at Brighton as a controversial refereeing decision went against them, with the hosts awarded a last-minute penalty.

Manchester City returned to winning ways in the league with a 5-0 defeat of Burnley, while Manchester United came from 2-0 down to beat Southampton 3-2, and Wolves won 2-1 at Arsenal.

Everton were beaten by a relentless Leeds, and West Brom broke their winless run with victory over bottom-of-the-table Sheffield United, who remain without a victory.

Fulham won at Leicester to move out of the bottom three, while West Ham climb to fifth with victory over Aston Villa.

But who impressed me in the Premier League this week? Here’s my team. Read about why I selected them below and choose your best XI at the bottom. 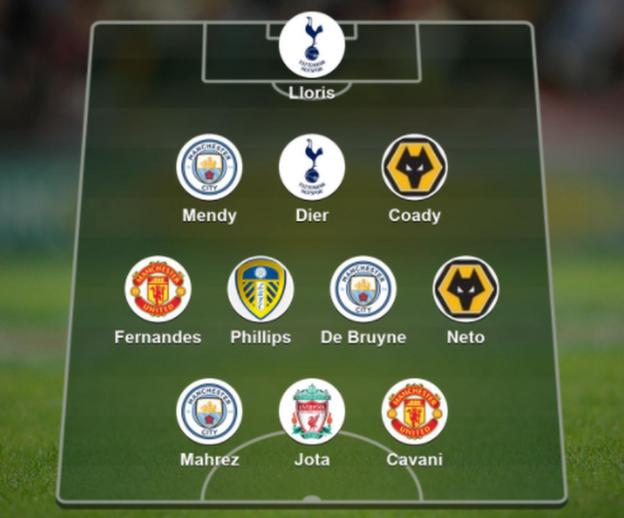 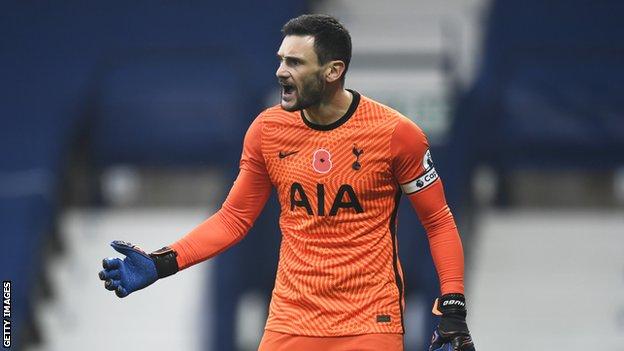 Hugo Lloris: I was torn between Edouard Mendy and Hugo Lloris. Both keepers handled the occasion well with neither having a great deal to do, but what they did was exceptional. The shot from Serge Aurier need two strong hands from Mendy and the Senegal international made sure the ball was palmed far enough away not to create any follow-up problem. However it was the save from Mason Mount at full stretch by Lloris that provided a clean sheet and a point for Spurs that took them to the top of the table. 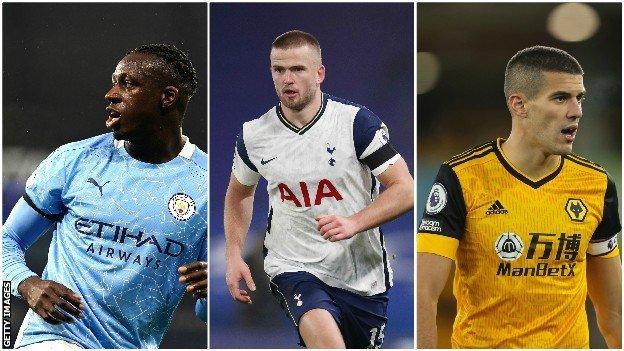 Benjamin Mendy: This lad has been a conundrum to me for some time. He’s quick, built like Samson, but often makes poor decisions when the game becomes intense.

However, I had to include the Manchester City full-back in my TOTW because of his brilliant finish against a Burnley side who looked resigned to a beating the moment the referee blew his whistle. It wasn’t just the quality of Mendy’s volley that impressed me but the way he checked his run, not once but twice, to ensure he wasn’t caught offside. I’ve seen strikers mess that up.

He made the best of the most glorious pass from Kevin de Bruyne and then finished accordingly. Very impressive.

Eric Dier: Spurs’ draw at Chelsea was a typical Jose Mourinho performance. No frills, no risks, and he went away with a point for his trouble.

It was also a desperately dull affair, especially in the second half. Just the way the Spurs boss would have liked it away from home.

However, it’s the second consecutive week Eric Dier has made my TOTW. It wasn’t easy for Dier, as he had Joe Rodon making his full debut beside him, and on a different day two mistakes by Rodon might have been exploited.

What is most interesting is the point won at Stamford Bridge, as dull as it was, takes Spurs back to the top of the table. Something very strange is going on at Spurs when Dier is their star performer two weeks in a row, Spurs keep another clean sheet, and are top of the league again.

Conor Coady: It was an excellent performance by Wolves in the win at Arsenal. Having lost Raul Jimenez following an awful clash of heads with David Luiz, they recovered extremely well and outplayed Arsenal in the end.

At the heart of the performance was their captain Conor Coady. In a new-look back four, the England defender marshalled his troops brilliantly.

Once again, Arsenal coach Mikel Arteta left his best striker – Pierre-Emerick Aubameyang – isolated for much of the match and brought on Alexandre Lacazette (a proven goalscorer) with only 10 minutes remaining.

So let me get this straight – the Gunners were playing at home against Wolves and played with only one recognised goalscorer up front? 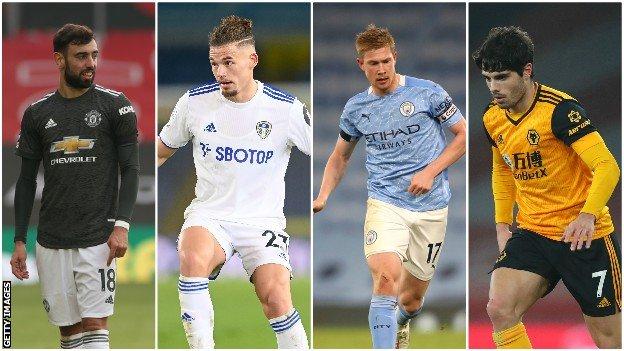 Bruno Fernandes: Had it not been for the determination of Bruno Fernandes, Manchester United would be licking their wounds. The Portugal international was yet again United’s inspiration, leading an impressive comeback at Southampton.

With five minutes left there was only one team that was going to win this match, and it wasn’t the home side. The more the Saints started to run out of steam, the more United began to pile on the pressure.

If United boss Ole Gunnar Solskjaer can get Paul Pogba in the right frame of mind and playing with Fernandes and Edinson Cavani, anything is possible.

Kalvin Phillips: Leeds missed Kalvin Phillips against Leicester and Crystal Palace, but not against Everton. The England international is making a name for himself, and was far too sharp for the Toffees.

This kid reminds me of a young Bryan Robson, when the former Manchester United and England captain played for West Brom. Phillips can cover the ground, he’s not afraid to stick his foot in, and sees the pass. He doesn’t immediately grab your attention but given time you begin to realise the enormous contribution he’s making to the game.

I think he’s the perfect replacement for Jordan Henderson and I don’t mean just for England.

Kevin de Bruyne: There is something slightly unfair, if not inevitable, about putting Kevin de Bruyne in my TOTW for his performance against Burnley.

Without being too unkind to the famous Lancashire club, they were lambs to the slaughter. The absence of fans wasn’t the only reason this game seemed like a training match, but the way De Bruyne carved his way through the visitors made the fixture look even less authentic than normal.

City played Olympiakos in the Champions League in midweek but changed their line-up so as not to overburden their players against a less demanding outfit and it paid off.

Read more about my thoughts on the five substitutes row in the Crooks of the Matter, below.

Pedro Neto: Not since Andy Gray and Kenny Hibbitt were in the team in 1979 have Wolves won at Arsenal.

Daniel Podence may have got the winner but it was the goal and the assist by Neto that stole the show. The Portugal international was involved in everything good about a Wolves performance that contained bite, guile and professionalism.

Arsenal, meanwhile, seem to have lost their way. In the last minutes of added time they had four opportunities to put the ball in the penalty area from wide positions and on each occasion the player on the ball couldn’t beat the first man. It rather summed up their performance. 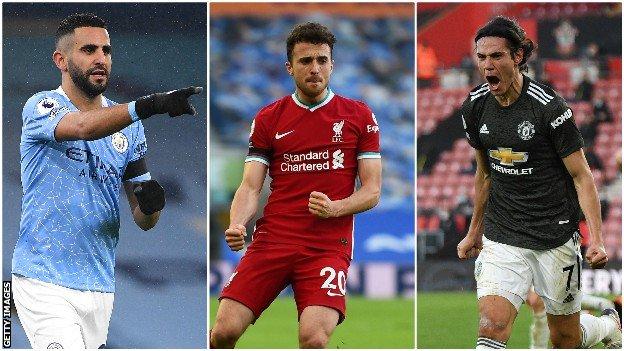 Riyad Mahrez: No change here then. Manchester City seem to batter Burnley every time they play them in the Premier League and this was no different.

Riyad Mahrez was given a taste a football in City’s Champions League victory over Olympiakos in midweek, then let loose on Burnley three days later and absolutely destroyed them.

His first two goals, bent into the far corner of the net with his left foot – a feature fast becoming a trademark for the Algeria international – were sublime. His third – a far-post header – was routine but enough to give the striker his hat-trick and a fitting way to finish what was no more demanding than an afternoon training session for City.

Diogo Jota: Regular readers will know what I think of VAR, and I have been saying so in this column since the infernal contraption was first introduced to the game.

Know-it-alls and snake-oil salesmen convinced the football public the video assistant referee would rid the game of controversy and disputes. Well, give me a moment while I try to compose myself from hysterical laughter.

Even Liverpool captain Jordan Henderson has joined the chorus demanding the technology has only a limited role to play in the modern game. I wish there were a few more like him. It’s about time the players found their voice on this issue.

Fortunately, Liverpool have recently signed Diogo Jota and everything he touches at the moment seems to turn to goals – and not even VAR can stop him.

Edinson Cavani: Whatever your thoughts about United boss Ole Gunnar Solskjaer, he’s quite decisive about his substitutes.

The introduction of Edinson Cavani against Southampton was decisive. From the moment Mason Greenwood left the field and Cavani came on, United looked a different proposition up front.

The link-up play between Marcus Rashford and the former Napoli and Paris St-Germain forward sealed an impressive comeback for United. Southampton paid the price for their lack of ruthlessness.

What’s going on? Is the League Managers’ Association losing control of its members?

Last week we had Jose Mourinho pointing the finger at Pep Guardiola and suggesting the Manchester City coach was encouraging Raheem Sterling to miss England matches in order to rest his player prior to City’s European and domestic programme.

This week it was Jurgen Klopp who threw Chris Wilder under the bus with his “selfish” jibe, because the Sheffield United coach spoke his mind in a recent Premier League meeting and refused to accept five substitutes, instead of the current three, giving the top clubs another advantage on top of the ones they already have.

It would appear the big clubs are no longer satisfied having the best players, the most money and the best resources; they now want adequate recovery time, having played in the most financially lucrative European competitions, so they can return to their domestic leagues fresh enough to give their opposition a damned good hiding.

Why should Wilder agree to that? And why a rule change 10 games into the season?

Wilder’s team are already fighting for their lives. He’s not playing in the Champions League or any other European competition for that matter. He simply wants to remain in the best league in the world and to do that he needs to take advantage of those teams who want the glory and the money associated with European success. It’s what gives teams like Sheffield United a chance in the Premier League.

What’s more, television companies have paid a king’s ransom to broadcast live football matches on our screens and are perfectly entitled to set game times to suit their audiences. To complain about the TV scheduling now, having taken the money, is rather like complaining about the five-course meal having just scoffed the lot.

If Klopp is genuinely concerned about his players’ wellbeing, don’t wait for them to get injured – simply manage your resources and rotate your players. You had enough of them at the start of the season.

Pick your team of the week

Here's why Ryan Reynolds doesn't want a street named after him in Vancouver, Canada

Covid: Teachers ‘not at higher risk’ of death

Here's why Ryan Reynolds doesn't want a street named after him in Vancouver, Canada

How could The Crown exploit a widow's very private tragedy?

US Election in Louisiana: Why lives depend on Donald Trump and Joe Biden