It was another weekend with plenty of goals in the Premier League with Tottenham thrashing Manchester United 6-1 and Aston Villa hammering champions Liverpool 7-2.

Chelsea eased to a comfortable 4-0 win over Crystal Palace, while Everton maintained their 100% start with a 4-2 win over Brighton.

Leeds and Manchester City played out an entertaining 1-1 draw and Newcastle beat Burnley 3-1. 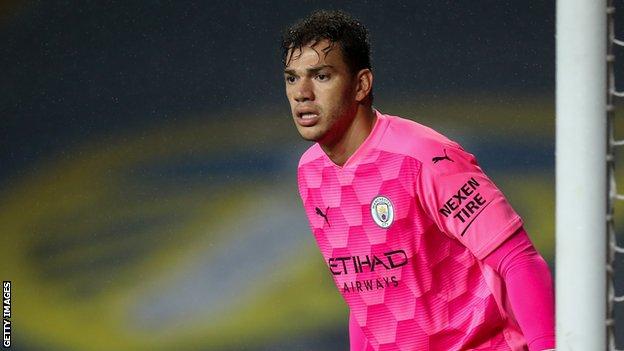 The save from Rodrigo was out of this world. How Ederson got his hand to the ball to push the header on to the bar I will never know. The Brazil international made a rare error and got punished for it but it was nothing less than Leeds deserved for their relentless pressure.

First-half saves from Stuart Dallas and Luke Ayling kept Leeds at bay but when the equaliser came, albeit from a mistake, nobody could begrudge Leeds’ good fortune. Another keeper and another time Leeds would have won this fixture.

Did you know? Ederson made six saves against Leeds, his most in a Premier League game since September 2019 v Everton. 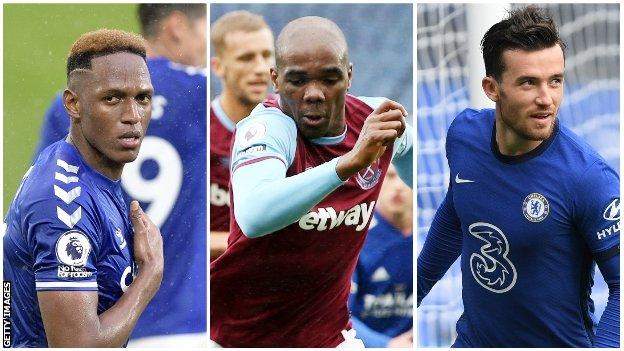 Yerry Mina: I’ve never been totally convinced about Yerry Mina’s defensive qualities. He’s certainly big, very strong and imposing but he also lacks moments in concentration, he is a terrible ball-watcher and prone to poor distribution.

However, that was not the Yerry Mina I saw against Brighton. The Colombia international was putting his body on the line for the team late in the second half when the game was won. He caused mayhem in the opposition penalty area and seems to be at the heart of this extraordinary renaissance going on at Goodison Park.

The look of disgust he gave Jordan Pickford when the England keeper dropped a catch I could have caught emphasised just how important keeping a clean sheet was to the Everton defender.

Did you know? Mina made more clearances (four) and blocks (three) than any Everton player in their win over Brighton.

Seven days later the Foxes found themselves on the end of a hammering and West Ham centre-back Angelo Ogbonna didn’t give Jamie Vardy a kick. This was an impressive away performance by the East London side and a superb clean sheet.

Did you know? Ogbonna gained possession 11 times against Leicester, the most of any player in the match.

Ben Chilwell: How well did Ben Chilwell dispatch that? Head down, toe down and wallop! The new Chelsea signing wasn’t joking when he smashed the ball into the back of the Crystal Palace net.

Chilwell has a lovely left foot and used it to cut Palace to shreds. However, what’s impressed me about Chelsea’s manager Frank Lampard is he doesn’t dither. If there is a decision to be made he makes it.

He had a goalkeeping problem and quickly sorted that out. He also inherited a left-back problem but seems to have solved that as well.

Did you know? Chilwell scored and assisted in a Premier League game for the second time in his career, the other was for Leicester v Southampton in September 2019. 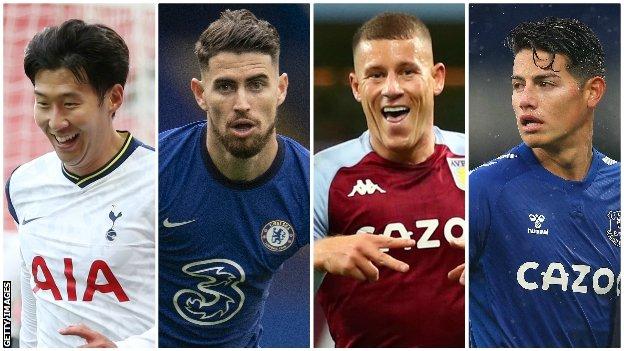 Son Heung-min: Four goals for Son Heung-min at Southampton and another two against Manchester United in a match that was too extraordinary to believe.

Admittedly Spurs and Son in particular took total advantage of 10-man United at Old Trafford after Anthony Martial received his marching orders. The South Korea international is in glorious form at the moment and his link-up play with Harry Kane is almost telepathic.

As for the sending-off that handed Tottenham the game? Well I have more to say about that in the Crooks of the Matter below.

Did you know? Son Heung-min has been involved in seven goals in two away Premier League matches this season (six goals, one assist).

Jorginho: His style of penalty taking is unique but very effective.

Having the ability to take your eye off the ball and watch the keeper takes skill and a lot of nerve. Why Tammy Abraham wanted to take the second awarded penalty away from the Italian when he had so successfully dispatched the first was a mystery to me.

Abraham is a centre-forward whose job it is to score goals and lead the line. Jorginho is a midfield player who wins the ball, feeds the team with quality service and takes penalties. Abraham would do well not to confuse the two roles.

Did you know? Jorginho has scored 10 of the 11 penalties he’s taken for Chelsea.

Ross Barkley: For a debut it doesn’t get much better than this. I’ve seen Ross Barkley make his debut for three different teams now and on each occasion he never fails to make an impression.

This time it was for Aston Villa and the opposition was Liverpool. He only signed for Villa on Wednesday and with only three days’ training he takes on the English champions and runs the show. The former Everton player has done his old club a massive favour by the way.

The defeat of Liverpool ensures Everton remain three points clear at the top of the Premier League table going into the Merseyside derby at Goodison Park. And that’s a big deal.

Did you know? Barkley scored on his debut for Aston Villa and had more shots than any other player in their match v Liverpool (six).

In fact the ball he received from Abdoulaye Doucoure suddenly sat up and really was a brute. I have seen chances like this missed before.

The Colombia international kept his eye firmly on the ball, knowing anything less than a perfect contact and the chance was gone. Rodriguez gave the moment the utmost respect and put the ball where it belonged – in the back of the net.

Players like Rodriguez don’t miss chances like that. That’s why Everton are top of the league. However, I doubt whether they will remain there if they don’t do something about Jordan Pickford.

Did you know? Rodriguez has been involved in five goals in two Premier League appearances at Goodison Park (three goals, two assists). 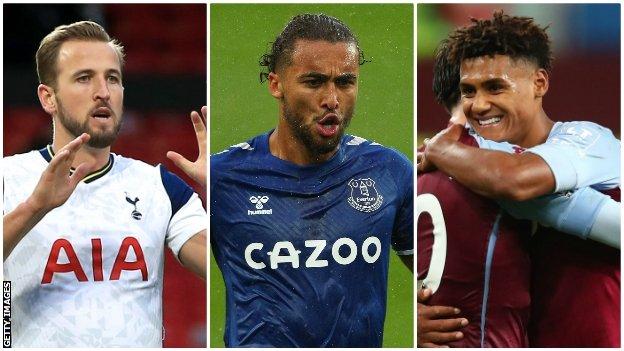 Harry Kane: What a week it’s been for Spurs and Harry Kane. Kane was desperately unlucky not to get into my team of the week after his exploits against Southampton when he put four goals on a plate for Son.

In fact one of my former team-mates told me in no uncertain terms what he thought of his omission. Well in midweek the England captain got a hat-trick against Maccabi Haifa and I simply can’t continue to ignore the one player in the Tottenham ranks who is leading the team at the moment.

Son may be scoring the goals but the unselfish attitude of Kane is quite extraordinary for a world-class striker.

Did you know? Kane has scored eight goals and assisted six more in his past seven Premier League games.

Dominic Calvert-Lewin: He can’t stop scoring can he? His ninth goal of the season saw him become the first Everton player to score in four consecutive Premier League matches.

A strange statistic when you consider the Premier League has only been in existence 27 years. I’ve got whisky older than that! Nevertheless it’s quite an achievement for a lad who went 10 games without scoring last season.

There is no doubt about it, Calvert-Lewin is in the form of his life at the moment and although his goal was reminiscent of former Everton greats like Bob Latchford and Graeme Sharp he’s not in that class yet. And neither of them played in the Premier League either.

Did you know? Calvert-Lewin has scored seven goals in three appearances at Goodison Park this season.

Ollie Watkins: I couldn’t believe what I was watching. A first-half hat-trick by a former Championship player against the Premier League champions? I thought I was seeing things.

When you consider there were those who questioned whether Watkins could score at this level this was no ordinary hat-trick.

The former Brentford striker took his goals brilliantly, especially his second and he really should have had four. Regardless, there is a more important point that needs to be made and it is that Watkins looks very comfortable in this league. I know it’s early days but he looks like a player.

Did you know? Watkins became the 10th different player to score a Premier hat-trick against Liverpool and first since Dimitar Berbatov in September 2010.

If you are going to send a player off then it should be for an offence worthy of the punishment. In other words the player deserved to go. There are the justifiable cases of course. When a defender deliberately pulls a player back or impedes the last man and stops a goalscoring opportunity.

The most obvious offence is when a player is violent to another or there is dangerous or reckless play. All of the above are misdemeanours that determine the outcome of a game. What I cannot stand is when a referee sends a player off for a push or a shove or worse a spontaneous reaction when a wrong has already taken place.

Martial’s sending-off against Spurs, for raising his hands in response to Erik Lamela throwing his arm in his direction, was, in my opinion, unfair. I could have lived with both receiving yellow cards but if you had to send a player off then they both should have gone.

However, what makes a complete mockery of the game is when a player deliberately takes another out and receives a yellow card but remains on the pitch.

How referee Anthony Taylor left Luke Shaw on the field, after he had taken Lucas Moura out of the game, and had absolutely no interest in playing the ball, was nothing short of rank hypocrisy.

Referees are there not just to officiate but to protect the integrity of the game. They can only do that if they assess incidents objectively but also with a degree of empathy.

Glowing-up! People who used to be 'ugly ducklings' share their unrecognisable before-and-after snaps