Everton and Aston Villa continued their unbeaten starts, while West Brom and Burnley ensured we finally had a goalless draw in the Premier League.

The Merseyside derby had plenty of controversy as Liverpool and Everton played out a 2-2 draw at Goodison Park.

Tottenham threw away a 3-0 half-time lead to draw with West Ham – and there were another six goals at Stamford Bridge as Chelsea were held to a 3-3 draw by Southampton.

Here’s my team of the week. Have a read and select yours at the bottom. 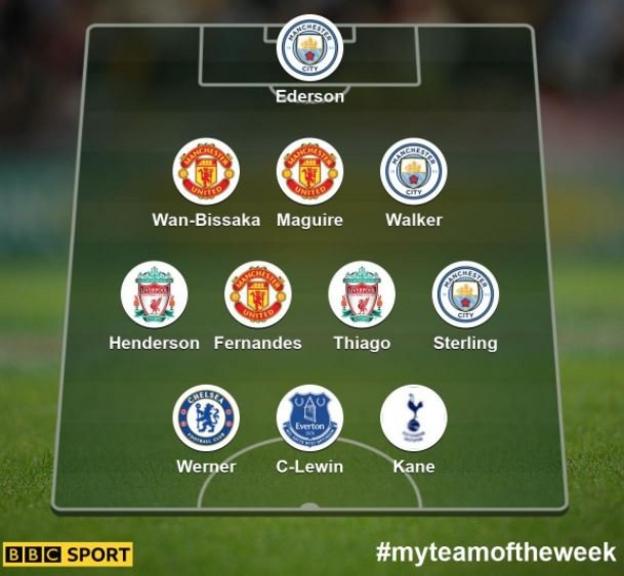 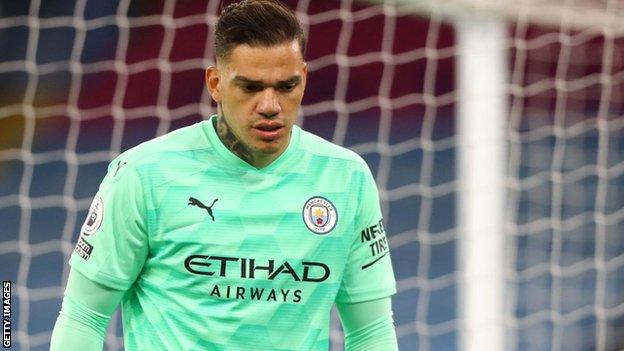 Ederson: A clean sheet for Manchester City must have been very satisfying for boss Pep Guardiola, not to mention his new-look defensive unit, considering their goals-against record so far this season.

One of the few constants is Ederson. His goalkeeping display against Arsenal – the team that beat them in the FA Cup final – had to be outstanding. Two saves from Bukayo Saka – the second world class – secured the points for City.

However, to see the Gunners playing Willian in a striking role with Alexandre Lacazette, a proven striker, on the bench – particularly having seen what Leicester did to City – was desperately disappointing.

Manager Mikel Arteta wasn’t being calculating – it was padding and the Gunners got what they deserved: nothing.

Did you know? Ederson made 45 passes on Saturday – the second-highest total by a keeper – and racked up three saves on the way to a clean sheet. 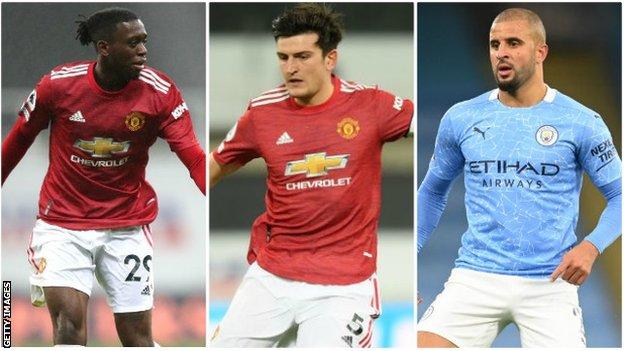 Aaron Wan-Bissaka: I have continued to watch this young man’s game develop ever since I first set eyes on him. His meteoric rise is no surprise.

Aaron Wan-Bissaka has turned into a first-class defender and arguably the best tackler in the Premier League. However, his forward play requires improvement and slowly but surely the Manchester United full-back appears to have worked on this aspect of his game.

His goal against Newcastle was simply outstanding. Wan-Bissaka has never been afraid to get into advanced areas of the pitch but I’ve never seen him finish like that – and if his celebration is any indicator then the kid clearly enjoyed it. We could be seeing more of this.

Did you know? Wan-Bissaka became the 116th player to score for Manchester United in the Premier League on what was his 38th league appearance for the club.

Harry Maguire: If ever there was a weekend when United manager Ole Gunnar Solskjaer needed a group of players he could depend on then this was it.

With speculation rife about his job hanging by a thread, Solskjaer kept faith with his captain Harry Maguire, who has had a difficult time both on and off the field in recent months.

Well, they say “cometh the hour cometh the man” and that phrase was epitomised by Maguire’s performance against Newcastle. Playing for Manchester United and England is a huge privilege but they also come with enormous spotlights. Some players can handle that and some can’t.

Did you know? Scorer Maguire made 81 passes in the match at St James’ Park and won seven aerial duels – both game highs.

Kyle Walker: This was a much-improved performance from the former Tottenham full-back. Kyle Walker looked quite commanding between the two penalty areas against Arsenal.

He appears fit and strong and handled Saka extremely well. The England defender is a seasoned professional now and I don’t expect him to be giving juvenile penalties away, as was the case when I last saw him against Leicester prior to the international break.

At this stage in Walker’s career, he should be a leader in the Manchester City defensive unit and not just a participant.

Did you know? Walker completed 58 of his 65 passes and challenged for two tackles as he helped nullify the Arsenal attack. 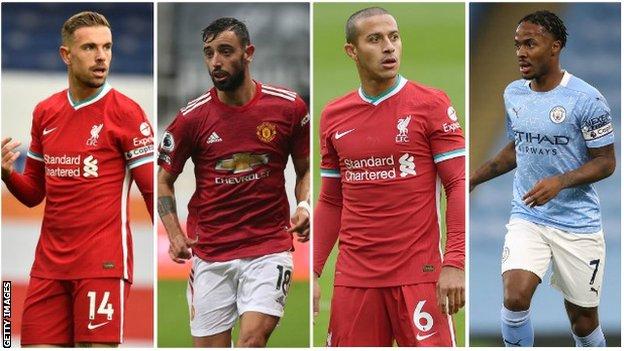 Jordan Henderson: Whether you thought Liverpool were worthy of the victory or not, Jordan Henderson’s injury-time goal should have stood on the basis that the offside decision was indistinguishable to the naked eye on the camera.

When we have to take the word of the video operator or the scientist when it is impossible to be definitive, then the referee must be the final arbiter, otherwise the game is in danger of spiralling out of control.

Henderson was the driving force behind what should have been a Liverpool victory. Sorry, Evertonians.

Did you know? Henderson made nine ball recoveries, created two goalscoring chances for team-mates and attempted 64 passes against Everton (the second most passes attempted in the game).

Bruno Fernandes: When you miss a penalty, it takes a special individual to forget about it and play on as if it never occurred. Bruno Fernandes not only played as if the incident never happened but used it as a motivating factor. The Portugal international was the star of the show in an impressive away victory for Manchester United.

Since his arrival, Fernandes has been first class in every department. What a contrast then with Paul Pogba, a player with arguably more ability but who can’t seem to take United to the next level.

Fernandes is the perfect midfield partner for a fit and focused Pogba. Maybe that’s the problem with Pogba – he can neither remain fit nor focused.

Did you know? Fernandes has been directly involved in 20 goals in his 18 Premier League appearances for Manchester United (11 goals, nine assists), scoring in his past three games.

Thiago Alcantara: What was Jordan Pickford doing on the field? The tackle on Virgil van Dijk was so villainous it should have come with a government health warning! The same was true of the tackle by Richarlison on Thiago Alcantara but that was appropriately dealt with by referee Michael Oliver.

Thiago is clearly a class act and totally complements the way Liverpool play. He also handled the Merseyside derby like he’d been playing in them all his life. That said, when you’ve played in El Clasico [Barcelona v Real Madrid], there is little else to compare.

Did you know? Thiago led the way at Goodison Park with 79 passes in the match and another game-high 99 touches of the ball.

First, he now scores goals on a regular basis. And secondly, he is assuming the role of a leader for his club. No Kevin de Bruyne or Fernandinho so Guardiola gives the captain’s armband to Sterling – and quite rightly.

Not only is Sterling a senior professional now, but he commands respect. I think it’s time England manager Gareth Southgate started to make the same considerations.

Did you know? Sterling has had a hand in each of Manchester City’s past five goals in all competitions (four goals, one assist). 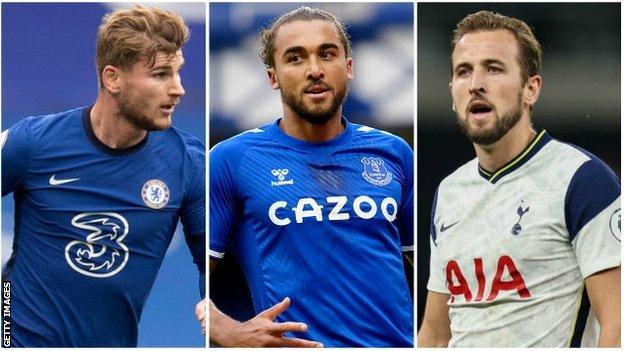 Timo Werner: Two goals in quick succession by Timo Werner should have put the lid on Southampton’s visit to Stamford Bridge.

Manager Frank Lampard has really got to do something about his defence. It’s a joke. Chelsea can’t continue leaking goals like this. They’ve conceded nine in five games.

What a shame because they have scored 13. However, what really impressed me about their attacking play was Werner. The German is quick, has good feet and is unselfish.

I’ve seen players go looking for hat-tricks when they have already scored two goals and Werner could have done the same. Instead, he laid the ball on a plate for Kai Havertz to score. That’s how partnerships are made.

Did you know? Since the start of last season, only Robert Lewandowski, Ciro Immobile and Cristiano Ronaldo have scored more goals in Europe’s top five leagues – England, France, Germany, Italy and Spain – than Werner (30), who scored his first two league goals for Chelsea.

Dominic Calvert-Lewin: This had all the elements of a classic Merseyside derby. Everton going into the game top of the table, while Liverpool needed to respond to a 7-2 mauling by Aston Villa.

What did become almost immediately apparent was that both sides had very ordinary goalkeepers.

Just as well there’s nothing remotely ordinary about Dominic Calvert-Lewin’s performances this season. His headed equaliser against Liverpool was simply sensational. In fact, the Everton and now England striker is in the form of his life.

Did you know? Calvert-Lewin is the first player to score in each of Everton’s first five league games in a season since Tommy Lawton in 1938-39.

Harry Kane: Well, this game should have been put to bed. Harry Kane’s two goals and his assist for Son Heung-min was more than enough to put the game out of sight for West Ham.

What’s more, I thought Spurs boss Jose Mourinho developed a name for closing games out. What’s happened to the man who used to scold his players for crossing balls into the box in the final minutes of a game instead of wasting time and holding the ball up in the corners?

Can that taxi driver ask him that question the next time he does one of those TV adverts looking so pleased with himself and telling us how special he is?

Did you know? Kane has registered seven Premier League assists this season, his joint-most in a single campaign (also in 2016-17).

Liverpool’s request to the Premier League to investigate the video assistant referee (VAR) decisions during their draw at Everton was totally justifiable.

The champions had every right to ask those responsible for the rules and regulations to review Saturday’s decisions, especially when their interpretations were found to be so badly wanting.

What made the Merseyside derby so contentious was the reasoning behind the decisions didn’t make sense and on that basis Liverpool deserved an explanation. VAR was introduced to make the game more equitable; an opportunity for science and technology to clear up human errors. I would like to place on record it has done nothing of the sort. In fact, VAR has made the game unenjoyable, complicated and grossly inconsistent.

There were two extraordinary decisions made in the Everton v Liverpool fixture that changed the face of the game on each occasion: the tackle by Pickford on Van Dijk which should have resulted in Pickford receiving his marching orders and Henderson’s goal which was eventually ruled offside.

While I understand Liverpool’s desire to have the incidents investigated, there was no question that the goal could ever have been reinstated or all three points awarded to the Reds. Such a decision would have been catastrophic and signalled the end of the world was nigh! Neither should Pickford have been sent off retrospectively. How could that have been justified when he wasn’t even booked?

What we must do – and I have been saying this ever since VAR was introduced – is insist that the officials use their television monitors when in doubt and take back control of the decision making.

Pick your team of the week

The founder of Filecoin denies that miners are on strike

Iraq killings: Who’s behind a series of murders?

Holocaust Memorial Day 2021: ‘It’s sad when I sit there alone’

Reuters Shannon Stapleton Supporters of US President Donald Trump try to storm the Congress headquarters amid...