Manchester City suffered a shock 2-1 home defeat against Leeds and Manchester United are now 11 points behind the league leaders after a 3-1 win at Tottenham.

On Monday, West Brom eased past Southampton and Brighton and Everton drew on the south coast. 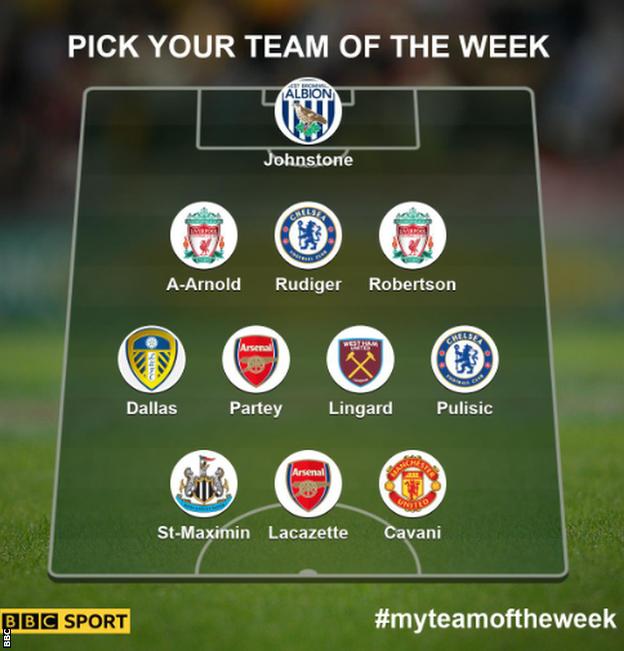 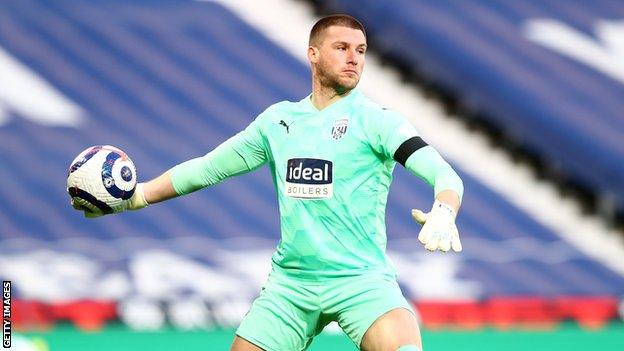 Sam Johnstone: Sammy Lee’s reaction was far more than anything the West Brom coach could have said after the game. Clean sheets for the Baggies at this stage of the season might be the difference between the West Midlands team staying in the Premier League or not. Sam Johnstone’s saved penalty from James Ward-Prowse, apart from being a damn good save, will be used as another route to survival along with their impressive victory away at Chelsea. I might think West Brom are down but their players don’t and that’s all that matters. 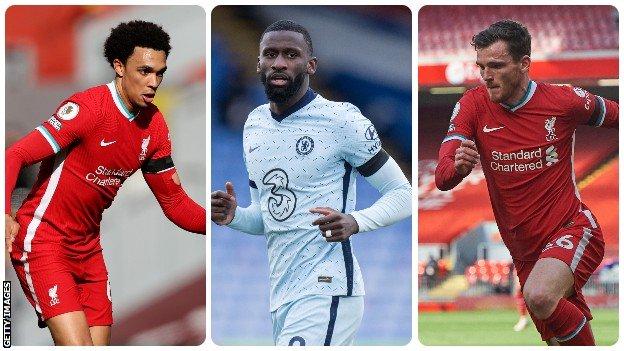 Andy Robertson: I think it sums up Liverpool’s season when I find myself selecting both Andy Robertson and Trent Alexander-Arnold for my team of the week with not a Liverpool striker or midfield player in sight. It took a second-half performance by both full-backs to seal the points for the Premier League champions, but it wasn’t pretty. Liverpool have probably suffered more than any other team without their fans, especially at Anfield, but Robertson has made as big a contribution as any member of the team to ease the suffering. It was his magnificent run that not only provided the assist for Mohamed Salah’s equaliser but turned the game around.

Did you know? No Liverpool player created more chances than Robertson (three) against Aston Villa.

Antonio Rudiger: What a week Chelsea have had. They were impressive in midweek, when they kept a clean sheet in the first leg of their Champions League quarter-final against Porto. To then return to their domestic programme and produce an even better display against Crystal Palace is to be applauded. Rudiger featured prominently in both games and had a brilliant header cleared off the line against Palace. That well-publicised training ground bust-up between Rudiger and Kepa Arrizabalaga has clearly had an effect on the dressing room and maybe forced the team to close ranks. Whatever it is, they suddenly look like a team that’s up for the fight.

Did you know? No Chelsea player made more clearances (two), interceptions (two) or possession gains (nine) than Rudiger against Crystal Palace.

Trent Alexander-Arnold: Last week against Arsenal he produced moments of magic and pundits (including myself) were asking why Alexander-Arnold had been left out of the England squad. Three days later a mistake against Real Madrid had some asking why he is in the Liverpool team at all. The fact of the matter is, like all gifted footballers, he has good and bad moments. Against a dogged Aston Villa, who certainly know how to make life difficult for the opposition even when they are not playing great themselves, Alexander-Arnold scored a winning goal that very few full-backs in the world are capable of scoring. You don’t play for Liverpool having won European and Premier League titles and worry about what us pundits have to say.

Did you know? At 22y 185d Alexander-Arnold became the youngest player to score a 90th-minute winning goal in a Premier League match for Liverpool since Neil Mellor vs Arsenal in November 2004 (22y 24d). 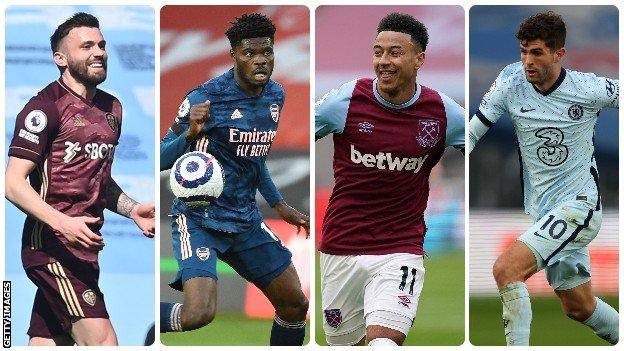 Stuart Dallas: I thought this might happen. If there was one team that could upset Manchester City at Etihad Stadium it was Leeds, but I didn’t think they could do it with 10 men. In the corresponding fixture City intimidated Leeds but Marcelo Bielsa’s men can be fearless at times and have often paid the price for their fearlessness – not this time. The architect of Manchester City’s downfall was Stuart Dallas. He took both his goals brilliantly and his second came after Liam Cooper was sent off for what can only be described as a horrendous tackle. Quite why Andre Marriner needed to see the incident a second time via VAR I really don’t know. Who goes to see the same horror show twice?

Did you know? Dallas became the first player to score a 90th-minute winner for Leeds in a Premier League game since Ian Harte vs Derby County in December 1999 and was the first player to do so for any side against Manchester City in a league match since Fernando Torres for Chelsea in October 2013.

Thomas Partey: It was refreshing to see Arsenal take the lead in a game and not throw it away, although there was a moment in the match against Sheffield United when they looked like they might. In the end it was a comfortable victory over the Blades, who looked rather dull to say the least. Thomas Partey played a significant role in the Gunners’ performance. The Ghana international has promised a lot since his arrival at Emirates Stadium but suffered from niggling injuries which have interrupted his progress. His ball for Alexandre Lacazette’s second goal showed the player’s class. Partey is not as reckless in midfield as Granit Xhaka and much better on the ball.

Did you know? Partey has completed 90 minutes in each of Arsenal’s last four Premier League games, having done so in just three league matches for the Gunners prior to this run. He also provided his second Premier League assist for the Gunners in their 3-0 victory over Sheffield United (the other against Newcastle in January).

Jesse Lingard: Yet another top-class performance from Jesse Lingard. Since his arrival from Manchester United the England international has taken the Hammers into the top four and made them look like serious contenders for a Champions League spot. Goals matched by bundles of energy, commitment and desire takes the player back to when he was producing excellent performances for Manchester United. He’s doing fantastically for West Ham, but he really needs to leave out the dance celebrations if he wants us to take him seriously.

Did you know? In only his ninth Premier League appearance for West Ham, Lingard reached double figures for goals and assists combined (eight goals, three assists). It is the quickest a Hammers player has ever done so, with Paul Kitson previously reaching double figures the fastest (12 games in 1997).

Christian Pulisic: I thought his first goal was brilliant and his second brave. For his first, Christian Pulisic picked his spot and put the ball in the only place it could have gone – into the roof of the net. As for his second, you can always recognise a goalscorer when he’s prepared to put his body on the line in return for glory. Pulisic did precisely that and received a sore leg for his trouble. I am in no doubt that Pulisic is a top-class player and capable of scoring 10-15 goals a season. However, in order to do that you need to be resilient and remain fit, and therein lies Pulisic’s problem – he cannot remain fit for any length of time.

Did you know? Pulisic has scored more Premier League goals against Crystal Palace than against any other side (four), while the only Americans to score more than Pulisic (13) in the competition are Clint Dempsey (57) and Brian McBride (36). 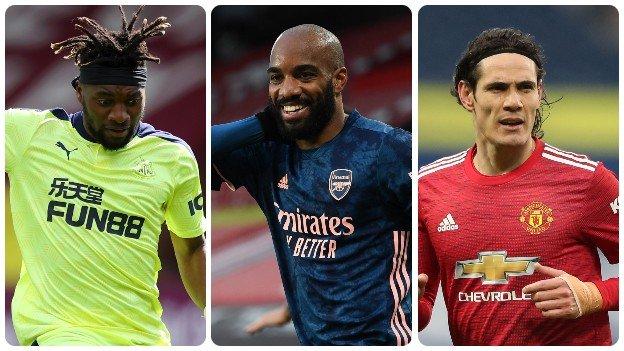 Edinson Cavani: I said Spurs have gone backwards under Jose Mourinho and the result against Manchester United proved it. The 6-1 victory in the corresponding fixture at Old Trafford in October is nothing more than a distant memory. Manchester United, on the other hand, have steadily improved their results under Solskjaer, are second in the table and still in the Europa League. The addition of Edinson Cavani, who ran Spurs ragged in the second half at Tottenham Hotspur Stadium, has had a profound effect on United’s fortunes. Something is definitely not right at Spurs. They look a shadow of the side that reached the Champions League final two seasons ago.

Did you know? Cavani became the oldest player to score a winning goal for Manchester United in the Premier League since Zlatan Ibrahimovic vs Sunderland in April 2017 (35y & 188d).

Allan Saint-Maximin: This was a massive win for Newcastle but one that was drifting away from them as early as the 18th minute. A goal down and with defeat staring them in the face, the Magpies unleashed Allan Saint-Maximin. Within minutes of the sub appearing on the scene the French winger assisted Newcastle’s first goal and scored the second. Burnley had been destroyed in a matter of minutes. It’s taken some time for Saint-Maximin to get over Covid and regain full fitness but he looks well over that now. A six-point gap with a game in hand – that’s what this win has meant for the club. It’s a relegation game-changer.

Did you know? Saint-Maximin became only the fifth player to both score and assist a goal as a substitute in a Premier League match for Newcastle, and first since Rolando Aarons against Tottenham in May 2016.

Alexandre Lacazette: Four goals in six matches tells the tale about Alexandre Lacazette’s form at the moment. I’m not entirely sure about Arsenal’s consistency but the striker is certainly playing his part. The Frenchman scored Arsenal’s first goal, which really was beautifully constructed by Bukayo Saka and Lacazette and slotted home with the confidence of a striker on top of his game. His second goal was equally well taken and I wonder how much the captain’s armband has helped Lacazette settle in a side that he has found difficult to come to terms with at times. It will be interesting to see what happens when Pierre Emerick-Aubameyang returns.

Did you know? Lacazette became the sixth Frenchman to score 50 Premier League goals for a single club, with four of the six doing so for Arsenal (also Thierry Henry, Olivier Giroud and Robert Pires).

The Crooks of the Matter:

This really can’t go on. VAR is turning the game into a farce. This weekend we had a number of extraordinary moments involving contentious offside decisions determined by VAR at Craven Cottage, Anfield, the London Stadium and the Hawthorns, leaving players, pundits and managers completely confused. The worst decision of all had to be the disallowed goal at Liverpool when Diogo Jota was judged to have been offside when VAR, at least to the naked eye, seemed to indicate otherwise.

I sat in the Final Score studio and watched the yellow and red lines of this super-duper technology appear on my screen explaining how the officials operating VAR had come to their conclusions. I was convinced we were all seeing the same lines on the screen showing Jota was definitely onside, only to be told otherwise by VAR moments later. So what are officials privy to at Stockley Park that the viewers are not? And, more to the point, shouldn’t we be? If you are going to show pictures on a public screen shouldn’t they be compatible with the decision given at Stockley Park?

The whole point of VAR is to provide conclusive evidence that the decision made is right. No equivocation, no dispute. What we are getting is confusion and doubt. What is also clear is that the technology in some cases is struggling, as demonstrated by West Brom’s disallowed goal in the first half against Southampton. The Premier League is the best league in the world and not the place to be conducting what has become a pilot scheme.

Queen and Prince Philip to celebrate Christmas ‘quietly’ at Windsor

I’m carrying wipe-clean Birkenstock sandals and buckling underneath a rucksack that accommodates a weekend’s price of...