Manchester City were made to wait to be crowned Premier League champions after losing 2-1 at home to Chelsea, with neighbours Manchester United winning 3-1 at Aston Villa.

Liverpool stepped up their chase for a top-four finish with a 2-0 victory over Southampton, as Newcastle recorded a 4-2 win at Leicester and Everton won 1-0 at West Ham. 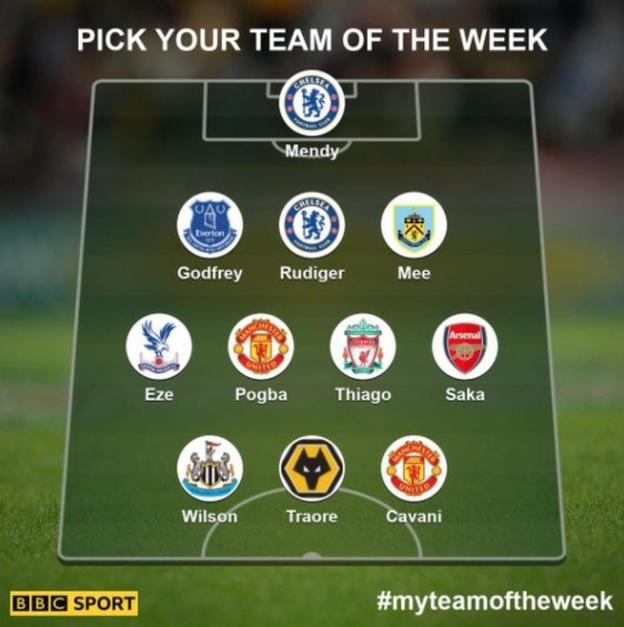 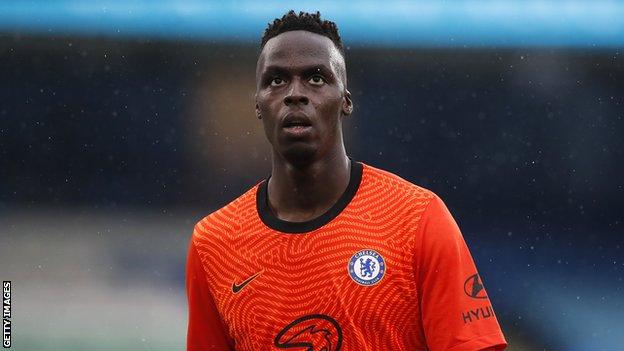 If you are going to go for the Panenka penalty then I strongly suggest you don’t do it against a goalkeeper who is 6ft 4in.

Edouard Mendy, who is getting better with every game, went to his right but due to his wing span put his arm down to correct his movement and was practically upright.

He stood up so fast he was practically waiting Sergio Aguero’s penalty kick to drop into his arms. I think the only reason Mendy didn’t burst out laughing was out of respect for the Argentine who looked as if he was in shock. Quite what possessed Aguero to attempt such an act of undiluted selfishness when you know what’s at stake, I will never know. It’s not what great teams are made of. Meanwhile Chelsea’s and Mendy’s great form continues.

Did you know? Of Premier League goalkeepers to play 20+ games this season in the competition, only Ederson (122) has posted a better minutes per goal conceded rate than Mendy (113). 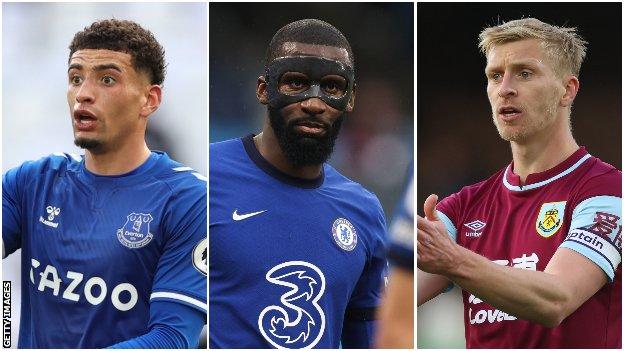 Ben Godfrey: This was an impressive display by Everton at London Stadium and the feature of their game was their defending. Ben Godfrey in particular was impressive.

The defender has made something of a name for himself due to his competitive nature but also has an eye for a pass as he showed, sending Dominic Calvert-Lewin on his way to an excellent finish. The ball was brilliant.

This lad has grown into a proper Premier League defender. I also got the impression that Godfrey was not afraid to take charge of Everton’s defensive responsibilities when Yerry Mina went off through injury.

Did you know? Godfrey registered just his second-ever Premier League assist in 57 appearances, with the defender also making a game-high five tackles.

Antonio Rudiger: His performance against Real Madrid in midweek was outstanding. I have often said, the no-nonsense German international is the best defender in the club and his performances this season have proved it.

I don’t know what took place between Frank Lampard and Rudiger during the early part of the season, when the German was left out for no apparent reason, but it seems to have cost Lampard dearly. Rudiger is the one consistent Chelsea defender who seems to be holding it all together for them at the moment.

At 36, Thiago Silva is used sparingly, Cesar Azpilicueta comes in and out and so does Kurt Zouma, while Andreas Christensen is out injured. That leaves Rudiger and I wouldn’t mess with him.

Did you know? Chelsea have won 59% of the 17 Premier League games this season where Rudiger has appeared, compared to 44% when the German hasn’t played (18 appearances).

Ben Mee: It’s over. They fought bravely but fighting bravely was never enough for Fulham or Scott Parker to survive in the Premier League. Wins at Leicester, Anfield and Goodison gave them hope but that was all.

Burnley on the other hand have done it again. Chris Wood and Ashley Westwood were the players who produced the goals for the Clarets against Fulham but Ben Mee’s partnership with James Tarkowski has been immense and one of the main reasons Burnley have survived another season in the Premier League.

Did you know? Mee helped Burnley to their 10th clean sheet of the season against Fulham. 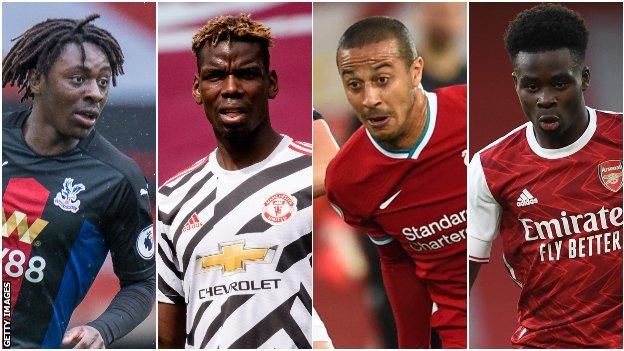 Eberechi Eze: Why are we not seeing this lad scoring more goals? He looks terrific on the ball and glides past players. If Crystal Palace can squeeze more finishes out of Eberechi Eze next season then I think they have a real player on their hands.

There’s no doubting his technical ability but a player with this sort of talent should be getting double figures quite comfortably. If he can start producing those sorts of returns and Palace are much higher up the table, the player starts pushing on senior international doors.

Did you know? Only Wilfried Zaha (12) has been directly involved in more Premier League goals for Crystal Palace this season than Eze, who has scored four and made five assists.

Paul Pogba: Why am I not surprised? Paul Pogba playing for Manchester United at the business end of the season. It’s not like him to miss a party.

Harry Maguire, Bruno Fernandes and Marcus Rashford have been ever-present for Manchester United and kept the ship afloat while Pogba was fixing his hair. The French star made the occasional contribution and even got in to my team of the week on occasions with some wonderful performances. I feel loathed to select him on this occasion but with a performance like this against Aston Villa what can I do?

Did you know? No Manchester United player challenged for more duels than Pogba against Aston Villa (12), with the Frenchman also mustering two shots and creating two chances for teammates.

Thiago Alcantara: This is the first time I’ve seen Thiago Alcantara really play well for Liverpool. I don’t think it has been easy for the former Bayern Munich star to settle in at Anfield.

The Spain international took his goal very well and played with an authority I haven’t seen before. Granted, it’s been a difficult season for the Reds especially without their fans. With four games left to play and a Champions League spot up for grabs I can’t tell whether Liverpool have what it takes to make up the six-point gap at such a late stage in the season.

Mohamed Salah only seems interested in the Golden Boot and I think that is having a negative effect on some of his teammates.

Did you know? Thiago became the 140th player to score a Premier League goal for Liverpool, and the first to score his first goal from outside the box since Divock Origi in December 2015.

Bukayo Saka: Regular readers will know what I think of this lad. If Manchester United or Liverpool don’t get their hand in their pockets and buy him there is something seriously wrong with them.

Bukayo Saka has been outstanding for Arsenal all season. He was their only shining light against Villarreal on Thursday night and his performance against West Brom days later was devastating. Everybody is talking about Manchester City’s Phil Foden, this lad is just as good if not better.

Did you know? Saka’s assist for Emile Smith Rowe’s opening goal was his 19th for Arsenal since making his debut in November 2018, more than any other player at the club. 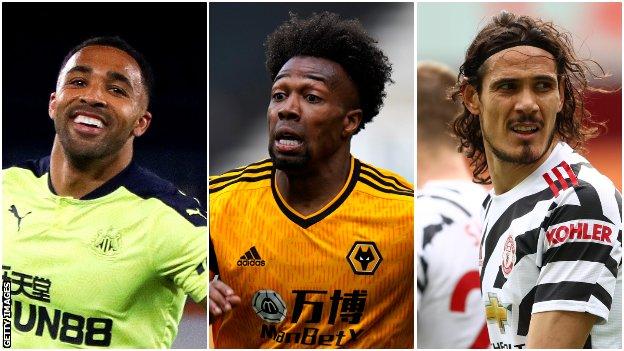 Callum Wilson: What a performance by Newcastle. The only question one needs to ask is why did Steve Bruce have to wait so long to see it? The injury to Leicester’s Jonny Evans certainly made a difference. Nevertheless the Magpies took Leicester apart from the word go.

As for Callum Wilson, well he was electric. Two brilliantly taken goals gave Newcastle a 4-0 lead and now they can look forward to a very cushy summer. However I’m not entirely sure where Bruce goes from here. Newcastle fans will want more than 14th place especially when they see West Ham are pushing for a Champions League spot.

Did you know? All 12 of Wilson’s Premier League goals for Newcastle have been scored in the second half, while he’s the first Magpies player to score 12 in his debut top-flight season for the club since Loic Remy scored 14 in 2013-14.

Adama Traore: Timo Werner was in my team of the week on Saturday night. By Sunday afternoon Adama Traore was in, having come off the bench for Wolves to crush any hopes Brighton had of leaving with a point with a display of explosive pace and power.

I am at a loss as to why this player has not brought a level of consistency to his game at this stage in his career that would see him scoring more goals and starting more frequently.

As for Brighton, I’m equally confused. Manager Graham Potter is known for his leadership qualities. Which is why I cannot understand, why not just one but two of his players were unable to keep their composure when it mattered and were sent off. It cost Brighton the match and the suspension of their captain and leading goalscorer. What is he telling his players?

Edinson Cavani: A lot was made of the movement and the finish by Edinson Cavani against Aston Villa but I quite like the ball from Marcus Rashford as well. Both men are constantly looking for each other and are on the same wave length in a way that Anthony Martial is not.

Manchester United have convinced the Uruguayan to stay at Old Trafford for another season. This is a major achievement for Ole Gunnar Solskjaer and will save him a fortune in the transfer market. It won’t do the attacking prowess of Rashford and the extraordinary talented Mason Greenwood any harm either. Buy a decent centre-half and United have a squad fit for a Premier League title.

Did you know? Cavani netted his fifth Premier League goal as a substitute this season, matching the record in a single season for Manchester United, alongside Solskjaer in 1998-99 and Javier Hernandez in 2010-11.

The Crooks of the Matter:

I was delighted to see the way Hertha Berlin dealt with former Arsenal and Germany keeper Jens Lehmann who was sacked from his role on the board after sending a WhatsApp message to pundit Dennis Aogo calling him a “quota black guy”.

Aogo, who works for Sky in Germany, posted a screenshot of the message from Lehmann on Instagram and wrote: “Wow you’re serious? The message was probably not for me.”

Well you can understand Aogo’s alarm at the suggestion. He played for Hamburg and Stuttgart among others and earned 12 caps for Germany. If he can’t have an opinion on the way the game is played in the Bundesliga then who can?

Lehman apologised when he realised the gravity of his gaffe, by stating he actually thought the ex-Germany defender was “very knowledgeable”. How pathetic!

Tennor Holding, the investment group that Lehmann represented on the supervisory board of Bundesliga club Hertha, were having none of it and terminated the 51-year-old’s contract with immediate effect. Well done Tennor Holding.

How refreshing to see a company stand its ground, after not being convinced by Lehman’s attempted swerve to try and change tack.

Of course there will always be people who will take great comfort from elevating themselves at the expense of others. It’s just so disappointing when it’s from those who should know better. It’s bad enough when some mindless moron abuses a well-known figure but Lehmann had played in the same teams as Thierry Henry, Sol Campbell, Emmanuel Eboue, Ashley Cole and Kolo Toure, just to mention a few. Were they ‘quota black guys’ too?