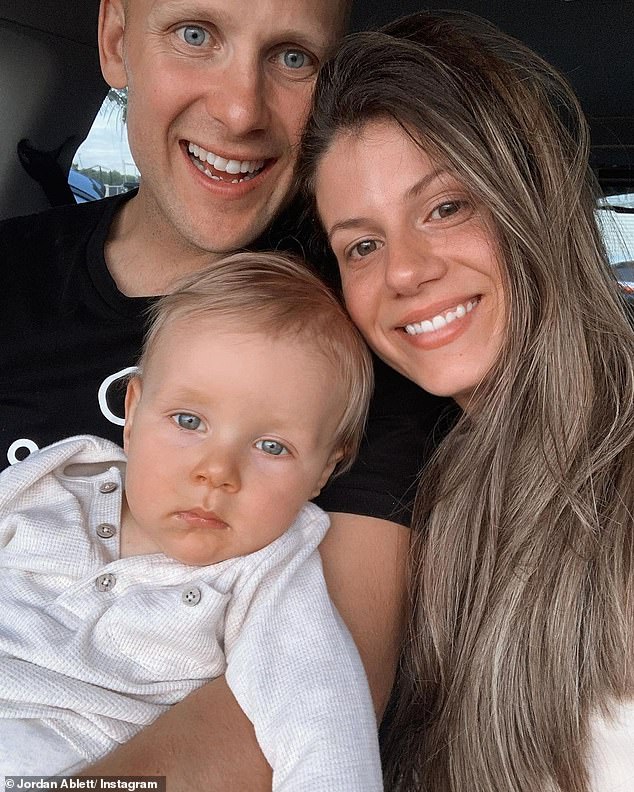 The wife of AFL star Gary Ablett has described the footballer as her ‘rock’ after a year of heartache that saw her mother die and her son diagnosed with a crippling illness.

The 28-year-old’s mother Trudy Papalia lost her battle with lung cancer in August 2020, just a month after her two-year-old son Levi was diagnosed with a rare degenerative disorder.

Mrs Ablett said the loss of her mother ‘still hurts’, but the former Geelong Cats captain ‘plays an enormous role in keeping me strong’.

Levi with his grandmother, Jordan’s mother Trudy Papalia before she died of lung cancer

‘He is truly my rock. He is so stable, so optimistic, so supportive and so encouraging of me,’ she told the Herald Sun.

‘I try and focus on the things that I can do to continue to be the kind of mum for Levi that my mum was to me.’

The following month saw the sports star close the door on his 357-game AFL career after a crushing loss to Richmond in the grand final match.

Ablett, 36, pulled the plug on his football career in November after a shoulder injury to focus on his health and family.

Jordan Ablett said her son Levi is a happy and determined child, and she loves being his parent

Despite Levi’s illness, which had him admitted to hospital on multiple occasions, Mrs Ablett said the couple loved being parents to their ‘smiley’ and ‘determined’ son.

The mother-of-one said having her husband home was ‘a beautiful thing’ and they were able to spend more time with friends and family without having to factor in football.

She also revealed the secret to their strong relationship in the face of tragedy was making time for regular ‘date nights’.

‘We try and do a date night once a week because we do believe it’s really important to intentionally set aside time for one another given how busy life can be,’ Mrs Ablett said.

Pictured: Gary Ablett being tackled during the round one AFL match between the Melbourne Demons and the Geelong Cats at Melbourne Cricket Ground on March 25, 2018

In an Instagram post, Mrs Ablett said the couple made the decision to share their son’s journey online after realising he was a shining light for others

Their most recent date night was on Friday when the couple attended the Australian Open as guests of Champagne house Piper-Heidsieck.

Last week, the mother admitted on Instagram that she was adamant she would never put photos of her children online.

But on Monday, she said they changed their mind after realising their son had the ability to make other people’s lives brighter.

Despite fearing social media, the proud mother explained she never wanted to ‘hide Levi’s light from the world’.

‘When we revealed Levi’s diagnosis back in July, we were (and still are) overwhelmingly inundated with an incredible amount of people sharing their own stories and very personal challenges with us,’ she wrote.

AFL star Gary Ablett’s wife Jordan Ablett announced her mum Trudy (pictured, with their son Levi) died surrounded by loved ones after a battle with cancer

‘Even those who don’t have children with special needs reach out and tell us how they await to see a photo of Levi and his big smile as it truly brightens their day.’

‘We know Levi is a light in this world which is why we chose to put aside our fears of being active on social media and instead focus on the kind of impact that we know Levi’s life can have on others.

Mrs Ablett also became an ambassador for the My Room Children’s Cancer Charity, after mothering baby Levi inspired her to help others going through similar circumstances.

Following the death of her mother last year, Mrs Ablett penned an emotional tribute on Instagram.

‘It is with great sadness we share that on Sunday night our precious mum and Nanna, Trudy, went peacefully to be with the Lord, surrounded by her loving family,’ she wrote.

‘Thank you for your messages of love, care, and support – we are very grateful.’

Foot-and-mouth outbreak: Looking back at the crisis after 20 years

Foot-and-mouth outbreak: Looking back at the crisis after 20 years