Gavin Williamson has been mocked on social media by Marcus Rashford after he claimed to have met the footballer on a Zoom call – when he had actually chatted with rugby star Maro Itoje.

The Education Secretary, 45, who is understood to be facing the prospect of being replaced in the Prime Minister’s next Cabinet reshuffle, made the blunder in an interview with the Evening Standard published today.

While discussing some of his most ardent critics, Williamson claimed to have met ‘engaged, compassionate and charming’ England and Manchester United player Rashford via Zoom. The footballer has previously written to the Education Secretary as part of his campaign to tackle child food poverty.

However, later in the interview, a spokesperson for Williamson explained that he had actually met 6ft 4in Saracens rugby star Maro Itoje, rather than the 5ft 9in Rashford.

Manchester United star Rashford led widespread ridicule of the Education Secretary, tweeting a crying face emoji and joking: ‘Accent could have been a giveaway.’

The rugby star also mocked Williamson’s gaffe, tweeting: ‘Due to recent speculation I thought it was necessary to confirm that I am not Marcus Rashford… And whilst we are here my name is not Mario either!! Just a simple Maro Itoje will do…Much love, Marcu… I mean Maro Itoje.’

In a statement this afternoon, Williamson defended himself, saying: ‘Towards the end of a wide-ranging interview in which I talked about both the laptops and school meals campaigns, I conflated the issues and made a genuine mistake. We corrected this with the journalist before publication of the story.

‘I have huge respect for both Marcus Rashford and Maro Itoje who run effective and inspiring campaigns.’

In the interview, he also spoke about a portrait of the Queen that he has on his windowsill.

He said: ‘That was a gift because there was a comment about how every other office had a picture of the Queen. Matt Hancock has her in a big circle… I do think we could get a more flattering one.’

‘Obviously every picture of the Queen is absolutely stunning but I’ve seen better than that.’ 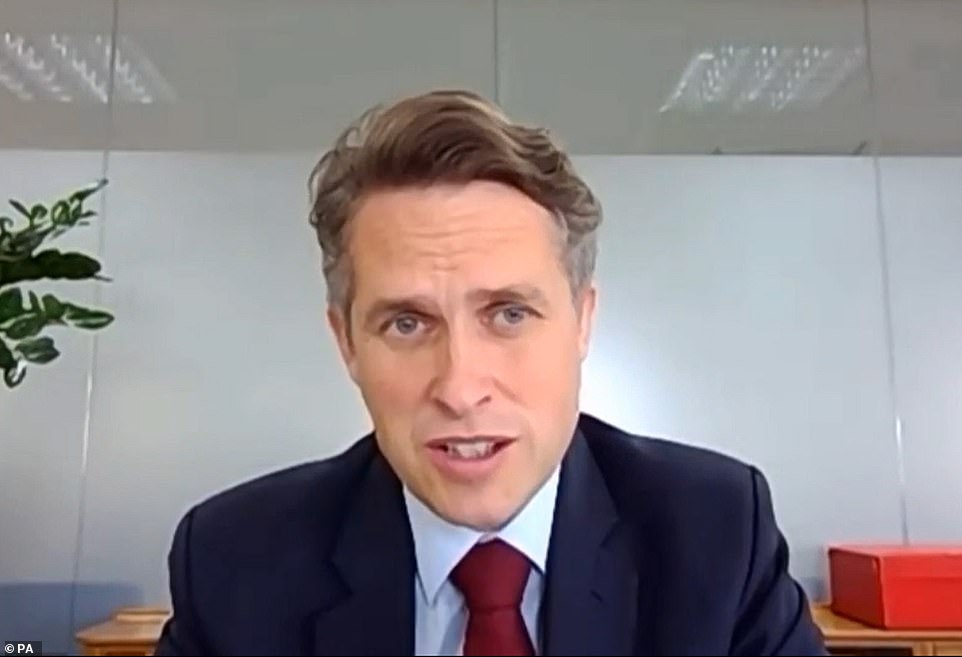 While discussing some of his most ardent critics with Susannah Butter, Gavin Williamson claimed to have met ‘engaged, compassionate and charming’ Marcus Rashford via Zoom 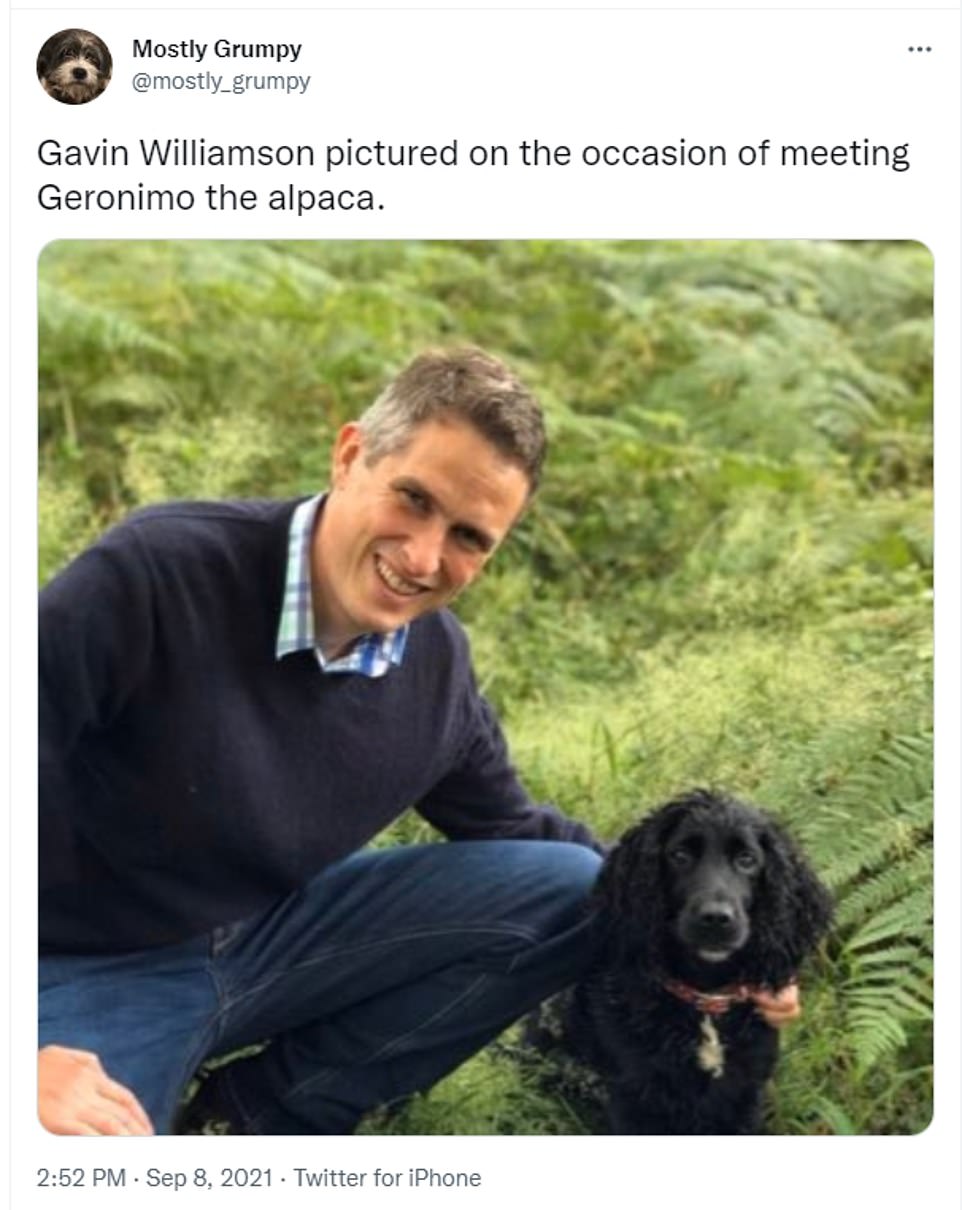 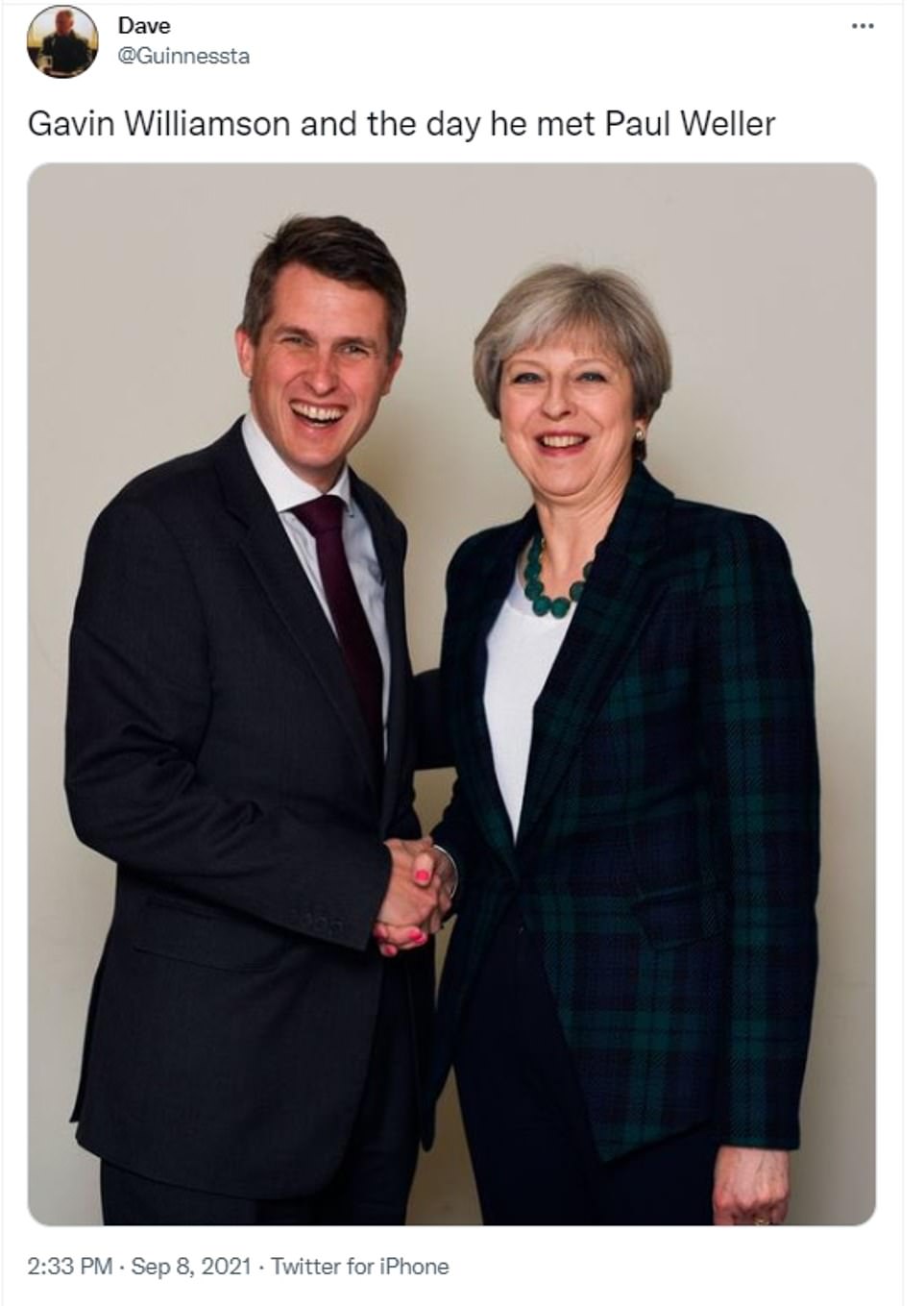 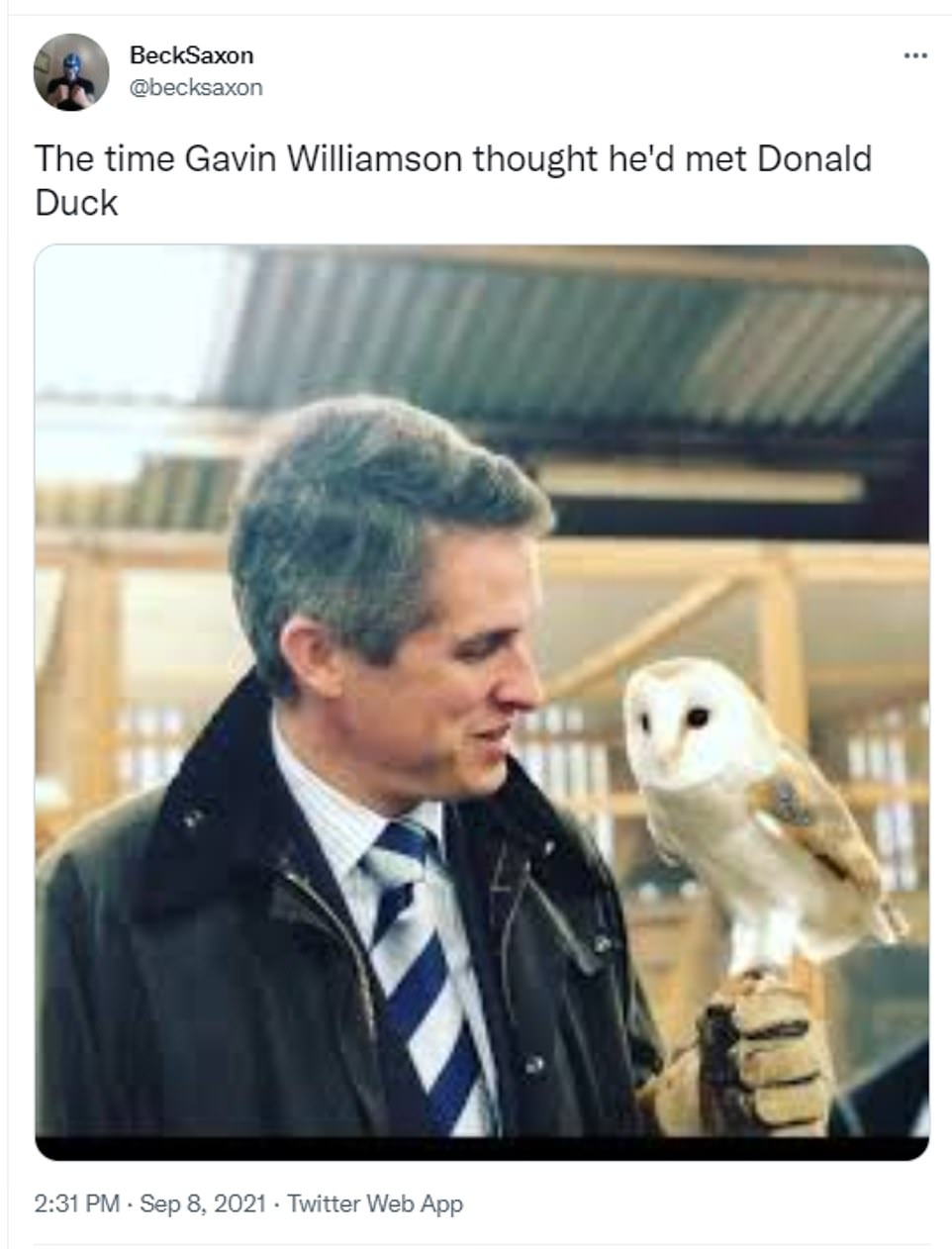 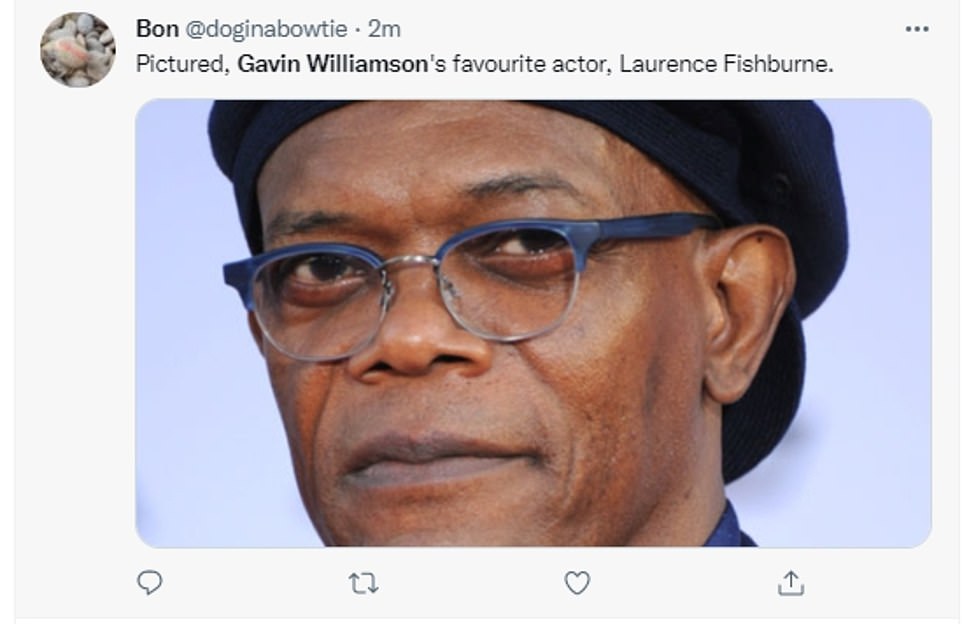 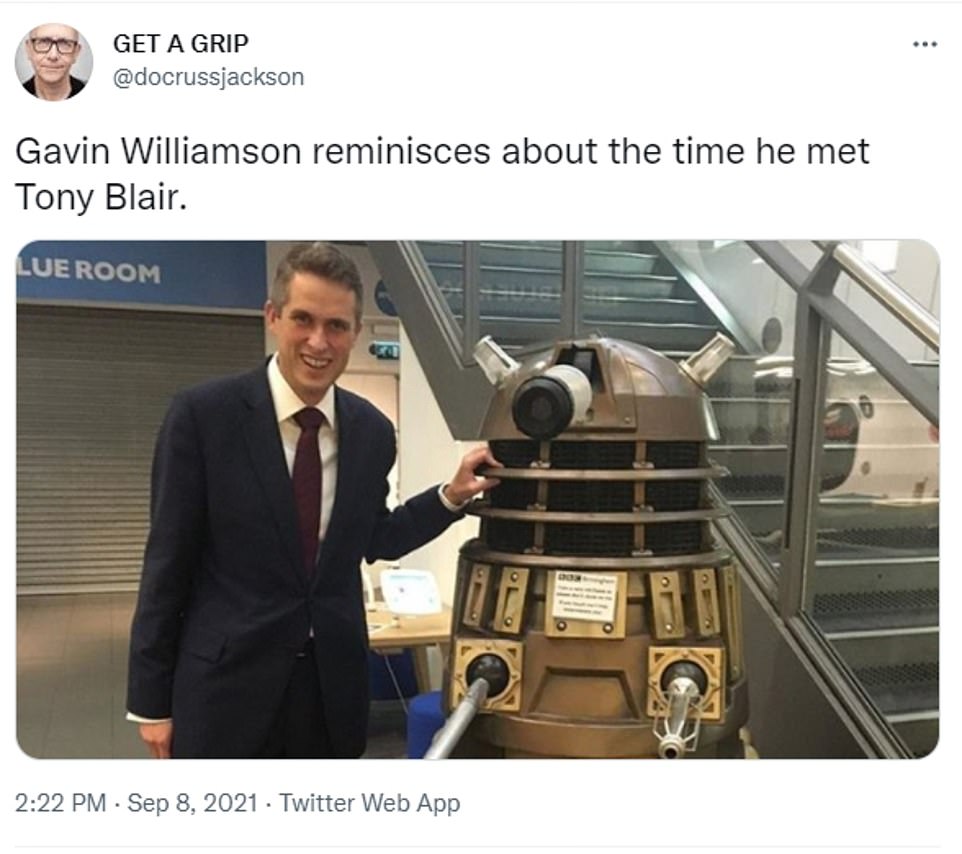 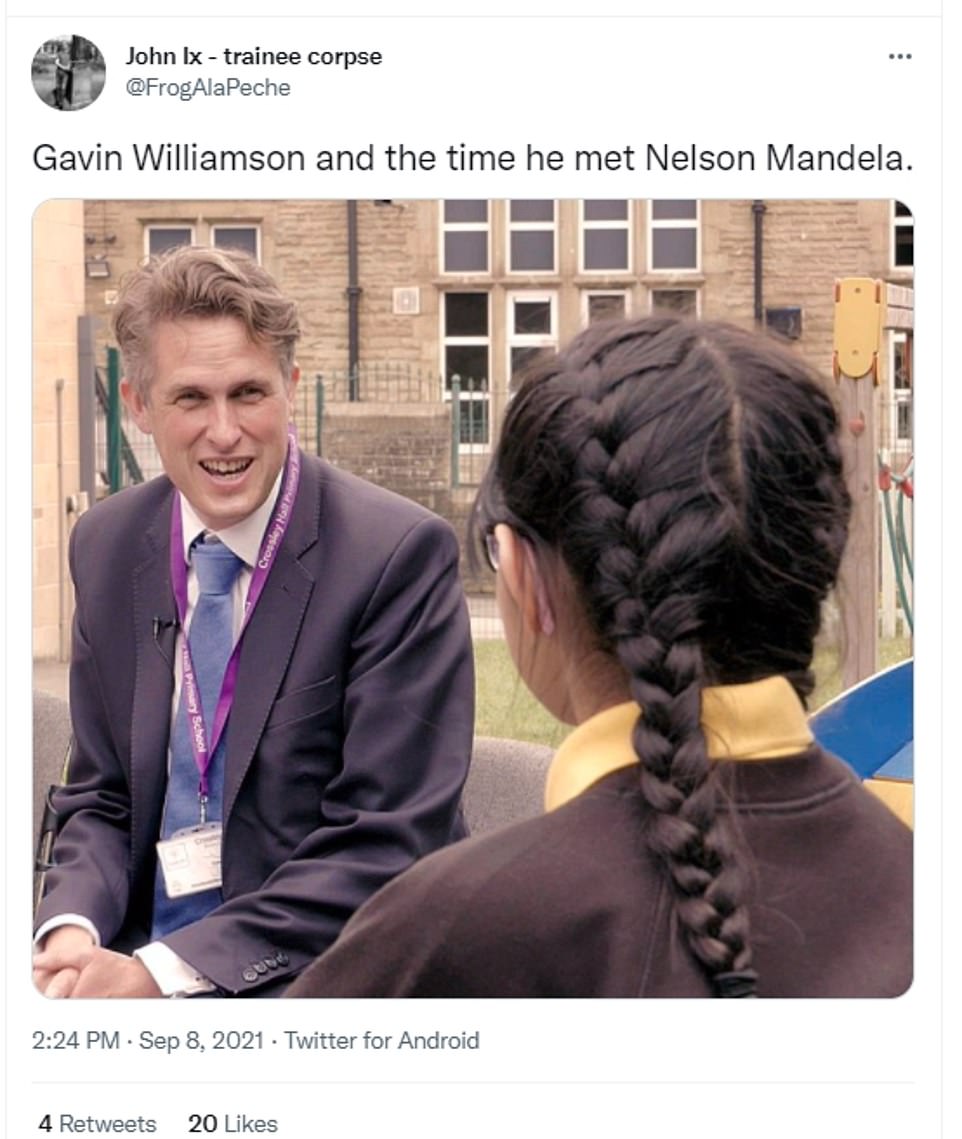 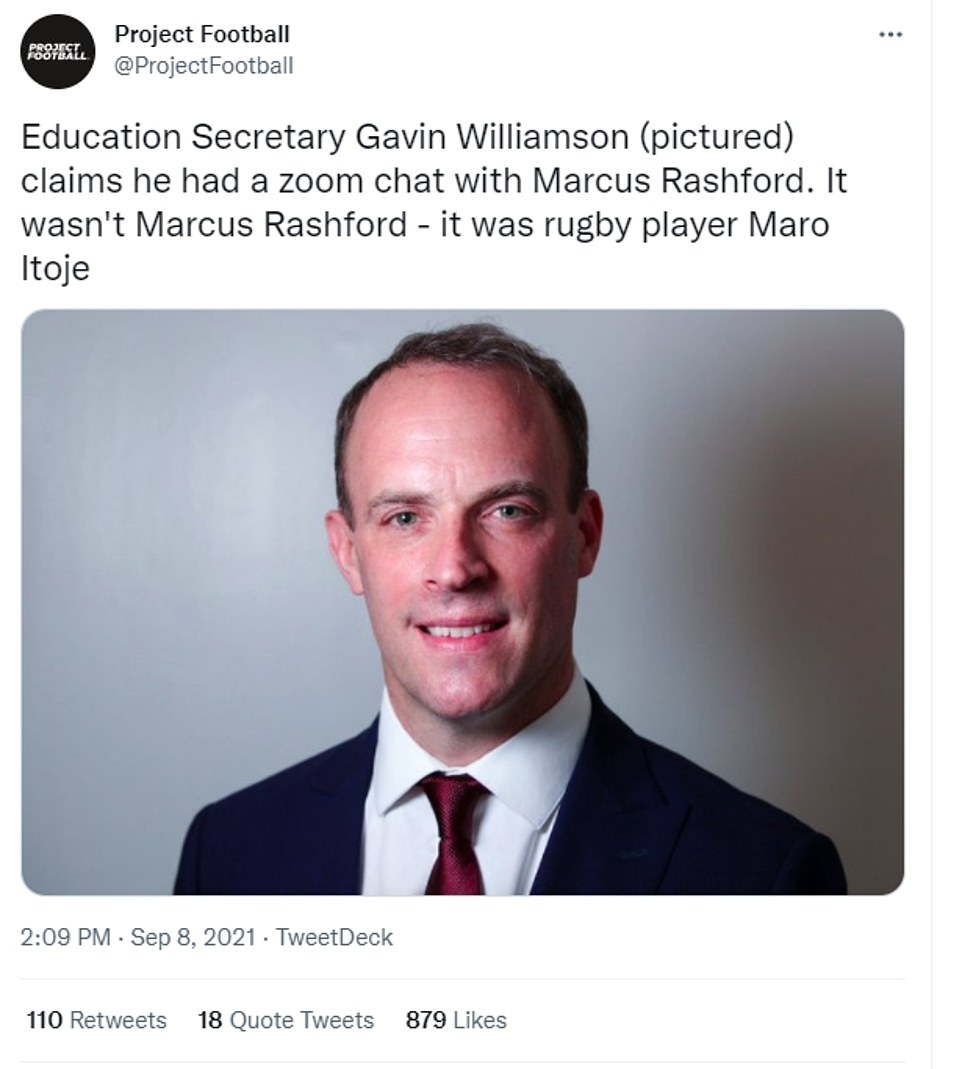 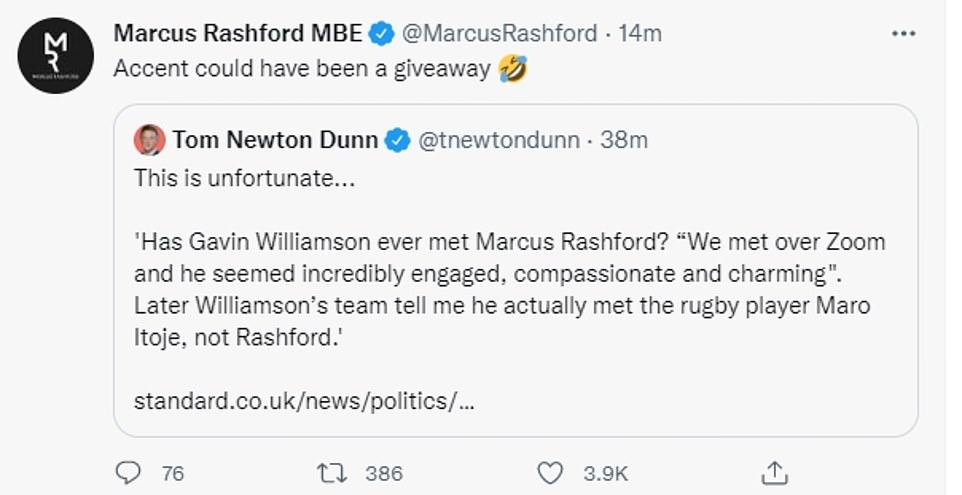 Reacting to the story with a crying laughing emoji, Rashford tweeted: ‘Accent could have been a giveaway’ 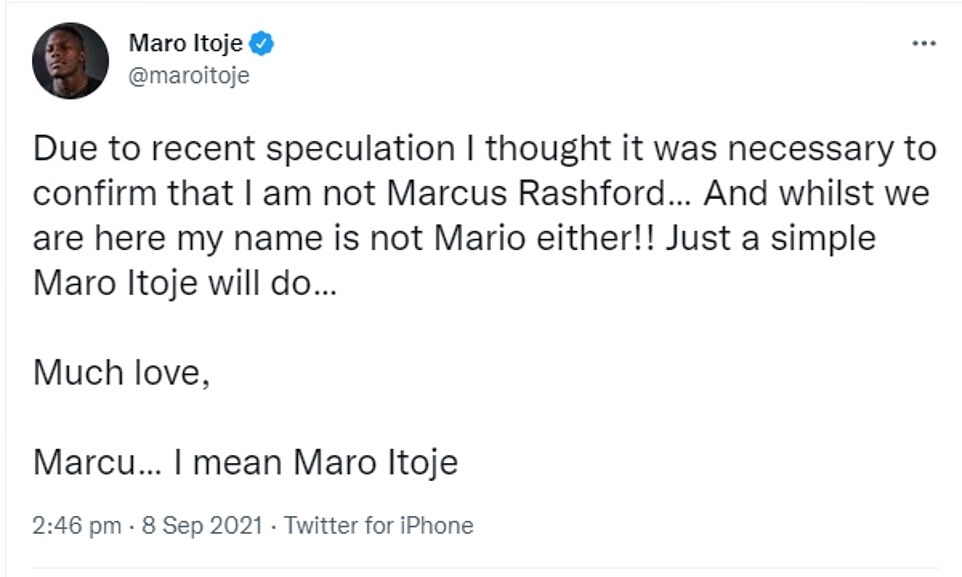 The footballer’s spokesperson told Sky News: ‘Marcus’s consistent ask to those in power has been collaboration.

‘More often than not this ask is rebuffed. Maro and Marcus are two incredibly successful young black men, but there is little more they have in common.

‘Whether it’s Daniel Rashford or a Maro Itoje reference, the message remains the same. Put our children first.’

Mr Williamson told the Standard‘s Susannah Butler: ‘We met over Zoom and he seemed incredibly engaged, compassionate and charming but then he had to shoot off.

‘I didn’t want to be the one that was holding him back from his training.’

A spokesperson for Rashford said the footballer had not had direct communication with the Education Secretary.

The footballer had been a vocal critic of Mr Williamson’s handling of the free school meals fiasco.

That discussion was likely centred around the efforts of Saracens and England star Maro Itoje, who had been campaigning to provide every student in the UK with equal access to education.

Titled the Digital Divide, Itoje and partners Bloomberg and Saracens Foundation worked to provide more than 2,000 laptops and tablets to school pupils in desperate need during the pandemic.

Itoje took to Twitter after news broke of Williamson’s mishap, saying: ‘Due to recent speculation I thought it was necessary to confirm that I am not Marcus Rashford… And whilst we are here my name is not Mario either!!

Shadow Justice Secretary David Lammy wrote on Twitter: ‘This is appalling. Gavin Williamson what was it about Maro Itoje that made you mistake him for Marcus Rashford?

‘You must be the most ignorant, clueless and incapable Education Secretary in the UK’s history.’

‘The fact that Gavin Williamson remains in his job is a daily reminder of how mediocre white men rise and rise.’

Actor and TV presenter Adil Ray said: ‘How do you know if you’ve met Marcus Rashford or not? ‘Oh he’s black, yes I met one once’. It’s an insult.

‘He should know Marcus inside out, the man who fed kids he tries to educate. He should want to meet him.’ 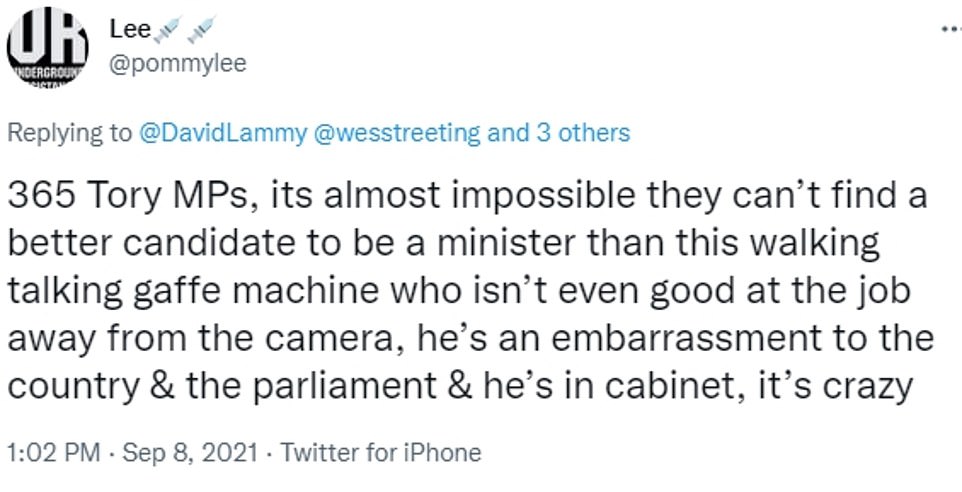 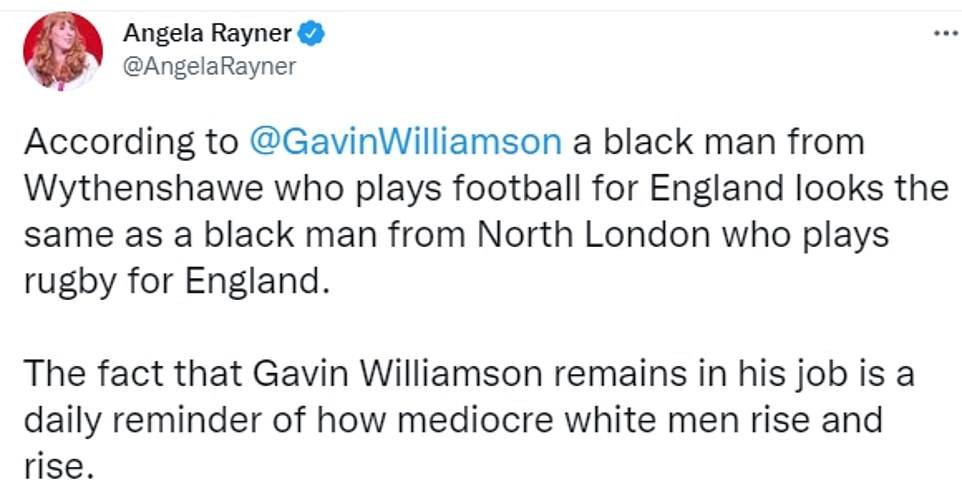 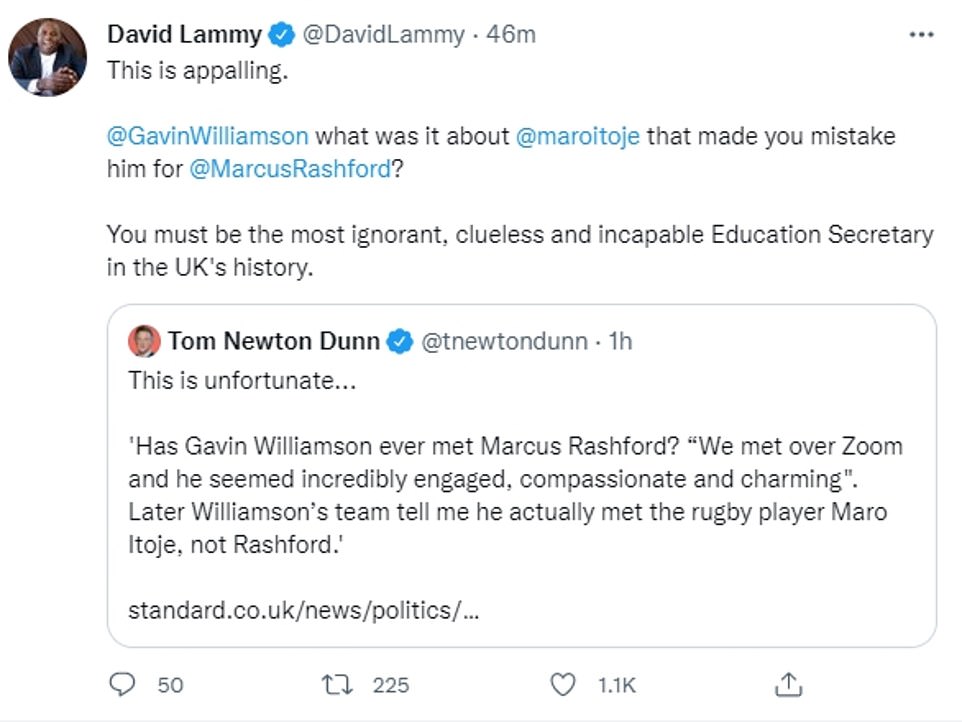 Others slammed the beleaguered Education Secretary, with some describing him as ‘racist’ while others said he was an ’embarrassment to the country’.

Journalist Andrew Quinn wrote: ‘He has to be one of the worst politicians the world has ever known!!!’

The news comes as Manchester United star Marcus Rashford calls on people to petition their MP to back ending the ‘child hunger pandemic’.

The England footballer said that ‘devastatingly’ child food poverty is getting worse instead of better.

The three recommendations Rashford is supporting are from the national food strategy developed by the Government’s food tsar, Henry Dimbleby.

They include expanding free school meal eligibility, providing long-term funding for the holiday activities and food programme and increasing eligibility, and expanding eligibility for the healthy start scheme which provides vouchers for milk, fruit and vegetables. 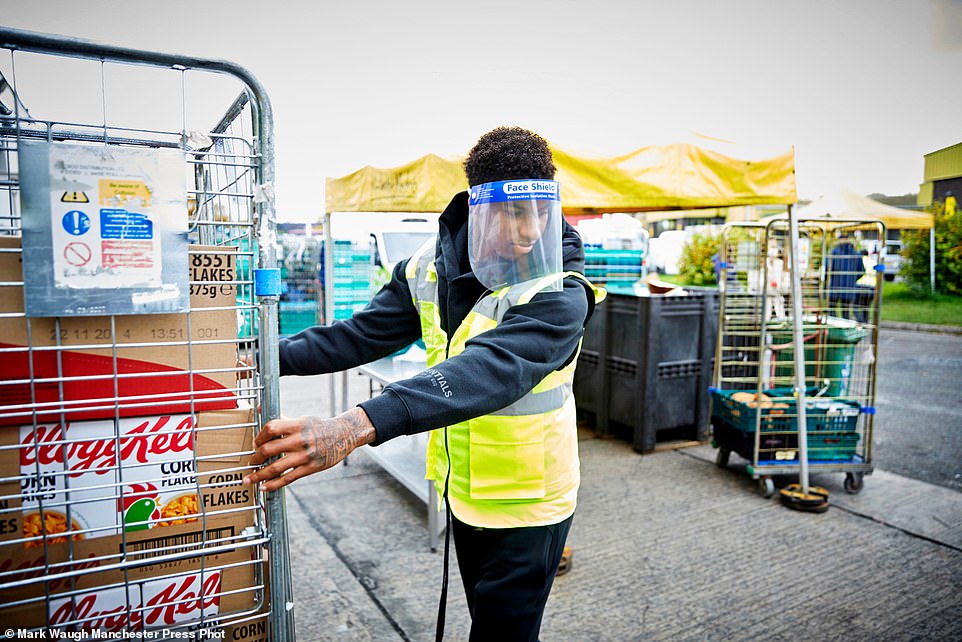 Rashford, 23, said: ‘We should be focusing efforts on developing a sustainable long-term roadmap out of this child hunger pandemic.

‘I hope that we see the required investment pledged during the Autumn Spending Review. I will be writing to my MP about it, and I would encourage you all to do the same.’

The footballer’s latest efforts follow his successful campaign to persuade the Government to provide free meals to vulnerable youngsters in England during school holidays during the pandemic.

Last month, Gavin Williamson faced huge political pressure after being accused of ruining the credibility of A-levels by ‘baking in’ soaring grade inflation and allowing a growing results gap between private and state schools.

He was said to be ‘wetting himself’ over reports that Boris Johnson is lining up his ‘anti-woke’ Equalities Minister Kemi Badenoch to replace him in the Cabinet.