Gavin Williamson today piled pressure on the Government’s vaccine advisory panel to sign off on plans to vaccinate children against Covid.

During a round of interviews this morning, the Education Secretary said he ‘very much hoped’ that the group would come down in favour of jabbing youngsters aged 12 to 15.

He suggested that the delayed decision was making parents anxious about sending their children back to classrooms this week after the summer break.

‘I think parents would find it deeply reassuring to have a choice of whether their children should have a vaccine or not,’ he told BBC Breakfast.

The Joint Committee on Vaccination and Immunisation (JCVI) — an independent body which advises No10 on Covid jabs — is still weighing up the risks and benefits of vaccinating children.

In guidance published in July, the group said the small risk of heart inflammation from vaccines outweighed the vanishingly small threat coronavirus poses to them.

It was also not convinced that vaccinating children solely to protect adults justified the move and raised doubts about the true prevalence of long Covid in youngsters.

But pressure has been mounting on the JCVI to green light the move after Covid cases skyrocketed in Scotland when classes went back after the summer break in mid-August.

There are fears of a similar big bang in cases now that schools across the rest of the UK have started to restart. The country is already recording 35,000 infections each day and hospitalisations are creeping up.

But Professor Anthony Harnden, one of the chief scientists on the JCVI, said today the group would do what’s best for children ‘no matter what other people outside the committee think’.

A member of the Scientific Advisory Group for Emergencies (SAGE) suggested giving children one dose of Covid vaccine because heart complications are more common following the second injection. 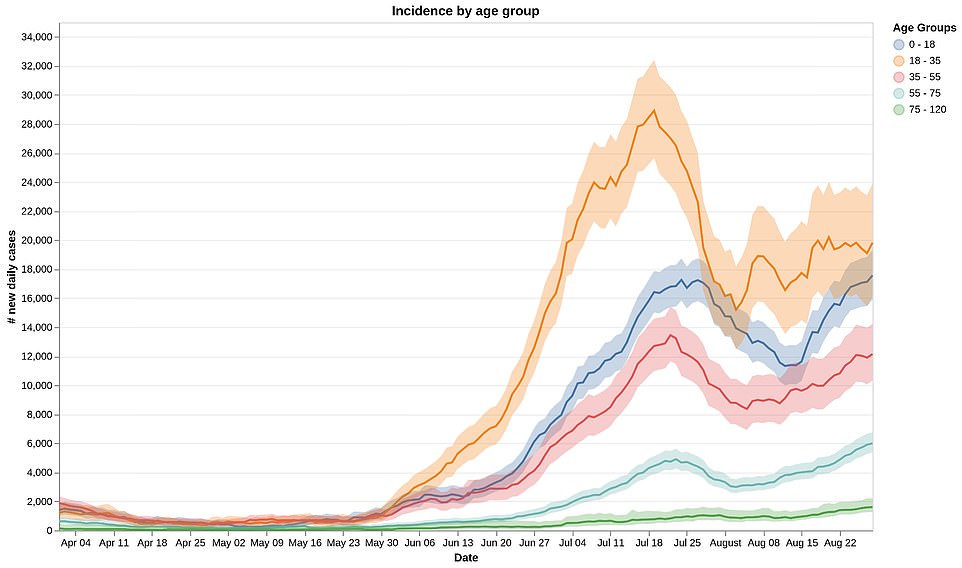 Latest estimates from a symptom-tracking app suggested under-18s had the second highest number of Covid cases in the country (blue line). Only 18 to 35-year-olds had a higher number of Covid cases (orange line). That is despite schools in England, Wales and Northern Ireland only starting to go back this week. The data is from the ZOE Covid Symptom Study 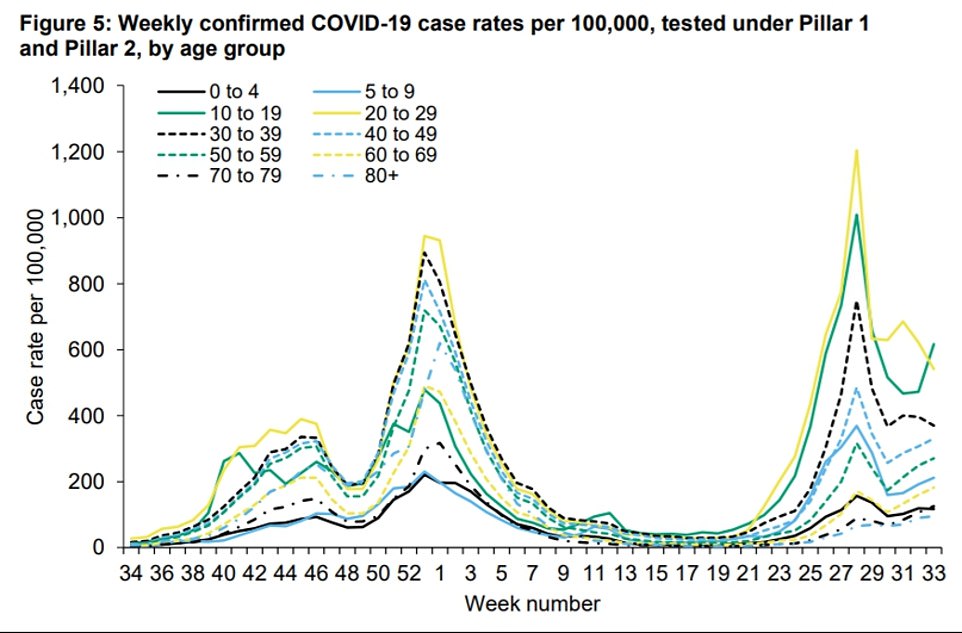 Latest Public Health England data showed Covid cases are rising fastest among 10 to 19-year-olds (grey line) and 20 to 29-year-olds (green line). Approving Covid vaccines for 12 to 15-year-olds would likely help curb the spread of the virus in the age group, scientists in favour of the move add

Speaking on BBC Breakfast, Mr Williamson made it clear he was in favour of vaccinating secondary school-aged children.

‘Probably a lot of us are very keen to hear that and very much hope that we’re in a position of being able to roll out vaccinations for those who are under the age of 16,’ he said.

‘I would certainly be hoping that it is a decision that will be made very, very soon.’

He added: ‘I think parents would find it deeply reassuring to have a choice of whether their children should have a vaccine or not. We obviously wait for the decision of JCVI.’

He said he could not give a timeline for when the decision is expected because the JCVI is a ‘completely independent committee’.

‘They’re not there to take instructions from the Government. They will reach a decision, I’m told and I understand, very, very soon.’

The Government has put added pressure on the JCVI for a decision by instructing the NHS to have the staff and logistics in place to start rolling the vaccines out in schools from this week — without their parent’s consent.

But Professor Harnden said the JCVI was committed to doing what is in children’s best interests, regardless of political pressure.

He told BBC Radio 4’s Today Programme: ‘There’s many, many arguments for and against giving vaccines to 12 to 15-year-olds, and we’re deliberating on what we think as a committee is best for children.

‘And that is the key thing: whatever we decide, we will do it in the children’s best interests no matter what other people outside the committee think. And we will come to a really, really strong decision about our advice.

‘Now of course it is up to ministers as I say to make decisions, it’s not up to JCVI, but we will give some very strong advice.

‘But there are very strong arguments for vaccinating 12 to 15-year-olds, and there’s some arguments against as well and it’s very finely balanced.’

Children have only a small risk of becoming seriously ill with Covid and a vanishingly small chance of death, while Pfizer and Moderna’s vaccines are associated with rare cases of myocarditis in young people.

Professor Calum Semple, who sits on the Scientific Advisory Group for Emergencies (SAGE) said deciding whether or not to vaccinate 12 to 15-year-olds is a ‘really tricky decision’.

He told BBC Breakfast: ‘We’ve got a really fine balancing act between a rare side effect – which is very, very rare, which is myocarditis – and the low risk (from Covid) to children themselves.

‘If however you take into the round the risks of impact on transmission to the wider society and disruption to school, so you take a broader view of the benefit of vaccination, that might shift the decision around vaccinating 12 to 15-year-olds, but that’s a really difficult judgment.’

Professor Calum Semple said he would opt for one dose of vaccine only for 12 to 15-year-olds, if it was up to him.

‘The professor of child health and outbreak medicine at the University of Liverpool said he is ‘glad’ he is not on the JCVI as ‘they are having a tough time of it’.

‘He told BBC Breakfast: ‘I would probably go for a single dose of the vaccine for 12 to 15-year-olds, as a one-off – in order to help public health generally, break transmission chains in society.

‘The rare side effect of myocarditis appears to be associated more with the second dose than the first dose.

‘So I would probably go down the path of giving one dose only, as a one-off, and then waiting until children are much older before we go for the double jab.’

WHAT ARE THE PROS AND CONS OF VACCINATING CHILDREN?

The main argument in favour of vaccinating children is in order to prevent them keeping the virus in circulation long enough for it to transmit back to adults.

Experts fear that unvaccinated children returning to classrooms in September could lead to a boom in cases among people in the age group, just as immunity from jabs dished out to older generations earlier in the year begins to wane.

This could trigger another wave of the virus if left unchecked, with infection spilling into older age groups and triggering more hospitalisations and deaths.

However, the rise of the Delta variant has blunted vaccines’ effect on blocking transmission which has raised further doubts.

While the risk of serious infection from Covid remains low in most children, scientists are still unsure of the long-term effects the virus may have on them.

Concerns have been raised in particular about the incidence of long Covid — the little understood condition when symptoms persist for many more weeks than normal — in youngsters.

A study by King’s College London showed fewer than two per cent of children who develop Covid symptoms continue to suffer with them for more than eight weeks.

Other studies have suggested up to half of children infected with Covid suffer from lingering symptoms months later — but they are thought to only be very mild.

Extremely rare incidences of a rare heart condition have been linked to the Pfizer vaccine in youngsters.

Data from the Centers for Disease Control and Protection (CDC) in the US — where 9million 12- to 17-year-olds have already been vaccinated — shows there is around a one in 14,500 to 18,000 chance of boys in the age group developing myocarditis after having their second vaccine dose.

Britain’s drug regulator the MHRA lists the rare heart condition as a very rare side-effect of the Pfizer and Moderna vaccines.

They said: ‘There have been very rare reports of myocarditis and pericarditis (the medical term for the condition) occurring after vaccination. These are typically mild cases and individuals tend to recover within a short time following standard treatment and rest.’

More than four times as many hospitalisations were prevented as there were cases of myocarditis caused by the vaccine in 12- to 17-year-olds, the health body’s data show.

Jabs should be given to other countries

Experts have also claimed it would be better to donate jabs intended for teenagers in the UK to other countries where huge swathes of the vulnerable population remain unvaccinated.

Not only would this be a moral move but it is in the UK’s own interest because the virus will remain a threat to Britain as long as it is rampant anywhere in the world.

Most countries across the globe are lagging significantly behind the UK in terms of their vaccine rollout, with countries in Africa, Southeast Asia and South America remaining particularly vulnerable.

Jabs could be better used vaccinating older people in those countries, and thus preventing the virus from continuing to circulate globally and mutate further, than the marginal gains to transmission Britain would see if children are vaccinated, experts argue.

Professor David Livermore, from the University of East Anglia, has said: ‘Limited vaccine supplies would be far better used in countries and regions with large vulnerable elderly populations who presently remain unvaccinated — Australia, much of South East Asia and Latin America, as well as Africa.’

What’s Awaited for Cardano’s Network, Will It Join Hands With Solana 2021