No sooner had the Challenge Cup been lifted high and the fireworks crackled than Leeds winner Mikolaj Oledzki was sharing the joy with family in Poland.

His country is hardly synonymous with a competition that dates back to the reign of Queen Victoria, but the whole Oledzki clan was transfixed by one of the most compelling finals Wembley has staged.

Leeds’ victory by a single point was sealed by captain Luke Gale’s drop goal four minutes from the end of a heart-pounding, knife-edge encounter. For the Headingley aristos, a 14th Cup triumph; for paupers Salford, the tag of oh-so gallant, unlucky losers. 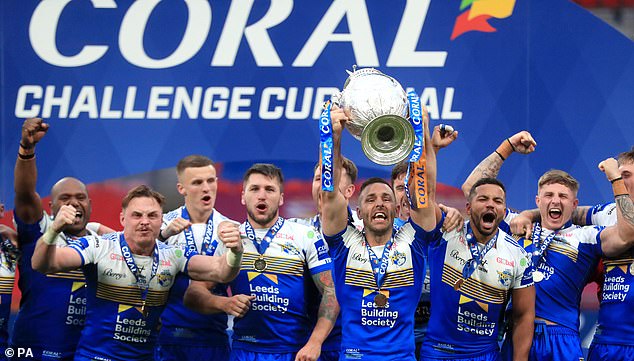 Oledzki was born in Gdansk and represented his native country in diving before his family moved to England in search of gold paving — Corby and then Leeds. Encouraged by his father, Sebastian, he joined the Rhinos on a scholarship at 15 and made a try-winning debut at 18.

Now 22, the prop forward was celebrating his greatest achievement. ‘As soon as I rang my family I had tears in my eyes,’ he said. ‘For a kid from Poland it doesn’t seem real. My grandad managed to work his laptop in Poland and get the game on the screen. My uncles and everyone did the same. I’m sure they were cheering me on all the way.’

It was more than could be said of the atmosphere inside Wembley. Due to Covid no spectators were permitted. Only the odd chain-clad mayor and the media, and not many others.

In front of the empty red seats, a cracker of a game unfolded. Leeds went into the half-time break 12-6 up, only to lose their composure and advantage to two tries in a four-minute burst through Pauli Pauli and James Greenwood. 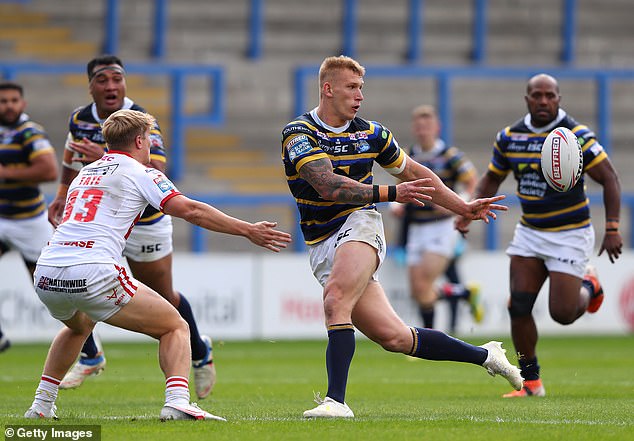 It gave the underdogs – renowned to-the-death scrappers – a four-point lead with a quarter of an hour left.

But Leeds dug deep. Lance Todd Trophy man-of-the-match winner Richie Myler was again to the fore as has he had been all afternoon. He was a running textbook of creativity and handling, having been switched so successfully from the halves to full back by coach Richard Agar.

And for a second time, Myler brilliantly sent Ash Handley over the line. That made it 16-16 as the sand ran out of the timer.

Referee Liam Moore adjudged that Pauli had used the ball to get himself back up. The ruling provided Gale with his chance and he duly produced the conclusive stroke of his right boot.

Emotion tugged at the winners. First, there was the drop-kick hero wearing the No 7 shirt of club legend Rob Burrow, who was guest of honour in absentia as he fights motor neurone disease. 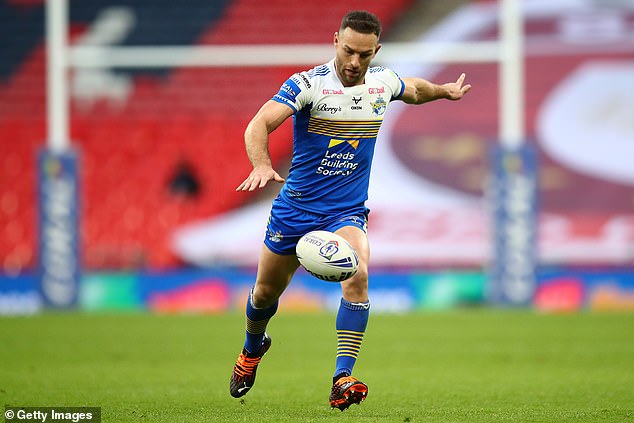 And for winger Handley, the memory of his old academy pal, James Brook, who died of cancer five years ago.

‘It’s for my family and my dear friend who passed away,’ said Handley.

‘He was in the scholarship with me and died when we were 18 or 19. I did it for him and his family.’

Salford coach Ian Watson has seen his team compete in two major finals in just over a year — they also lost to St Helens in the last Super League Grand Final — despite operating on a tight budget.

‘It shows the club and the team are moving in the right place,’ he said. ‘The players and staff are absolutely devastated we’ve not been able to win, but it is a sign of how far we’ve come over the last few years. We’ll keep building.’