Gentoo penguins should be considered four different species due to the way they have adapted to live in different environments, according to scientists.

Experts from the University of Bath analysed the genetic and physical difference between Gentoo penguin populations around the southern hemisphere.

They say that counting the birds as four separate full species will help their conservation, as it will be easier to monitor any decline in numbers in any area.

Gentoo penguins, Latin name Pygoscelis papua, live in a range of latitudes in the southern hemisphere and are currently split into two subspecies.

However, over hundreds of thousands of years of living in distinct colonies without interbreeding, the birds have gradually developed physical changes – invisible to the untrained eye – that make them four, clearly distinct full species, experts claim. 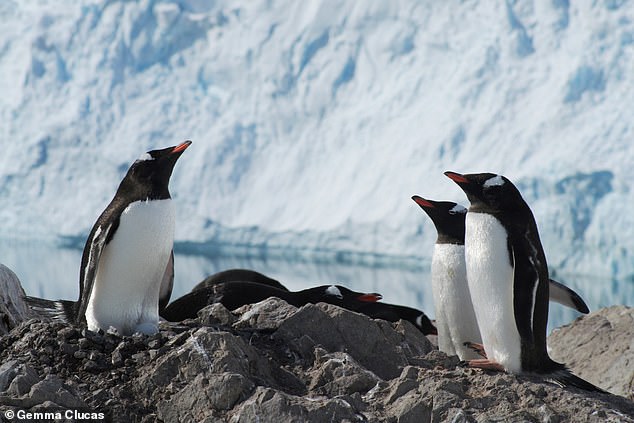 Southern Gentoo (P. ellsworthi) live on Antarctica itself, as well as on the South Shetland Islands – they are the most southernly of the Gentoo species 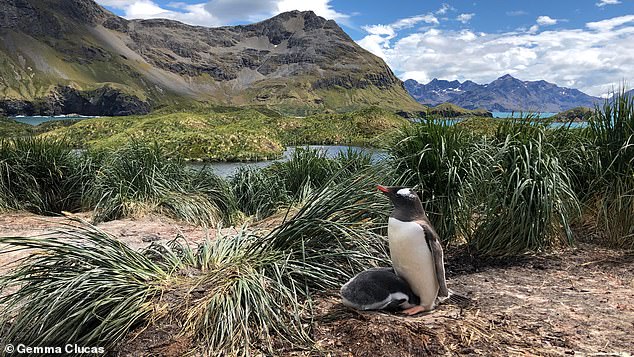 The study examined the genomes of Gentoo penguin populations living in four distinct regions around the world, to better understand their differences.

They then used the data they gathered by studying the birds and their genome to develop a new ‘evolutionary tree’ to place each species.

This data, along with measurements of museum specimens from each of the populations, showed clear physical and genetic differences between them.

Dr Jane Younger, study author, said they are not only genetically distinct, but also have clear physical differences. 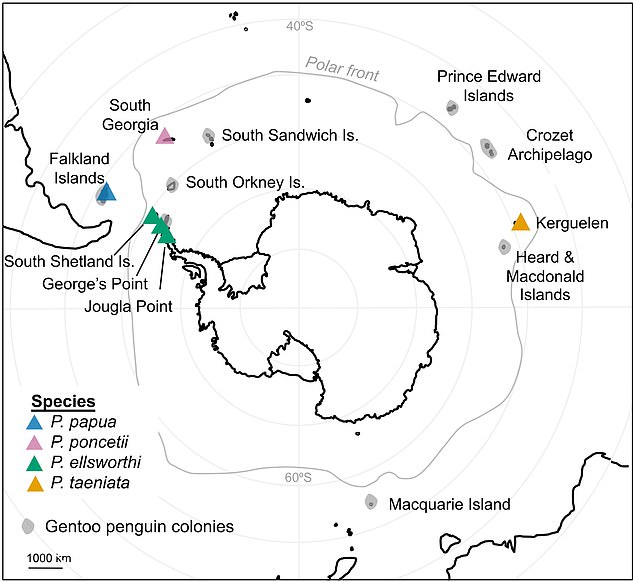 Gentoo penguin colonies can be found on Antarctica as well as in surrounding islands. Researchers believe there are four distinct species as indicated by the coloured triangles

‘Gentoos tend to stick close to their home colonies, and over hundreds of thousands of years have become geographically isolated from each other to the point where they don’t interbreed with each other,’ Younger explained.

This is despite the fact the birds could easily swim the distance that separates them.

‘The four species we propose live in quite different latitudes,’ explained Younger, ranging from further north of Antarctica to islands close by the continent.

For example P. ellsworthi lives on the Antarctic continent itself, whereas P. poncetii, P. taeniata and P. papua live further north where conditions are milder.

This means that it is ‘not that surprising that they have evolved to adapt to their different habitats,’ Younger said. 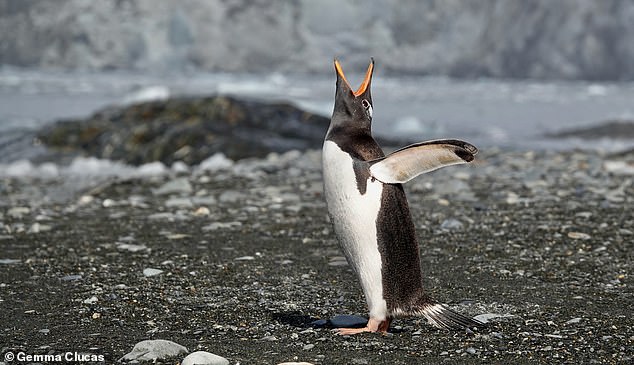 While the South Georgia Gentoo are in warmer climates, it is still cold. Researchers say they could easily swim to other nesting areas but opt to remain with their own group 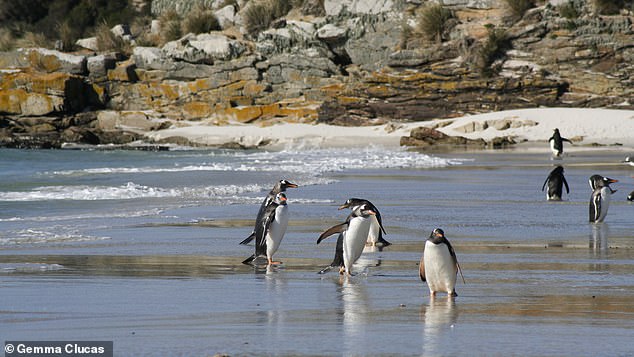 Northern Gentoo (P. Papua) are found almost exclusively in the Falkland Islands. There are no obvious differences between the species and identification requires a trained eye

Josh Tyler, a PhD student involved in the study said to the untrained eye the four species look very similar – but there are distinctions between them.

‘When we measured their skeletons we found statistical differences in the lengths of their bones and the sizes and shape of their beaks,’ Tyler added.

‘It’s a similar story to giraffes, which were revealed in 2016 to be four genetically distinct species.’

The scientists say that defining the populations as four separate species gives conservationists a better chance of protecting their diversity. 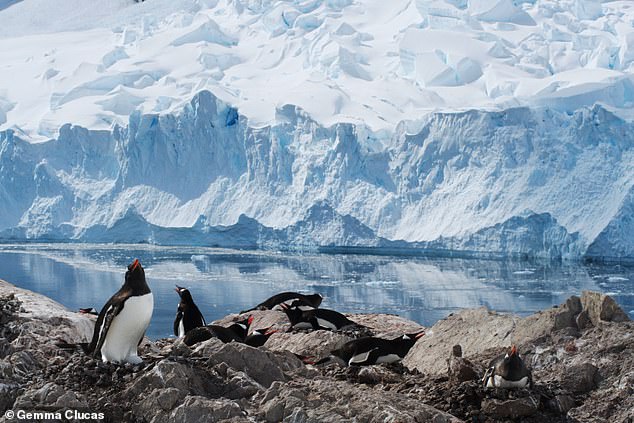 The Southern Gentoo are adapted for the most extreme cold environments. While they originated as one species, over hundreds of thousands of years of separation without any interbreeding they have slowly changed and adapted – physically and genetically

This is because if there is a decline in one of the groups, it will change the threat status as defined by the IUCN Red List.

‘Currently Gentoo penguins are fairly stable in numbers, however there is some evidence of the northern populations moving further south as the climate gets warmer, so we need to watch them closely,’ Dr Younger added.

An international committee of scientists will review the proposed changes and assess all the evidence in the scientific literature before accepting or rejecting the reclassification of Gentoo as four distinct species of penguin.

Their work is published in the journal Ecology and Evolution.

WHAT DO WE KNOW ABOUT GENTOO PENGUINS?

Adults weigh 11 to 17lb (five to eight kg) but how heavy they are depends on the phase in their annual cycle.

Males tend to be larger than females but the difference can be difficult to see.

A bright red-orange bill and conspicuous white eye patches make both adult and juveniles easily distinguishable from other species of penguin.

Gentoo penguins have a large geographical range as they breed on many sub-Antarctic islands and on the Antarctic Peninsula.

The largest populations of gentoo penguins are found at the Falkland Islands, South Georgia, and the Antarctic Peninsula.

With a total breeding population of approximately 387 000 pairs, gentoo penguins are the least abundant of the penguins found on the sub-Antarctic islands.

In their southern range, especially around the Antarctic Peninsula, gentoo populations may be increasing.

However, they may be decreasing in the southern Indian Ocean.

Crypto prediction market explodes due to the US elections

Why Amazon, Apple Peloton and Zoom won 2020, while others like Quibi lost big

Cosmos (ATOM) price could gain over 20% in October

Asian drug lord Tse Chi Lop was arrested in the Netherlands on suspicion of large-scale drug...