Georgia count: Trump drops lead to be neck and neck with Joe Biden

Pennsylvania still has hundreds of thousands of votes left to count despite the secretary of state saying results could be returned on Thursday as Joe Biden closes the gap and President Donald Trump loses a legal bid to stop ballot counting in Philadelphia.

Pennsylvania is among a handful of battleground states Trump and Biden are narrowly contesting as they seek the 270 electoral votes needed to win the presidency.

‘We’re winning Pennsylvania by a tremendous amount. We’re up 690,000 votes in Pennsylvania. These aren’t even close. It’s not like, “Oh, it’s close,” Trump said during an appearance at the White House.

But by Thursday evening Trump’s lead had slipped to about 26,319 votes, as mail in ballots from across the state continued to be counted. The late counted ballots were overwhelming in Biden’s favor. 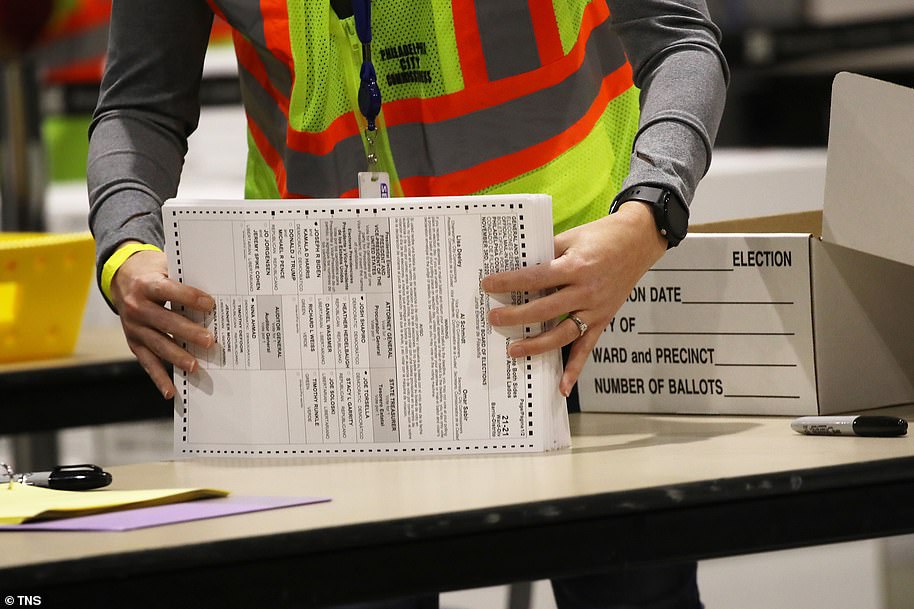 There’s a possibility the race won’t be decided for days and according to MSNBC, there are about 250,000 ballots left to count. If there is less than a half percentage point difference between Biden and Trump’s vote total, state law dictates that a recount must be held.

Democrats had long considered Pennsylvania a part of their ‘blue wall’ — a trifecta that also includes Wisconsin and Michigan — that for years had served as a bulwark in presidential elections. In 2016, Trump won each by less than a percentage point.

Biden, who was born in Scranton, claims favorite-son status in the state and has long played up the idea that he was Pennsylvania’s ‘third senator’ during his decades representing neighboring Delaware. He’s also campaigned extensively in the state from his home in Delaware.

If Biden wins Pennsylvania, he wins the election. Currently, he has 264 votes – including Arizona despite that coming slightly back into play. Even without Arizona, if he won Pennsylvania, he would take the White House.

Trump cannot win on Pennsylvania alone; with 214 electoral college votes, he’d still need to pick up either Georgia, North Carolina, Arizona or Nevada – the four other states where a result is yet to be officially confirmed.

Earlier on Thursday, Kathy Boockvar told CNN’s Jake Tapper that results Pennsylvania could be in by Thursday.

‘I think there’s about 550,000 some odd — you know, plus or minus — ballots that are still in the process of being counted today. Some of those may have already been counted but are not yet uploaded. But yeah, they’re coming in. We’re getting 10,000 here, 20,000 here, counties are furiously at work.’

Results are now expected to be in for Pennsylvania by Friday. 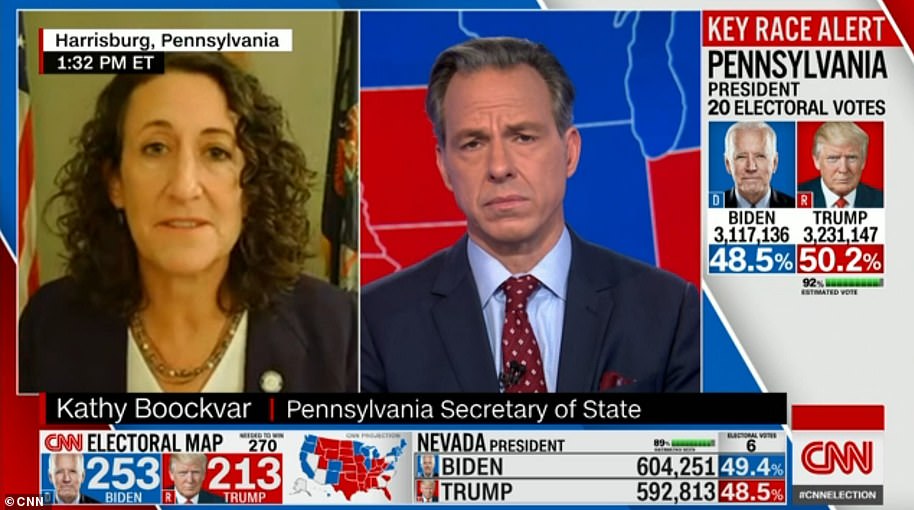 Earlier on Thursday, Kathy Boockvar (left) told CNN’s Jake Tapper that results Pennsylvania could be in by Thursday. ‘I think there’s about 550,000 some odd — you know, plus or minus — ballots that are still in the process of being counted today. Some of those may have already been counted but are not yet uploaded.’ Results are now expected on Friday

Meanwhile, Trump had sued Pennsylvania to undermine whatever election result is returned.

Voting was temporarily halted in Philadelphia and Pittsburgh on Thursday as a result of the legal row. A judge intervened and dismissed the federal motion.

In Nevada, there are only around 51,000 votes left to call before Friday and they say they need that much time. Arizona also says they need until Friday to deliver a result on their remaining 450,000 votes.

The Trump campaign had a brief legal victory in Pennsylvania on Thursday when a judge ruled ballot observers can watch officials count ballots within six feet. Representatives of both campaigns were in the room to watch the counts but at a further distance because of the coronavirus. A county judge agreed with the Trump campaign, but the state Supreme Court rejected it.

The situation in Pittsburgh is complicated by about 30,000 outstanding ballots, where a vendor sent the wrong ballots to voters and had to reissue new ballots with the correct races.

Poll workers now have to examine these ballots to make sure that people don’t vote twice, or, if they sent in the wrong ballot, they didn’t vote in races they aren’t eligible for.

They cannot legally be counted until Friday when Allegheny County, where Pittsburgh sits, swears in a special board to examine these ballots, as required by law

Trump’s team of lawyers have filed lawsuits on multiple fronts – to try to stem the flow of presumably pro-Biden mail ballots into the system, and to try to force greater access for observers so they presumably can challenge more individual ballots.

They scored an initial win Thursday morning, which former Florida Secretary of State Pam Bondi, a Trump backer, brandished at a press conference.

The ruling, by the Commonwealth Court of Pennsylvania, reverses a decision by the Court of Common Pleas of Philadelphia. It lets Trumps observers ‘be permitted to observe all aspects of the canvassing process, within 6 feet, while adhering to all COVID-19 protocols, including wearing masks and maintaining social distancing.’

Trump touted the ‘Big legal win in Pennsylvania!’ on Twitter. But then the Supreme Court of Pennsylvania almost instantly struck it down when Democrats appealed.

The reason of the appeal was not concern over the watching itself, experts said, but because Democrats say Republicans accepted the rules on watching before they went into effect.

Conceding that the rules could be changed after they had been agreed would open the way to more rules being changed, they argue.

That is not the end of the road for the Trump campaign.

The big battle, with a greater potential to affect the count, could come in an effort to challenge an earlier Supreme Court decision allowing the state to count mail-in ballots that come in three days after Election Day.

Conservative justices had indicated that it could get another hearing should these ballots that get counted later prove decisive.

Champion of Champions: Mark Allen beats Ronnie O'Sullivan and calls him a 'bully'

Morocco .. Police foil an illegal immigration operation in the port of Agadir