Georgina Chapman has officially finalized her divorce from Harvey Weinstein.

Chapman filed for divorce in 2017 after dozens of women came forward with accusations of sexual misconduct against the media mogul, 69.

Weinstein was convicted of rape and criminal sexual assault in New York in 2020 and sentenced to 23 years behind bars.

Chapman, 45, has been dating actor Adrien Brody, while she waited for her contested divorce to go through the courts.

This week, it was finalized at Manhattan Supreme Court, where court records show the case is now listed as ‘disposed’, Page Six reports.

Chapman, a British-born designer, filed for divorce in 2017 citing Weinstein’s ‘unforgivable actions’ as the reason for their break-up. 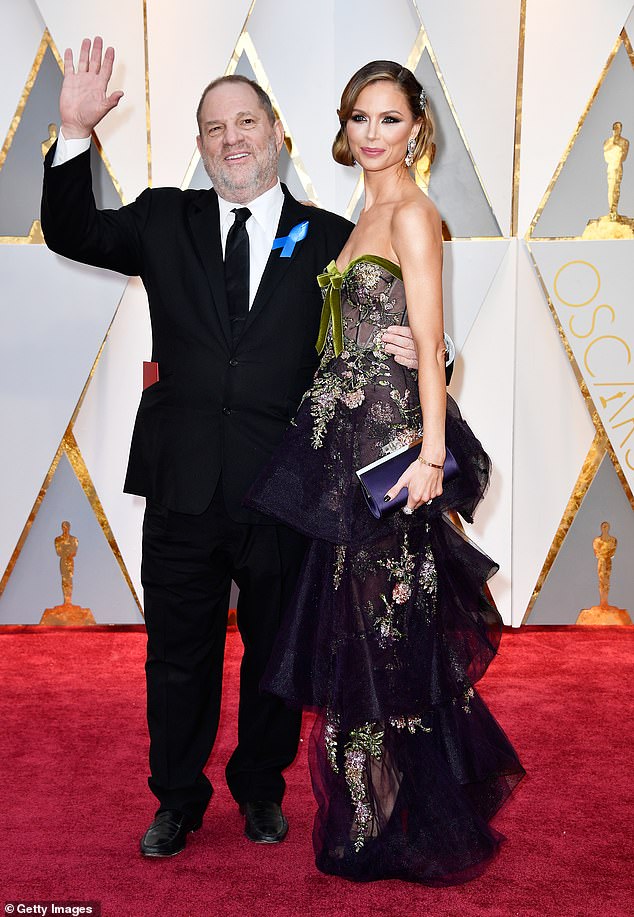 Georgina Chapman has officially finalized her divorce from Harvey Weinstein

Following the split, Chapman took their two children – India, 10, and Dashiell, 8 – from their Los Angeles home and sold the property.

‘My heart breaks for all the women who have suffered tremendous pain because of these unforgivable actions’, she said.

‘I have chosen to leave my husband. Caring for my young children is my first priority.’

At the time, Weinstein said he supported her decision but added he hoped they could ‘rebuild’ their relationship.

‘I am in counseling and perhaps, when I am better, we can rebuild,’ he said.

‘I understand, I love her and I love our children and hopefully, when I am better, I will be in their lives again.’

They reached a divorce settlement in January 2018 that granted Chapman full custody and between $15 million to $20 million.

Chapman has also secured their $15 million West Village townhouse and $12 million Hamptons beach houses, as well as other payments. 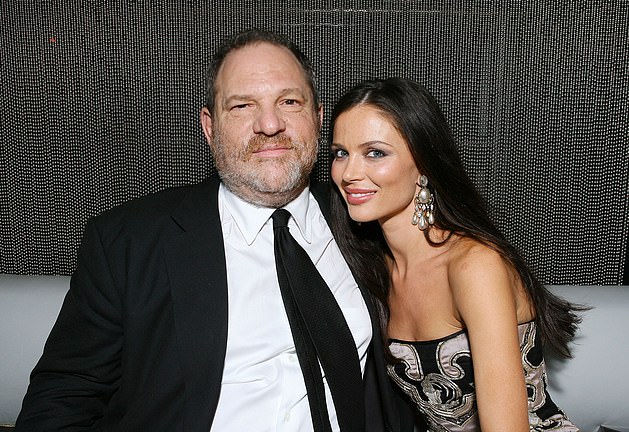 Weinstein and Chapman at the OK! Magazine and Gen Art party in New York in 2008. The couple divorced in 2017 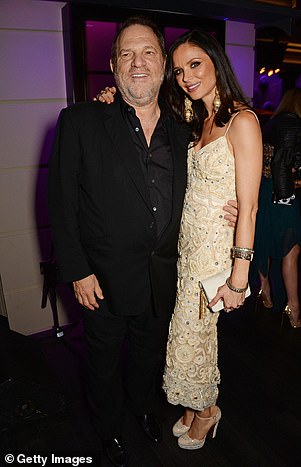 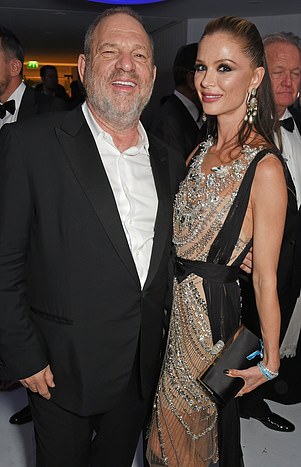 Chapman and Weinstein began dating in 2004, after meeting at a party, and married in Connecticut in December 2007.

The designer kept a relatively low-profile during Weinstein’s rape and sexual assault trial in New York, that concluded with guilty verdicts of sexual assault and rape, but not guilty on predatory sexual assault.

She was not present when he was found guilty by New York City Supreme Court in February 2020.

When asked by Vogue in 2018 if she was ever suspicious about her husband’s behavior, she replied: ‘Absolutely not, never.’

Chapman told Vogue how she felt ‘naive’ when the allegations first broke.

The London-born clothing designer went on to describe how ‘caring for my young children is my first priority’.

She said: ‘And I have moments when I just cry for my children. What are their lives going to be? What are people going to say to them? It’s like, they love their dad. They love him. I just can’t bear it for them.’ 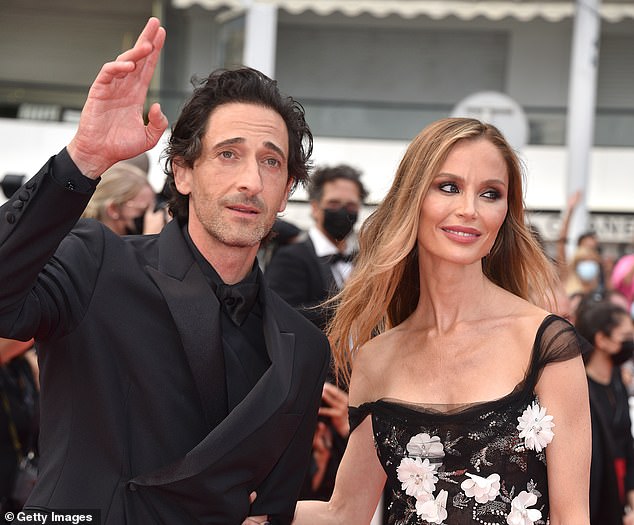 Georgina Chapman has been dating actor Adrien Brody (pictured at the Cannes Film Festival.) She met Brody through Weinstein while she waited for her contested divorce to go through the courts

Chapman and new beau Brody, 48, made their first appearance together on a red carpet at the Tribeca Film Festival last month.

The couple, who beamed for cameras as they walked arm-in-arm, sparked dating rumours in 2019 but only recently confirmed their romance.

A source previously told The Sun the pair originally met ‘properly’ in April 2019 at a swimwear launch in Puerto Rico, where they bonded over cocktails.

Chapman and Brody were seen again on the red carpet at the Cannes Film Festival this week.

The Academy Award winner looked completely at ease alongside his leading lady as they walked the red carpet on the seventh day of events on the French Riviera.

The couple have also been seen out with Chapman’s two children. 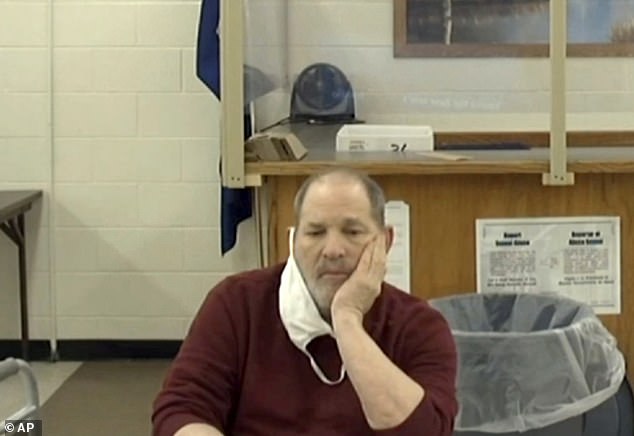 Weinstein is expected to be in Los Angeles later this month, where he is said to stand trial on further sexual assault charges.

A judge in Erie County, New York, ordered the extradition to Los Angeles, over Weinstein’s objections, with the disgraced producer expected in California by mid-July.

His legal team has filed motions in Los Angeles to delay the extradition, ‘until he can receive the medical care he desperately needs in New York.’

In 2020, Weinstein was given 23 years behind bars for third-degree rape and criminal sexual assault for incidents involving two women, Jessica Mann and Mimi Haleyi.

His intense trial in New York City was watched by the world and was a symbolic victory for the #MeToo movement.

He has always denied misconduct and said during his sentencing that he sympathized with men who he feels have been unfairly vilified by the movement.

Weinstein was only convicted of assaulting two women but he has been accused of raping and assaulting dozens more.

Prosecutors tried to bring charges against him which related to other victims, but a series of legal blunders and investigative mistakes led to them being dropped.

His landmark trial however brought in other women who said he’d abused them.

They testified about their alleged experiences, and were hailed as heroes for it.

Mann testified that Weinstein raped her in a New York City hotel room in 2013. Haleyi said he forcibly performed oral sex on her in 2006 while she had her period.

The company released some of the biggest independent box office successes of the 1990s, including ‘Pulp Fiction’ and ‘Shakespeare in Love,’ for which Weinstein won an Academy Award.

As he racked up success in Hollywood, rumors of his coercive sexual behavior became punchlines in primetime sitcoms and comedians’ routines.

Holidays to Spain are back on for thousands of British sunseekers, with ministers set to axe the controversial 'amber-plus'...

Tyson Meals stated it will require its 120,000 employees to get the COVID vaccine after its meatpacking vegetation have...

Aspiring beekeepers can get free provides by means of Virginia program

CHESAPEAKE, Va. - Life is buzzing as of late for Chris and Lawrence Wynn.As empty nesters, the Chesapeake couple...

PORT ST. LUCIE, Fla. — A Treasure Coast animal hospital is hoping to place an finish to whoever has...